ABSTRACT: Type 2 diabetes mellitus (T2DM) is a chronic disease, and most patients ultimately require two or more anti-hyperglycemic drugs along with lifestyle changes to achieve and maintain glycaemic control. Sodium-glucose co-transporter 2(SGLT2) inhibitors, such as Dapagliflozin, are the newest class of antidiabetic drugs approved for the treatment of T2DM. Dapagliflozin is a highly selective SGLT2 inhibitor that decreases glucose reabsorption by kidneys and thus lowers blood glucose by increasing glucose excretion in urine output. Dapagliflozin effectively improves glycaemic control by increasing the renal excretion of excess glucose. In clinical trials, dapagliflozin has been well-tolerated and safe to be administered to the major population. It has additional benefits of weight loss, low risk of hypoglycemia, reduction in blood pressure, and cardiovascular benefits. Dapagliflozin can be administered as monotherapy on in combination with other antidiabetic drugs. Thus, Dapagliflozin offers a novel treatment option for type 2 diabetes mellitus with additional benefits.

INTRODUCTION: 1, 2 Type 2 diabetes affects millions of people worldwide, and India is suspected of being the world’s diabetes capital with 72.94 million cases in 2017. Metformin is considered a first-line treatment for type 2 diabetes, followed by sulfonylureas. Despite a large number of drugs already being available for the management of hyperglycemia in T2DM, these glucose-lowering agents are not adequately effective in maintaining long-term glycaemic control in the majority of patients. Furthermore, most anti-hyperglycemic agents are associated with adverse events such as hypoglycemia and/or weight gain, which exert counterproductive effects and hamper adherence to treatment. Thus, there remains a medical need for improving pharmacological therapy of T2DM.

Inhibitors of sodium-glucose co-transporter type 2 (SGLT2) are new glucose-lowering agents with an insulin-independent mode of action. They specifically target the kidney by blocking the reabsorption of filtered glucose, thus leading to increased urinary glucose excretion, especially when hyperglycemia is present. This mechanism of action holds promise for patients with T2DM not only in terms of improvements in glycaemic control along with a limited risk of hypoglycemia but also has potential benefits of weight loss due to increased glucosuria and reduction in arterial blood pressure associated with the osmotic effect. SGLT2 inhibitors may be used as monotherapy or in combination with any other glucose-lowering agent.

SGLT2 Inhibitors Development: SGLT2 inhibitors or gliflozins development was initiated from Phlorizin, a naturally occurring glucoside which was known to produce renal glycosuria along with blocking intestinal glucose reabsorption. Phlorizin, when isolated, showed potency but was a non-selective inhibitor of SGLT1 and SGLT2 proteins. Due to the poor oral bioavailability, it was not used in humans, but it played an important role in the development of other SGLT2 inhibitors 3.

The first SGLT2 inhibitor to be marketed in the US as canagliflozin (Invokana, Janssen), launched in 2013 and later that year the American Association of Clinical Endocrinologists (AACE) algorithm was updated to include SGLT2 inhibitors, stating they could provide a therapeutic alternative in patients with T2DM in whom metformin is not tolerated or otherwise contraindicated.

Dapagliflozin as an SGLT2 Inhibitor: Dapagliflozin was approved for maintaining the blood glucose levels in patients having type 2 diabetes, apart from being hypoglycaemic it has additional benefits of reducing body weight and blood pressure which is useful in patients suffering from obesity and hypertension along with diabetes 5, 12. Ongoing clinical trials regarding the cardiovascular benefits of Dapagliflozin are depicted in Table 2. Dapagliflozin is a relatively new entrant in anti-diabetic therapy, and there are a number of trials going on worldwide regarding its additional benefits and safety. 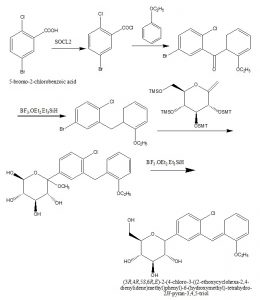 Dapagliflozin Pharmacodynamics: 8 SGLTs, a family of membrane proteins responsible for the transport of glucose, amino acids, and other substances in the proximal renal tubule and the intestinal epithelium in kidneys. Almost all of the glucose filtered daily in the glomeruli of healthy adult kidneys is reabsorbed via a complicated process involving various transport mechanisms. The SGLT2 protein co-transports sodium and glucose across the brush border membrane of the proximal renal tubule into the tubular epithelial cells; a process is driven by the sodium gradient between the tubule and the cell, thereby it facilitates secondary active transport of glucose. Glucose is then passively reabsorbed from the epithelial cells into the interstitium by a glucose transporter protein. The main role of SGLT1 is glucose absorption in the gastrointestinal tract, but it also accounts for approximately 10% of glucose reabsorption in the proximal tubule. SGLT2 is a crucial protein that is majorly responsible for 90% of the kidney’s glucose reabsorption.

Dapagliflozin is a competitive and highly selective inhibitor of SGLT2, resulting in decreased renal reabsorption of glucose and increased urinary glucose excretion, thereby reducing blood glucose levels by a mechanism that is independent of the action of insulin and sensitivity of the cells to uptake insulin. Therefore, dapagliflozin is also suitable for patients who have decreased functional pancreatic cells or suffering from pancreatic insufficiency. 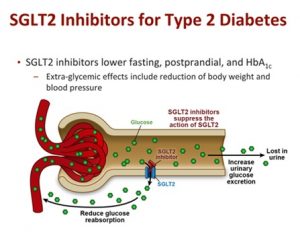 FIG. 3: MECHANISM OF ACTION OF DAPAGLIFLOZIN

Distribution: Dapagliflozin is a highly protein-bound drug; protein binding of dapagliflozin is approximately 91% and is not altered in patients with renal or hepatic impairment.

Metabolism: Metabolism of dapagliflozin is majorly by UGT1A9 and minorly by CYP. A primary metabolite is 3-O-glucouronide, which is an inactive metabolite.

Add-on Combination Therapy with Metformin: After conducting the 24-week placebo-controlled study on 546 patients with T2DM having inadequate glycaemic control (HbA1c ≥7% and ≤10%), statistically significant improvements in HbA1c and FPG were observed along with a reduction in body weight compared with either of the monotherapy treatments 21. Considerable changes in systolic blood pressure relative to placebo plus metformin with dapagliflozin plus metformin were also there.

Add-on Combination Therapy with Insulin: A total of 808 patients having T2DM with inadequate glycaemic control (HbA1c ≥7.5% and ≤10.5%) were involved for a 24-week study to evaluate Dapagliflozin as an add-on to insulin. The study included 50% of the patients on insulin monotherapy and 50% on one or two other anti-diabetic drugs along with insulin 21. Dapagliflozin provided improvement in HbA1c and reduction in body weight compared with placebo resulting in a reduction of mean insulin dose.

Add-on Combination Therapy with a Sulfonylurea: Trials were conducted on 597 patients having T2DM with inadequate glycaemic control (HbA1c ≥7% and ≤10%) in 24-week study and glimepiride along with dapagliflozin was evaluated 21. In combination, significant improvement in HbA1c, FPG, and 2-h elevated postprandial glucose (PPG) were observed.

Add-on Combination Therapy with a Thiazolidinedione: A total of 420 patients having T2DM with inadequate glycaemic control (HbA1c ≥7% and ≤10.5%) participated in a 24-week study 21. Pioglitazone was utilized as thiazolidinedione in combination with dapagliflozin, improvements in HbA1c, FPG and 2-h PPG along with the significant reduction in body weight was observed.

Add-on Combination Therapy with a Dipeptidyl peptidase-4 (DPP) Inhibitor: Placebo-controlled study involving 452 patients with T2DM having inadequate glycaemic control (HbA1c ≥7% and ≤10%) was conducted for 24 weeks 21. Dapagliflozin in combination with sitagliptin provided significant improvements in HbA1c, FPG and reduction in body weight compared with placebo plus sitagliptin.

Safety and Tolerability of Dapagliflozin: 6, 7 The safety of dapagliflozin as monotherapy and as add-on therapy to existing antidiabetic treatment in patients with T2DM has been evaluated in multiple randomized controlled trials, majority of adverse effects were of mild to moderate intensity. The tolerability profile demonstrated in the short-term studies was maintained consistently in patients receiving long-term dapagliflozin treatment. No substantial adverse effects on serum electrolytes, liver function, or renal function were reported.

Volume-related events, i.e., hypotension, dehydration, and hypovolemia, were infrequent, and none were serious. Numerically higher rates of dyslipidemia with dapagliflozin versus placebo have been reported. There are some reports about patients on SGLT2 inhibitor treatment developing diabetic ketoacidosis.

Urinary Tract Infections: Dapagliflozin and other SGLT2 inhibitors increase the risk of urinary tract infections (UTI), and serious UTIs are reported with dapagliflozin.

Kidney Injury and Renal Impairment: Kidney damage can occur due to dehydration, Dapagliflozin increases serum creatinine level and decreases estimated glomerular filtration rate (eGFR) thus it is not suitable for patients with impaired renal function and patients on dialysis. Patients with an eGFR constantly between 30 and <60 mL/min/1.73 m2 are not recommended dapagliflozin.

Hypotension: Symptomatic hypotension occurs with dapagliflozin due to intravascular volume contraction. Elderly patients, patients with impaired renal function, and those on loop diuretics should assess correct volume status before initiating the drug.

Bladder Cancer: Dapagliflozin should not be used in patients with active bladder cancer or with a history of bladder cancer as an imbalance in bladder cancers was observed in clinical trials. Although there is insufficient data regarding the drug’s effect on pre-existing bladder tumors, but caution has to be taken.

Fournier’s Gangrene: This is a life-threatening disease that has been reported in patients receiving SGLT2 inhibitors, including dapagliflozin. Patients having pain or tenderness, swelling in the genital or perineal area along with fever, should be assessed and discontinue the drug. This adverse drug reaction is rare, but cases reported had serious outcomes, including death.

Hypoglycemia: Hypoglycaemia is usually not associated with dapagliflozin but may occur if it is coadministered with insulin or other anti-diabetic drugs.

Renal Impairment: Dapagliflozin acts by inhibiting SGLT2 proteins present in the kidney therefore, adequate functioning of the kidney is required for the efficacy of the drug. Patients having mild to moderate renal impairment had acceptable effects with higher systemic exposure of dapagliflozin, but dapagliflozin is contraindicated for patients with severe renal impairment, end-stage renal disease, and patients on dialysis.

Lactation: Dapagliflozin is not recommended during breastfeeding since human kidney maturation occurs during the first two years of life, there is a risk of under developing kidney of the infant

Pediatric and Geriatric Use: Safety and efficacy data have not been established for the pediatric population. For the geriatric population, no dose adjustment is required based on age, but renal impairment was observed as an adverse reaction in this population.

CONCLUSION: Diabetes is still a worldwide challenge in spite of various anti-diabetic drugs available in the market. Continuous research is in progress to discover newer drugs that can provide better glycaemic control. SGLT2 inhibitors like Dapagliflozin are effective in maintaining better glycaemic control in patients on other anti-diabetics but with uncontrolled blood glucose levels. With its additional benefits like reduction in body weight and hypotension, it is favored over other available anti-diabetics. Dapagliflozin has shown improvement in cardiovascular function as well and is beneficial to patients suffering from cardiovascular disease, but more study and conclusive data are required before it is recommended for this indication.

CONFLICTS OF INTEREST: None Declared