ABSTRACT: This study aims to utilize natural palm oil in the formulation of liposome and evaluate its stability and degradation via the 1H NMR technique. In this study, the conventional method was used to prepare liposome consisting 0, 5, 10, 15, 20 and 25% of palm oil in their structure, and the liposome were characterized in vitro afterwards. The chemical degradation of liposome in the presences of blood component was detected using 1H NMR after incubation period of 2 hours, one day and one week. According to 1H NMR spectrums, samples that lack palm oil or those exceeding 15% palm oil concentration underwent decomposition in the first 2 hours, while samples that were loaded with 5,10 and 15% or palm oil showed no such degradation. However, after being incubated for a day with serum component, the samples loaded with 10 and 15% palm oil remained stable and did not succumb to degradation. It can be surmised that this approach is a viable analytical concept based on the chemical characteristics and the stability of liposomal drug carriers, which complements that of conventional analytical techniques.

INTRODUCTION: Liposomes are utilized as a drug delivery component, and are used to treat various illnesses, infections, cancers, and genetic pathologies 1-3. Liposomes are made up of two heads, one hydrophilic while the other hydrophobic; which makes them capable of delivering drugs with various physicochemical properties 4-5. They can also be developed to transport and transfer toxic substances and drugs that have poor solubility, biologically active materials, and vaccines to enhance their pharmacological functions 6-8.

Liposomes are also a potential carrier for controlled drug release of tumors’ therapeutic agents and antibiotic, for gene and antisense therapy through nucleic acid sequence delivery, immunization through antigen delivery, and for anti-Parkinson medications 9-12. Palm oil is made up of saturated fatty acid possessing antioxidant properties due to presence of certain components, such as carotenes, tocopherol, tocotrienols, terpenoids and flavonoids; it has the capacity to be used in pharmaceutical products on top of its nutritional advantages. The antioxidants in palm oil are thought to resist decomposition of lipids, which naturally protect vesicles from deterioration in the presence of both oxygen and heat and stabilize liposomes structure respectively 13-17.

This study aims to utilize palm oil as a stabilizing agent for liposome, which will in turn help enhance its physical and chemical stability in its function as a drug delivery device.

In the previous decade, pharmaceutical researchers utilized biophysics to evaluate liposomal dosage forms. Liposome consisting of various percentage of palm oil were prepared and characterized, while oxygen and heat accelerate the interface interactions between liposome and serum components. The stability of vesicles was evaluated after 2h, one day, and one week of incubation periods using the 1H NMR technique 18.

Method: as it is shown in Table 1, six formulations of liposome with the different ratios of PC and palm oil were prepared using the conventional method 19-20. Each formulation was made up of CH with varying amounts of PC and palm oil. The lipid components were dissolved in chloroform:methanol mixture of (2:1, v/v) in a round-bottom flask. The solvent was removed under vacuum conditions using a rotary evaporator (Rotavapour R-124, BÜCHI) at 50°C and 50 rpm. After a thin lipid film begins to form in the interior of the flask, the system was purged with nitrogen to completely remove any remaining organic solvents. The lipid film was hydrated in 10 ml phosphate-buffered saline (PBS, pH 7.4) and sonicated for 15 min in a bath-type sonicator (Sonicor). The liposomes were allowed to form at room temperature and refrigerated overnight after the fact. The final mixture was then filtered through a syringe filter (0.45 μm).

The formation of liposomes was observed with a transmission electron microscopy (TEM). Samples were prepared by applying a drop of mixture to a carbon-coated copper grid and left for a minute to allow some of the particles to stick onto the carbon substrate. After removing the excess dispersion using a piece of filter paper, a drop of 1% phosphotungstic acid solution was applied for a minute and air-dried. The samples were then viewed using a TEM (ABFETEM Leo 9112) 20-21.

The value of Zeta Potential (ZP) defines the stability of particulate systems, due to the fact that it measures the repulsive forces between particles. Particles having ZPs of less than -30mV or more than +30mV are usually regarded as stable 22. The ZP values were obtained by inserting each sample into the cell attached to a zetasizer.

Degradation study of liposome by 1H-NMR:

100mg liposome per formulation was weighted separately and added to 10ml RPMI 1640 with 10% FBS plus 1ml Penicillin G. Then, the mixture was incubated at 370C in the presence of atmospheric oxygen for 2hrs, one day, and one week, respectively. After incubation, acid-base treatment was conducted in order to improve the separation of basic extracts. First, NaOH 0.1N was added until the mixture arrives at a basic pH, then the reaction products were extracted with Ethyl acetate and Diethyl ether (60:40, v/v). The aqueous and organic phases were then separated. The organic phase, which has a basic and non-ionizable component, was washed with 10ml HCL 0.1N, then the aqueous and organic phases were re-separated, with the organic phase being dried over Na2SO4 and then concentrated. Consequently, the serum component and lipoprotein extraction remained in the interphase. The aqueous phase that contains acid ionizable substances was washed with 10 ml HCL 0.1 N, then ethyl acetate and diethyl ether (60:40,v/v) was added as well. The organic phases were separated, dried over Na2SO4, and concentrated. 1H-NMR measurements were performed at room temperatures using CHLOROFORM-D (CDCL3) as a solvent 18.

Liposome formation and morphology: According to the TEM images in Fig.1, Large unilamellar vesicles (LUVs) were formed in all of the formulations. FI and FII were morphologically spherical although FIII and FIV showed ellipsoidal formation. While the morphology of liposomes changed significantly at the highest ratio of palm oil in FV and FVI. TEM images in Fig. 1 shows the fine formation vesicle of FI and FIII, while in FIV, as the ratio of palm oil was increased to 20%, deformed vesicles were discovered19-21.

As can be seen in Table 2, all liposomes have a mean particle size between 340-450nm, which confirms the figuration of LUVs. FV & FVI demonstrated the smallest size, whereas FIII & FIV were among the largest. Considering the ZP value of liposomes, and since particles containing ZP ≤-30mV or ≥+30mV are typically more stable 22, only FIII & FIV liposome showed satisfactory ZP values in both fresh mixture and after 30 and 60 days incubation at -4 0C.

Phosphatidylcholin, with its lipid bilayer structure, is the main compnent of any type of liposome. However, its poor stability and high tendency to  oxidize causes the degradation and depreciation of vesicles 23. Since oxygen and heat accelerate  degradation, signals from this lipid (Fig. 2) was used as a reference to compare the degradation of formulations and intraction of vesicles with the serum after 2hrs, one day, and one week of incubation with serum component. 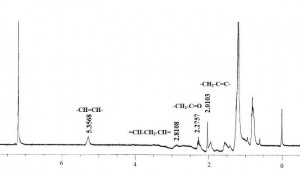 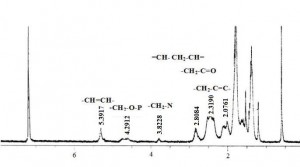 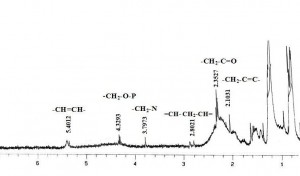 Overall, replacing various percentage of palm oil showed a variety of changes in the characteristics of the vesicles. In FI liposome possessed fine formations, although they show poor ZP values and fast degradation, due to early hydrolysis of PC during incubation with the serum component. In FII liposome, fine shape observed plus improved the steadiness of vesicles during the 2 hours incubation but FII vesicles still have poor ZP and high degradation after one day incubation with serum component. Impressive results were obtained from FIII and FIV liposome, showing superior formation and satisfactory ZP values with advanced stability toward oxidation and hydrolysis during 2 h incubation and also the least degradation after one day and one week incubation compare with other formulations. FV & FVI formulations were enabled of preparing qualified liposome due to the lack of PCs. Although FV & FVI showed higher ZP value compare to FI and FII, they didn’t have good shape and formation which lead to fast hydrolysis of them during incubation with serum component.

CONCLUSION: This study replaces percentages of PCs with palm oil in the preparation of liposome, and this change was carefully vetted. Although the use of PC for making liposome seems to be necessary, palm oil seems to be a viable replacement.  The addition of controlled amounts of palm oil would result in the optimization and stabilization of liposome, along with helping it avoid both oxidation and hydrolysis. TEM images confirm the formation of LUV under loading with palm oil, and liposomes loaded with 5, 10 and 15% palm oil showed well-defined morphologies compared with vesicles consisting of 20 and 25% palm oil. Zeta potential values showed that 10 and 15% loading of palm oil into liposome would increase the ZP value in fresh and incubated vesicles additionally. Degradation of LUV was studied using 1H-NMR to check for oxidation and hydrolysis of PC during incubation with serum component. 1H-NMR is a qualified analytical technique to accomplish the stability and degradation study of liposome in serum component.

Looking at the 1H-NMR spectrums, vesicles with 5, 10 & 15% palm oil did not decompose in the first 2 hours, although after a day; only the liposomes loaded with 10 and 15% of palm oil remain less affected by oxidation and hydrolysis. However, after a week of being incubated, all of the samples consistently degraded.

ACKNOWLEDGMENTS: This research work was funded by ERGS grant ERGS/1/2011/SKK/ CUCMS/03/3, and supported by Cyberjaya University Collage of Medical University (CUCMS) and University of Malaya (UM).