ABSTRACT: About 70 middle aged (20 - 45 years) patients, including 40 males and 30 females, operated at Base Military Hospital, Meerut Cantonment Board, Meerut (India) developed typical symptoms of pus formation at surgical sites and opening of sutures after 30 - 45 days. To investigate the causative pathogen and source of infection, various samples were collected from wounds and various sites of Operation Theatre. The samples were processed on culture media including nutrient agar, McConkey agar and Lowenstein-Jensen’s medium (LJ medium). To identify the pathogens, Gram’s and acid fast staining of the smears of samples and cultures obtained on different media, were carried out. Acid fast bacilli were observed after 3 - 5 days of incubation on LJ medium. The wound samples showed the prevalence of Mycobacterium chelonae and acid fast rods.

These infections are generally classified as being early, delayed and late when incubation period is within three months, three months to two years and greater than two years, respectively 2. There are specific criteria for distinguishing superficial from deep incisional or organ space infections, including time to infection and features such as purulent drainage and fever 3. Rennert - May et al., (2016) studied the use of local surveillance system after primary hip and knee arthroplasty to characterize post-operative infections of surgical sites for prompt and efficient treatment to avoid repeated surgery 4. In 2011, approximates 1, 57, 500 cases of surgical site infections (SSIs) have been reported in United States of America 5. It is a cumbersome post-operative complication for both patients and surgeons.

Due to re-entry and prolonged hospitalizations, it weighs on health care systems which are nuisance for both patients and their families 6, 7, 8. It is most occurring infection, accounting for more than 31% patients affected in hospital and resulting in increased duration of hospital stay and resource utilization 9, 10. A Bayesian network coupled with natural language processing (NLP) has the potential to be used in real-time SSI surveillance 10.

Recently, Gonzalez et al., (2017) reported that longer operation time, age, hirschsprung disease, and cardiac risk factors are associated with an increased risk for SSI after stoma closure i.e. Patients who developed SSI had significantly longer time in the operating room, anesthesia times, total operation times and lengths of stay 11. In addition to these pathogenic microbes, some non-tuberculoid mycobacteria (NTM), which include Mycobacterium chelonae and M. fortuitum is reported as major cause of post-operative infections. They have been the cause of a variety of clinical presentations in cutaneous disease but rarely cause disseminated infections 12. The tap water is considered as the direct or indirect cause of frequent contamination of wounds 13. Isolation of NTM from various sites and procedures viz. skin and soft tissue infections after laparoscopic procedures were reported from India 14, 15, 16. An attempt has been made to investigate the delayed post-operative surgical site Infection, source and causative agent in Military Hospital, Meerut.

MATERIALS AND METHODS: Military Hospital, Meerut (India) is a 545 bedded busy zonal hospital catering to the needs of army personnel and their families. The hospital was confronted with delayed post-operative surgical site infection. In one and half year span, about 70 patients were affected, which included 40 males and 30 females, majority of them were middle-aged (20 - 45 years) and operated in the same operation theatre. All the patients showed typical symptoms of pus formation at surgical site and opening of sutures after 30 - 45 days.

The wound examination revealed mild erythema and indurations with serosanguinous discharge. All patients were found negative for HIV. Pus samples were aspirated and collected from suture sites and used for the isolation of the causative agent which was further identified. In addition to blood and tissue samples, some samples from water (S-1), surface of sterilized surgical instruments (S-2), walls of Operation Theater (S-3) and inlet of air conditioner (S-4) were collected. The samples were processed on nutrient agar, MacConkey’s agar and Lowenstein-Jensen’s (LJ) medium. The plates containing media develop some rapidly-growing colonies, which were sub-cultured and subjected to standard tests for the identification.

RESULTS AND DISCUSSION: Acid fast bacilli were observed in pus/discharge and infected tissue after Ziehl-Neelsen staining of direct smears. Cultures obtained from surface of sterilized instruments, AC duct, ceiling dust and tap water samples have also shown the presence of acid fast bacilli Fig. 2. In addition to acid fast bacilli fungal hyphae were observed in infected tissue samples and in AC duct Table 1. Infections with rapidly-growing mycobacteria (RGM) are rare and most often seen in patients with a compromised immune system 17.

Results of the present study showed a combined infection of atypical Mycobacterium and fungus and their major sources were dust shedding from operation theatre ceiling, instruments kept in stored disinfectant and tap water. All the patients observed have developed localized painless multiple discharging sinuses around the operated site after 4 - 5 week of initial healing. Serosanguinous discharge from the sinuses and granulomatous lesions were reported in dermal layer. Patients were not responding to antibiotics used for acute pyogenic infections but amikacin and clari-thromycin were found to be effective along with vigorous surgical debridement. Additional supplement of antifungal agents like ketoconazole has improved the treatment. Villanueva et al., (1997) had been reported that M. chelonae is susceptible to some antibacterial agents, which are 100% for tobramycin and clarithromycin, 80%, for amikacin 60% for imipenem, 25% for doxycycline and minimum 20% is susceptible for ciprofloxacin 18. Apart from this Vemulapalli et al., (2001) also reported that its infections generally required a long antibiotic therapy and there is no standard duration of therapy 19. 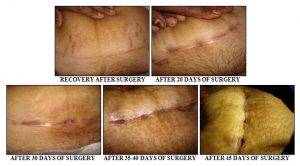 M. kansasii and M. xenopi are the best known slow-growing mycobacteria whereas M. fortuitum, M. abscessus and M. chelonae are well-known rapid-growing mycobacteria (RGM). They are environmental organisms isolated from water, soil and aerosols. They can be cultured in regular culture media, although they need a lower optimal growth temperature (around 30 ºC) 20. Post-operative surgical site infections are common among immuno - compromised patients. M. chelonae known as cold blooded tubercle bacilli were isolated from a turtle is an rapidly growing mycobacterium 21. The tap water is ruled out as the source of surgical site infection during cardiothoracic surgery and reconstructive surgery 22 Fig. 1.

Therefore, the current investigation shown that, the most probable source of infection could be inadequate sterilization process such as contaminated water being used for washing instruments, over-dilution of disinfectant and storage of disinfectant for long time. Dusts are major cause which is continuously shedding from the roof. Water used for hand washing should be of aqua guard. For dilution, RO or distilled water should be used. All type of clothing used during operation should be autoclaved or sterilized with ethylene dioxide chambers. After fixing above problems, use of unsterilized clothing may be hazardous as it is being used in many ways with sterilized objects. Change of water quality will help in that a lot. In addition to this, equipments should be autoclaved regularly. Autoclave should be placed in such a way that the instrument should not be exposed to polluted air for long. Disinfectant should be changed regularly and its effectiveness should be checked microbiologically in regular interval.

CONCLUSION: The study suggest that strains of Mycobacterium chelonae found in various sites like water other may cause postoperative surgical site infection in patients. The study suggests that consortia of Aspergillus sp. and Mycobacterium chelonae are responsible for the complication and treatment should target these typical low profile pathogens instead of famous pathogen like Staphylococcus aureus.

ACKNOWLEDGEMENT: The authors are highly thankful to Col P. Jaiswal for allowing and helping us to collect the samples from the hospital and Prof. P. K. Sharma, for providing the lab facility of the Department of Microbiology, CCSU Campus. In addition to this we are thank full to I. Hussaain and A. Kumar for helping in the work at various level.