ABSTRACT: Theoretical studies on two previously synthesized 3-((2, 4-dinitrophenyl) amino)-5-methyl-2-phenylimidazolidin-4- one (1) and 3-((2,4-dinitrophenyl) amino)-2-phenylimidazolidin-4- one (2) were carried out using the Density Functional Theory method. The geometrical parameters of the molecules in the ground state was optimized at the DFT-B3LYP level of theory and ab initio method using 6-31G (d,p) basis set. Bond angle and bond length were calculated from optimized geometry. The calculated bond angle and bond length indicated that both the molecules are planar. Various quantum chemical parameters such as dipole moment (μ), energy difference (ΔE), softness (S) and global hardness (η), highest occupied molecular orbital (EHOMO) and lowest occupied molecular orbital (ELUMO) has been calculated in order to elucidate the adsorption and corrosion inhibition behavior of the molecules. The anticorrosive ability of the molecules was also established.

INTRODUCTION: Nitrogen-based heterocyclic chemistry is an important and unique class among the applied branches of organic chemistry, with a significant amount of research dedicated to the development of novel molecules and composites. These molecules have received increasing attention over the past two decades. They contributed to the development of numerous organic synthesis protocols and found abundant applications in the chemical sciences 1, 5. Many N-heterocyclic compounds are broadly distributed in Nature.

Possess physiological and pharmacological properties and are constituents of many biologically important molecules, including many vitamins, nucleic acids, pharmaceuticals, antibiotics, dyes, and agrochemicals, amongst many others 6, 10. Moreover, they form an integral part of many pharmacologically active molecules.

Density functional theory (DFT) is one of the important tools of quantum chemistry to understand popular chemical concepts like electronegativity and chemical potential ionization potential and electron affinity etc 11, 12, 13. The electron density-based local reactivity descriptors, local hardness h, 14 local softness s(r) and the Fukui function f (r) 15 were proposed to explain the chemical selectivity or reactivity at a particular site of a chemical system. It has also been shown that local hardness is a reliable intermolecular reactivity descriptor and the local softness and Fukui function are more reliable intramolecular site selectivity descriptors 16, 17 18, 19. Several attempts have been made to evaluate the Fukui function indices. Parr and Yang proposed a finite difference (FD) approach to calculate FF indices, i.e., nucleophilic, electrophilic, and radical attacks 20. Corrosion of metals is a major issue in various industrial fields, resulting in huge economic losses. Several approaches are therefore employed to reduce the corrosion process of mild steel and one of these approaches is the use of corrosion inhibitors.

Organic compounds, which can donate electrons to the unoccupied d orbital of the metal surface to form coordinate covalent bonds and can also accept free electrons from the metal surface by using their anti-bonding orbital to form feedback bonds, constitute excellent corrosion inhibitors. Quantum chemical methods have already proven to be very useful in determining the molecular structure as well as elucidating the electronic structure and reactivity. Quantum chemical studies have been successfully performed to link the corrosion inhibition efficiency with molecular orbital (MO) energy levels for some kinds of organic compounds 21. In this study, we intend to find the theoretical parameters which influence the reactivity of 3-((2, 4-dinitrophenyl) amino)-5-methyl-2 –phenylimida zolidin-4-one (1) and 3-((2,4-dinitrophenyl) amino)-2-phenylimida zolidin-4-one (2) by using Gaussian 09 calculations.

Experimental Details: The compounds under study were prepared in our laboratory and the structures were confirmed with spectral studies 27. The chemical structure of the compounds is shown in Fig. 1.

Computational Details: To obtain stable structures, the geometrical parameters of the ground state were optimized at the DFT-B3LYP level of theory and ab initio method using a 6-31G (d,p)basis set. The molecular geometry was not restricted, and all the calculations (geometric parameters and other molecular properties) were performed by using the Chemcraft molecular visualization program and Gaussian 09 program package on a computing system 22. The optimized geometry corresponding to the minimum on the potential energy surface has been obtained by solving the self-consistent field equation iteratively. The harmonic vibrational wavenumbers have been analytically calculated by taking the second-order derivative of energy using a similar level of theory. The optimized geometrical parameters such as, bond lengths and angles, HOMO, LUMO, dipole moment, the first-order hyperpolarizability (β) electron affinity (EA), ionization potential (IP), dipole moment (µ), hardness (ɳ), softness (S) , absolute electronegativity (χ), electrophilicity index (ω), fractions of electrons transferred (ΔN) and back donation (ΔE) fukui indices and the Mulliken charges were calculated.

The energies of HOMO and LUMO are related to the IP and EA, respectively, in the framework of Koopmans’s theorem. IP= -EHOMO, EA=-ELUMO, χ = (IP+EA)/2, ɳ= (IP-EA)/2. The S is defined as the inverse of ɳ. Chemical potential (µ), which is half of the energy of HOMO and LUMO µ= (EHOMO+ELUMO)/2.  Electrophilicity is a descriptor of reactivity. Ω = µ2/2ɳ. An electronic back donation process might govern the interaction between the metal surface and inhibitor molecule according to the simple charge transfer model for donation and back donation of charges.

If both processes occur, charge transfer to the molecule and back donation from the molecule, the energy change is directly related to the hardness of the molecule. ΔE Back donation = ɳ/4. The ΔE Back-donation shows that when ɳ > 0 and ΔE Back-donation < 0 the charge transfer to a molecule, followed by a back-donation from the molecule, is energetically preferred. It is possible to compare the stabilization among inhibiting molecules since there will be an interaction with the same metal. It will decrease as hardness increases. The fraction of electrons transferred (ΔN) from the inhibitor molecule to the metallic atom was calculated according to Pearson electronegativity scale 23. ΔN= χFe- χinh/2 (ɳFe+ɳinh). Where χ Fe and χ inh denote the absolute electronegativity of iron and inhibitor molecule respectively ηFe and ηinh, denote the absolute hardness of iron and the inhibitor molecule respectively. In this study, we use the theoretical value of χFe=7.0 eV 24 and ηFe = 0 by assuming that for a metallic bulk   I = A 25 because they are softer than the neutral metallic atoms. The optimized geometry for the studied compounds are shown in Fig. 1, Fig. 2. shows the shapes of the highest occupied and lowest unoccupied molecular orbital (HOMO and the LUMO) for these structures, drawn by Chemcraft. 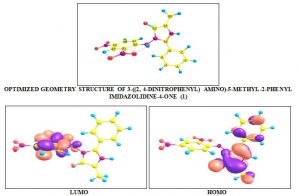 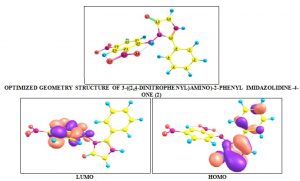 The optimized bond lengths and angles for the thermodynamically preferred geometry determined at B3LYP/6-31G (d,p) levels are represented in Tables 1, 2, 3 & 4  in accordance with the molecule shown in Fig. 1 & 2. In the studied compounds from the bond length, the inner angle and outer angles suggested that the molecule is planar.

Frontier Molecular Orbital Analysis: FMO analysis is a physical property used to determine, ability to absorb light, electronic as well as optical properties of organic compounds 26. In molecular interaction, the highest occupied molecular orbital (HOMO) and lowest unoccupied molecular orbital (LUMO) play the key role. HOMO is the orbital that has the ability to donate electrons, and its energy corresponds to ionization potential (I P.), while LUMO has electrons accepting ability, and its energy corresponds to an electron affinity (EA). FMO analysis was computed with additional keyword pop = full.

The parameters are listed in Table 6. Parr et al., have reported that the frontier molecular orbitals of a molecule decide its physical and chemical properties play an important role in the electric and optical properties; also, the electrophilicity index values increase with increasing chemical and biological activities for the reacting species in a biological system.

As the energy gap decreases, there is a decrease in excitation energy for the excited states, low stability, and hence highly reactive. Here 3-((2, 4-dinitro phenyl) amino)-5-methyl-2-phenylimida zolidin-4-one (1) has the lowest energy gap value, highest chemical potential, and lowest hardness value 27.

The calculated dipole moment of compound 1 is 10.8505, and compound 2 is 11.0354. The very high value of dipole moment results in stronger intermolecular interactions and high reactivity. Values of ΔN show that the inhibition efficiency resulting from electron donation agrees with Lukovit’s study 15. If ΔN < 3.6, the inhibition efficiency increases by increasing the electron-donating ability of these inhibitors to donate electrons to the metal surface. The results indicate that ΔN values are in good agreement with Lukovit’s study. So in the experimental studies also the molecules may act as a good anti-corrosive agent.