ABSTRACT: Objective: To develop a simple, accurate and precise method for the simultaneous estimation of Moxifloxacin hydrochloride (MOX) and Vinblastine sulfate (VIN). Methods: The normal spectrum of VIN and MOX were converted to its second derivative spectrum and the amplitude minima of VIN and MOX were measured at 214 nm and 297 nm, respectively. MOX and VIN solution were simultaneously determined in 0.1M HCl at 297 nm and 214 nm. Results: The amplitude of MOX and VIN were found to be more distinct in 0.1M HCl with compared to water, methanol and 0.1M NaOH (order = 2 and Δλ=1). Linearity was obtained over the range 1-8 μg/ml and 3-24 μg/ml with a lower limit of quantitation of 1.7 μg/ml and 0.4 μg/ml for MOX and VIN, respectively. For each level of samples, inter- and intra-day precision (% RSD) was <2.1% and <2.3%for MOX and < 2.3 and <2.7 % for VIN, respectively. The mean recovery of MOX and VIN were in the range 99.98%-103.1%and 101.03%-104.3%, respectively. The developed method was validated as per ICH guidelines for parameters like linearity, accuracy, method precision, and ruggedness. Conclusion: The results obtained were well within the acceptable criteria. The method can be used for routine analysis of MOX and VIN.

INTRODUCTION: Vinblastine sulfate (VIN) is alkaloids which is one the chief compound of Catharanthus sroseus (Linn.) G. Don (Family Apocynaceae) 1. It has also been used for lymphoma, testicular cancer, choriocarcinoma, breast cancer or Kaposi's sarcoma 2. The most striking effects are produced in Hodgkin's disease. VIN is moderately active clinically against advanced breast cancer 3. VIN works by stopping the cancer cells from separating into two new cells 3. 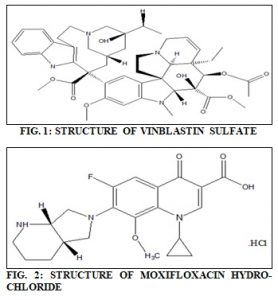 Chemotherapy regimen used in clinical practice are empiric drug combinations 9, the dose prescribed for VIN is 3.7 mg/m2 10-11 and for MXR is 400 mg 12. There are evidence of use of adjunct antibiotics like fluoroquinolones with anticancer drugs enhancing the cytotoxic effects while, at the same time, decreasing chemotherapy-induced pro-inflammatory cytokine secretion from cells, which may be harmful during chemotherapeutic treatment 13, 14, 15. Few spectrophotometric methods 16-21 and High- Performance Liquid Chromatography (HPLC) 22-29 have been reported for the determination of MOX and VIN in single or combined pharmaceutical dosage forms or biological fluids. But none of these methods demonstrate the simultaneous estimation of these two drugs in combination by a derivative method in the pharmaceutical dosage form. A drug which has narrow therapeutic range need regular monitoring of drug plasma concentration 4, 5. In continuation of our previous simultaneous estimation of Moxifloxacin with Doxorubicin hydrochloride, Imatinib mesylate and Vinblastine sulfate by vierodt’s method3, 20-31 in the present paper, second-order derivative UV spectrophotometry was used for the simultaneous estimation of VIN and MOX.

Chemicals and Reagents: MOX was obtained as a gift sample from Alkem Laboratories (Sikkim plant). All reagents employed were of analytical grade ordered from S.D Fine Chem. Ltd. (Mumbai, India). Stock solutions of MOX and VIN (1 mg/ml) were prepared in 0.1M HCl and stored at 2-8 °C. Water used was from Direct-Q3water purification system (Millipore, India).

Selection of Solvent: Individual sample of the pure VIN and MOX was checked for their solubility in a different solvent, i.e., methanol, water, 0.1HCl, and 0.1M NaOH. The molar absorptivity of the respective drug in each of the four solvents was calculated taking the concentration of 5 µg/ml, and corresponding derivative spectrum of the drugs was processed. The solvent showing a distinct and higher amplitude of second derivative spectrum were selected as the choice of solvent for the rest of the experiment.

Preparation of Analytical Solution: A stock solution of VIN and MOX were prepared by dissolving 10 mg of the drug in 10 ml of 0.1M HCl and was stored in the temperature ranging from 2- 8 °C. For each analytical solution of desired concentration, suitable dilution was carried out.

Linearity: The linearity of the method was established by preparing a different concentration of the drug ranging from 1-8 µg/ml and 3-24 µg/ml of VIN and MOX, respectively. The amplitude of absorbance against the corresponding analyst concentration was plotted and slope, intercept and correlation coefficient were determined using linear regression analysis.

Inter-day precision was also carried out similar, but in two different days and the %, RSD was calculated.

Accuracy: The accuracy was evaluated in triplicate by adding a pure drug of MOX and VIN in already analyzed sample solution consisting of 3 μg/ml of VIN and 9 μg/ml of MOX. A known amount of VIN (20%, 40%, and 60%) and MOX (20%, 40% and 60%) standard solutions were added to the already analyzed sample solution and the analysis was carried out. The total amount of drug present was determined by the proposed method, and the % recovery of the pure drug was calculated.

Limit of Detection: Limit of detection was carried out as per ICH guideline. It was determined by using a formula:

Limit of Quantification: Limit of quantification was carried out as per ICH guideline. It was determined by using a formula:

Method Development: A distinct minima of the second order derivative spectrum (Δλ=1) of VIN and MOX was found at 214 nm and 297 nm in acidic (0.1M HCl) solution than in water, methanol, and 0.1 M NaOH. The ratio of the two drugs selected was 1:3 (VIN: MOX). The derivative spectrum of VIN and MOX solution showed enhanced resolution and the bandwidth discrimination as shown in Fig. 3, 4.

Linearity: The calibration curve for VIN was linear over the concentration range of 1-8 µg/ml. The correlation coefficient value obtained was 0.998 with the regression equation y = 01.175x + 0.026. 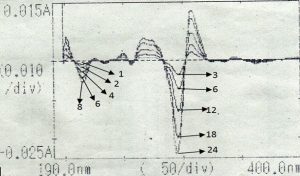 TABLE 1: INTRA-DAY AND INTER-DAY PRECISION DATA OF VIN AND MOX

Accuracy: Recovery studies were performed by the standard addition method. It was performed with a view to justifying the accuracy of the proposed method. Previously analyzed sample was spiked with known amounts of standard VIN and MOX to get three different levels (20%, 40%, and 60%) and the mixture was analyzed by the proposed method. The experiment was performed in triplicate % recovery, mean% recovery and RSD (%) was calculated for each concentration. The method has shown good and consistent recoveries ranging within 99%-103.2% and 101%-104.2% for VIN and MOX respectively, confirming the accuracy of the method, as shown in Table 2.

TABLE 2: ACCURACY DATA FOR THE DETERMINATION

ACKNOWLEDGEMENT: The authors are grateful to the management of the Himalayan Pharmacy Institute for providing excellent laboratory facilities. We are grateful to Alkem Laboratories Ltd., Kumrek, East Sikkim for a gift sample of MOX. We are thankful to Dr. Ankur Gupta, Ex. HOD of Department of Pharmaceutical Analysis and Quality Assurance, HPI for his encouragement and Mr. Jeewan Pradhan, Laboratory Technician, HPI, for laboratory assistance.

CONFLICT OF INTEREST: Declared none.