INTRODUCTION: Oral route is considered the most effective route for the drug delivery. Most of immediate and delayed release systems are delivered by this route only because of its high level of patient compliance 1. Even though, this type of delivery system fails to prevent some disease or symptom of disease 2. The reason for the failure is that some diseases show significant variation in their level during 24 hr which is known as circadian rhythm.

Conventional preparations are not able to deliver the drug according to the circadian rhythm. It is well documented that some diseases like heart rate, blood pressure, rheumatoid arthritis stroke volume, blood pressure, blood flow, body temperature, gastric-pH, cholesterol level, asthma etc. shows time dependency in their symptoms and effect 3.

Time controlled preparation has been developed to control these types of conditions. Pulsatile drug delivery system has been developed to give time dependent release with lag time to control diseases4. Pulsatile delivery system can be formulated by different formulations. Capsule formulation includes OROS soft cap, port, pulsing cap etc. and tablet formulation includes coating by erodible or soluble polymer. Press coated tablet are also known as double compression, compression coating or dry coating tablet. Press coating is advantageous because it does not involve use of volatile solvent, requires short manufacturing time, physical separation of two incompatible material is also possible, mask the bitter of drug, protection of volatile ingredients and colon targeted can also be achieved if sufficient amount of barrier layer is provided.

Press coated tablet is also one of the approach for colon targeting. Colon drug delivery refers to as a targeted delivery of many drugs into the lower gastrointestinal tract, which occurs mainly in the large intestine 5. This site delivery is advantageous to delivery of peptide drugs which requires protection from the gastric environment, prevent first pass metabolism, local and systemic delivery can be done, protection of mucosa from irritation caused by drugs, effective treatment of colorectal cancer, reduce dose frequency and improve patient compliance 6.

Generally a rheumatoid arthritis symptom is high in early morning. Aceclofenac has higher anti-inflammatory action than other NSAIDs Aceclofenac is blocking the action of a cyclo-oxygenase in body7. Cox is involved in the formation of prostaglandins which cause pain, inflammation. Aceclofenac is chemically synthetic. It is BCS class II drug and is probably metabolized by CYP2C9 to the metabolite form is 4-hydroxyaceclofenac and bioavailability is near to 100%.  Peak plasma concentrations levels are reached approximately 1.26 to 3 hours following ingestion. Aceclofenac is highly protein-bound (> 99.7%).

The volume of distribution is approximately 30L. The plasma elimination half-life is 4- 4.3 hours. Aceclofenac has the disadvantage of low solubility due to not being soluble in gastric pH and its intestinal metabolism by CYP2C9 enzyme. Aceclofenac colon targeting is promising due to the low level of this enzyme in the colon than in the small intestine. By formulating the press coated tablet and targeting it to the colon, first pass metabolism of aceclofenac can be avoided. Delivery of drug in the early morning is possible when it is actually required by formulating its press coating tablet using Ethylcellulose (EC) and Hydroxypropylemethyl celluloseK100M (HPMC K100M). HPMC K100M act as hydrophilic layer which swell with time and EC act as a hydrophobic polymer which protects the core tablet so that it remains intact until they reach to the targeted site i.e. colon. Here amount of both polymers must be sufficient so that it gives sufficient lag time to deliver the drug in the targeted area 8-11.

Determination of λmax for Aceclofenac:

Determination of analytical wavelength of Aceclofenac in pH 6.8 phosphate buffers can be done by taking 1 ml from 100 μg/ml standard stock solutions in 10 ml volumetric flask. The volume was made up to 10 ml with pH 6.8 phosphate buffer solution. The resulting solution containing 10μg/ml was scanned between 200 to 400 nm shown in Fig. 1.

A stock solution of pure drug (1000μg/ml) was prepared by accurately weighing 100 mg drug and dissolving it in 100 ml of buffer solution. Different dilutions were made with concentration of 1, 2, 4, 6, 8, 10 μg/ml from stock solution and their absorbances were measured at 273 nm using UV-Visible spectrophotometer shown in Fig. 2.

The core was made of the suitable mixture of powder blends of optimized Aceclofenac, Microcrystalline Cellulose (MCC, Avicel PH-101) and Sodium starch glycolate. All above ingredients were dry blended for 20 minutes followed by addition of Magnesium Stearate. The mixture was then further blended for 10 minutes. The 200 mg of the resultant mixture was then directly compressed using 8 mm punch and die.

Powder blend for press-coated tablet was prepared by dry blending together different composition of the EC and HPMC K100M. These excipients were dry blended in different weight compositions in order to get suitable polymer composition shown in table no 4. A 32 full factorial design was applied to examine the combined effect of two formulation variables, each at 3 levels, and the possible nine combinations of Aceclofenac press coated tablets were prepared. The amount of EC (X1) and the amount of HPMC K100M (X2) were taken as independent variables.

The % drug release 8 hr and % drug release before 6 hr were taken as dependent variables. This composition is dry blended until uniformly blended mixture is obtained. This mixture is then used for the preparation of press–coated tablet using direct compression method.

TABLE 5: COMPOSITION OF THE ALL FORMULATIONS

Press Coated Tablets were prepared by direct compression method. The composition of the core tablet is shown in the Table 2 and as per that formulation; core tablets were prepared using the punch of 8 mm diameter using the rotary tablet processing machine. After the preparation of the core tablet, for coating of those tablets, various proportions of EC and HPMC K100M were taken. Half amount of the coating material was filled in the die cavity of 12 mm diameter. Then the core tablet was kept in the center of die cavity, then the remaining quantity was filled in the die cavity and it was punched using the rotary tablet processing machine.

Weighed sample of powder mixture was transferred to a graduated cylinder and was tapped for a fixed time or for a fixed number of taps (100). The tapped density was determined by using the following formula.

It indicates the flow properties of the granules and is measured by the ratio of tapped density to the bulk density.

Compressibility index is an important measure that can be obtained from the bulk and tapped densities. In theory, the less compressible a material the more flowable it is. A material having values of less than 20% has good flow property.

The weight of the tablet being made was routinely determined to ensure that a tablet contains the proper amount of drug. The USP weight variation test is done by weighing 20 tablets individually, calculating the average weight and comparing the individual weights to the average. The tablets met the USP specification that not more than 2 tablets are outside the percentage limits and no tablet differs by more than 2 times the percentage limit.

Where: W 1= weight of the tablet before test.

W 2 = weight of the tablet after test.

In-vitro dissolution study of optimized core tablet was performed using Paddle type dissolution apparatus at speed of 50 RPM. 900 ml of phosphate buffer pH 6.8 was utilized as dissolution medium. The temperature of the medium was maintained at 37±0.5°C. Aliquot of dissolution medium (5 ml) were withdrawn at specific time intervals (5, 10, 15, 20, 30, 45, 60 min) and filtered each with whatman filter paper. Equal amount of fresh dissolution medium was replaced immediately after each withdrawal. The amount of drug present in each sample was determined by UV-Visible spectrophotometer at 273 nm.

The weight of the tablet being made was routinely determined to ensure that a tablet contains the proper amount of drug. The USP weight variation test is done by weighing 20 tablets individually, calculating the average weight and comparing the individual weights to the average. The tablets met the USP specification that not more than 2 tablets are outside the percentage limits and no tablet differs by more than 2 times the percentage limit.

Tablet hardness: The resistance of tablets to shipping or breakage under conditions of storage, transportation and handling before usage depends on its hardness. The hardness of each batch of tablet was checked by using Monsanto hardness tester. The hardness was measured in terms of kg/cm2. 5 tablets were chosen randomly and tested for hardness.  The average hardness of 5 determinations was recorded.

Where: W 1= weight of the tablet before test.

W 2 = weight of the tablet after test

The time for which the tablet does not show any release of the drug is known as its lag time. The lag time can be estimated through the dissolution profile of the tablet

The in-vitro drug release study was carried out in USP Type II dissolution apparatus (paddle type) at a speed of 50 RPM (Labindia, Mumbai.). The temperature of the medium was maintained at 37±0.5°C. The drug was kept in 0.1 N HCl buffer (pH 1.2) for 2 h then in phosphate buffer (pH 6.8) for 6 h. Aliquot of dissolution medium (5 ml) was withdrawn at specific time intervals and 1 h interval up to 8 h and filter with whatman filter paper and samples were analyzed in UV-Visible spectrophotometer at 273 nm.

Determination of λ max for Aceclofenac in pH 6.8:-

FIG.1: DETERMINATION OF λMAX FOR ACECLOFENAC IN pH 6.8 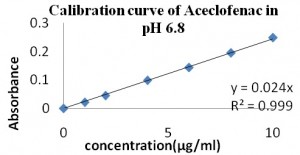 The amounts of the polymers (EC, and HPMC K100M,) were chosen as independent variables in a 32 full factorial design. A statistical model incorporating interactive and polynomial terms was used to evaluate the responses. The % drug release after 6 h and lag time for the nine batches (Fp1 to Fp9) showed a wide variation. The data clearly showed that % drug release before 6 h and lag time are strongly dependent on the selected independent variables.

The fitted equations relating the responses % drug release before 6 h and lag time to the transformed factor are shown in Fig.7, 8. The polynomial equations can be used to draw conclusions after considering the magnitude of co-efficient and the mathematical sign it carries (i.e., positive or negative). The high values of correlation coefficient for % drug release before 6 h and lag time indicate a good fit. The equations may be used to get estimates of the response as a small error of variance was noticed in the replicates. The significance test for regression coefficients was performed by applying the Percentage prediction error test. A co-efficient is significant if the calculated value is within limits.

Degrees of Freedom for Evaluation: 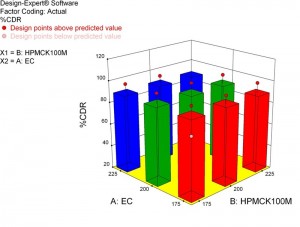 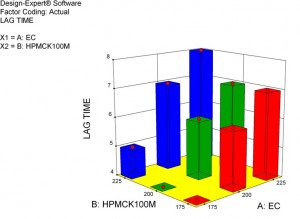 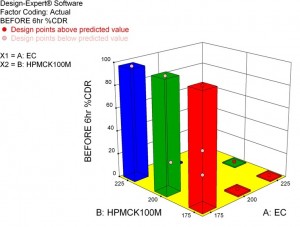 FIG.8: BEFORE 6 hr % CDR OF FORMULATIONS 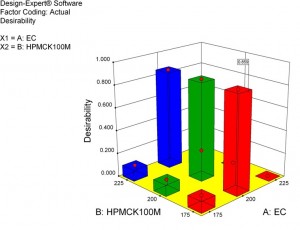 Percentage prediction error can be calculated by using below formula.

CONCLUSION: The present investigation was aimed to develop time depended press coated tablet of Aceclofenac for lowering of Rheumatoid arthritis and morning stiffness. Rheumatoid arthritis and morning stiffness diseases occurs in according to the circadian rhythms, disease symptoms serve best, which releases drug abruptly after a predetermined lag time. A press coated tablet, taken at bedtime with delayed, start of drug release in the early mornings, i.e. at the time of symptoms. The results from this study clearly conclude that combination of HPMC K100M and EC in the form of compression coat is suitable for time depended drug delivery. Formulation Fp4 is the best formulation which produce pulsatile release pattern with initial 6hr lag time and then burst release.