DESIGN AND CHARACTERIZATION OF PULSATILE DRUG DELIVERY SYSTEM OF LERCANIDIPINE

DESIGN AND CHARACTERIZATION OF PULSATILE DRUG DELIVERY SYSTEM OF LERCANIDIPINE

ABSTRACT: The purpose of the present investigation is to formulate and evaluate Lercanidipine pulsatile drug delivery system by press coating method. The inner core tablets were prepared by using direct compression method by using cross-carmellose sodium (Ac-Di-Sol), sodium starch glycolate, crospovidone as super disintegrants. The drug polymer interaction was investigated by FTIR and their results directed further course of formulation. The inner core tablets were evaluated for various post compression parameters like Tablet hardness, Friability, Weight variation, Drug content and in vitro dissolution for both core and coated Tablets. The disintegration time for the core tablet was found to be 35sec and the percentage drug release for the optimized formulation (F7) was 96.1% in 30mins. The Press coat tablets containing HPMC and Ethyl cellulose as a barrier layer. The press coat tablets were evaluated for post compression parameters and were found to be in limits. The percentage drug release of optimized formulation Ethyl cellulose (F7P3) was found to 99.65% at the end of 8hrs

INTRODUCTION: Controlled drug delivery systems have acquired a centre stage in the area of pharmaceutical R and D sector. Such systems offer temporal and/or spatial control over the release of drug and grant a new lease of life to a drug molecule in terms of controlled drug delivery systems for obvious advantages of oral route of drug administration 1. These dosage forms offer many advantages, such as nearly constant drug level at the site of action, prevention of peak-valley fluctuation, reduction in dose of drug, reduced dosage frequency, avoidance of side effects and improved patient compliance.

In such systems the drug release commences as soon as the dosage form is administered as in the case of conventional dosage forms. However, there are certain conditions, which demand release of drug after a lag time. Such a release pattern is known as pulsatile release 2. Traditionally, drug delivery has meant getting a simple chemical absorbed predictably from the gut or from site of injection. A second-generation drug delivery goal has been the perfection of continuous, constant rate (zero order) delivery of bioactive agents.

However, living organisms are not zero order in their requirement or response to drugs. They are predictable resonating dynamic systems, which require different amounts of drug at predictably different times within the circadian cycle in order to maximize desired and minimize undesired drug effects 3. Due to advances in chrono-biology, chronopharmacology and global market constraints, the traditional goal of pharmaceutics (e.g. design drug delivery system with a constant drug release rate) is becoming obsolete. However, the major  bottleneck  in  the  development  of  drug  delivery  systems  that  match circadian rhythms (chrono-pharmaceutical drug delivery system: ChrDDS) may be the availability of appropriate technology. Delivery systems with a pulsatile release pattern are receiving increasing interest for the development of dosage forms, because conventional systems with a continuous release are not ideal 4.

Most conventional oral controlled release drug delivery  systems  release  the  drug  with  constant  or  variable  release  rates.  A pulsatile release profile is characterized by a time period of no release rates (lag time) followed by a rapid and complete release 5. The diseases currently targeted for chrono-pharmaceutical formulations are those for which there are enough scientific backgrounds to justify ChrDDS compared to the conventional drug administration approach.  These include asthma, arthritis, duodenal ulcer, cancer, diabetes, cardiovascular diseases, hypercholesterolemia, ulcer and neurological diseases 6.

Blood pressure (BP) displays a circadian variation with rise in the morning and is associated with many cardiovascular complications such as high risk of cardiac failure and hemorrhagic and ischemic stroke. Therefore, antihypertensive medication in addition to 24 h BP control, more particular for morning BP rise, is beneficial for the prevention of such cardiovascular events 7, 8. Lercanidipine Hydrochloride is a calcium antagonist of the dihydropyridine group and selectively inhibits the trans-membrane influx of calcium into cardiac and vascular smooth muscle and is effectively used for treating hypertension, pulsatile chrono-therapeutic dosage form would be useful in this direction. Lercanidipine is completely absorbed after oral administration. The absolute bioavailability of the drug is about 10% because of high first pass metabolism. Half life of Lercanidipine Hydrochloride is 2-4 hrs 9, 10.  Hence the present objective of the study is to develop control release dosage form along with pulsatile nature.

Bulk density: Bulk density of a compound varies substantially with the method of crystallization, milling or formulation. Bulk density is determined by pouring pre sieved blend into a graduated cylinder via a large funnel and measure the volume and weight.

Bulk density was expressed in g/cc.

Tapped density: Tapped density is determined by placing a graduated cylinder containing a known mass of blend and mechanical tapper apparatus, which is operated for a fixed number of taps until the powder bed volume has reached a minimum volume. Using the weight of the drug in the cylinder and this minimum volume, the tapped density may be computed.

Carr’s Index (CI): Carr’s index is measured using the values of bulk density and tapped density. The following equation is used to find the Carr’s index. The flow property of powder blend based on the CI values is given in Table 3.

Angle of repose: The manner in which stresses are transmitted through a bead and the beads response to applied stress are reflected in the various angles of friction and response. The method used to find the angle of repose is to pour the powder as a conical heap on a level, flat surface and measure the included angle with the horizontal. Powder flow nature based on angle of repose values is given in the Table 5.

Weight variation: Twenty tablets were randomly selected from each batch weighed individually. The average weight and standard deviation was calculated.

Thickness: Three tablets from each batch of formulation  were  collected  and  the  thickness  of  the  tablets  were measured  with  the  help  of  Vernier  calipers.  The average thickness was calculated.

Friability (F): Friability of the tablet determined using Roche friabilator. Pre-weighted sample of tablets were placed in the friabilator and were subjected to the 100 revolutions. Tablets were dusted using a soft muslin cloth and reweighed.

In-vitro Dissolution methods for Core tablets: In–vitro Dissolution  studies  of  Pulsatile  delivery  systems  was done with  the conventional paddle method of core tablets were performed at 37  ± 0.5 °C using 6.8 phosphate buffer in USP II paddle method at 50 rpm. 5 ml of filtered aliquot was manually withdrawn at pre-determined time intervals and replaced with 5 ml of fresh buffer maintained at the same temperature. The samples were analyzed at 238nm using a UV spectrophotometer. Percentage release was determined for each formulation 13-15.

In-vitro Dissolution methods for press-coated tablets: In –vitro Dissolution  studies  of  Pulsatile  delivery  systems  was done with  the conventional paddle method of press coated tablets were performed at 37  ± 0.5 °C using 0.1N HCl for 2hrs and then replaced with 6.8  phosphate buffer in USP II paddle method at 50 rpm. 5 ml of filtered aliquot was manually withdrawn at pre-determined time intervals and replaced with 5 ml of fresh buffer maintained at the same temperature. The samples were analyzed at 238nm using a UV spectrophotometer. The lag time and percentage release was determined for each formulation 13-15.

Evaluation of rapid release core (RRCT): The results are given in the Table 7. From the results, it was found that F7 shows good hardness (4.2 Kg/cm2) and thickness of 3.2mm. Friability is 0.35%.  In the formulations containing CCS and Crospovidone as superdisintegrants there was no much change in the disintegration time with the increase in their concentrations, but where as in the formulations containing SSG as superdisintegrant has shown a considerable decrease in the disintegration time as the concentration increases.

Evaluation Parameters for Press Coated Tablets: The results obtained were within the specified limits and are represented in the Table 9. 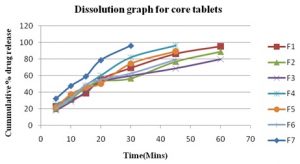 In-vitro dissolution studies for the press coated tablets: The results obtained are given in the Table 10 and represented in Fig. 2. From the results obtained for core tablets, formulations F7 was selected for press coat by using Ethyl cellulose (P3F7)  and was optimized based on the lag time(12.2% in 6 hours) and percent of drug release which is 99.65±2 for 8hours. 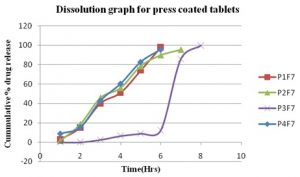 CONCLUSION: Designed and characterized an oral drug delivery system of Lercandipine a lipophilic, dihydropyridine calcium antagonist used in treatment of hypertension because of its selectivity and specificity on the smooth vascular cells. After oral administration it is completely and erratically absorbed from the gastrointestinal tract. However, absolute bioavailability is reduced to 10% because of extensive first pass metabolism to inactive metabolites in the gastric region. In this study the bioavailability of the drug is enhanced by preventing dumping of the dose and maintaining a lag time which not only prevent the metabolism of the drug but also helps in treating the blood pressure which rises notably just before waking up in the early morning hours.

The formulations are designed in such a manner that the drug containing core tablets are surrounded by polymer coating which prevents the release of drug in the gastric region and on reaching the small intestine the polymer coat swells and delays the drug release to create a lag phase. Different formulations of inner core tablets were prepared by using direct compression method. Microcrystalline cellulose, cross-carmellose sodium (Ac-Di-Sol), SSG, crospovidone, Talc, PVP-K30, Magnesium Stearate were used. The Press coat tablets containing HPMC, Ethyl cellulose as polymers for controlling the release of drug. The optimized formulation core tablet contains the average thickness of 3.2±0.02mm, average hardness of 4.2±0.1kg/cm2, average weight of 199±1mg, friability of 0.35±0.04%. Among the various formulations, formulation (F7) with 10mg of sodium starch glycolate showed quicker disintegration time of 35sec and the percentage drug release of 96.1% in 30mins.

The optimized formulation press coated tablet contains the average thickness of 4.3±0.1mm, average hardness of 6.8±0.3kg/cm2, average weight of 500±3mg, friability of 0.62±0.01%. From the above experimental results it can be concluded that, formulated tablets gave satisfactory results for various physicochemical parameters like hardness, friability, thickness, weight variation. Ethyl cellulose has predominant effect on the lag time, while also shows significant effect on drug release. In-vitro release rate studies showed that the P3F7 was optimized based on less amount of drug release during lag time. The percentage drug release from the formulation with Ethyl cellulose (P3F7) was found to 99.65% at the end of 8hrs. Thus the developed formulation full fills the objective of the study.