INTRODUCTION: The oral route is the most preferred method of administration of drugs. Unfortunately, this route is not possible for 50% of currently marketed drug compounds due to their low solubility in water and therefore, low oral bioavailability. The poor solubility and low dissolution rate of poorly water-soluble drugs in the aqueous gastrointestinal fluids often cause insufficient bioavailability 1, 2.

Especially for class II substances, according to the Biopharmaceutics Classification System (BCS), bioavailability may be enhanced by increasing the solubility and dissolution rate of the drug in the gastrointestinal fluids 3. The poorly soluble drug having dissolution rate too slow therefore, uptake cannot be completed within the time at the absorption site. If it remains in GIT for a longer period may lead to decomposition of the drug.

Self-emulsifying drug delivery systems (SEDDS) are newly developed and are having a promising approach to improve the oral bioavailability of drugs. With these formulations slow and incomplete absorption of the drug is reduced, transportation via lymphatic system is increased and absorption from GI tract is facilitated 4, 5.

Microemulsions, on the other hand, are emulsion systems that have a droplet size of a few to hundreds of nanometers and are typical complex fluids that consist of three essential components: two immiscible fluids and a surfactant. Typically these are water-in-oil or oil-in-water micro-emulsions where the rheological properties of these two liquids and microstructure of the surfactant strongly affect the resulting microemulsion. 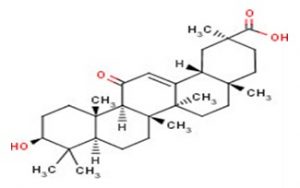 In the present study, we have formulated and evaluated glycyrrhetinic acid in the form of microemulsion as a self-emulsifying drug delivery system (10 mg/ml) using almond oil as an oleaginous phase, tween 80 as surfactant and propylene glycol as a co-surfactant.

MATERIALS AND METHODS: Glycyrrhetinic acid was purchased from Yucca Enterprises Mumbai. Tween 80, propylene glycol, almond oil were purchased from Bangalore Chemicals. All other chemicals used were of AR grade and used without further purification.

Excess of the drug was added to 5 ml each of oils, surfactants, co-surfactants and aqueous phase in screw-capped tubes and shaken on orbital flask shaker at 100 RPM for 24 h at ambient temperature. The resultant solution was then centrifuged at 5000 RPM and the clear supernatant liquid was decanted and filtered through Whatman 0.45µ nylon membrane filter. The amount of drug dissolved was estimated by using UV spectro-photometer after suitable dilution with methanol. The solubility study was done in triplicate. The result of the analysis is reported in Table 1.

No distinct conversion form water-in-oil (w/o) to oil-in-water (o/w) microemulsion was observed. The rest of the region on the phase diagram represents the turbid and conventional emulsions based on visual inspection. 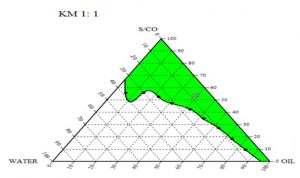 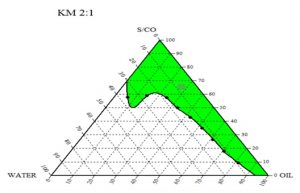 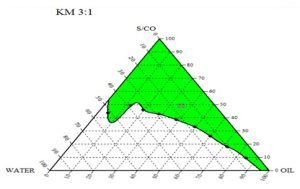 The phase study clearly reveals that with increase in the weight ratio of surfactant (Km = 1-3), the microemulsion existence region also increased. The maximum proportion of oil was incorporated in weight ratio 3:1 of Tween 80 to Propylene Glycol. Based on the phase diagram varying proportions of surfactant - co-surfactant (35-60%), oil (60-10%) and water (5-30%), six different formulations were prepared using Almond oil / Tween 80 / Propylene Glycol / Water (ATP) Fig. 5. 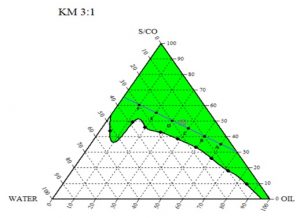 Determination of pH: The pH value of a solution was determined using the pH meter (Model El 101 Equiptronics, India). The prepared ME was taken and immersed glass electrode and allowed to stabilize. After stabilization, the pH of the formulation was recorded.

Determination of Viscosity: 9-15 The viscosities of microemulsions were measured with a Brookfield viscometer (LV2, Brookfield Inc., USA) equipped with spindle no. 4. The measurement was done at ambient temperature. Viscosities were determined in triplicate.

Drug Content: The drug content of the prepared glycyrrhetinic acid MEs was determined by the HPLC method to evaluate the uniformity of the dose in the formulation. HPLC system used was a JASCO system equipped with a model PU 2080 Plus pump, Rheodyne sample injection port (20 μl), JASCO UV 2075 Plus detector and Borwin chromatography software (version 1.5). A chromatographic column HiQ Sil C8 (250 × 4.6 mm, 5 μm) was used for separation at a flow rate of 1 ml/min using 10 mM KH2PO4 buffer: Acetonitrile (5:95 v/v) as mobile phase and detection at 250 nm. The retention time of the drug found to be 3.620 min 16.

In-vitro Drug Diffusion Study: The in-vitro diffusion study of glycyrrhetinic acid from various microemulsion formulations were determined to evaluate the effect of oil content & surfactant/co-surfactant. The permeation studies were performed using a dialysis membrane at 37 ± 0.1 °C.

1.0 ml sample was withdrawn from the receptor fluid at a predetermined time interval for upto 6 h after the application. The first two hours the medium used was the 0.1N HCl and later on phosphate buffer pH 6.8 is used for four hours. All the samples collected were analyzed by UV method, and % CDR is calculated 17-21. 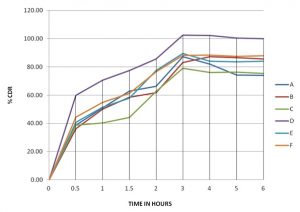 As the surfactant concentration increases, drug permeation also increases due to increased contact of drug and membrane. This might be due to the reduction in surface tension and increased wetting of drugs. From the permeation studies, it clearly reveals that the permeation rate increased for formulation D containing almond oil 30%, Tween 80/Propylene Glycol 50% (3:1) and water.

CONCLUSION: Microemulsions containing glycyrrhetinic acid were formulated for oral administration. Pseudoternary phase diagrams were constructed to determine the components and their concentration ranges for the formation of the microemulsion. Their concentrations were optimized by evaluating in-vitro permeation rates of glycyrrhetinic acid. The optimum formulation of the microemulsion consisted of almond oil 30%, Tween 80/ Propylene glycol 50% (3:1) and water.