ABSTRACT: The objective of this study was to design and develop a skin lighting cream for improved skin whitening using herbal extracts from Glycyrrhiza glabra (Licorice) root and Vateria indica bark. The carrier cream base was developed by emulsion technique to deliver skin whitening property by holding the natural herbal actives such as G. glabra root extract and V. Indica bark extract as well as physical sun protecting agents such as titanium dioxide for the skin whitening properties. The emulsion cream was designed and optimized to deliver the skin lighting property by the combination of G. glabra root extract and V. Indica bark extract. This unique composition helps to provide the melanin inhibition effect through cellular melanin inhibition pathway. The optimized emulsion cream formula was evaluated as per ICH stability guidelines (real time, 30°C and 65% Relative Humidity (RH) and accelerated, 45°C and 75% RH) to ensure emulsion cream stability and shelf life of the product. The optimized and stabilized formula flow behaviours were determined by various rheological studies such as flow curve measurements (viscosity vs. shear rate), amplitude sweep measurement(linear visco elastic range), frequency sweep measurements (stability test), amplitude sweep measurements (spreadability test), and thixotropic test. The performance of the final product was measured by skin melanin inhibition property and the results observed indicated better skin lighting compared with control. The safety of the final product was measured by Netral Red Uptake NRU-assay using NIH3T3 cell lines and the CTC50 value of the product was found to be >1000μg/ml at 24 h study period.

INTRODUCTION: Skin complexion is a characteristic that is affected by many factors. Various genes, nutrition, and environmental factors determine the colour of the skin. One of the most notable components of skin that contributes to complexion is a pigment known as melanin.

Melanin is a pigment that is produced by cells known as melanocytes in the skin of most animals including humans. This pigment comes in different shades, depending on the genetic makeup of the individual. Melanin comes in two basic forms and can range from yellowish-red to dark brown. Eumelanin is the most common form of melanin and is brownish.

The other basic form is called pheomelanin, which produces reddish-brown colour that is often associated with freckles and red hair. The production of melanin in an individual is determined by several factors.

All these factors play a role in the production and expression of melanin in the skin. Here the objective is to design and develop a skin lighting cream for improvement of skin whitening using herbal extracts from Glycyrrhiza glabra (Licorice) root and Vateria indica bark. The carrier cream base to be designed by emulsion technique to deliver skin whitening property by holding the natural herbal actives such as G. Glabra root extract and V. indica bark extract as well as physical sun protecting agents such as titanium dioxide for the skin  whitening properties. The performance of the final product to be measured by skin melanin inhibition assay and the safety of the final product to be measured by Netral Red Uptake NRU-assay using NIH3T3 cell lines to find out the safety aspects.

Polyacrylic/copolymer: Acrylates copolymer is a copolymer of two or more monomers consisting of acrylic acid, methacrylic acid, or one of their simple esters (Wenninger et al., 2000). The smallest or primary units of acrylates copolymer are individual particles < 1 µ in diameter, which partially fue to form agglomerates ranging in size from approximately 20 to 80µ; agglomerates are held together by electrostatic forces and mechanical entanglement to form larger aggregates of 200 to 1200µ (Klein and Disapio, 1989). 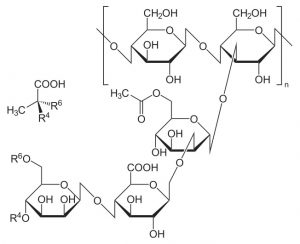 Glycyrrhiza glabra root extract: The roots and rhizomes of Glycyrrhiza species have long been used worldwide as an herbal medicine and natural sweetener. G. Glabra root is a traditional medicine used mainly for the treatment of peptic ulcer, hepatitis C, and pulmonary and skin diseases; although clinical and experimental studies suggest that it has several other useful pharmacological properties such as anti-inflammatory, antiviral, antimicrobial, anti-oxidative, anticancer activities, immune-modulatory, hepato-protective and cardio-protective effects. A large number of components have been isolated from G. glabra, including triterpene saponins, flavonoids, iso-flavonoids and chalcones, with glycyrrhizic acid normally being considered to be the main biologically active component 5. Additionally, in the cosmeceutical segment it has whitening effects using in vitro inhibition of tyrosinase and DOPA auto-oxidation activity 6.

Emulsion Technique: Emulsions are milky, thermodynamically stable, isotropic liquid mixtures of oil, water and surfactant, usually in combination with a co-surfactant. The aqueous phase may contain one or more salts and/or other ingredients, and the "oil" may actually be a complex mixture of different hydrocarbons and olefins. There are three basic types of emulsions—direct (oil dispersed in water, o/w), reversed (water dispersed in oil, w/o) and bi-continuous.

Cell viability assay: The cell viability effect of final optimized formula (CCW-F2) was determined by 3-(4, 5- dimethylthiazol- 2- yl) -2, 5-diphenyltetrazolium bromide (Sigma, Bangalore, Karnataka) (mitochondrial toxicity test) assay 15. Both NIH3T3 and B16F10 cells (104 cells/ml) were cultured on a 96-well plate in their respective media with different concentrations of CCW (1000 - 15.625 μg/ml), for 24 h. To each well, 10 μl of MTT (5 mg/ml) was added and the cells were incubated for 4 h at 37ºC. The supernatant was removed and 100 μl of dimethyl sulfoxide (Merck, Mumbai, Maharashtra, India) was added to each well to dissolve the formazan product. Absorbance was determined at 540 nm spectrophotometrically using an ELISA reader (Synergy HT multi-detection micro plate reader). The CTC50 values of CCW-F2 were calculated and the nontoxic concentrations were taken for further experiment.

Melanin inhibition assay: The mouse melanoma (B16F10) cells were seeded in 40 mm petriplates (1×105 cells/well) using the DMEM medium supplemented with 10% FBS for 24 h. The cells were treated with various concentrations of CCW-F2 and 100 µM concentration of forskolin for the stimulation of melanin for 72 h and detached by 0.05% trypsin-EDTA. The cell pellets were mixed in 120 μl of 1N NaOH for 1 h at 65°C and melanin concentration was determined spectro photometrically 405 nm using an ELISA reader 13, 14. For melanin content analysis, kojic acid was used as a reference standard.

Viscosity study: Viscosity is an important parameter to predict the consistency of the product. The viscosity was estimated using the viscometer (T-96 spindle at 1.00 rpm). The product stability was assessed initially and at first, second, third and sixth months under accelerated stability (45°C and 75% RH) and real-time stability conditions (30°C and 65% RH). The results are shown in Fig. 2. 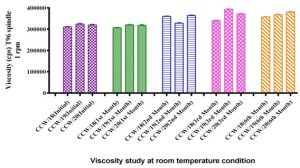 pH determination: pH was determined using the pH meter under real-time (30°C and 65 % RH) and accelerated conditions (45°C and 75% RH) at first, second, third and sixth months. The results are shown in Fig. 4 and 5. 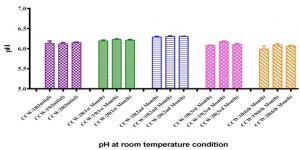 Flow curve measurements: The final product sample was analyzed for flow behaviour in the shear rate range of 0.01 to 100 1/s, which helped observe the changes in viscosity of the samples as a function of shear at 25°C (rotational mode). Shear thinning behaviour was observed and the results are shown in Fig. 6.

Amplitude sweep measurement (linear visco-elastic range): Amplitude sweep from 0.01 to 100% strain rate was performed at constant angular frequency of 10 rad/s to determine the limit of linear visco-elastic (LVE) range. The results indicated that below this limiting value, G’ (elastic modulus) and G” (loss modulus) curves remained at a constant plateau; the structure of the sample showed stable curve under these conditions. In oscillatory mode the amplitude sweep showed that the limit of the LVE range for clear complexion whitening day creams (F1 & F2) were around 1.5%. The amplitude sweep curve showed that G’ > G”, which implied that all the above samples (F1 & F2) have good emulsion strength. The results are shown in Fig. 7.

Frequency sweep measurements (stability test):  After determining the LVE range, frequency sweep was carried out for each sample in the range of 0.1 to 100 rad/s by keeping strain rate (according to LVE range) constant to find out the visco-elastic behaviour and long-term storage stability of the cream samples with time (oscillatory mode). The samples are generally stored at 25°C to simulate the practical condition and frequency sweep experiments were performed at this temperature. As creams are semi-solid emulsions (dispersions), their long-term stability at rest can be analyzed using G’ values at low frequencies. The G’ and G” values are compared to characterize the structure of the final product. The frequency sweep curves clearly showed that all the samples have G’>G” in whole frequency range, which indicates that all the samples have good structural strength. In the low-frequency region, the decrease in G’ slope was less, which indicates good stability and shelf life of both the samples. The results are shown in Fig. 8.

Amplitude sweep measurements (spreadability test): The temperature-dependent structural strength and spread ability test were carried out for amplitude sweep in strain range of 0.01 to 100% with a constant angular frequency of 10 rad/s at constant temperature of 33°C (to simulate the practical condition of the cream when it is applied to outer body parts). In the LVE range (ie, at very low deformations), all the samples were observed to show G’> G”, which indicates that the elastic modulus is higher than viscous modulus (i.e., good emulsion strength of the samples). The G’ curves show that both the samples spread smoothly and consistently with a similar curve pattern, which approves its spread ability. The results are shown in Fig. 9. 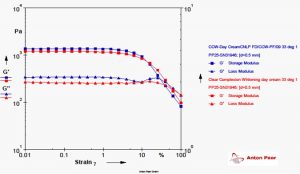 Thixotropic test: The thixotopic test was done in 3 intervals. 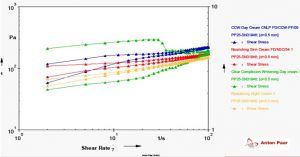 Cytotoxicity studies (MTT assay): The cytotoxic activity of F2 (CCW-DAY CREAM) was analyzed by MTT assay. The results showed that increase in CCW concentration up to 1000 μg/ml did not reduce the cell viabilities in all tested concentrations in both B16F10 and NIH3T3 cells. The CTC50 value of CCW-F2 was above 1000 μg/ml at 24 h, and the nontoxic concentration was taken for further study. The results are shown in Fig. 11 and 12. 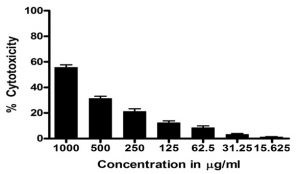 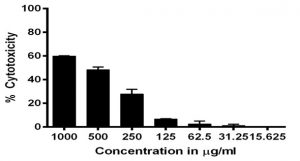 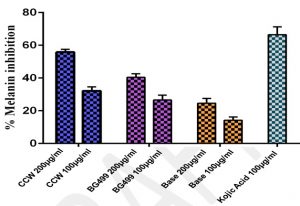 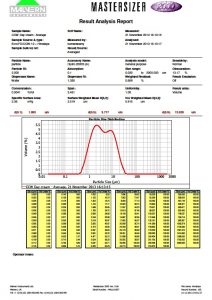 CONCLUSIONS: The emulsion based cream was designed and optimized using suitable polymers, stabilizing and emulsifying agents. The actives from G. Glabra root extract and V. indica bark extract in the cream inhibit melanin pigment and thus, help in skin lighting. The final optimized product (F2) was subjected to stability studies as per the ICH guidelines under both real-time (30°C and 65%RH) and accelerated conditions (45°C and 75% RH). The results showed better emulsion stability under both the conditions. pH study was performed to ensure the pH range and product stability. At all temperature conditions, the pH range was observed to be between 5.86 (minimum) and 6.30 (maximum). The viscosity study revealed the range to be between 2,70,000 cps (minimum) and 3,94,000 cps (maximum). The CTC50 value of CCW day cream (F2) was above 1000 μg/ml at 24 h. The melanin inhibitory study results highlighted the better skin melanin inhibition in melanocytes at the tested concentrations. Therefore, CCW day cream (F2) brings about melanin inhibition in skin cells and plays a vital role in improving complexion and whitening for better skin asthetics.

DECLARATION OF INTEREST: The authors report no declarations of interest.