INTRODUCTION: Hydrochlorothiazide (HCT) is a diuretic agent, chemically described as a 6-chloro-3,4-dihydro-2H-1,2,4-benzothiadiazine-7-sulphonamide 1,1-dioxide, which is widely used in antihypertensive pharmaceutical preparations, which reduce sodium reabsorption and peripheral vascular resistance. Its molecular formula is C7H8ClN3O4S2 having molecular weight 297.74 g/mole. It is insoluble in water, freely soluble in methanol, soluble in diluted ammonia or sodium hydroxide.1

According to the Biopharmaceutical Classification System (BCS) aqueous solubility and permeability are the most important properties affecting drug bioavailability. HCT is classified in Class IV, where the drugs have low solubility and low permeability characteristics after oral administration 1, 2.

Atenolol is a β1 selective drug and widely used in treatment of cardiovascular diseases. It is chemically described as benzene acetamide, 4-[21-hydroxy-31-[(1-methyl ethyl amino] propoxy]. Its molecular formula is C14H22N2O3having molecular weight 266.34 gm/mole 2.

The concept of co-crystallization constitutes a selective route to the concerted design of pharmaceutical compounds with desired pharmacokinetic and physical properties. The term “co-crystals” is not easily defined but is most commonly used in order to describe a crystal containing two or more components that form a uniform phase. A more refined definition describes a co-crystal as a “multicomponent crystal that is formed between two compounds that are solids under ambient conditions, where at least one component is a neutral API and the co-crystal former is a pharmaceutical acceptable ion or molecule.

In early studies, Etter and co-workers proposed several “hydrogen bond rules,” including the observations that all good proton donors and acceptors are used in hydrogen bonding, and the best donor typically pairs with the best acceptor in a given crystal structure. The combined use of the hydrogen-bond rules with a geometric analysis assisted Etter and co-worker in implementing rational design of co-crystals in the synthesis of many new supramolecular structures 3,4.

Co-crystal is crystalline entity formed by two different or more molecular entities where the intermolecular interactions are weak forces like hydrogen bonding and π-π stacking. The concept of modifying the properties of a drug molecule by forming a pharmaceutical co-crystal containing single APIs and a pharmaceutical relevant co-former with improved properties compared with the pure drug crystal has generated immense interest. Physicians prescribe combination therapy frequently to treat and manage a plethora of medical conditions. Multi-API co-crystals, relatively unexplored solid forms of APIs, have potential relevance in the context of combination drugs for pharmaceutical drug development 5.

The design of co-crystals seems to be straight forward because donor and acceptor functionalities can be brought together more easily than with single component systems since the partners are more accessible to arrange themselves into an optimal geometry, leading to favorable intermolecular interactions. Using O-H...N interactions and also N-H…O, one can produce numerous co-crystals from di-acids, alcoholic groups and nitrogen containing aromatic ring and some other compounds. In the absence of strong hydrogen bridges, also, much weaker intermolecular interactions such as C-H…X(X=O,N) can also be used alone to form molecular complexes. Formation of co-crystals may lead to increase in solubility of Hydrochlorothiazide.

Conventional HCT-ATL tablets are available in market are not suitable where quick onset action required. Besides, the conventional tablets also show poor patient compliance particularly by geriatric patients. As the patients with sudden increase blood pressure and acute angina attack, have markedly reduced functional ability and extremely restless, in such cases rapid onset of action is prime importance. So the patients would be benefited from acute treatment by using proposed drug delivery system. This may help them to return to normal state and resume their functional activities. To provide the patients with the most conventional mode of administration, there was need to develop rapidly disintegrating dosage form 6.

Hydrochlorothiazide and Atenolol was received as a gift sample from the Okasa Pharma Pvt. Ltd., Satara, Maharashtra, India. Other chemicals and solvents were obtained from different commercial suppliers.

Taken 10 ml of Ethanol in beaker and heated on water bath at temp.50 to 55°C. Then added equimolar ratio (1:1) of Hydrochlorothiazide and Atenolol in that beaker until it saturates. The Ethanol was removed by evaporation at room temperature and co-crystals were obtained.

Methods of Characterization of Co-Crystals:

Solubility studies were performed according to the method reported by Higuchi and Connors. Excess of pure drug and prepared co-crystals were added to 10 ml of distilled water taken in stopper conical flasks and shaken for 24 hours in rotary flask shaker at room temperature. After shaking to achieve equilibrium, appropriate aliquots were withdrawn and filtered through Whatmann filter paper no. 41 and was analyzed by UV spectrophotometer (Lab India).

FTIR spectra of HCT-ATL co-crystals were obtained by Attenuated Total Reflectance (ATR Bruker Alpha). IR spectrum of drug was recorded as potassium bromide pellet at a resolution of 4cm-1 over a range 4000-650 cm-1.

The SEM of HCT-ATL co-crystals were carried out to determine the external morphology. The sample was mounted directly on to the SEM sample holder using double sided adhesive tape images were recorded at the required magnification using SEM (JEOL 5400, Japan).

Dissolution were performed according to the Dissolution tester (USP Type II) in 900 ml of 0.1 N Hydrochloric acid at the thermostatically controlled temperature of 37°C ± 0.5°C and stirred at 50 rpm. At various time intervals, samples were collected, filtered and analyzed by UV Spectrophotometer (Lab India) at wavelength 272nm.

For the formulation of fast dissolving tablets 22 factorial design is used and 4 batches are formulated and 2 levels are taken (- as 4%) and (+ as 6%) for Crospovidone and Sodium Starch Glycolate.

by open capillary method by using melting point apparatus and found to be shown in table. 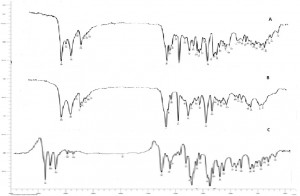 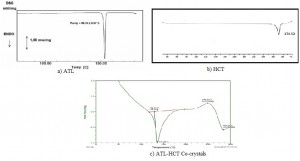 DSC thermogram of HCT-ATL co-crystal was recorded by using a Differential Scanning Colorimetry with computerized data. HCT and ATL had shown a single endothermic peak maxima at 268.12°C and 152°C due to melting of drug. 6, 13 The thermal behavior of HCT-ATL co-crystal had shown 137.08°C sharp peak for ATL and for HCT 284.39°C which shows shifting of peaks due to the melting of co-crystals. ATL and HCT were found to be below the melting point of co-crystal former. Single endothermic transitions for co-crystal indicates absence of unbounded or absorbed solvent or water and also demonstrate the stability of the phase until melting point. 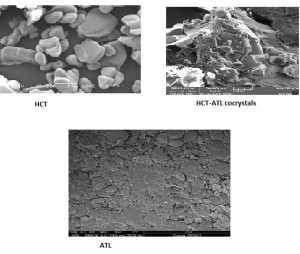 It was determined by fixed funnel method and was calculated by using the formula.

The tapped density apparatus was set to 100 taps per minute.

It was calculated from bulk density and tapped density.

It was calculated from bulk and tapped density. 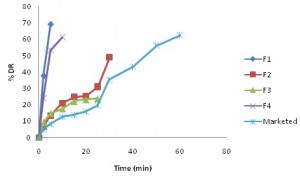 CONCLUSION: Co-crystals of HCT-ATL was successfully formed using solvent evaporation and solution co-crystallization methods. This can be proved through their characterization using IR, DSC and SEM. The study successfully demonstrates that co-crystals have shown increased solubility, flow properties and compressibility. The advantages of fast dissolving tablet will surely enhance the patient compliance, low dosing, rapid onset of action and fewer side effects. From the study, it can be concluded that using super disintegrates in tablets showed better disintegration and drug release as compared to normal tablet.