DESIGN AND DEVELOPMENT OF MEDICATED CHEWING GUM FOR MANAGEMENT OF DEPRESSION

DESIGN AND DEVELOPMENT OF MEDICATED CHEWING GUM FOR MANAGEMENT OF DEPRESSION

ABSTRACT: The objective of research work is to formulate a venlafaxine HCl containing medicated chewing gum that has greater bioavailability and compliances than conventional treatment strategies. The four different formulations were prepared after some trial batches, containing different concentrations of the gum base and sucrose (MCG- I- MCG- IV). These batches were optimized on basis of softness and sweetness. Batch MCG- II was found to be optimized containing 60% gum base and 15% of sucrose. Further batches were characterized on basis of Physical characterization, texture analysis, drug content and in-vitro drug release. All batches show good color, softness, and taste. Drug content was found out in a range of 98.43- 99.24%. The in-vitro drug release data revealed that MCG- II shows better drug release than other formulations. Medicated chewing gum can be a better choice for the treatment of depression in the coming years, which may provide several benefits to patient.

INTRODUCTION: Depression is a state of disease in which low mood and dislike of activities that can affect a person s thoughts behavior, feeling and physical activities. Depression has categorized a group of brain disorders in which a wide range of symptoms occurs that reflect alterations in cognitive, psychomotor, and emotional processes 1. The depressive condition is one of its many forms must surely be one of the most common harms encountered in carry out of medicine 2. Depression generally occurs disorder that nearby with depressed mood, loss of interest, feeling of guilt, or low self-worth, disturb sleep or appetite etc. 3 It is an illness that affects your thoughts, feelings, behavior, and overall health. A person who suffer from depression feels that “there is no meaning of life” and all things are worthless and waste of time.

A depressed person also wants a ray of hope in their mind, but their intensities and enthusiasm are very less than negative thoughts. Depressive states have been roughly categorized into two groups: mild (dysthymic) and major depression. The primary symptom for both disorders is a disturbance of mood, and the distinction between the two is a matter of degree (American psychiatric Association 1994).

According to the Diagnostic and statistical manual of mental health, fourth edition (DSM.-4), major depressive disorder is a clinical course that is characterized by one or more depressive episodes without a history of a maniac.

Major depressive disorder is characterized by one or more major depressive episodes (at least 2 weeks of depressed mood or loss of interest in usual activities accompanied by at least four additional symptoms of depression).

There are various formulations and many oral pills available for the management of depression, but there are some side effects and less patient compliance; because of it some challenges come in conventional therapy which overcomes by novel system of drug delivery. The oral drug delivery system is highly accepted amongst patients 25. In the present era, many research and technological advancements are made in novel oral drug delivery. Chewing gum incorporated with various types of active ingredients is one such example of novel drug delivery. Medicated chewing gum (MCGs) is effective locally as well as systemically in dental caries, smoking cessation 28, pain, obesity, acidity, allergy, nausea, motion sickness 21, 22, diabetes, anxiety, dyspepsia, osteoporosis, cough, common cold, etc. 16, 17, 18, 19.

There are millions of people affected by depression worldwide, with which a major number of women and adults included. According to World Health Organization (WHO) 121 million people suffer from a major depressive disorder. Because of these, there are also numbers of antidepressants available for the treatment of major depressive disorders, and their various stages.

Effexor (venlafaxine hydrochloride) which is 12th highly prescribed antidepressant in 2009. The steady-state half-life of venlafaxine and its metabolite o-dimethylevenlafaxine is 5 and 11 h, respectively two or three times daily dose is good to maintain adequate plasma drug concentration.

The formulation of chewing gum of antidepressant will enhance the patient’s compliance by providing the systemic effect immediately by directly affecting the central nervous system 13, 14. There are various case studies and clinical trials done for chewing gum and concluded by higher patient compliance 11, 18, 24. Hence, the objective of the research work is to formulate a venlafaxine-containing medicated chewing gum that has greater bioavailability and compliances than conventional treatment strategies. The most common problem seen in conventional tablets is difficulty in swallowing, high systemic first-pass metabolism, delayed onset of action, less bioavailability. To overcome these problems, chewing gum is a good option to develop as a new treatment strategy for depression 4, 12, 27.

Preparation of Medicated Chewing Gum: Preparation of medicated chewing gum using the conventional method in which gum base is weighed accurately and soften using a water bath in a porcelain dish. After softening, add an accurate amount of plasticizer for plasticity, humectants for proper moisture in gum, add sweetening agent and flavor for taste masking, and color for elegance. Then it was mixed in porcelain and gave shape to molten mass before getting hardness 5, 6, 28.

Texture Analysis: The chewing hardness was determined to assure its rigidity and ability to maintain its shape during processing, packaging, and transportation. The hardness test was performed using a texture analyzer (TA. XT). Before performing the test procedure, the instrument is calibrated for force and distance. Heavy-duty platform with a perforated plate and 2 mm cylindrical probe was used to perform the test. The developed chewing was placed at the center of the platform. As the test was commenced, the probe approached the test sample, and once a 5 gm trigger force was attained, a rapid rise in force was observed. The probe was allowed to penetrate 3 mm in the chewing gum; after that probe was returned to its original position. The mean maximum force was measured as a hardness of the chewing gum 7, 26.

Drug Content: Chewing gum was manually divided into pieces and transferred into a separating funnel containing 10 ml of Phosphate Buffer 6.8. The separating funnel was shaken for 10 - 15 min so as to disperse the chewing mass. The turbid solution was shaken simultaneously with 50 ml Phosphate Buffer 6.8 for 15 min for dissolving the drug into it. The separating funnel was kept undisturbed for 15 min for the separation of the two phases. The aqueous phase was collected and filtered through Whatman filtered papers grade 41. The filtrate was sufficiently diluted and estimated for the drug content at 224.6 nm in UV spectrophotometer 8, 9.

In-vitro Drug Release from Medicated Chewing Gum: It has been reported commercially that the drug release from medicated chewing gum as per the specification given in United States Pharmacopoeia and European Pharmacopoeia is determined by applying a mechanical kneading procedure to a piece of gum placed in a small chewing chamber containing a known volume of buffer solution 10, 15, 22, 23. 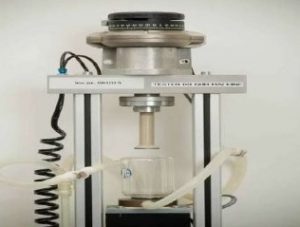 Stability Studies of Formulation: The optimized formulation was stored in Aluminum foil at 40 ºC for 90 days. After each 30 days, the formulation was examined for natural aging, physical nature, and Softness.

Optimization of Chewing Gums: The Various formulations prepared were optimized on the basis of Softness and Sweetness. Four batches were prepared (MCG-I to MCG-IV) containing different concentrations of Gum base and sucrose as these two affect the release, softness, and sweetness of chewing gums that are important properties for formulation.

TABLE 3: SOFTNESS AND SWEETNESS OF FORMULATIONS

On the basis of the above parameters MCG- II and MCG- IV was found to be better than the other two formulations but in MCG-IV, due to more concentration of sucrose, after 1-2 days, sucrose get leaches out from formulation, and it forms a hard layer of sucrose on the surface of chewing gums. So MCG- II was selected as an optimized formulation for further studies.

Characterization of Medicated Chewing Gum: The optimized batch of Chewing Gums was characterized on different parameters.

Physical Characterization: The optimized formulation was physically characterized for Color, Shape, Stickiness, and taste. The Chewing Gums were cubic shaped, and there was no stickiness in the formulation, and it was sweet in taste.

Texture Analysis: The texture analysis graphs show the variation in the Hardness, Firmness, and Springiness of the various chewing gum formulations, which can be utilized in formulating a formulation with proper hardness and springiness 7, 20. 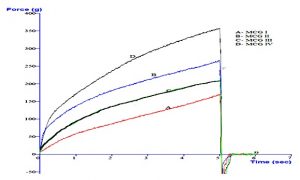 The Values are expressed as ± Sd, n=3

Drug Content Determination: Different formulations' drug content was calculated after the determination of absorbance at λmax in UV- Spectrophotometer.

In-vitro Drug Release of Different Batches: The Drug Release from different Medicated Chewing gums show variations in the Release Pattern due to variation in compositions of the Formulations and also shows the difference in the % Cumulative Drug Release concerning Time.

The Values are expressed as ± Sd, n=3 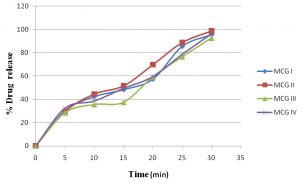 Stability Study of Optimized Formulation: The optimized formulation was stored in Polyethylene after wrapping in aluminum foil at 40±2 ºC and 75% RH for 90 days. After each 30 days, the formulation was examined for natural ageing, physical nature and softness. The results are given in following table.

CONCLUSION: The objective of research work is to formulate a venlafaxine HCl containing medicated chewing gum that has greater bioavailability and compliances than conventional treatment strategies. The four different formulations were prepared after some trial batches, containing different concentrations of gum base and sucrose (MCG- I- MCG- IV). These batches were optimized on the basis of softness and sweetness. Batch MCG- II was found to be optimized, containing 60% gum base and 15% of sucrose.

The Stability studies were performed for an optimized batch at 40±2 ºC and 75% RH for 90 days. It was observed that there was no change in the first 60 days of storage, and in 90 days, there is a slight change in softness, but the integrity of formulation was maintained that confirms the stability of the optimized formulation.

Hence, on the basis of the present study, it can be concluded that the medicated chewing gum can be a better choice for the treatment of depression in the coming years, which may provide several benefits to patients.