ABSTRACT: Ondansetron is the first of a new class of drugs, selective serotonin receptor antagonist (5 hydroxy tryptamine type 3) used as an anti emetic associated with cancer chemotherapy. Its Orally Disintegrating Tablet has been developed for patients who find swallowing difficult by freeze dried technology by RP Scherer Corporation and Scherer DDS. The aim of this study was to design a new orally disintegrating tablet that has high hardness and a fast disintegration rate using conventional tablet technology. Ondansetron ODT was prepared by using traditional technology like direct compression and wet granulation technique. As blend exhibited poor flow in direct compression process, so wet granulation process was finalized. Bitter taste of Ondansetron has been masked by use of sweetener like aspartame and peppermint flavor.  Quick disintegration has been achieved by use of surfactant in the granulating solvent and superdisintegrant like crospovidone in both intra and extragranular part. Design space has been created by use of different concentrations of both binders as well as disintegrant with the help of DOE and a robust formulation has been made. In vitro release profile of both formulations prepared by freeze drying and wet granulation is matching. Formulation prepared by wet granulation process has been found acceptable to volunteers in term of taste, mouth feel and convenience of administration.

INTRODUCTION:Ondansetron is the first of a new class of drugs, selective serotonin receptor blocker (5 hydroxy tryptamine type 3) used as anti emetic associated with cancer chemotherapy 1-3. ODT has been developed for patients who find swallowing difficult; it disintegrates quickly on the tongue and is swallowed with saliva.

Ondansetron ODT is better dosage form in term of ease of administration than conventional Ondansetron tablet and is also equally effective in controlling the emesis induced by anticancer agent 4. An Ondansetron ODT has been developed by using wet granulation technique and optimized using design of experiment.

An Ondansetron Orally Disintegrating Tablet (Zofran ODT®) has been developed by RP Scherer Corporation and Scherer DDS (Swindon, United Kingdom) and is marketed by Glaxo Smithkline and its photograph is shown in Figure 1.

Zofran ODT® tablets are freeze-dried, strawberry flavored orally administered formulation of Ondansetron which rapidly dissolves on tongue and does not require water to aid dissolution or swallowing. 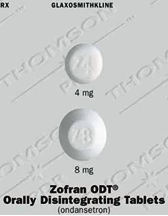 Freeze-Drying or Lyophilization: Freeze drying is the process in which drug solution or suspension is freezed and solvent is removed by sublimation. This technique creates an amorphous highly porous structure which aid in rapid dissolution or disintegration of the tablet dosage form.

Disadvantage of Lyophilization or Freeze Drying:

a)      Generally Lyophilization is very expensive and time consuming process.

b)      Generally Lyophilized formulations have low hardness and high friability. For this reason, conventional packing like HDPE bottles cannot be used for the lyophilized tablets.

Objective of the current research is to develop an Ondansetron Orally disintegrating Tablets using conventional tablet technology that produces tablets of good hardness, low friability and disintegration time less than 6 seconds when tested using USP/EP Disintegration apparatus. This will serve the three purposes

i)                    By achieving disintegration time less than 6 seconds, the ODT will be equivalent to freeze dried tablets in term of mouth feel, and ultimately patient compliance.

ii)                  By achieving good hardness and friability (less than 1%), these tablets can be packed in traditional bottle packs and can be transported without damaging the tablets. It does not require special handling by patients and can be taken very conveniently.

iii)                It will also comply to the Pharmacopoeial requirement with respect to disintegration time (less than 10 seconds).

To achieve the above objective, design of experiment was applied to optimize the concentration of critical excipients like binder and disintegrants. Design space was created that shows which combination of disintegrant and binder concentration can produce ODT with disintegration time less than 6 seconds. This resulted in robust formulation with desired product characteristics.

Materials: Following active ingredient and excipients were selected for the formulation of ODT. Details are tabulated in the Table 1.

TABLE 1: ACTIVE INGREDIENT AND EXCIPIENTS SELECTED FOR THE FORMULATION OF ODT

All other reagents and chemicals of analytical grade were used in our experiments.

In Wet granulation, ingredients like Ondansetron base, Mannitol, Microcrystalline Cellulose, Silicified MCC, Crospovidone, PG starch were taken in a Rapid Mixer Granulator and granulated using hydro alcoholic or aqueous solution of Sodium Lauryl Sulphate. The wet mass was dried in a rapid dryer and after milling; sized granules were mixed with other extragranular ingredients and compressed at an average weight of 100 mg for 8 mg strength and at 50 mg average weight for 4 mg strength using suitable punches.

Tablets with different ratio of binder and disintegrant as per two-level design (22 factorial design) were prepared as per Table 4.

Optimization of Sweetener and Flavor: Ondansetron is slightly bitter in taste. Aspartame6 and Peppermint Flavor were selected for taste masking and improving palatability of the product. Formulations with different concentrations of both aspartame and flavor were prepared and given to volunteers. Based on the taste panel outcome, following concentration of sweetener and flavor were finalized;

TABLE 2A: OPTIMIZATION OF SWEETENER

TABLE 2B: OPTIMIZATION OF FLAVOR

Palatability was good in all experiments (F6 to F9) with different concentration of flavor, so 0.9% of flavor was finalized.

Optimization of Granulation Solvent: Tablets manufactured by both aqueous and hydro alcoholic solution of sodium lauryl sulphate were evaluated for all parameters like disintegration time and it was observed that tablets prepared with aqueous granulation require little more compression force to compress the tablets at the desired hardness level and also its disintegration time was more than the tablets prepared using hydro alcoholic solution. This may be because of hard nature of granules prepared by aqueous granulation which take more force to compress into tablets.

Generally, hard granules also take time to get proper wetting and disintegrate. The granules prepared by hydro alcoholic solution appear to be less hard and required comparatively less compression force to compress into tablets and also disintegrate faster when compared to tablets prepared by aqueous granulation. So granulation with hydro alcoholic solution was finalized.

Optimization of Binder and Disintegrant by Design of Experiment: To optimize the ratio of binder and disintegrant, two level design (22 factorial design) with three center points was applied. It has two factors, each at two levels. These are referred to as low and high levels and are numerically expressed as -1 and +1.

Three experiments were conducted by keeping level of both the binder and disintegrant at intermediate level (numerically expressed as 0, 0) and is referred as three center points.

Keeping hardness and friability (less than 1%) fixed for all these experiments, disintegration time was considered as the response factor: Design layout of these experiments is tabulated in Table 4.

Results of ANOVA analysis using Design Expert® is tabulated in Table 6. ANOVA analysis reveals that Linear Model was significant (p=0.0156) with good regression parameters (R2: 0.8750 & Pred R2: 0.8067). Lack of fit was also observed to be insignificant. Effect analysis graphically depict that disintegration time tends to increase with binder amount, however, it decreases with increase in the disintegrant amount. Figure 3 shows 3 D picture of effect of binder and disintegrant on disintegration time.

3-D surface graphs as per figures 3 and 4 reveal that the Binder amount has relatively higher impact on response than disintegrant amount. 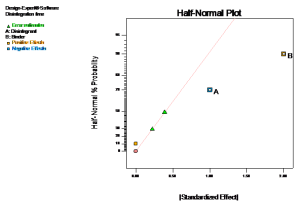 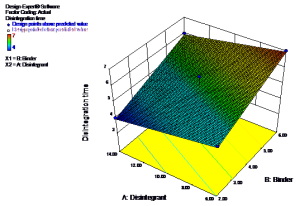 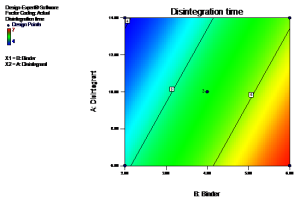 Optimization of Disintegration Time: Lower and upper limit of both Disintegrant and Binder and desired range of disintegration time is tabulated in Table 7.

Overlay plot as per figure 5 shows that yellow region (lower part of plot) is the region with disintegration time less than 6 sec. This is the design space created for this formulation. 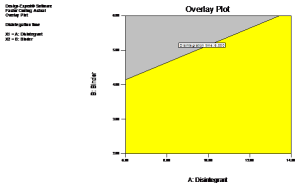 Based on earlier taste panel results on vounteers, we have already finalized the concentation of sweetener and flavor that is 3.9% and 0.9% respectively.

So following optimized composition of Ondansetron Orally disintegrating tablets as per Table 8 has been finalized.

Ratio of excipients in both Ondansetron Orally Disintegrating Tablets strengths (that is 4 and 8 mg) were similar and compressed using rotary compression machine and product characteristics of both the strengths is given in the Table 9.

All the tablets passed the Fineness of dispersion test. 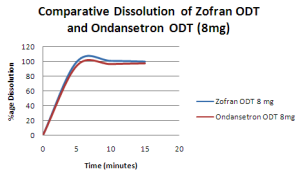 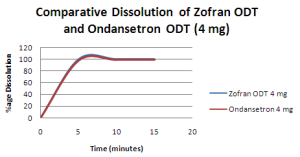 Stability Studies: The above formulation was packed in HDPE bottles with Silica gel and charged for stability8 at 40oC ± 75%RH and evaluated for description, hardness, friability, disintegration time, drug content and dissolution for 3 months. The formulation was found to be stable at accelerated condition for three months.

CONCLUSION: We demonstrated that Ondansetron Orally disintegrating Tablets have been  prepared by conventional tablet technology which is similar in quality attribute to the lyophilized formulation and also overcome disadvantage associated with lyophilized technology.

It was concluded that fomulation of Ondnsetron Orally disintegrating can be prepared successfully with the desired charateristics like good hardness, low friability, good dissolution and good stability with wet granulation process by carefully optimizing the  critical excipients. This method to prepare ODT is simple and does not require special equipment, this technology is expected to provide better ODTs for many kind of drugs that can provide quality product to patients at an affordable price.