ABSTRACT: The purpose of this study was to design and evaluate Amoxicillin trihydrate floating granules by melt granulation technique using Gelucire 43/01 and Campritol 888 ATO as lipid carriers. Polymers HPMC K4M and Ethyl Cellulose as release rate modifiers. The granules were evaluated by FTIR studies, differential scanning calorimetry, Scanning Electron microscopy, drug content, in vitro floating ability and in vitro drug release. The optimized formulation showed good floating ability and 98% drug was released in 12 h with both lipid carriers. The drug release from optimized formulations F3 and F9 followed zero order patterns and governed by Non-Fickian mechanism which was confirmed by the ‘n’ values of Koresmeyer Peppas equations. Formulations of Gelucire 43/01 had shown superior retardation and floating characteristics compared to that of Campritol 888 ATO. In conclusion, hydrophobic lipid, Gelucire 43/01 can be considered as an effective carrier for design of a multiunit floating drug delivery system of highly water - soluble drugs such as Amoxicillin trihydrate.

INTRODUCTION: The Oral route currently represents the most predominant and preferable route of drug delivery. Oral drug delivery systems have progressed from conventional immediate release to site-specific delivery over a period of time. The single-unit systems such as tablets and capsules which exhibit all or none emptying phenomena can be overcome by the design of multi-unit systems such as pellets and granules which may be more suitable because they claim to reduce the inter-subject variability in absorption and lower the probability of dose dumping 2. Floating drug delivery systems were first discovered by Davis in 1968.

These systems prolong the gastric residence time and remain buoyant in the stomach for prolonged period of time without affecting the gastric emptying rate of other contents 8. These floating granules were prepared by melt granulation technique which is less time consuming; enhance the solubility and dissolution rate of poorly water soluble drugs 6. Amoxicillin is a semi-synthetic β-lactum antibiotic effective against Helicobacter pylori infections.

Amoxicillin trihydrate is considered as a good candidate for incorporation in a gastro-retentive dosage form due to its high solubility in stomach pH than in the small intestine pH. Lipid excipients like Gelucires, Campritol 888 ATO, Chitin are used in the preparation of sustained release formulations. HPMC K4M is used as swellable polymer which forms a gel layer over the drug for controlled release. Ethyl cellulose is another polymer used which retards the disintegration and also dissolution.

A possible interaction between drug and polymers was also investigated by Fourier Transform Infrared Spectroscopy (FTIR) and differential scanning calorimetry (DSC) study. The objective of this study is to formulate Amoxicillin trihydrate (AT) multi unit floating granules by using lipid excipients and release rate modifiers and was evaluated using DSC, FTIR and  for in vitro drug release characteristics.

Solubility of Amoxicillin Trihydrate: Excess samples were placed in 0.1N HCl, pH 6.8 phosphate buffer and water and placed on horizontal shaker for 24 hr at 37 °C. The supernatant was filtered and the filtrate was diluted with respective solvents. Then values were observed using UV - Visible spectrophotometer (Elico, SL - 159, India) at ƛmax of 272 nm Table 2. 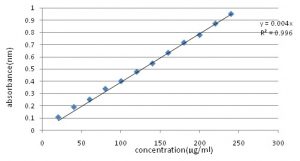 Fourier Transform Infrared (FT - IR) Spectroscopy: The FTIR spectra of samples were obtained using FTIR spectrophotometer (Perkin Elmer, FT - I Insf, USA) by KBr method. Pure AT, individual polymers, physical mixtures and optimized formulations were subjected to FTIR study. Samples were mixed with dry crystalline KBr in a 1:100 (sample: KBr) ratio and pellets were prepared. The spectrum of samples was obtained within the wave number region from 3500 to 700 cm-1 Fig. 2. 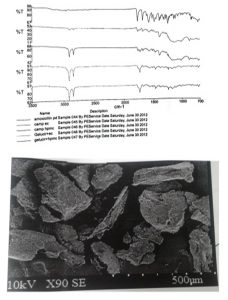 Differential Scanning Calorimetry (DSC): DSC experiments were carried out to find the presence of any interaction between the drug and excipients (Agarwal A. M. et al., 2003). 5 - 15 mg of samples were pierced in DSC aluminium pan and scanned in the temperature range of 50 - 250 °C. The heating rate was 10 °C / min. Liquid nitrogen served as purged gas. Indium is used as reference. The differential thermal analyser (DSC 822e/200, Mettler Toledo, Switzerland) was used for this purpose Fig. 3. 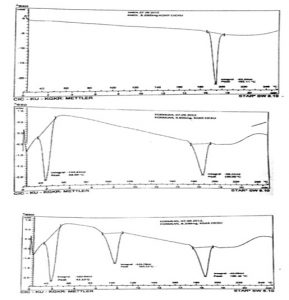 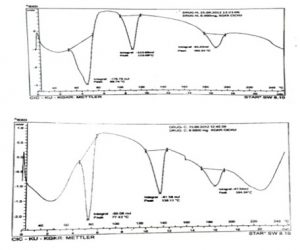 Preparation of AT floating Granules by Melt Granulation Technique: Floating granules containing AT, lipids of various ratios (drug; lipid: 1:1, 1:1.25 and 1:1.5) prepared by using melt granulation technique. The polymers added were HPMC K4M, 0.5 parts and ethyl cellulose, 0.1 and 0.2 parts to the optimized formulation.

Lipids, Gelucire 43/01 and Campritol 888 ATO were melted separately at 50 °C and 74 °C respectively, to which drug and drug additive mixture was added, mixed well and cooled to RT. The mass was then passed through 850 µm sieve to obtain uniform sized granules 7 Table 3 and 4.

In vitro Buoyancy Study: The in vitro buoyancy was characterized by floating lag time and total floating time Table 5. The test was performed using USP 24 type II dissolution test apparatus (Electrolab TDT-06P, Mumbai, India) by placing 500 mg granules in 900 ml of simulated gastric fluid pH 1.2 at 100 rpm at 37 ± 0.5 °C temperature. The time required for the granules to rise to the surface of the dissolution medium and the duration of time the granules constantly floated on the dissolution medium were noted as floating lag time and total floating time respectively 5.

Drug Content and Percentage Yield: 10 mg of granules were added to 10 ml of distilled water, heated to 60 °C to 70 °C, and allowed to cool to room temperature. The lipid was solidified and the drug solution was filtered through Whatman No.1 paper. The filtrate samples were analyzed for drug content using UV spectrometry (Elico, SL-159, India) at 272 nm after suitable dilutions. Drug stability in the dissolution medium and distilled water was checked for a period of 8 hrs. Determinations were performed in triplicate. Percentage yield of each formulation was calculated Table 6.

Scanning Electron Microscopy: SEM studies were performed for the optimized formulation to determine the surface morphology of floating granules. The magnification of the technique was X90 (Fig. 3 it’s already mentioned above).

In vitro Dissolution Studies: The dissolution test was performed using 900 ml of 0.1N HCl at 37 ± 0.5 °C and 50 rpm using USP Type II dissolution apparatus. At predetermined time intervals samples (5 ml) were collected and replaced with same volume of fresh media. The absorbances of these solutions were estimated using UV-Visible spectrophotometer at ƛmax of 272 nm3 Table 7, 8, 9, 10 and Fig. 4 and 5. 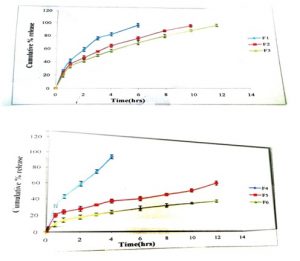 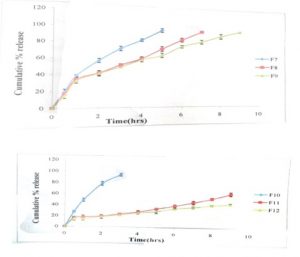 Mathematical Modelling of Release Profiles: In order to establish the mechanism of drug release from the granules, the experimental data was fitted to different kinetic models. The drug release data was subjected to various mathematical kinetic models like zero order, first order, Higuchi’s model and Korsmeyer’s model, when the release mechanism is not well known or when more than one type of release phenomena could be involved. The ‘n’ value could be used to characterize different release mechanisms 4 Table 11.

TABLE 2: SOLUBILITY STUDY DATA OF AT

The magnification o the technique was X90. The size of the granules was found to be 500 µm.

CONCLUSION: The present study showed that there is no incompatibility between Amoxicillin trihydrate, lipids (Gelucire 43/01 and Campritol 888 ATO) and various polymers by performing FT- IR and DSC studies. Formulations F3 and F9 showed better controlled release and floating properties I comparison to other formulations.

The drug release showed zero order patterns for F3 and F9 and the release pattern was governed by non-fickian mechanism which was confirmed by release exponent ‘n’ values. Thus, formulations with Gelucire 43/01 showed superior release and floating properties than the formulations with Campritol 888 ATO. Thus, Gelucire 43/01 can be a good carrier for a multi unit floating drug delivery systems.

ACKNOWLEDGEMENT: I am sincerely indebted to AICTE, New Delhi for providing financial assistance in the form of scholarship during my work.