ABSTRACT: The main of this study was production of floating tablets to maintain the drug stay in its absorption area. Ciprofloxacin is better absorbed in the stomach because of this reason floating matrix tablet was prepared using novel sintering technique with sodium bicarbonate as gas generating agent and a polymer eudragit robust formulation was decided on the basis of floating time and in-vitro drug release with possible less polymer concentration, time of exposure and at low temperature. Three batches were prepared with hardness between 4-6 kg/cm2 based on time of exposure at particular sintering temperature desired total floating time, and drug release was retarded up to 12 h. Hence, it is evident from this investigation that a floating matrix tablet using the sintering technique could be promising delivery with improved sustained release action and drug availability.

INTRODUCTION: Sintering is characterized as the bonding between particles by the application of heat. The conventional sintering technique involves heating at a temperature below the melting point of solid constituents in a controlled environment 1, 2. The process of sintering may affect the pore structure and strength of matrix tablets 3. Controlled gastric retention of solid dosage forms may be achieved by the mechanism of floating systems. The principle of buoyant preparation offered a residence time for the dosage form and sustained drug release 4. The significant problem may arise due to there may be a narrow absorption window, local action, or poorly soluble in the intestine.

Thus, the main issue in the development of a floating tablet is not just to prolong the delivery of drugs more than 12 h but to maintain the presence of dosage form in the stomach over a desired period of time 5. Ciprofloxacin is a fluoroquinolone antibacterial which is widely absorbed from the stomach and upper GIT. 70% of oral bioavailability with peak plasma concentration is within 1-2 h. Absorption becomes less as the drug passes beyond this 6-8. The main objective of this investigation was to formulate a floating tablet using a gas generating agent component with set limits of dissolution profile and minimum floating ability for 8h and tablets were placed in thermal sintering temperature to improve floating ability and dissolution profile.

MATERIALS AND METHODS: Ciprofloxacin and eudragit were procured from yarrow chem products (Ghatkopar West Mumbai). Sodium bicarbonate (Merck, Germany) was used. Materials and excipients used were USP grades. All other ingredients were of analytical grades.

Preparation of Thermally Sintered Floating Tablets of Ciprofloxacin: The formulations CE1 and CE2 tablets were exposed to 50 °C, 55 °C and 60 °C for 1 h, 2.5 h and 4 h in a hot air oven. After exposure to the respective temperature at different time, tablets were removed and cooled to room temperature.

Floating Behavior of Tablets: In-vitro floating behavior of the tablets was studied in 900 ml of 0.1 N HCl. The duration of floating is the time the tablet floats in the dissolution medium, including buoyancy lag time 9.

In-vitro Drug Release: Drug release studies were done using the USP paddle method by placing the tablets in 900 ml of 0.1N HCl buffer solution pH 1.2 at 37 °C. Samples were withdrawn, and concentration was estimated using a UV spectro-photometer at 278 nm10.

Evaluation of Mechanism of Release: The drug release mechanism was determined by fitting the release data to the various kinetic equations such as zero-order, first-order, and Korsmeyer-Peppas and finding the regression values of the release profile corresponding to each model. Zero-order kinetics zero order as the cumulative amount of drug released versus time,

Where K0 = zero-order rate constant and is expressed in units of concentration/time (h). First-order kinetics First order as cumulative log percentage of drug remaining versus time,

Where, C0 = initial concentration of the drug, K = first-order constant and T = time Korsmayer Peppas equations log cumulative percentage of drug released versus log time, and the exponent n will be calculated;

Where, Mt / M∞ = fractional solute release, T = time, K = kinetic constant characteristics of the drug/polymer system and n = exponent, which characterizes the mechanism f release of tracers. If the exponent N = 0.45, then drug release mechanism is fickian diffusion and if 0.45 < n < 0.89, then it is non-fickian or anomalous diffusion.

Drug Polymer Interaction FTIR Study: The pellets of the drug were prepared using potassium bromide by compressing at 20 psi for 10 min on KBr press, and the spectra were scanned in the wavenumber range 600 cm-1 - 4000 cm-1. FTIR study was carried on a drug and physical mixture of drug and polymer.

RESULTS AND DISCUSSION: Table 2, 3, and 4 depicts the physical parameters and floating time of all the fabricated unsintered and sintered tablets. Fig. 1, 2, and 3 reflect the in-vitro release of the drug from these tablets. Hardness was maintained in the range of 4-6 kg/cm2. All batches were very much within the designated assay range of 99-101%. The percentage weight variation test for all the formulation batches is under 5%. The floating lag time of all unsintered and sintered tablets was within range of 58 to 153 sec. The in-vitro drug release of unsintered tablets of CE1, CE2, and CE3 was more than 98% retarded up to 6 h, 8 h, and 10 h, respectively. The CE2 was selected because the desired drug release was maintained up to 8 h. 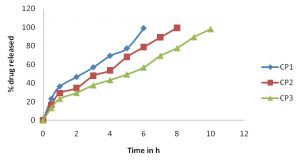 TABLE 3: CHARACTERISTICS OF TABLET AND IN-VITRO FLOATING BEHAVIOUR OF CE1 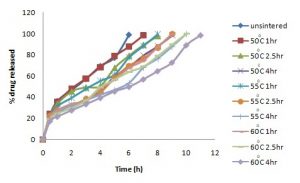 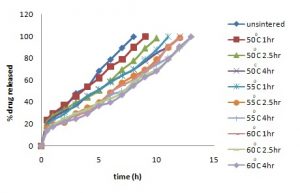 The dissolution profiles of ciprofloxacin from eudragit sintered matrix tablet for various times are shown in Fig. 2-3. The sintering time and temperature markedly affected the drug release characteristics and in-vitro floating behavior. As the sintering temperature and time of exposure, floating lag time was decreased, and drug release was prolonged.

Because of the thermal treatment of the tablet matrix, it promotes the better distribution of polymer throughout the matrix at the same time, increases the bond strength and thus strengthened the polymer network by ensuring complete coalescence of the particles inside the matrix. When the tablets are exposed to the temperature, the polymer may move through the matrix of the tablet and fill between the pores and coat the drug particles. These types of changes in tablets result in a matrix structure that decreases the drug release and increases entrapment of gas generated from the gas generating agent results decrease in floating lag time. The optimized formula CE2 tablets of sintered at 55 °C 2.5 h with lag time 90 sec and drug release retarded up to desired 12 h, which follows zero-order with non-fickian diffusion mechanism. The curve fitting method of zero order, first order, Higuchi model, and Peppas for analysis of drug release kinetics are given in Tables 5 and 6. Formulation CE1 and CE2 drug release kinetic data shows zero order follows with non-fickian diffusion mechanism.

TABLE 4: CHARACTERISTICS OF TABLET AND IN-VITRO FLOATING BEHAVIOUR OF CE2

FTIR Study: In FTIR spectra characteristic peak was observed between 3,350 and 3300 cm-1, which was assigned to stretching vibration of OH groups and intermolecular hydrogen bonding. The 1,000 to 1,750 cm-1 region exhibited absorption from a variety of double-bonded functional groups. The band at 1,750 to 1,700 cm-1 represented the carbonyl C=O stretching. The peak was observed 1,650, and 1600 cm-1 was assigned to quinolones. C-O band observed between 1400 to 1350 cm-1. Bending vibration of the O-H group observed at 1200 cm-1 to 1250 cm-1, which proved the presence of carboxylic acid.

C-F group observed between 1050 and 1000 cm-1. From FTIR spectra, it is evident that there is no interaction between drug and polymer. 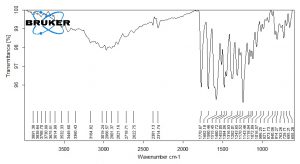 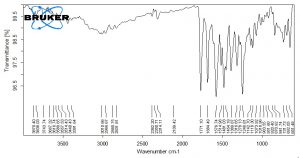 CONCLUSION: The present study was showed that drug release prolongation after thermal sintering attributed the polymer chain movement and redistribution of the polymer matrix structure. Because of this, floating lag time was decreased with the thermal treating and time of exposure. So, it concluded that floating tablets with thermal treating could be used.