The use of medicinal plants as raw material in the production of drugs is again gaining popularity. Monechma ciliatum has many traditional uses and applications in African folk’s medicines, e.g. the seed's powder macerated in water and drunk or burnt as an inhalation for treatment cold and allergic conditions. The aim of this study is to formulate a suitable dosage form (tablets) from Monechma ciliatum seed's ethanolic extract. In the process of formulating of low cost, safe, effective and reproducible dosage form the wet granulation method was used. After preformulation studies, two formulae were prepared, formula-1 by using starch as a binder and disintegrant, formula-2 by using polyvinyl pyrrolidine (PVP) and cross carmellose cellulose (CCS) as a binder and disintegrant respectively. The use of starch as disintegrant in tablets of formula- 1, gave the disintegration time of 8: 33 min: sec, while the disintegration time for tablets of formula- 2 was 11: 667 min: sec by using the high cost super disintegrant CCS. Coloring agent was not needed, as the extract was mutually colored (acceptable pale brown color). Also sweetening agent was not added, as the high content of lactose per tablet masked the bitter taste of the extract. The quality control (QC) tests were carried out and good results were obtained for both formulae. QC test results complied with the requirements stated in official British and American pharmacopeias. The carried out tests were: weight variation, friability, hardness, disintegration and dissolution tests (carried out by using two different dissolution mediums and the dissolution rate was measured at different time intervals).  The ongoing stability studies were carried out for tablets of formula-1 and gave positive results.

INTRODUCTION: Infection remains the main cause of morbidity and mortality in man, particularly in under- developed areas where it is associated with poverty and overcrowding. Increased global mobility has aided the spread of infectious disease and allowed previously localized pathogens to establish themselves worldwide.

Deteriorating social conditions in the inner city areas of our major conurbations have facilitated the resurgence of Tuberculosis and other infection. Changes in farming and food processing methods have contributed to an increase in the incidence of food - and water -borne disease. Infectious diseases cause nearly 25% of all human death 1.

Respiratory tract infections are the most common types of infectious diseases in African countries, due to poverty and bad hygiene. The plant Monechma ciliatum is distributed throughout tropical Africa, as wild in savanna and also cultivated. In Sudan, it locally known as 'Elmahlab Elaswad', it grows in western and southwestern parts of Sudan, especially in the Nuba Mountains and Gabel Mara area. In Nigeria it is known as 'Bakin mata' in Hausa language.

The present study aimed to utilizing information available in Sudanese traditional medicine to formulate this herb into a suitable dosage form, so as to be a useful therapeutic agent to respiratory tract infectious diseases. Extensive experimental work was carried out by Oshi et al 5, on the seeds of this herb to select the most suitable extraction methods (maceration, infusion, decoction and hot continuous extraction) for antimicrobial activity tests against gram positive bacteria, gram negative bacteria and fungi, particularly those cause respiratory tract infections.

The oral route is by far the most common means for ingesting drugs into the body. It is also the favored route due to the low cost of drug treatment, management, and patient compliance resulting from convenience of oral drug administration 6.

Compared to other dosage forms, tablets are the manufacturer's dosage form of choice because of their relatively low cost of manufacture, package, and shipment; increased stability; and virtual temper resistance. Tablets are defined as: unit form of solid medicament prepared by compaction. Most consist of a mixture of powder that is compacted in a die to produce a single, rigid body. Although tablets can be defined as a circular disc with either flat or convex  faces, they can be produced in a wide variety of size, shapes, and surface marking depending upon the design of punches and dies 7.

The seed: The seeds of Monechma ciliatum were collected from Nubia Mountains (South Kordofan state, Sudan). The seeds were identified and authenticated at the Medicinal and Aromatic Plant Research Institute (MAPRI) of Khartoum-Sudan. The seeds were collected between September and December (autumn season), dried under shade and stored in a covered bottle at room temperature until required for use

Preparation of the extract The extract was prepared according to method described by Oshi et al, 5,as following:The dried seeds were ground into a powder using mortar and pestle and sieved through mesh No. 35. 20g of the coarse powder weighed, and transferred to flask containing 400mL of 70% (v/v). The flask was allowed for 24h at room temperature, with occasional shaking. Then, the extract of was passed through a cotton wool and the solid residue (marc) pressed (screw press). The strained and expressed liquid obtained were mixed, put for 12h for clarification and filtrated by Whatman filter paper No. 42 (125 mm).  Finally, the filtrate was evaporated using rotary evaporator under reduced pressure at 40oC, placed in a Petri dish, and left to dry to constant weight.

RESULTS AND DISCUSSION: The crude extract was formulated as the active ingredient in tablet dosage form using wet granulation method.The whole plant extract was chosen for the test due to the probability of synergistic action. As phytomedicines gain popularity, it is essential to educate the medical and scientiﬁc establishment that the pharmacological model of isolating constituents may not be the best methodology for the study of herbal medicines.

If a chemical matrix is necessary for activity in phytomedicines, then many remedies from the puriﬁcation process from whole plant to isolated constituent may be overlooked. Ultimately, effective research into the mechanisms of actions of phytomedicines will need to account for the possibility, indeed the probability, of synergistic activity between multiple constituents 12.

The values of preformulation parameters of both formulae evaluated were found to be within the prescribed limits and indicated good free flowability (Tables 2 to 7). The data obtained of post-compression parameters such as hardness, thickness, friability, weight variation, disintegration ,dissolution and stability study  are shown in (Tables 8 to 18) and (figures 1 to 2).

Tablets of both formulae were of uniform weight (due to uniform granule particle size distribution and good flow), with acceptable variation as per USP 9 specifications 1.175 and 2.066 for formulae 1and 2 respectively, i.e. below 5%.

The second quality control test was friability test was carried out for tablets of both Formulae (1  and 2) loss percentage of 0.09% and 0.395% obtained respectively, which can be taken as success according to USP 10 which permit loss of up to 1%.

Formula-1 tablets were selected for further dissolution and stability studies. As the formulated material was from natural plant origin that needs unusual methods to assay, marker selection method was used for the dissolution test using the UV spectrophotometer at wavelength 275nm for the calibration curve of extract. The absorbencies obtained from the tablets were referred to the curves (Figure 1 and 2), and the percent dissolved calculated in different time intervals (Table 14). 0.01M HCl was better than distilled water as dissolution medium, this was attributed to the relatively weak alkalinity of the extract (pH 7.5). Therefore, 0.01M HCl was proposed as dissolution medium for further stability tests.

All quality control tests were analyzed statistically by using SPSS statistical program and no significant changes in all tests (p<0.05) recorded.

TABLE 1: FORMULATION DESIGN OF BOTH FORMULAE OF CONVENTIONAL TABLETS OF EXTRACT

TABLE 2: SOME ORGANOLEPTIC PROPERTIES OF THE EXTRACT

TABLE 4: ANGLE OF REPOSE OF BOTH FORMULAE

TABLE 5: THE BULK AND TAPPED DENSITIES OF BOTH FORMULAE

TABLE 6: CARR'S INDEX OF FINAL- BLENDED GRANULE OF BOTH FORMULAE

TABLE 8:  WEIGHT VARIATION TEST RESULTS FOR THE THREE BATCHES OF TABLETS OF BOTH FORMULAE

TABLE 9:  THE STANDARD DEVIATION AND PERCENT DEVIATION FOR BOTH FORMULAE 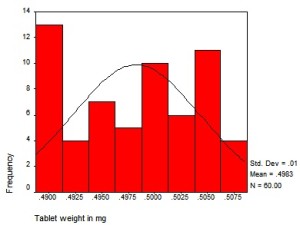 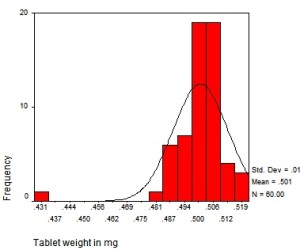 TABLE 11:  FRIABILITY TEST RESULTS OF TABLETS OF BOTH FORMULAE

TABLE 12:  HARDNESS TEST RESULTS FOR TABLETS OF BOTH FORMULAE 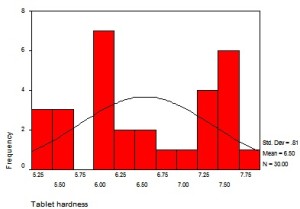 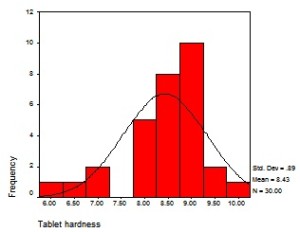 TABLE 14: DISINTEGRATION TEST RESULTS FOR TABLETS OF BOTH FORMULAE

TABLE 15:  THE ABSORBANCE DATA BY USING HCL AND WATER AS DISSOLUTION MEDIUM 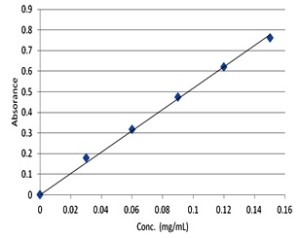 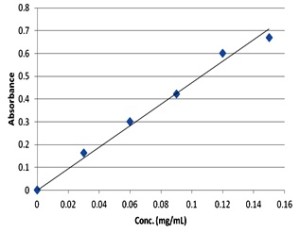 CONCLUSION: Tablet of both formulae complied with the standard requirements of precompression parameters (flow properties, density, particle size …) and post-compression parameters (weight variation, friability, hardness, disintegration, and dissolution). A cost effective formulation was adopted using starch as binder and disintegrant. The high hardness test results shown in tablets of formula- 2, was attributed to the presence of the polymer PVP as binder. The formulated tablet did not need coating as the bitter taste of the extract was masked by the relative high amount of lactose per tablet.

The dissolution test of tablets of formula-1 was carried out to assay the amount of the dissolved ingredients, by measuring the amount of the dissolved ingredients in different time intervals (10, 20, 30, 40, and 45 minutes), which gave positive scientific prediction about the pharmacokinetics and bioavailability. Tablets of formula- 1 were stable for nine months as shown in the ongoing stability results.  It could be concluded that the starch based tablets of extract would be quite effective that superdisintegrant based tablets of extract (more acceptable precompression and post compression parameters).

Further optimization of excipients concentration of tablets of formula- 1 is strongly recommended by using ANOVA system.

ACKNOWLEDGMENT: The authors are thankful to department of Pharmaceutical Technology, faculty of Pharmacy- Omdurman Islamic University for providing excellent facilities to carry out this work.