ABSTRACT: The work was under taken as an attempt to prepare quick release films of ebastine with the purpose of developing a dosage form for very quickly on set of action, which will be beneficial in managing severe condition of allergies, aiding in enhancement of bioavailability. It is necessary to prepare ebastine as fast dissolving oral films to bypass the first pass metabolism. Ebastine was prepared as solid dispersion. Ebastine solid dispersion was incorporated in a different concentration of polymers such as pullulan, HPMC and PVP for the development of fast dissolving films. Propylene glycol was used as a plasticizer and aspartame as a sweetener. Films were prepared by a solvent casting method. The developed films were subjected for the physicochemical characterization such as uniformity of thickness, uniformity of weight, tensile strength and % elongation, folding endurance, surface pH, drug content uniformity, disintegration time, in-vitro drug release and ex-vivo permeation study. The formulations showed disintegration time within 25 sec. FB5 was found to be the best formulation, and has shown an ex-vivo permeation of 88.72% within 10 min. It was concluded that the films containing solid dispersion of ebastine showed improved solubility and bioavailability. Fast dissolving films can be a potential novel drug dosage form for paediatric, geriatric and also for general population.

INTRODUCTION: In recent times fast dissolving dosage forms have been gained attractiveness and acceptance as recent drug delivery systems due to their distinctive properties. They rapidly disinte-grate and dissolve in the mouth and can be administered without water, making them above all acceptable for paediatric and geriatric patients. But this also applies to the patients who are confined to bed or travelling.

The film is simply placed on patient’s tongue or any oromucosal tissue, instantly wet by the saliva due to the presence of hydrophilic polymer and other excipients, upon hydration film dissolves and release the medicaments into the oral cavity, which can be absorbed through oromucosal route or swallowed into gastrointestinal tract 1.

Ebastine is a piperidine derivative, is a long-acting, non-sedative, second-generation histamine receptor antagonist that binds preferably to the active acid metabolite, carebastine. The half life of carebastine is 15 and 19 h with 66% of the medicine being excreted in the urine mainly as conjugated metabolites. Since, ebastine is not soluble in water and as a result of which does not become rapidly bioavilable when given orally.

Thus, it has to formulate into a more soluble and more bioavailable form. In order to improve the solubility, ebastine is formulated as a solid dispersion thereby providing fast action 2.

FTIR Studies: The drug and polymer interaction studies were carried out by using FTIR studies and resulted spectra is shown in Fig. 1.

Formulation of Solid Dispersion: The solid dispersion of ebastine and carrier (PEG 6000) were taken in a ratio of 1:1, 1:2 and 1:3. The carrier was completely dissolved in ethanol in a 25 ml beaker and ebastine in dichloromethane. Both the solutions are mixed together and evaporated the solvent using a water bath. The resultant solid dispersion was collected by scrapping with a spatula, and was pulverized by crushing in a mortar and pestle. The pulverized mass was passed through the sieve #60 to obtain uniform particle size and stored in desiccator at room temperature 3.

Characterization of the Solid Dispersion: The prepared solid dispersion was evaluated for different parameters such as percentage yield, drug content and in-vitro dissolution studies.

Percentage Yield: Solid dispersion was collected and weighed to determine practical yield from the following equation. The results are shown in the Table 1.

Drug Content Analysis: The uniform distribution of ebastine in solid dispersion was confirmed by estimating the drug content in the solid dispersion. An accurately weighed quantity of solid dispersion equivalent to 10 mg of drug was taken in a 50 ml volumetric flask and dissolved in simulated salivary fluid.

The filtrate is further diluted with simulated salivary fluid pH 6.8 and the absorbance was measured at 252 nm using UV spectrophotometer against a suitable blank solution. Trials were repeated and average of six determinations was calculated. The results are shown in the Table 1.

At regular time intervals 5 ml sample were withdrawn and replenished with fresh dissolution medium. The absorbance was measured at 252 nm using UV spectrophotometer against a suitable blank solution. The results for pure drug and all the formulation of solid dispersion are given in the Table 1. The graph of the pure drug and all the solid dispersions are shown in Fig. 2.

Preparation of Fast Dissolving Films Containing Ebastine: Fast dissolving films of ebastine solid dispersion were prepared by a solvent casting method using a selective film forming polymers (HPMC15, pullulan, PVA). Polymers were weighted accurately according to the formula and soaked in water for 1 h for swelling. The solid dispersion of ebastine: PEG 4000 equivalent to 10 mg of ebastine dissolved separately in polymeric solution with continuous stirring to obtain a uniform dispersion.

Further propylene glycol, aspartame was added as plasticizer and sweetener respectively and thoroughly mixed using a magnetic stirrer. The solution was kept overnight to remove the air bubbles. Then the solution poured as a thin stream into a petri dish to ensure the uniform spread and dried for 24 h at 40 °C in a vacuum oven. The dried films were collected, packed in aluminum foil and stored until used for further study 4.

Uniformity of Film Thickness: The thickness of films was measured using a micrometer screw gauge. Each film was measured for thickness at five different positions and the mean thickness was calculated and reported. The standard range of film thickness should not be less than 5%. This is essential to assure uniformity in the thickness of the film. The result of all the formulations is given in the Table 2.

Tensile Strength and Percentage Elongation: This mechanical property was measured using Linus Bursting apparatus. Tensile strength is the maximum stress applied to a point at which the film breaks. The strips were clamped at the static end and were attached to the movable rod on the railing with the help of a clip. The weights were gradually added to the pan to increase the pull force until the film was cut. The elongation was determined simultaneously by noting the distance traveled by the pointer, before the break of the film, on the graph paper 6. The weight required to break the film was noted as the break force and reported in the Table 2.

Folding Endurance: This test indicates the capacity of the films to sustain mechanical handling as well as pliability during use in the oral cavity. A film of 2 × 2 cm was subjected to folding endurance by repeatedly folding one film at the same place till it broke or folded up. The number of times the film could be folded at the same place without breaking gives the value of folding endurance. The result of all the formulations is given in Table 3.

Surface pH Study: The film to be tested was placed in a petri dish and was moistens with 0.5 ml of distilled water and kept for 30 sec. The pH was noted after bringing the electrode of pH meter in contact with the surface of the formulation and allowing equilibrating for 1 min. The average of 10 determinations for each of the formulations was taken 7. The results for all the formulations are given in the Table 3.

Drug Content Uniformity: The film of specific area was cut and transferred into a graduated flask containing 100 ml of simulated salivary fluid pH 6.8, followed by stirring for 4 h in a magnetic stirrer. The filtered solution was then diluted with simulated salivary fluid; the absorbance was measured at 252 nm using placebo solution (film without drug) as a blank 8. Data is represented in the Table 4.

The formulated fast dissolving film of 2 × 2 cm diameter was cut and placed over the porcine oral mucosa membrane. Compartment was then placed and fixed it with the help of rubber bandages. The whole assembly was placed on a magnetic stirrer, and the solution in the receptor compartment was continuously stirred. The temperature was maintained at 37 ± 2 ºC. From that 1 ml of Sample were withdrawn at a time intervals of 1, 2, 3, 4, 5, 6, 7, 8, 9 and 10 min and were analyzed spectrophotometrically for drug content against the blank.

In-vitro Dissolution Studies: The in-vitro dissolution studies was carried out in a beaker containing 200ml of simulated salivary fluid pH 6.8 as dissolution medium, maintained at 37 ± 0.5 °C. The medium was stirred at 100 rpm. Aliquots (3 ml) of the dissolution medium were withdrawn at 5, 10, 20, 30, 40, 50, and 60 min intervals and the same amount was replaced with the fresh medium. Sample was assayed spectrophotometrically at 252 nm 10. Three trials were carried out for all the samples and the average value was calculated and data is given in the Table 5. The percentage of drug dissolved at various time intervals was calculated and plotted against time shown in Fig. 4.

Stability Studies as per ICH guidelines: Stability testing should be done at 25 °C/ 60% Rh; stress testing should be done at 40 °C/ 75% Rh for 6 month. If considerable changes occur at these stress condition, then the formulation should be tested at an intermediate condition i.e. 30 °C/ 75 % Rh. At the end of 8 weeks, fresh and 8 weeks aged samples were removed and are examined for change in appearance, drug content; surface pH and in-vitro drug release were determined 11.

Kinetic Modelling of Dissolution Data: The kinetic study of prepared formulations was determined using the data obtained from the in-vitro drug release. Different mathematical models such as zero order, first order, higuchi and korsemeyer peppas to predict the kinetics and drug release mechanism of the drug 11, 12.

Characterization of Solid Dispersion: The in- vitro dissolution studies of pure drug showed slow release where as solid dispersion showed improved dissolution. Solid dispersion containing 1:2 ratio was considered as an optimized formulation for the preparation of fast dissolving oral films. 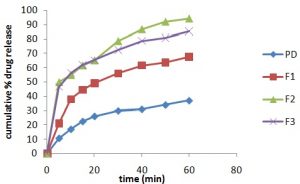 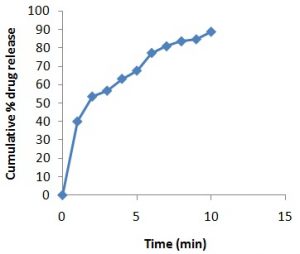 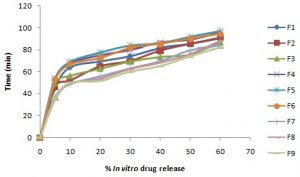 Stability Study: According to the results, there were no significant changes in visual appearance and folding endurance. Drug content did not deviated more than 2%, it indicates the drug was stable in films.

Kinetic Modelling of Dissolution Data: The in vitro drug release profile of the drug from all the formulations appears to follow 1st order kinetics.

CONCLUSION: Present study was undertaken with an intension to develop oral fast dissolving films of ebastine with improved solubility and bioavailability.

The results reveals satisfactory film parameters and formulation FB5 with pullulan has shown better in-vitro dissolution profile (97.2 ± 0.06%) in 60 min compared to other formulation. Thus the developed films can be an alternative for improving the oral bioavailability of ebastine.

ACKNOWLEDGEMENT: The authors are thankful to authorities of Nitte (Deemed to be university) and NGSM Institute of Pharmaceutical Sciences for providing all the necessary facilities for the successful completion of this research project.

CONFLICT OF INTEREST: The authors have no conflicts of interest that are directly relevant to the content of this manuscript.