DESIGN AND EVALUATION OF FAST DISSOLVING TABLET OF METOPROLOL TARTRATE

DESIGN AND EVALUATION OF FAST DISSOLVING TABLET OF METOPROLOL TARTRATE

Many patients are express difficulty in swallowing tablets and hard gelatin capsules tending to non compliance and ineffective therapy. In the present work, fast dissolving tablets of metoprolol tartrate are formulated with a view to enhance the patient compliance. It is suited for tablets undergoing high first pass metabolism and is used for improving bioavailability with reducing dosing frequency to minimize side effect. Hence the main objective of the study was to formulate fast dissolving tablets of Metoprolol tartrate to achieve a better dissolution rate and further improving the bioavailability of the drug. These tablets prepared with a various concentration (4%, 5%, 6%w/w) of superdisintegrants such as crosscarmellose sodium (CCS), crosspovidone (CP) and pregelatinized starch (PGS) along with directly compressible mannitol to enhance mouth feel. The prepared tablet were evaluated for hardness, thickness, friability, weight variation, drug content uniformity, wetting time, water absorption ratio and in- vitro dispersion time, in- vitro disintegration and in- vitro dissolution profile are found satisfactory. Among the nine formulations, the formulation F9 containing pregelatinized starch emerged as the best formulation and showed maximum dissolution rate with 99.67% drug release in 8 minutes.

INTRODUCTION: The tablet is the most widely used dosage form because of its convenience in terms of self-administration, compactness, and ease in manufacturing. However, geriatric and pediatric patients experience difficulty in swallowing conventional tablets, which leads to poor patient compliance. To overcome this weakness, scientists have developed innovative drug delivery systems known as "melt in mouth" or "mouth dissolve (MD)" tablets.

These are novel types of tablets that disintegrate or dissolve or disperse in saliva. Their characteristic advantages such as administration without water, anywhere, anytime lead to their suitability to geriatric and pediatric patients. They are also suitable for the mentally ill, bed-ridden, and patients who do not have easy access to water 1, 2. Fast Dissolving tablets (FDT) are solid dosage form containing medical substances which disintegrate rapidly, usually within few seconds when placed upon tongue requiring no additional water to facilitate swallowing 3.

Metoprolol tartrate is a β1- selective adrenoreceptor blocker used for the management of hypertension and angina pectoris However, the metoprolol tartrate freely soluble in water and extensively absorbed after oral administration. The absolute oral bioavailability is only approximately 40% due to extensive hepatic metabolism [4]. The main aim of the present work was to formulate and characterization fast dissolving tablets of metoprolol tartrate for rapid dissolution of drug and absorption, which may produce the rapid onset of action in the treatment hypertension.

MATERIAL AND METHODS: Metoprolol tartrate and Crosscarmellose sodium were obtained from Micro labs (Hosur, India) and Crosspovidone, Pregelatinized starch, and Mannitol were obtained as gift samples from Aurobindo labs (Hyderabad, India). Microcrystalline cellulose and colloidal silicon dioxide (Aerosil) were obtained from Novel drugs Ltd Chennai. Aspartame and Magnesium stearate was obtained from signet chemicals Mumbai. Fast dissolving tablet of metoprolol tartrate were prepared by direct compression method 5. The various concentration of superdisintegrant was used to prepare different formulation and compositions of various formulations are shown in Table 1. All the ingredients were weighed and mixed in mortar with the help of pestle, and then finally Magnesium Stearate and Aerosil was added material was slightly compressed on the 12 mm standard concave punch using a rotary tablet machine. The total weight of the formulation was maintained 200mg.

Preformulation studies: The FTIR spectra were obtained using KBr pressed pellet technique on a Shimadzu FTIR spectrophotometer. The scanning range was 400-4000 cm-1 and the resolution was 1 cm-1 5.

Evaluation of blends material: (Table 2): The quality of tablet, once formulated by rule is generally directed by the quality of physicochemical properties of blends. There are many formulation variables involved in the mixing step, and all these can affect the characterization of blends produced. The blends were characterized by mass volume relationship such as bulk density, tapped density, Hausner’s ratio, and compressibility index and flow properties such as angle of repose 6.

Hausner’s Ratio: This is an indirect index of ease of powder flow. It is calculated by the following formula,

Evaluation of fast dissolving tablets: All the batches of tablets were evaluated for various parameters like thickness, weight variation, hardness, and friability, drug content, results reported in Table 2 and wetting time, water absorption ratio, In vitro dispersion studies, disintegration and dissolution studies were reported in Table 3 & 4.

Thickness: The thicknesses of the tablet were measured by using a vernier caliper 8.

Weight variation test: Twenty tablets were selected at random and weighed individually; the individual weights were compared with the average weight for determination of weight variations.

Hardness test: The hardness of the tablet was determined using Monsanto Hardness Tester 9.

Wetting time: A piece of tissue paper folded twice was kept in a Petri dish containing 6 ml of purified water 10. The tablet was placed on the tissue paper and allowed to wet completely. The time required for complete wetting of the tablet was then recorded.

Where Wb and Wa are the weight before and after water absorption, respectively.

Friability test: Six tablets from each batch were examined for friability using Roche Friabilator and the equipment was run for 4 min at 25 revolutions per minute. The tablets were taken out, dedusted and reweighted and % friability was calculated.

Drug Content uniformity test: Five tablets were weighed and powdered, 50 mg of equivalent of metoprolol tartarate was weighed and dissolved in suitable quantity of Phosphate buffer pH 6.8, the solution was filtered suitably diluted and the drug content was analyzed by using UV spectrometer at 222 nm. 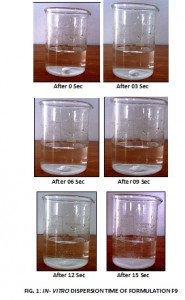 RESULT AND DISCUSSION: The use of superdisintegrant for preparation of fast dissolving tablet is highly effective and commercially feasible. These superdisintegrant  accelerate  disintegration  of tablets  by absorbs  a large  amount of  water when  exposed to  an aqueous  environment. The absorption of water results in breaking of tablets and therefore faster disintegration. The superdisintegrants such as crosscarmellose sodium, pregelatinized starch and crosspovidone were tried to achieve a fast dispersion of tablets.

All blends were evaluated and found that excellent flowability as determining by angle of repose, compressibility index and angle of repose and all batches of the tablets were preliminarily evaluated for various physical parameters such as hardness, friability, drug content, wetting time, water absorption ratio, in vitro dispersion time, disintegration and dissolution.

The result of In vitro disintegration test were within the prescribe limit the value 12.4-40.01 seconds and in vitro dispersion time was found in the range of 16.32 – 48.17 seconds. The cumulative percentage of drug release (Fig. 2, 3 & 4) of formulation F9 containing 6% of pregelatinized starch showed drug release 99.67% at the end of 8 minutes (Fig. 4) when compare with other formulation containing crosspovidone and crosscarmellose sodium due to shorter wetting time. 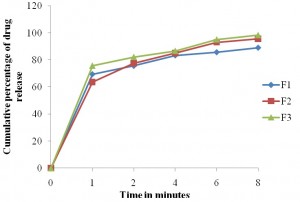 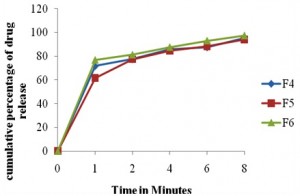 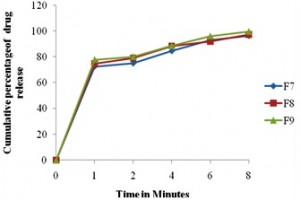 The study shows that the dissolution rate of metoprolol tartarate can be enhanced to greater extent by direct compression technique with addition of superdisintegrant.

CONCLUSION: It was concluded that fast dissolving tablets of metoprolol tartrate can be successfully prepared using selected superdisintegrants in order to improve disintegration or dissolution of the drug in oral cavity and hence better compliance and effective therapy.

ACKNOWLEDGMENT: The authors thanks to T. Jaison, Medrich Lab, Banglore, for providing gift samples of metoprolol tartrate and crosscarmellose sodium.