The purpose of the study was to design and evaluate fast dissolving carvedilol tablets using β-Cyclodextrin and superdisintegrants adopting sublimation technique. Tablets were prepared by direct compression method. Tablets were evaluated for their physico chemical properties, wetting time, disintegration, in-vitro release and stability studies. SEM analysis was carried out to determine the surface characteristics of solid dispersions. Precompressional studies revealed good micromeritic properties of powder blend for direct compression. The hardness (3.9-4.3 kg/cm2), friability (0.35-0.51), drug content (96.58-99.43 %) and disintegration time (44.05-66.21 sec) of fast dissolving tablets were found uniform and reproducible. Dissolution of tablets was directly proportional to the superdisintegrants concentration. Selected tablet (F1) was found superior than any other formulations with respect to disintegration and dissolution time.

INTRODUCTION: The concept of fast dissolving drug delivery system emerged from the desire to provide patient with conventional mean of taking their medication. Difficulty in swallowing (Dysphagia) is a common problem of all age groups, especially elderly and paediatrics, because of physiological changes associated with these groups of patients.

Solid dosage forms that can be disintegrated, dissolved, or suspended by saliva in the mouth resulting in easy swallowing can provide significant benefits to the paediatric and geriatric population, as well as other patients who prefer convenience of easily swallowable dosage form.

Fast dissolving tablets disintegrates instantaneously when placed on tongue, releasing the drug that dissolves or disperses in the saliva leading faster release of the drugs in the oral cavity 1. Cyclodextrins (cyclic linked oligosaccharides) have been shown to improve the bitter taste masking of the drug by trapping the drug within the cyclic structure long enough to render initial dissolution. The other taste masking methods are namely, coating methods including electrochemical, hot melt and super critical fluids 2, 3.

In sublimation technology, the high porosity necessary for fast disintegration is achieved by using volatile materials. Inert solid ingredients, such as urea, ammonium carbonate, ammonium bicarbonate, hexamethylene tetramine, and camphor, can volatilize readily. When these volatile materials are compressed into tablets, they can be removed via sublimation, which generates porous structures. In addition, several solvents (e.g., cyclohexane, benzene) can also be used as pore forming agents 4, 5.

Carvedilol is a novel multiple-action cardiovascular drug that is currently approved in many countries for the treatment of hypertension and used in treatment of coronary artery disease, left ventricular dysfunction following myocardial infarction and congestive heart failure 6. Carvedilol reduces the risk of death as well as the risk of hospitalization for cardiovascular causes in patients with heart failure who are receiving treatment with digoxin, diuretics and an angiotensin-converting-enzyme inhibitor. Its bioavailability is 25-35% only indicating extensive first pass metabolism in liver which is an ideal feature for rapid release drug delivery system 7.

Preparation of complex of Carvedilol with Beta cyclodextrin: A mixture of carvedilol and b cyclodextrin in 1:2 ratio was grounded in motar by adding hydro alcoholic solution (ethanol: water = 15:85) and kneaded thoroughly with a pestle to obtain a paste which was dried under vacuum at room temperature passed through sieve no.60 and stored in a desiccator.

Solubility studies of Carvedilol and Solid Dispersion: The solubility of carvedilol and its solid dispersion prepared was determined in phosphate buffer of pH 6.8. The solubility study was conducted by taking excess amount of the drug and solid dispersions in 10 ml of buffer solution. Then the samples were kept in the water bath shaker and agitated for 24 h at 37 ± 0.5°C. The samples were filtered and diluted suitably with buffer solution. The samples were analyzed spectrophotometrically at 242 nm. The concentration of drug was determined.

In-vitro dissolution of Solid Dispersion: In-vitro drug release for prepared solid dispersion were carried out using USP XXIV (Type II) dissolution apparatus at 37±0.5°C and 100 rpm speed using 900 ml of phosphate buffer pH 6.8 as dissolution medium. At a predetermined interval of time 5 ml of sample was withdrawn and replaced with fresh medium. After filtration and appropriate dilution, the samples were analysed at 242 nm for carvedilol by UV-visible spectrophotometer against blank. The amounts of drug present in samples were calculated. The test was done in triplicate.

Where, h is height of the pile and r is radius of the pile. The test was repeated thrice.

Carr’s Index 9: The compressibility of sample blend was determined from their apparent bulk density and the tapped densities by using the following formula. The test was carried out in triplicate.

Preparation of Tablets by Sublimation Technique: The solid dispersions equivalent to 12.5 mg of carvedilol, diluents, superdisintegrants, sublimating agent and sweetening agent were passed through sieve no.60 and mixed together. Magnesium stearate and aerosil passed from mesh no.80 were mixed and blended with above mixture. Then the tablets were prepared by direct compression method using 4 mm flat punches on a 10 station rotary compression machine. After compression the tablets were heated by vacuum drying technique at 45oC until a constant weight was obtained to ensure the complete removal of sublimable component. The sublimable component was removed to make the tablet porous. The various tablets were formulated as per Table 3.

The tablets were de-dusted and reweighed. Friability (F) was calculated using the following formula.

Where, W0 and W are the weight of the tablets before after the test respectively. The test was done in triplicate.

The tablets that loose less than 1% weight were considered to be compliant. 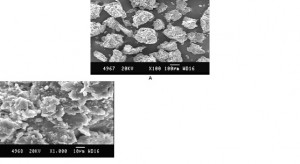 FIG. 1: SCANNING ELECTRON MICROSCOPY (SEM) OF SOLID DISPERSION (A) AND ITS SURFACE (B) 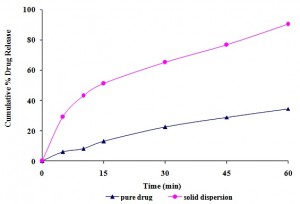 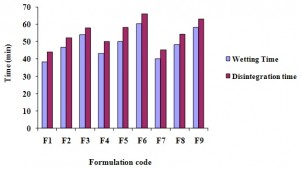 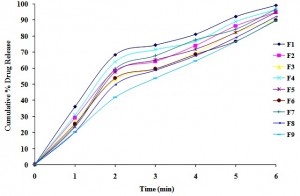 TABLE 8: STABILITY DATA OF F1 AFTER ONE MONTH STUDY.

In-vitro release of pure drug and solid dispersion in pH 6.8 was found 34.55 and 90.36% respectively at the end of 60 min. Studies showed that solid dispersion have enhanced the drug solubility and dissolution rates. The results are shown in Table 2 and Fig 2. Fig. 1 shows different magnifications of SEM micro-photographs of solid dispersion and their surfaces.

Particles appear as irregular shaped agglomerates with rough surface indicating an amorphous nature. The surface topography shows presence of less crystalline drug, uniformly and finely dispersed or adhered to the carrier surface was observed in solid dispersion. Fast dissolving tablets were prepared by using super-disintegrants like CCS, SSG and Indion-414 in three different concentrations 1.5, 3 and 4.5% w/w of tablets.

Magnesium stearate and aerosil were used as lubricants and antadherent to facilitate easy compression and ejection of tablets. Sucralose as sweetening agent was used. Menthol was used as sublimating agent which facilitates faster disintegration of tablets. The compositions of different fast dissolving tablets are shown in the Table 3.

The method employed for preparation of FDTs in the study was direct compression for which the drug or the mixture of drug and polymer should posses good flow properties. Table 4 shows the micromeritic property of precompressional mixture. Studies showed the angle of repose value of 13.32-16.54o indicating good flow property. Bulk density was found in between 0.40-0.54 gm/cm2 and tapped density between 0.47-0.59% gm/cm2 for all the formulations.

From density data % compressibility was calculated. It was further supported by good carr’s index value of 10.16-14.89% and Hausner’s ratio of 1.01-1.22 for all precompressional mixtures. Hence powder mixture was found suitable for direct compression method. Further the tablets were subjected to physico-chemical evaluation. The results of physicochemical evaluation of tablets are given in Table 5.

As the material was free flowing, tablets were obtained of uniform weight due to uniform die filling. Hardness of tablets was between 3.8-4.3 kg/cm2 for all the formulations. The thickness was found in range of 4.28-4.33 mm. Friability was found in between 0.35-0.51. The value below 1% was an indication of good mechanical resistance of the tablet. The drug content was found to be 96.58-99.43 % which was with in the acceptable limits.

The porous structure is responsible for faster water uptake hence it facilitates wicking and swelling of superdisintegrants in bringing about faster disintegration. The results are shown in Table 6 and Fig 3. The in-vitro dissolution of carvedilol tablets was studied in phosphate buffer of pH 6.8 using USP XXIV dissolution test apparatus by paddle method.

Sublimation technique was adopted to enhance the dissolution of Solid dispersion FDT using 7.5% w/w menthol as sublimating agent with superdisintegrants like CCS, SSG and Indion 414 (F1-F9). The release profiles indicated the faster and maximum drug release due to easy breakdown of particles due to porous structure formation after sublimation of menthol. At 4.5% superdisintegrants level the drug release at the end of 6 min were found to be 99.09, 96.42 and 96.70% with CCS, SSG and Indion-414 respectively (Fig. 4).

The release was also proportionate with superdisintegrant concentration. The results of dissolution profile of FDT were in accordance with that of disintegration data. Hence overall release data of FDT was proportionate with that of disintegration data irrespective of superdisintegrants. The stability studies were carried out for selected tablets (F1) at 40o±2C, 75% RH for one month. The fast dissolving tablets were evaluated by their drug content, disintegration and drug release. The studies indicated that no significant change in disintegration time, drug content and drug release profiles as shown in Table 8. This indicates that the tablets are stable at 40o±2C, 75% RH.

CONCLUSION: The present research work revealed that the sublimation technique along with superdisintegrants in the concentration of 4.5% can be used to enhance the disintegration and dissolution time of poorly soluble drug.

ACKNNOWLEDGEMENT: The authors are thankful to M/s Vijashree chemicals Pvt. Ltd., Hyderabad, India and Srinivas College of Pharmacy Mangalore, India for providing necessary facilities to carry out this research work.