Objective: The objective of the study is to design and evaluate oral sustained release tablet of lamotrigine using polymer such as HPMC K 4M, HPMC K 100M and methocel E50 LV at 15%, 25%, and 35% Concentration range.

Results: Pre-compression character such as compressibility index, angle of repose and Post-compressional characteristics such as weight variation, hardness, diameter, thickness, friability were found to be with in the I.P limits. In vitro release profile was studied using HPMC K4M, HPMC K 100M and methocel E50 LV at three different concentration. The percentage cumulative amount of drug release was found to be 82.72% in 12 hrs, 70.69% in 12hrs and 97.80% in 4hrs respectively for the entire batch at 15% polymer concentration.

Conclusion: The study proves that fluctuation in the drug release is overwhelmed when lamotrigine is administered in the form of SR tablet.

INTRODUCTION: Oral drug delivery continues to rise in popularity as formulation scientists look for ways to control drug release and improve patient convenience. However, developing oral controlled release tablets for water soluble drugs with constant release rate has always been a challenge to the pharmaceutical technologist 1. Most of these water-soluble drugs, if not formulated properly, may readily release the drug at a faster rate and produce a toxic concentration of the drug on oral administration. Among various dosage forms, matrix tablets are widely accepted for oral sustained release (SR) as they are simple and easy formulate. Matrix system is the release system, which prolongs and controls the release of drug that is dissolved or dispersed 2.

In recent years, considerable attention has been focused on Hydrophilic polymers in the design of oral controlled drug delivery systems because of their flexibility to obtain a desirable drug release profile, cost-effectiveness, and broad regulatory acceptance. Among the hydrophilic polymers, cellulose derivative such as hydroxypropyl methylcellulose (HPMC) and methocel is generally considered to be stable and safe as release retardant excipient in the development of oral controlled release dosage forms 3. This semisynthetic polymer is quite expensive when compared with natural polymers such as guar gum, alginates, and so forth.

Lamotrigine is an antiepileptic drug (AED) which belongs to phenyltriazine class, used in the treatment of depression and bipolar disorder and exerts its anticonvulsant effect by stabilizing presynaptic neuronal membranes. It inhibits sodium currents by selectively binding to the sodium channel and subsequently suppresses the release of the excitatory amino acid, glutamate. Various tablet formulations of lamotrigine have been approved for marketing, for instance, conventional compressed instant release (IR) tablets comprising 25 mg, 50 mg, 100 mg, 150 mg or 200 mg of active ingredient 4. These are administered once, twice, or three times daily. The peak plasma concentration of the drug is 1.4 to 4.8 hours following oral administration.  The drawback in conventional tablets is that fluctuation in the level of plasma drug concentration which leads to inability to maintain appropriate therapeutic level which results in adverse events occurring in patients or alternatively the rate of increase in plasma concentration in the initial stages before the peak plasma concentration is achieved 5-6.

Until recently the site of absorption of the drug was unknown, in carrying out a regional absorption study it has recently been discovered that the extent of absorption of lamotrigine is consistent when the drug is delivered to any point in the GIT between stomach and the ascending colon. Even though the half-life of the drug is 36 hrs due to fluctuation in the plasma drug concentration leads to therapeutic insufficiency 7. Hence formulation of sustained release tablets of lamotrigine could be a possible approach to understand and overcome the above discussed constrain. The formulations were carried out using three different polymers by wet granulation technique followed by compression and evaluated.

Bulk Density: Both loose bulk density (LBD) and tapped bulk density (TBD) were determined. A quantity of 7g of powder from each formula, previously lightly shaken to break any agglomerates formed, was introduced into a 10ml measuring cylinder. After the initial volume was observed, the cylinder was allowed to fall under its own weight onto a hard surface from the height of 2.5 cm at an interval of 2 seconds 13-15. The tapping was continued until no further change in volume was noted. LBD and TBD were calculated using the following formulas 2:

The results are discussed in table 1.

Post Compressional Evaluation: The average weight was obtained for at least 20 units, according to phramacopoeial limits. Hardness was determined for at least 10 tablets using a Hardness Tester, and adopting a minimum hardness of 3 kg as the acceptance criterion. For each formula, friability was evaluated for a sample of 20 tablets, using the acceptance criterion of a maximum loss of 1.5% of the initial weight. The physicochemical properties of formulated tablets such as compressibility index, angle of repose followed by post compressional properties such as Weight variation, Friability, Diameter, Thickness, Hardness and Drug content were carried out 16-18 (Table 2).

In-Vitro Dissolution: According to USP, dissolution test for Lamotrigine control release tablets was carried out by using distilled water as dissolution media. The type II paddle apparatus formed by a blade and a shaft as a stirring element 19. The dosage form was allowed to sink to the bottom of the flask before stirring. A constant temperature of 37±0.5oC was maintained. The motor was adjusted to turn at the specified speed of 50 rpm. Samples of specified volume were withdrawn at pre- determined time intervals, filtered, diluted suitably and assayed spectrophotometrically. Determine the amount of Lamotrigine dissolved from UV absorbance at the wavelength of maximum absorbance of about 275nm of filtered portion of the solution under test. An equal volume of fresh medium was immediately replaced to maintain the dissolution. Dissolution studies were performed thrice for 12-24 hours for each tablet formulation and the mean values were taken 20-22 (table 3, fig 1-3). 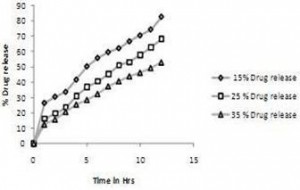 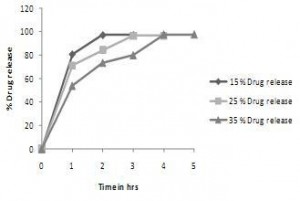 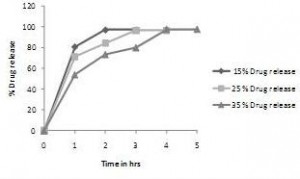 Release Kinetics: To study the mechanism of drug release from the matrix tablets, the release date were fitted to the following equations:

Where Q is the amount of drug release at time t, and k0 is the release rate;

Where k1 is the release rate constant;

Where Q is the amount of drug release at time t, and k 2 is the diffusion rate constant 23-25.

RESULTS: Pre-compressional and post-compressional character such as average weight, hardness, friability and assay of all prepared tablets were within phramacopoeial specification. The formulations were prepared using HPMC K4M, HPMC K100M, and Methocel E50 as polymers followed by evaluated. The angle of repose values obtained for the formulations K4M 15%, LE50 25% are 32o.3”, 35o.3” This indicates good flow property of the powder blend. The compressibility index values for the formulations K100M 15%, LE 50. 25% are 16.45, and 16.45. This indicates the powder blend has good flow property. The tablets size and thickness was also used to assess the quality of the tablet under uniform conditions of manufacturing process. Size of tablets ranged from 9.49 - 9.51mm and thickness of the tablets ranged from 4.90-5.2mm. The total weight of each formulation was not maintained uniformly however the weight variation of the tablets within the limits of 5%. The measured hardness of tablets in all batches was ranged from 4.32-5.0mm. Friability values were found to be less than 1% in all prepared formulations and considered to be satisfactory.

CONCLUSION: The approach of the present study was to make a comparative evaluation among these polymers and to assess the effect of physicochemical nature of the active ingredients on the drug release profile. The literature review shows that, the release of water-soluble drugs was higher than the drugs with lower solubility and the mechanism of release was changed with the nature and content of polymer in the matrix. The type of polymer used imparts a conspicuous effect on release mechanism. The angle of repose, compressibility index and sieve analysis results shown that the formulation is suitable for wet granulation. This study have been showed that Lamotrigine could be used in sustained release drug delivery system by formulating it has sustained drug delivery system, provides extend duration of action in therapeutic range without reaching toxic levels as in the case of conventional dosage forms. These dosage forms have the ability to reduce the dosing frequency. The technique employed in the preparation of matrix system i.e. wet granulation, is highly practical and economical from the industry point of view. By the results we can confirm that order of drug release follows first order and the mechanism of drug release from sustained release matrix tablets is by Non-Fickian diffusion. Success of the In vitro drug release studies recommends the product for further In vivo studies, it may improve patient compliance.