Rimonabant is an anti-obesity drug which acts as Cannabinoid-1 receptor antagonist. Its main avenue of effect is reduction in appetite. The drug was formulated in the form of Sodium Alginate – Guar gum microspheres following ionotropic gelation method to reduce its dose related side effects. A detailed study of physical and chemical parameters including percentage drug loading and cumulative drug release was carried out and statistically evaluated. Each and every test on all batches was carried out in triplicate. After the experiment the microspheres showed good flow properties with drug entrapment efficiency recorded highest at 71.6%, drug loading results ranged from 12.91-18.20% and the yield percentage was recorded over 90% for all the formulations. The rate of drug release followed Higuchi matrix model equation.

INTRODUCTION: Rimonabant is chemically 5- (4- chlorophenyl) - 1- (2, 4- dichlorophenyl) 4 methyl- N- (piperidin- 1- yl) - 1H- pyrazole- 3 carboxamide. It acts by blocking the CB1 receptor 1, 2, 3 , one of the two receptors found in the newly described physiological system called endocannabinoid system (EC),  believed to play a critical role in regulation of food intake and energy expenditure. The drug has a severe side effect of mental depression leading to suicidal tendency. The drug was formulated in the form of microsphere to slower its release rate and minimize dose related side effects. Detailed physiochemical study of microsphere was carried out and statistically evaluated.

Materials: Rimonabant was obtained as a gift sample from Hetero Labs Ltd., Hyderabad. Sodium Alginate 24 (Viscosity of 2% aqueous solution at 25oC was 3500 cps) was obtained from Loba Chemie, Mumbai, Calcium Chloride Dihydrate (A.R. Grade, E Merck, Germany). Guar gum 25 (Merck Specialized Private Limited, Mumbai) and all other chemicals were purchased in A.R and L.R. grade as required. The experimental work was carried out at the laboratory of Calcutta Institute of Pharmaceutical Technology & AHS, Banitabla, Uluberia in 2010 and some instrumental analysis was also carried out in Bose Institute, Central Drug Laboratory, Kolkata.

Preparation of Microspheres: Rimonabant, Guar gum and Sodium alginate were weighed accordingly and the concentrations of Guar gum and Sodium Alginate were varied (Table 1). The two polymers Guar gum and Sodium alginate are water soluble in nature 7,  8. 50 ml DM water and Sodium alginate were stirred in a mechanical stirrer (Remi, Mumbai) at a speed of 300 rpm to form a uniform solution. The drug was added to the solution and stirred for 30 minutes at the same speed of 300 rpm. Guar gum was then added to this solution and stirred for 1 hour at a speed of 400 rpm. Calcium Chloride (6% w/v) was added to DM water to form a 100 ml solution in a magnetic stirrer. Now the drug polymer solution was drop wise injected in the calcium chloride solution by a needle (21G) while being stirred in a mechanical stirrer at a speed varying from 300-400 rpm. Thus microspheres were formed. The microspheres were decanted from the solution within 5 minutes of formation and then air dried for 4 hours. The air dried microspheres were then put in the incubator at 30oC-40oC for 2 to 3 days. The #22 I.P standard sieve size fractions were used for further studies.

Process Variables and Process Optimization: In the preparation of microsphere, the percentage of Sodium Alginate and Guar gum was varied leading to different drug loading capacity 4. The stirring time, stirring speed were varied in each formulation and different batches thus produced  were analyzed for size, shape, ease of preparation, drug content and drug release (Table 2).

Evaluation of Preparation Method: In this project attempts have been made to prepare the guar gum-alginate microspheres bearing Rimonabant by ionotropic gelation technique5. Here, microspheres were formulated with guar gum which increased the entrapment efficiency, Sodium alginate maintain good percentage of yield value. The Guar gum concentration increased swell ability of formulation. The drug-polymer ratio of the formulation is described by the table 1 28.

Drug-Polymer Interaction (FTIR): Pure drug, guar-gum, sodium alginate and drug loaded microspheres were analyzed. KBr (I P grade) discs in a proportion of 1:100 samples: KBr were prepared from sample and analyzed in FTIR spectrophotometer (SHIMADZU FTIR- 8400S, Japan) over a range of 400- 4000 cm-1. Transmittance spectra were recorded and displayed (fig. 4). 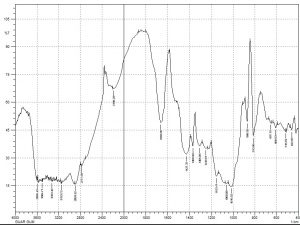 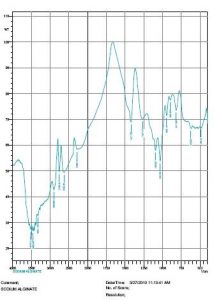 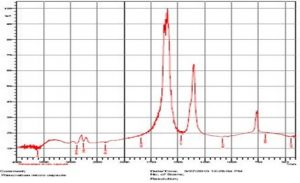 Differential Scanning Colorimetric Study: DSC thermogram of the pure drug and the microsphere were recorded with a differential scanning colorimeter (DSC131 evo, Setaram Instrumentation (Caluire, France) from 20oC-550oC at a heating rate of 20oC per minute. (Figure 5, Figure 6, Figure 7, Figure 8 and figure 9).

Dissolution Test: Drug release was performed using USP dissolution rate test apparatus paddle type (50 rpm, 37±0.5oC), at pH 7.4 of phosphate buffer solution for 10 hours. At predetermined time intervals 2ml samples were withdrawn and replaced by an equal volume of fresh medium. After that the samples were filtered, diluted, and assayed at each interval for rimonabant content released at λmax 230nm using double beam UV-spectrophotometer (Shimadzu – 1700, Japan). Three trials were carried out for all formulations 29. From this, percentage drug release was calculated and plotted against time.

Where R and UR are the released and unreleased percentages respective.ely, at time [t]; k0, k1, kh, kkp are the rate constants of zero order, first order, Higuchi matrix and Korsmeyer-Peppas respectively 27 (Table 4, Fig. 10, Fig. 11, Fig. 12 and Fig. 13). Time versus cumulative percentage of drug release data is shown in table 5. The rate of drug release followed Higuchi matrix model equation, where the mean r2 value is greater than the mean r2 value of zero order, first order or Korsmeyer-peppas models. According to the value of n (table 4) it can be stated that F4, the best optimized batch follows non-fickian super case II.

if value of n is less than 0.5, it implies Quasi-Fickian diffusion;

if value of n is equal to 0.5, it implies Fickian diffusion (first order release);

if value of n is more than 0.5 but less than 1.0, it implies anomalous (non-Fickian) diffusion;

if value of n is equal to 1.0, it implies non-Fickian case II (and zero order release rate);

if value of n is more than 1.0, it implies non-Fickian super case II

Swelling Study (Degree of Swelling): Microspheres (100mg) were placed in little excess of distilled water, 0.1N HCL and PBS (pH 7.4) and allowed to swell to constant weight. The microspheres were removed, blotted with filter paper and their changes in weight were measured at an interval period of 30 minutes and recorded. The degree of swelling [a] was then calculated from the formula 6:

Degree of the swelling in percentage was calculated using the formula:

Where, WO is the initial weight of the beads at equilibrium swelling in the medium. Guar gum-alginate microspheres swell 6 in water, 0.1(N) HCL and phosphate buffer 7.4. As a result of decrease in the concentration of guar gum the swell ability study is decreased. Cross-linking with free access of water to the guar gum hydroxyl group, reduces the swelling properties of the cross linked polymer. The swelling percentage of all the batches in distilled water, 0.1 (N) HCL and phosphate buffer 7.4 depending on the variation of guar gum concentration are shown in Fig. 14, Fig. 15, and Fig. 16. 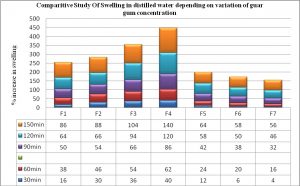 FIG. 14:  COMPARATIVE STUDY OF SWELLING % OF ALL BATCHES DEPENDING ON VARIATION OF GUAR GUM CONC. IN DISTILLED WATER 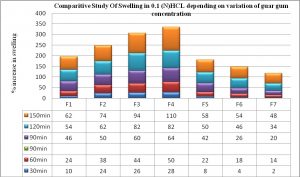 FIG. 15:  COMPARATIVE STUDY OF SWELLING % OF ALL BATCHES DEPENDING ON VARIATION OF GUAR GUM CONC. IN 0.1 (N) HCl 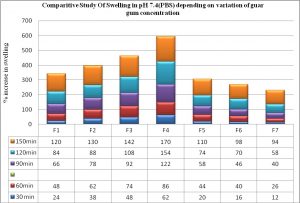 FIG. 16:  COMPARATIVE STUDY OF SWELLING % OF ALL BATCHES DEPENDING ON VARIATION OF GUAR GUM CONC. IN PH 7.4 (PBS)

Scanning Electron Microscopy: Morphological characterization of the microspheres was done by taking scanning electron microscope in FEI Quanta-200 MK2, Netherlands. Cross sectional view were obtained by cutting the microspheres with a razor blade. The samples were coated to 200 A o thickness with gold palladium using Pelco model 3 sputter coater prior to microscopy. A working distance of 20nm, a tilt of 0o and accelerating voltage of 15 kv were the operating parameters. Microspheres before and after dissolution were subjected to SEM study. Photographs were taken within a range of 50 – 500 magnifications (Fig. 17, Fig. 18 and Fig. 19). 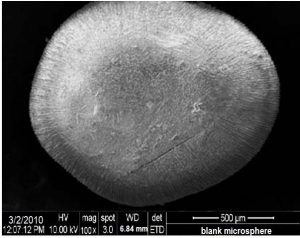 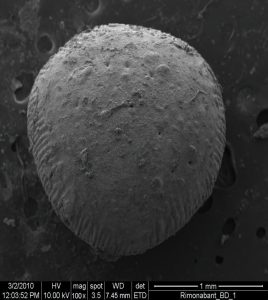 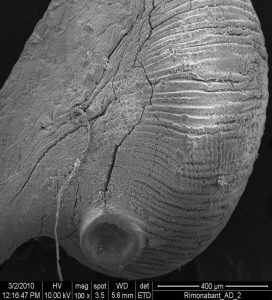 Micromeritic Study: To determine the rheological effects of the microspheres, the angle of repose of all the samples were measured using funnel method. Bulk density 31, 32 was determined by taking known quantity of microspheres in 100ml measuring cylinder and tapping it 3 times from a height of 1 inch at 2 seconds interval. The bulk density was calculated by dividing sample weight by final bulk volume 4 (Table 6).

Surface Accumulation Study (SA): This study 9 was conducted to estimate the amount of drug present on the surface of the microspheres which may show immediate release in the dissolution media. 100mg of microspheres (#22 sizes) were suspended in 100ml of phosphate buffer (pH 7.4), simulating the dissolution media. The samples were shaken vigorously for 15 minutes in a mechanical shaker. The amount of drug leached out from the surface was analyzed by UV spectrophotometer Shimadzu- 1700, Japan at 230nm. Percentage of drug released with respect to entrapped drug in the sample was recorded (Table 6).

CONCLUSION: In the present study, in-vitro characterization of Guar gum- Sodium alginate based Rimonabant microspheres were prepared for gastrointestinal drug delivery, where Guar gum acts as a natural polymer 15 based carrier which is inexpensive and naturally occurring and also having hydrophilic and swelling properties. These properties and the viscous nature of the Guar gum retards release of the drug from the dosage form, making it more likely that degradation will occur in the gastrointestinal tract. Sodium alginate helps in uniform release of the drug over a longer duration of time and also acts as a biodegradable carrier. The natural polymers are also appealing for use in drug delivery for a wide range of molecular weights, varying chemical compositions, low toxicity and biodegradability. Moreover, they are selectively degraded in the gastrointestinal tract.

Therefore, more research is necessary to be focused on the specificity of drug uptake in the gastrointestinal site. Sodium Alginate in the formulations degrades 16 slowly resulting in sustained release of drug from the microspheres. Rimonabant can be successfully formulated in microsphere form by optimizing the proportion of Guar gum and Sodium alginate as polymers and can be encapsulated for therapeutic purpose to reduce dose related side effects.

ACKNOWLEDGEMENTS: Authors wish to give thanks to Calcutta Institute of Pharmaceutical technology and A.H.S authority for constant support to carry out this project work. We also thank Shri Subrata Roy of CDL, Kolkata for his constant support to the project along with Mr. Shubash Chandra Mikop of Bose Institute for SEM study. We also acknowledge Hetero Labs Ltd. for providing basic drug Rimonabant to carry out the project and all technical assistants, especially Shri Somnath Nandy for his continuous help.