Tadalafil (TD), a PDE-5 inhibitor, belongs to BCS class II. It is poorly soluble in water and requires enhancement in solubility and dissolution rate for increasing its oral bioavailability. In the present investigation, solid dispersed systems of tadalafil with poloxamer188 and sodium starch glycolate were prepared using solvent evaporation technique. The dissolution rate of the drug and poloxamer188 based solid dispersion was significantly higher than the sodium starch glycolate (SSG) based preparations and pure drug which reaches closer to the dissolution profile of marketed product. This was due to an increase in surface area of drug available for dissolution. Characterization of binary systems with FTIR studies demonstrated the presence of strong hydrogen bonding interactions, a significant decrease in crystallinity and the possibility of existence of amorphous entities of the drug. In the binary systems tested, 1:0.5 proportion of Tadalafil/poloxamer188 showed rapid dissolution of tadalafil (DE30 56.68 %). In the binary systems, tested (1:0.5) proportion of tadalafil/poloxamer188 showed rapid dissolution of tadalafil. In contrast, higher proportion of polaxmer188 (1:1) offered no advantage towards dissolution enhancement of the drug, indicating altered rheological characters of the polymer at its higher concentration, which might have retard the release rate of tadalafil. The tablets were prepared for the optimized formula of solid dispersion, by wet granulation technique. The solid dispersion tablets were evaluated and compared with tadalafil marketed product.

INTRODUCTION: Solid dispersion techniques can be used to increase dissolution and absorption of several insoluble drugs 1-2.

To date, a number of drugs are not showing complete therapeutic effect because of their poor solubility and dissolution, which in turn leads to poor bioavailability of the drug 3-4. So, in the modern days, top most importance is given for increasing the dissolution rate of poorly soluble drugs, which enhances their bioavailability.

The rate and extent of absorption of class II compounds is highly dependent on the performance of the formulated product. These drugs can be successfully formulated for oral administration, with formulation design to ensure consistent bioavailability 5. Solid dispersions are one of the most promising strategies to improve the solubility and dissolution rate of poorly water-soluble drugs 6. By reducing the drug particle size to the absolute minimum, and hence, thereby improving drug wettability, bioavailability may can be significantly improved. They are usually presented as amorphous products.

Recently, surfactants have been included to stabilize the formulations; thus avoiding this avoids drug recrystallization, thereby and potentiating their solubility 7, 8. The term "'solid dispersion'" has been utilized to describe a family of dosage forms, whereby the drug is dispersed in a biological inert matrix, usually with a view in order to enhancing the oral bioavailability. More specifically, Chiou and Regelman (1971), defined these systems as "the dispersion of one or more active ingredient in an inert matrix at solid-state prepared by the melting (Fusion), solvent or melting solvent method" 9, 10.

A number of poorly soluble drugs have been shown to improve their dissolution characteristics, when converted to solid dispersions. Tadalafil (TD) is widely used in the treatment of erectile dysfunction. It is a PDE-5 inhibitor. The inhibition of PDE5 by TD enhances erectile function by increasing the amount of CGMP. TD is a white or almost white powder and it is poorly soluble in water. Since the dissolution rate of the drug from surface is affected by the carrier has an ultimate influence on the dissolution of the dispersed drug. Hence hydrophilic carriers like SSG and polaxmer188 were used as carriers for converting TD into solid dispersions in this study.

Preparation of Solid Dispersions of Tadalafil: Solid dispersions were prepared by solvent evaporation technique. Accurately 200 mg of Tadalafil (for 10 doses i.e 20 mg/dose)was weighed and dissolved in 50 ml of methanol. Accurately carrier corresponding to different drug: carrier ratio (as shown in Table 1) by weight was weighed and dispersed in the drug solution. The solvent was allowed to evaporate on water bath under occasional stirring at temperature of 40-50oC in a protected environmental condition containing an exhaust system. The dried mass was pulverized and was passed through a #100-mesh sieve. The powder was subsequently dried at 40oC for 3 hours in a hot air oven. The powders were stored in desiccators for further studies.

The dissolution experiments were conducted in triplicate and results are shown in the figs. 1-4 and dissolution parameters are given in Tables 3, 4 11, 12, 13. 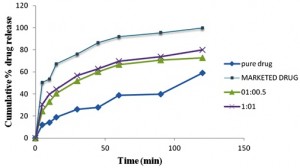 FIG. 1: DISSOLUTION PROFILE OF TADALAFIL AND THEIR SD’S WITH SSG (ZERO ORDER) 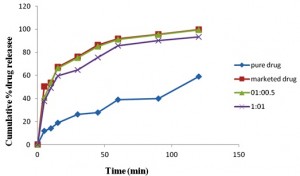 FIG. 2: DISSOLUTION PROFILE OF TADALAFIL AND THEIR SD’S WITH POLOXAMER188 (ZERO ORDER)

FIG. 3: FIRST ORDER DISSOLUTION PROFILE OF TADALAFIL AND THEIR SD’S WITH SSG 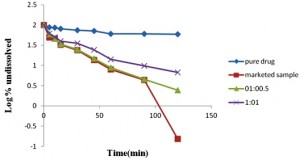 FIG. 4: FIRST ORDER DISSOLUTION PROFILE OF TADALAFIL AND THEIR SD’S WITH POLOXAMER188

Formulation of Tadalafil Tablets: Tablets each containing 30mg of TD were formulated employing TD co-evaporate of polaxmer188 (1:0.5) along with the usual tablet excipients.

Tadalafil dispersions were taken in mortar and pestle along with suitable diluents and mixed constantly until a dry is mix obtained (before mixing both the diluents and dispersions were allowed to pass through # 22 mesh). The binder was dissolved in hot purified water and stirred constantly until the complete PVP K-30 goes into solution (PVP 3% i.e 3 gms of PVP is dissolved in 100 ml water). Binder solution was added to above dry mix and mixed slowly.

Extra water was added till required consistency of mass is obtained and sifted through #22 mesh to obtain granules. Granules were dried in hot air oven and sifted through #24 to obtain uniform sized granules. The sifted granules were taken in blending cover and blended with Talc and disintegrant for 10 min. Magnesium stearate was sifted and added to above blend and lubricated for 5 mins. The blend was compressed into tablet using punches and suitable dies with a tablet weight of 250 mg.

Evaluation of Tadalafil Tablets: Compressed tablets were then evaluated for hardness, thickness, weight variation, disintegration, content uniformity, friability and drug content as shown in Table 6. Hardness was measured by Monsanto type hardness tester. One tablet was placed in each tube of disintegration apparatus and the test was carried out using 0.1NHCl as disintegrating media at 37oC.

Friability was determined in Roche friabilator by taking ten tablets. For drug content analysis, twenty tablets were accurately weighed and finely powdered. The quantity of powder, equivalent to 20mg of tadalafil was taken in a 100mL volumetric flask. 40 ml of methanol was added and sonicated for 20 min to dissolve the drug. The volume was made to 100 ml with 0.1 N HCl buffer. The dispersion was filtered using Whatmann filter paper. A 10 ml aliquot of the above solution was taken and diluted to 100 ml with 0.1 N HCl and assayed for drug content at 218 nm, using UV/Vis Spectro-photometer.

In vitro Dissolution study of Tablets: In vitro dissolution study of tablets was conducted using USP dissolution apparatus II (ElectroLab) at 50 rpm, using 0.1NHCl maintained at 37±0.5oC. Samples were withdrawn at various intervals, filtered through 0.45µm membrane filtered, diluted and assayed at 218nm, using UV/Vis spectrophotometer. The results are shown in the figs. 5, 6 and dissolution parameters are given in Tables 7, 8. 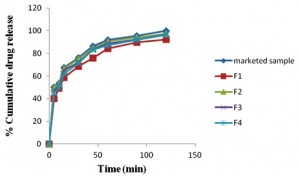 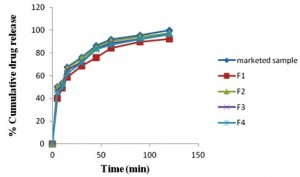 FIG. 6: FIRST ORDER DISSOLUTION PROFILE OF TADALAFIL AND THEIR SD TABLETS KINETICS OF THE FORMULATIONS WITH RESPECT TO PURE AND MARKETED PRODUCT

The IR spectrum of 1:0.5 solid dispersion (Fig. 7c) shows the presence of all tadalafil peaks with decreased intensity. However, no additional peak was observed in binary system, indicating absence of any chemical interaction between tadalafil and polymer.

From the evaluated parameters of the formulated tablets, it is clear that all the tablets fulfilled the official requirements of compressed tablets. 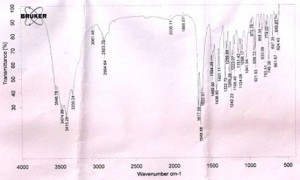 FIGURE 7A: FTIR SPECTRUM OF TADALAFIL 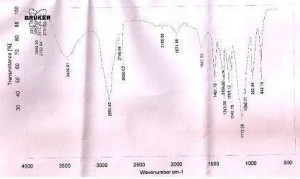 FIGURE 7B: FTIR SPECTRUM OF POLOXAMER188 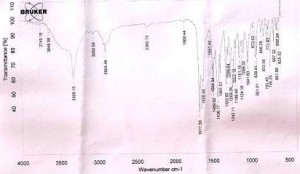 Suitability of various tablet excipients as carriers for solid dispersions of drugs was studied. Solid dispersions were prepared by solvent evaporation technique using methanol as a solvent. The dissolution profile of prepared dispersion was compared with pure drug and marketed product.

The rank order of dissolution rate improvement on various carriers studied were; Polaxamer 188 > Sodium starch glycolate. Solid dispersion using drug: poloxamer188 (1:0.5) as a carrier was found to be best, which was formulated into tablets. The dissolution studies were carried for the prepared formulations and marketed product. F2 formulation showed drug release similar to marketed product. The optimized formulation showed first order release.

ACKNOWLEDGEMENTS: Authors are thankful to Sri Indu Institute of pharmacy for providing necessary facilities to carry out the work.Thus, it can be concluded that the solubility of poorly water soluble drug Tadalafil can be enhanced by formulating as a solid dispersion with optimum concentration of a non ionic surfactant polaxamer 188 and optimized formula was tableted for administration.