ABSTRACT: The purpose of this study is to prepare a bilayer gastro retentive tablet of Propranolol HCl using direct compression technology and optimize the type and concentration of polymer to give maximum retentive effect with good drug release profile. Propranolol hydrochloride, a nonselective β-adrenergic blocker having short half-life (3-4 hr)and first pass metabolism favors for sustained release dosage form. In this study, a bilayer tablet was prepared which contains an immediate release portion and a floating layer. Gaur gum, Pectin were used as gel forming agents either alone or in combination, Sodium bicarbonate and citric acid as gas generating agent, superdisintegrant sodium starch glycolate for the fast release layer. The formulations gave an initial burst effect to provide the loading dose of the drug followed by sustained release for 14 h from the sustaining layer of tablets. The bilayer tablets were characterized by lag time, floating time, weight variation, drug content and dissolution profile. Best Formulation BFT1 [Gaur gum-Pectin (2:1)] shows lag time of 8.0min, floating time of 14 h and drug release of 98.97±0.81%.  The optimized formulation was subjected to stability studies at 40oCand 75% RH for period of two months. Short term stability studies showed good result.

INTRODUCTION:The real challenge in the development of an oral controlled-release drug delivery system is not just to sustain the drug release but also to prolong the presence of the dosage form within the gastrointestinal tract (GIT) until all the drug is completely released at the desired period of time. Indeed, gastric drug retention has received significant interest in the past few decades 1.

Drugs those are having a narrow absorption window and having more solubility in gastric region are suitable candidates for GRDDS. GRDDS prolongs the retention time of dosage forms in the stomach or upper gastrointestinal tract, as to improve solubility, bioavailability and the therapeutic efficacy of the drugs. Several techniques have been proposed to increases the gastric residence time of dosage forms such as buoyancy or floating system, hydrodynamically balanced system, expanding or swelling system, bio/mucoadhesive system, sedimentation or high density system, geometry or modified shape system may also use to increase gastric residence time.

Propranolol hydrochloride, a nonselective β-adrenergic blocker used widely in the treatment of hypertension, angina pectoris, pheochromocytoma and cardiac arrhythmias. It is almost absorbed from gastrointestinal tract but subjected to hepatic tissue binding and first pass metabolism. Conventional form available is administered orally, in doses of 40 mg to 80 mg twice a day. But due to raising problems with the conventional tablet resulting in fluctuations of drug plasma levels and also the drug has short biological half-life (3-4 hr)and first pass metabolism favors for sustained release dosage form. In recent years slow and sustained release formulation of propranolol hydrochloride has become available with claims that these formulations maintain beta adrenoreceptor blockade throughout a 24 hr period and enable the drug to be given once daily.

In the present study, we aimed to design and fabricate a quick/slow delivery dosage form as a bilayer floating tablet of Propranolol hydrochloride consisting of two layers i.e. fast releasing layer and sustain release layer (floating layer). This type of system is used primarily when maximum relief needs to be achieved quickly, and it is followed by a sustained release floating phase to avoid repeated administration.

Bilayer floating tablets were formulated to get initial burst effect of propranolol hydrochloride to provide the loading dose followed by sustained release for 16 hr as an alternative to conventional dosage form. Proper combination of the quick and sustained release floating phases using natural polymers would allow the optimization of the fast and slow-dose fractions as a function of the drug pharmacokinetics and metabolism.

All the chemicals and reagents required for the present work are of analytical grade.

The resulting mixture or blend was passed through sieve (40 #). Accurately weighed 120 mg of powder blend fed manually into each die of 8 station tablet machine and compressed by using 11 mm flat faced punch by direct compression method. Compression force was kept constant for all formulations. Prior to the compression, the blends of all batches were evaluated for angle of repose, loose bulk density, tapped bulk density, compressibililty index and Hausner’s ratio 4.

Formulation of Floating Sustained Release Tablets: Accurate quantity of drug and polymers were weighed according to the formula shown in table 2 and mixed well. The mass was prepared using 5% w/v solution of PVP K30 in isopropyl alcohol as granulating fluid. Then the mass was passed through 16 # sieve and granules were allowed to dry in oven at 40ºC for 30 minutes. Dried granules were passed through 12 # sieve. Then 10% fines were added in the granules and mixed with magnesium stearate and talc for 5 min and processed for compression by using 11 mm round flat faced punches of tablet punching machine. Compression force was kept constant for all formulations. Prior to the compression, the granules of all batches were evaluated for angle of repose, bulk density, tapped density, compressibility index and Hausner’s ratio 5, 6.

Loose bulk density:It is indicative of the packing of particles and as such is greatly influenced by the size of granules. Loose bulk density of tablets was determined by pouring gently 2g of the powder blend from each formula through a glass funnel into 10 ml measuring cylinder. The volumes occupied by the samples were noted. Loose bulk density was expressed in (g/ml) and calculated by using following formula:

Tapped bulk density:It was determined by pouring gently 2 g of the powder blend from each formula through a glass funnel into 10 ml measuring cylinder. The cylinder was tapped gently on to a hard surface from the height of 2 inches at second interval until a constant volume was obtained. Volume occupied by the sample after tapping was noted. Tapped density was expressed in (g/ml)and calculated by using following formula:

Where, θ = angle of repose, h = height of powder cone, r = radius of the powder cone

Hardness: This test is used to check the hardness of a tablet which may undergo chipping or breakage during storage, transportation and handling. In this five tablets were selected at random and the hardness of each tablet formulation and marketed tablet was measured with Monsanto hardness tester. The hardness is usually measured in terms of kg/cm2.

Friability: The friability test was carried out to evaluate the hardness and stability instantly. The tablet friability was measured according to the Indian Pharmacopoeia. In this, 10 tablets were weighed initially and put in a rotating apparatus drum (Roche friabilator). Then, they are subjected to fall from 6 inches height. After completion of 100 rotations, loose dust particles were removed from the tablets after the test and the tablets were again weighed. The tablet friability was expressed in (%).

The percentage friability of the tablet formulation was calculated by using following formula is given below:

Floating time: The tablet was placed in 250ml beaker and the total time duration of the tablet to float on the 200ml of 0.1 N HCl was noted.

Kinetics of In-vitro Drug Release: To study the release kinetics of In-vitro drug release of propranolol HCl, data was applied to kinetic models such as zero order, first order, Higuchi, Hixon–crowell and Korsemeyer-Peppas. The drug release data was evaluated by model - dependent (curve fitting) using PCP Disso v3 software and model with the higher correlation coefficient was considered to be best model. In  order  to  know  the  drug release  mechanism  the  data  was  further  analyzed  by Korsmeyer Peppas equation and the value of ‘n’ i.e. release exponent was calculated. The n value is used to interpret the release mechanism14.

Where, K0 is the zero order rate constant (concentration/time) and t is the time (hrs).

Where, C0 is the initial concentration of drug, t is the time (hrs) and Krepresents first   order rate constant.

Where, Qt is the amount of released drug in time ‘t’ and K is kinetic constant.

Where, Mt is the amount of released drug at time ‘t’, M∞ is the overall amount of the drug (whole dose) released after 12 hrs, K represents diffusional characteristic of drug/ polymer system constant and n is the diffusional or release exponent that characterizes the mechanism of release of drug.

Accelerated Stability Study: In the present study, accelerated stability studies were carried out at 40oC and 75±5% relative humidity for a specific time period of 2 months for Optimized formulation BFT1.

For the accelerated stability study, the tablets were sealed in aluminiun packaging coated inside with polyethylene. These sample containers were placed in desiccators maintained at 400C temperature and 75±5% relative humidity.

The samples were withdrawn at the end of 15, 30, 45 and 60 days interval and evaluated for physical parameters, drug content and in vitro drug release 15.

The FT-IR spectrum of drug and polymers revealed that, the major frequencies of functional groups of pure drug remain intact in the mixture containing different polymers. Hence, there is no interaction between the drug and polymers used in the study. 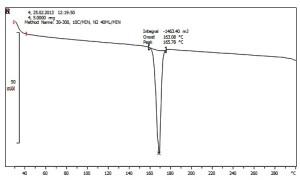 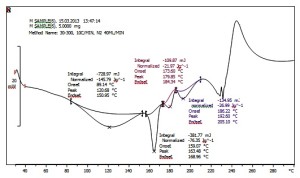 These thermograms indicated that no significant change in peak shape, area and no shift of peak were found. Therefore, this study revealed that there were no interaction between the drug and polymer or little interaction because pectin and guar gum are hydrocolloids and they do not melt and not give the sharp peak.

All the batches pass the pharmacopoeial limits.

Similarly it shows effect of concentration of pectin in batches F2 and F4 on % drug release i.e. 93.77% and 92.63% within 7 and 8 hrs respectively. Fig. 7 shows the release profile of floating sustained release tablets containing propranolol HCl and the polymers guar gum and pectin in different concentration ratios. Initially, the tablets containing low concentration of guar gum and pectin (1:1 ratio) in batch F5 shows the drug release in quite a short time i.e. in 10 hrs. 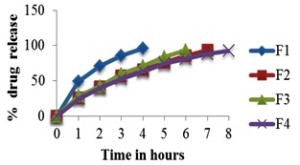 FIG. 6: COMPARISON OF THE RELEASE PROFILES OF FLOATING SUSTAINED RELEASE TABLETS OF BATCHES F1 TO F4

On the other hand, the tablets containing higher of concentration of guar gum and pectin (2:1 and 3:1 ratio) were able to sustain the release of drug over a longer period of time i.e. 12 hrs and more than 12 hrs. 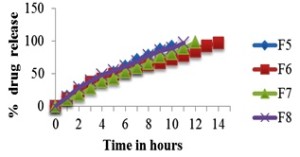 FIG. 7: COMPARISON OF THE RELEASE PROFILES OF FLOATING SUSTAINED RELEASE TABLETS OF BATCHES F5 TO F8

FIG. 8: COMPARISON OF THE RELEASE PROFILES OF FLOATING SUSTAINED RELEASE TABLETS OF BATCHES F1 TO F8 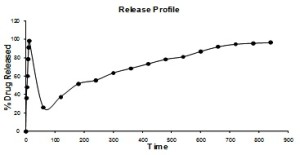 The floating sustained release layer of Bilayer floating tablet shows that, the polymers guar gum and pectin (2:1 ratio) can release the drug in sustained manner for upto 14 hrs for batch F6.

All the parameters were found to be within the pharmacopoeial limits.

Drug release kinetic profile of Floating Sustained Release Tablets: The curve fitting results of the release rate profiles for the designed formulations were subjected for data analysis using PCP Disso v3 software. It was found that the optimized formulation F6 was fitted into Korsemeyer-Peppas model which is the best fitted model. From the Korsemeyer-Peppas equation, diffusion coefficient (n) was calculated. The results indicated that the propranolol hydrochloride formulation presented dissolution behavior followed by anomalous transport.

Accelerated Stability Study of optimized formulation: (40°C/75%RH): After storage, the formulation was analyzed for various physical parameters. Results are shown in Table 15.

When the stability studies of optimized batch BFT1 were done, no major difference was found between evaluated parameters before and after storage and all parameters are in acceptable limits.

CONCLUSION: The research was undertaken with the aim to formulate and evaluate the bilayer floating tablets of Propranolol HCl using Gaur gum and Pectin as polymers.

From results obtained, it was concluded that the formulation of bilayer floating tablet of Propranolol HCl containing Gaur gum and Pectin as polymer was taken as ideal or optimized formulation for 14 hrs release as it fulfils all the requirement of sustained release dosage form.

ACKNOWLEDGEMENT: The authors are thankful to the Principal, J.L. Chaturvedi College of Pharmacy, Nagpur for providing necessary facilities for research work. They are also grateful to Cipla Ltd. Mumbai for giving gift samples of pure drug.