ABSTRACT: Onion, garlic and fenugreek are widely cultivated in Egypt and many reports confirmed their antidiabetic activities as used separately. Current study focused on these three herbs when present together in a mixture. All dried herbs were finely powdered to obtain homogenous mixtures. Pre-formulation studies were conducted on each individual herb including determination of foreign matter, loss on drying, acid insoluble ash and water contents. Analysis of active components responsible for the antidiabetic activity was also carried out using GLC and HPLC techniques. Pharmaceutical capsules were prepared by blending garlic, onion, and fenugreek seed powders in a ratio 1:1:2 respectively. The blend was granulated using 2% alcoholic solution of PVP k-30. The Disintegration testing of hard gelatin capsules was performed according to the USP, the capsules were disintegrated completely within 15 minutes in both distilled water and acetate buffer (0.05 M). In vitro release studies showed variable dependence of the active components on the pH of the release media.  Pharmacological studies conducted on hyperglycemic rats indicated that both onion- and fenugreek-receiving groups showed significant reduction in blood glucose levels (BGL) starting from the 5th day, while garlic-receiving group showed this significant  reduction starting from the 3rd day of the experiment. Starting from the 4th day, groups that received the herbal combination showed reduction in blood glucose levels which were significant when compared to the control group and insignificant when compared to glimepiride-receiving (the standard) group.

INTRODUCTION:Diabetes mellitus (DM) is one of the major metabolic disorders, afflicting a large proportion of the population all over the world. The persistent hyperglycemia, associated with diabetes, is responsible for the appearance of various organ and tissue damage in diabetic subjects.

Current therapy for the treatment of hyperglycemia of type 2 DM includes sulphonylureas, a biguanide, alpha-glucosidase inhibitors, meglitinides, and thiazolidinediones.

Although they are effective in lowering blood glucose level, some of them have dangerous side effects 2.

Herbal medicine used up to 50% of the western population. The medical applications of these herbs are both for treatment as well as for prevention of many common disorders ranging from digestive disorders to depression 3. In the last few years, there has been an exponential growth in the field of herbal medicine in diabetes mellitus. These drugs are gaining popularity because of their natural origin and less side effects. Recent scientific investigations have confirmed the efficacy of many of these herbs in the management of DM 4. Also, the use of lower doses of more than one herb may allow much better safety.

Onion, garlic and fenugreek are widely cultivated in Egypt and they are known to exhibit antidiabetic activities. Allium sativum (garlic) is known to possess a vast variety of biological functions. It has antimicrobial, antithrombotic, anticancer and antioxidant effects. It could improve the immune system as well as had a capacity to lower blood pressure, serum lipid and blood glucose levels 5. The constituents of garlic are divided into two main groups: sulfur-containing compounds and non-sulfur-containing compounds. Most of the medicinal effects of garlic are referable to a sulfur compound known as Allicin, a powerful anti-biotic, anti-fungal and antidiabetic agent 6, 7. The hypoglycemic activity of allicin is thought to be due to increased hepatic metabolism, increased insulin released from pancreatic b-cells and/or insulin sparing effect 8.

Wide-ranging claims have been made for the effectiveness of onions (allium cepa F: lilaceae) against conditions ranging from the common cold to heart disease and diabetes 9. Onion contains alliin and similar sulfur compounds, of which, methyl cysteine sulfoxide (MSC), also found in garlic, is known to have antidiabetic and antihyperlipidemic effects 10-12.

Concerning Fenugreek, many studies confirmed the anti-hyperglycaemic and anti-dyslipidemic properties of 4-hydroxyisoleucine (HIL), an unusual amino acid isolated from Trigonella foenum-graecum seeds 13,14. It may exert its hypoglycemic activity via stimulating insulin release by isolated islet cells in both rats and human 15. It may also delay glucose absorption and enhancing its utilization 16.

The aim of this work was to prepare these herbal mixture in the form of pharmaceutical capsules and to investigate the hypoglycemic activity of these three herbs when present together, in a certain ratio. Finally, evaluate and characterize the prepared capsules from the pharmaceutical point of view.

Hard gelatin capsules (size 00) were filled manually with 275 mg of the prepared granules and stored in dry closed bottles. Powder flowability was determined before and after granulation by measuring the angle of repose (θ). The angle was determined by using the method described by Nep and Conway 21. Powder (10 g) were weighed and allowed to flow through the funnel into the base. A pile was formed at the base and the angle of repose was then calculated as follows

Male Sprague-Dawley rats were used; their weights were 150±20 gm each. Animals were housed in wired cages in room temperature with a 12-h light/dark cycle. Food and water were provided ad libitum. Rats were rendered diabetic by IP injection of alloxane (Sigma, USA) in a dose 150 mg/kg. Three days later one blood drop was withdrawn from the retro-orbital plexus and tested for blood glucose level (BGL) using glucose strips and Freestyle Apparatus, USA. Rats with blood glucose level more than 140 mg/dl were considered diabetic. Diabetic animals were classified into 7 groups, 5 rats each:

Glimepiride, in a dose of 300 μg/kg once daily, was obtained under trade name AmarylÒ, produced by Aventis, as tablets that crushed before use. Test compounds were administered orally to rats as starch mucilage twice daily in a dose 800 mg/kg using stomach tube. Blood glucose levels were tested for 9 successive days and results were recorded.

RESULTS AND DISCUSSION: Results of analysis of herbal samples were displayed in table 2. Only fenugreek seeds and garlic powder were mentioned in the British Pharmacopeia 27, 28. While, United States Pharmacopeia mentioned fenugreek seeds and garlic 29, 30 (both powder and delayed release tablets). The Japanese pharmacopeia 31 did not mention any of the three drugs.  Other pharmacopeias, such as Indian pharmacopeia 32 listed some specifications for the dehydrated onion and garlic (including powder) that were adopted by the Bureau of Indian Standards.  Results listed in table 2 could be considered satisfactory for most of the specifications mentioned in these pharmacopeias, if any.

TABLE 2: THE DETERMINED VALUES OF ANALYSIS OF THE HERBAL DRUGS

Determination of drug contents is very important in calculating the percentage released and ensuring uniform pharmacological response among different batches of raw materials. GLC results showed that garlic contains about 0.53±0.07 % w/w Allicin. HPLC analysis showed that seeds of fenugreek contain 0.52 ± 0.16 % w/w of HIL, while, MSC contents in onion and garlic were 0.23 ± 0.13 % w/w. The values could be accepted with regard to the amount of these substances in such samples.

Powdered flowability: Results showed that granulation process resulted in better flowability. The angle of repose, θ, was decreased significantly (p < 0.05) from 40.2° to 32.3°. Binding properties of PVP k-30 and drying process may account for this reduction in the angle of repose. Results obtained by Onunkwo 33 were in agreement with this notification. Shotton 34 referred this to the reduction in the cohesive forces of the larger granules formed at higher binding level. Unsurprisingly, the use of water in granulation process could accelerate enzymatic reactions that may degrade the active components of the dried powder. This is why absolute alcohol was used in granulation.  It is worth to mention that the granules were accepted for large scale production of capsule filling by the Arabian company for capsules and gelatinous preparations (Alexandria, Egypt)

In-vitro disintegration: The prepared hard gelatin capsules were disintegrated completely within 15 minutes, in both distilled water and acetate buffer (0.05 M), allowing the release of granules into the disintegration medium.

For hard gelatin capsules, USP 24 stated that at the end of 30 min, all of the capsules disintegrate except for fragments from the capsule shell.

In-vitro release studies: Results of release studies, as shown in figure 1, showed that HIL is released in SIF faster than in SGF. It could be noticed that nearly 80 % was released in SIF during the first 15 minutes and almost all the substance was released after 30 minutes of the experiment. On the other hand, only 32% of HIL was released after 2 hours in SGF. Statistical treatment suggested that the difference between the two SDs is very significant (The P value is 0.0085). With regard to MSC, the release pattern in SGF was not statistically differing from that in SIF. 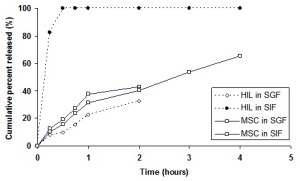 FIG. 1: RELEASE PROFILE OF HIL AND MSC IN DIFFERENT MEDIA AT 37oC

These results can be interpreted in the light of chemical properties of the two substances, figure 2. HIL is a derivative of the amino acid isoleucine. The latter is chemically neutral and relatively nonpolar molecule because the amino acid has both an amine and acid group which have been neutralized in the zwitterion.

FIG. 2: CHEMICAL STRUCTURE OF (A) HYDROXY-ISOLEUCINE (B) S-METHYL L-CYSTEINE SULFOXIDE

Introducing a hydroxyl group in position number four resulted in increasing the acidity and imparting a more polar character to the amino acid. According to Henderson–Hasselbalch equation 35, HIL would be more ionized and more soluble in alkaline medium. It may be different in case of MSC, Cysteine itself is a slightly polar molecule. The sulfoxide group (sulfinyl group attached to two carbon atoms) will have a little effect on the acidity and polarity of the amino acid.

Thus, the amino acid will be slightly affected by change in pH. The release pattern of allicin from garlic powder in different pH was previously studied 36 and there is no need for additional results.

In vivo Hypoglycemic activity studies: First, it is important to notify that the combination ratio (1:1:2) was carefully selected to achieve optimum therapeutic effects with minimal side effects that are suggested by the authors and confirmed by the preliminary pharmacologic data (not included in the text). Results in hyperglycemic animals were demonstrated in figure 3.

It was found that all the treated groups showed insignificant reduction in blood glucose levels at the first day of the experiment except glimepiride-receiving group. It produced a reduction in BGL which was, statistically, highly significant (P<0.001) when compared to the control group (group I). Starting from the second day, groups 5 and 6 which received the mixture as powder and granules, respectively showed reduction in blood glucose levels which is significant when comparing to the control group but also, still, significant as compared to glimepiride-receiving group.

Starting from the 4th day, groups 5 and 6 showed a significant reduction in BGL that was insignificant when compared to the standard-receiving group (group 7). This result suggested that the mixture do not produce a sharp reduction in BGL as do most of the sulfonylurea hypoglycemic agents.

It was observed also that no significant differences were shown between group 5 and group 6, during the whole period of the study indicating that granulation process did not affect the hypoglycemic activity of the mixture in the powder form. 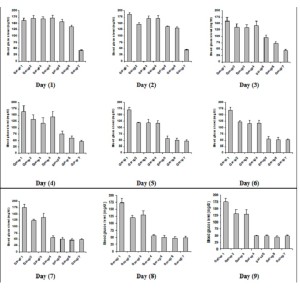 Toxicological studies: All the studied groups tolerated the dose and no signs of toxicity were produced. Results of acute toxicity studies demonstrated that the herbal mixture is highly safe. The LD50 values was determined and found 6 g/Kg.

CONCLUSIONS: Results obtained from the current study provide a promising therapy for diabetes mellitus. This herbal mixture has a more potent hypoglycemic activity than the individual components, much lower side effects, much higher safety and more cheap as compared to the synthetic agents.

ACKNOWLEDGMENTS: The authors thankfully acknowledge The Arabian for Preservingand Manufacturing Agricultural Crops (APMAC, Egypt) for providingall necessary facilities and their constantsupport throughout the study.