DESIGN AND IN VITRO EVALUATION OF PROCHLORPERAZINE MALEATE BUCCOADHESIVE TABLETS AND COMPARISON OF MONOLAYER, BILAYER AND COMPRESSED COATED TABLETS

DESIGN AND IN VITRO EVALUATION OF PROCHLORPERAZINE MALEATE BUCCOADHESIVE TABLETS AND COMPARISON OF MONOLAYER, BILAYER AND COMPRESSED COATED TABLETS

INTRODUCTION: Conventional dosage forms for delivery of drugs via the oral mucosa include solutions, erodible or chewable, buccal or sublingual tablets and capsules. Unfortunately, a major portion of the drug in these systems may be unavailable due to involuntary swallowing and a very short residence time, because of mastication, speech etc and hence sustained release is usually not within the scope of such formulations 1.

In general, rapid absorption from these routes is observed because of the thin mucus membrane and rich blood supply. After absorption, drug is transported through the deep lingual vein or facial vein which then drains into the general circulation via the jugular vein, bypassing the liver and thereby sparing the drug from first-pass metabolism 1, 2.

Drugs can be absorbed from the oral cavity through the oral mucosa either by sublingual or buccal route 1. Absorption of therapeutic agents from these routes overcomes premature drug degradation within the gastrointestinal tract as well as active drug loss due to first-pass hepatic metabolism that may be associated with oral route of administration3.

Mucosa as a site of drug absorption: 1, 4 The oral mucosa can be divided into two general regions, the outer vestibule and the oral cavity. The vestibule is bounded on the outside by the lips and cheeks and on the inside by the upper and lower dental arches. The oral cavity is situated within the dental arches framed on the top by the hard and soft palates and on the bottom by the tongue and floor of the mouth. The oral mucosa consists of an outermost layer of stratified squamous epithelium, below which lies a basement membrane, and below this, in turn, a lamina propria and submucosa.

The oral mucosa can be distinguished according to five major regions in the oral cavity 6:

Mechanism of buccal absorption: 6, 7 The mechanisms by which drugs cross biologic lipid membranes are passive diffusion, facilitated diffusion, active transport and pinocytosis. Among these, majority of drugs move across oral mucosa by passive mechanism which is governed by the laws of diffusion. 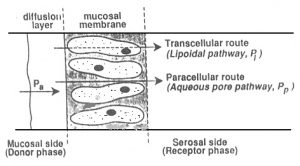 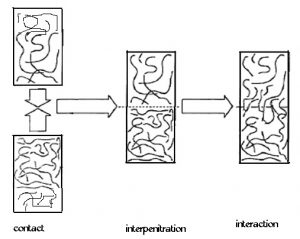 Mucoadhesive Polymers: 1, 5, 6, 10 Mucoadhesive polymers are water soluble and water insoluble polymers which are swellable networks jointed by cross linking agents. The polymers should possess optional polarity to make sure it is sufficiently wetted by the mucus and optimal fluidity that permits the mutual adsorption and interpenetration of polymer and mucus to take place. An ideal polymer for a mucoadhesive drug delivery system should have the following characteristics.

Buccoadhesive tablet may be monolithic or bilaminated system. The main disadvantages of the monolayer tablet is the multidirectional release of the drug, hence some of the fraction of drug may swallowed. In order to avoid multidirectional release of the drug a bilaminated system was used. The Bilayered tablet made up of two layers, drug containing core layer and backing layer. The backing layer may be of water insoluble material like Ethyl cellulose or hydrogenated castor oil or may be polymeric coating layer which functioning as a adhesive and backing layer. A Mucoadhesive delivery system with a backing layer on one side can be used for local as well as systemic transmucosal drug delivery. Such a backing layer avoids sticking of the tablet to the finger during application in the oral cavity.12

Determination of λmax: The absorption maxima of Prochlorperazine maleate was determined by running the             spectrum of drug solution in double beam ultraviolet spectrophotometer.

Procedure: Accurately weighed 25 mg of drug was dissolved in 500 ml of phosphate buffer in 500 ml amber colored volumetric flask with aid of sonication in bath sonicator for 20 min. This solution was labeled as stock-1. From the stock-120 ml of the solution were withdrawn and diluted up to 100 ml in 100 ml            amber colored volumetric flask. The spectrum of this solution was run in 200-400nm range in U.V. Spectrophotometer (SCHIMADHZU). The Prochlorperazine maleate shows the absorbance maxima at 255nm. in phosphate buffer pH 6.8.

Uniformity of weight: The bilayered tablet was checked to ensure the proper weight of tablets is being made. Twenty tablets were selected as a random from each batch, weigh individually and the average weight was calculated. The batch passes the test for uniformity of the weight if not more than two of the individual tablet weight deviated from the average weight by more than the 10%.

Thickness: Five tablets were selected at random from each batch and thickness of adhesive layer and bilayered tablet was measured by using digital vernier calipers.

Drug content: The solution was protected from light throughout the assay. Weigh and powder 20 tablets. Weigh accurately a quantity of powder equivalent to 25 mg of Prochlorperazine maleate and extract with three quantities of, each of 10 ml, of ethanol containing 1% v/v of strong ammonia solution. Filter the extract and to the combined extracts add sufficient ethanol to produce 100 ml. dilute 10 ml to 50 ml with ethanol and measured absorbance of the resulting solution at the maximum at about 258 nm. Calculate the contents of Prochlorperazine maleate taking 620 as the value of A (1%, 1cm) at the maximum at about 258nm.

Bioadhesive Strength: Bioadhesive strength of the tablet was measured on the modified physical balance. The design used for measuring the bioadhesive strength was shown in figure. The apparatus consist of a modified double beam physical balance in which the right pan has been replaced by a glass slide with copper wire and additional weight, to make the right side weight equal with left side pan. A taflone block of 3.8 cm diameter and 2 cm height was fabricated with an upward potrution of 2 cm height and 1.5 cm diameter on one side. This was kept in beaker filled with phosphate buffer pH 6.8, which was then placed below right side of the balance.

Preparation of drug free backing layer: Granular grad of Ethyl cellulose (Ethocel N10) was mixed with the lack of sunset yellow colour passed through the sieve no 100 and mixed well.

In vitro drug release study: In vitro drug release study of bilayer tablets were performed in automatic USP dissolution apparatus type 1 (basket). The dissolution tester USP (Elactrolab TDT-08L) was connected with Electro lab peristaltic pump, for automatic sample withdrawal and replacement of media, and Elactrolab fractional collector, for collection of sample. Phosphate buffer pH 6.8 was used as a dissolution media. The bowls of the dissolution tester was filled with 500ml of phosphate buffer pH 6.8 and allows to attaining a temperature of 37±0.5ºC. The reservoir for the replacement of the media was also filled with phosphate buffer. The collected samples were filtered through the 0.45 um mdi filter and absorbance of the solution was measured at 255 nm

The backing layer was then added on the primarily compressed adhesive layer and compressed at a hardness of 5 to 6 kp.

The results of adhesion strength, swelling index and dissolution profile.

TABLE 6:  RESULTS OF THE ADHESIVE STRENGTH AND FORCE OF ADHESION 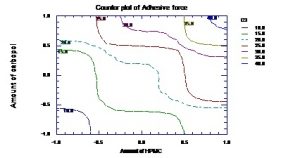 FIG. 4: CONTOUR PLOT OF THE VARIABLE RELEASE AT ADHESIVE STRENGTH 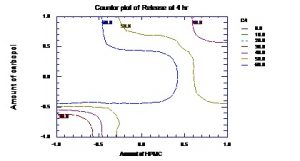 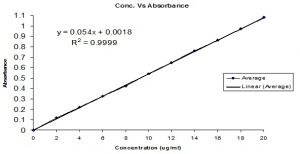