Sustained-release drug delivery system containing Ranolazine (an anti-anginal drug) with different ratios of pH dependent polymer, Eudragit L100-55 was designed by wet granulation method. The physicochemical compatibility of the drug and polymers were studied by FTIR spectrophotometer and found to be compatible. The in vitro release of Ranolazine SR tablets was studied in 900 ml of 0.1N HCl as dissolution medium using a USP dissolution paddle assembly at 50 rpm and 37±0.5°C. The promising formulation with concentration of Eudragit L100-55 polymer 12.5% showed better release of 99.78±0.99% after 24 hours. It showed Zero-order release with linearity (r=0.9447 to 0.9895). The similarity factor (f2 values) was used for the comparison of in vitro release study of the best formulation of SR tablets and marketed ER product of Ranolazine. The f2 values found to be 77.29.  Based on the similarity factor (f2 values), the F4 formulation of SR tablets can be considered as optimized formulation in comparison with marketed ER product’s drug release profile. To study the mechanism of drug release from the oral SR tablets of Ranolazine, the release data were fitted to the well-known exponential equation (Korsmeyer/ peppa’s equation) and ‘p’ values found to be 0.73-0.78. This indicates that the release of drug follows non - fickian transport. Hence the present study indicates that the formulation F4 of the oral sustained release tablets of Ranolazine provides a better option for development of oral SR tablets of Ranolazine for once-daily administration.

INTRODUCTION: Ranolazine was approved by the US FDA in January 2006 for the treatment of chronic stable angina in patients who have had an inadequate response to traditional anti-anginals. It differs from traditional anti-anginal drug therapies in that its anti-ischemic effects are independent of a hemodynamic effect (e.g. heart rate and/or blood pressure). The presently preferred route of administration for Ranolazine is oral. A typical oral dosage form is a compressed tablet, a hard gelatin capsule filled with a powder mix or granulates, or a soft gelatin capsule (soft gel) filled with a solution or suspension.

Conventional oral dosage formulations are not ideally suited to Ranolazine because the solubility of Ranolazine is relatively high at the low pH that occurs in the stomach. Furthermore Ranolazine also has a relatively short plasma half-life. The high acid solubility property of Ranolazine results in rapid drug absorption and clearance, causing large and undesirable fluctuations in plasma concentration of Ranolazine and a short duration of action, thus necessitating frequent oral administration for adequate treatment. 1, 2, 3, 4 There is therefore a need for administering Ranolazine in an oral dosage form once or twice daily that provides a drug delivery system which control the release profile and inhibit rapid release of the drug from the formulation during its residence in the stomach (where the pH is-below about 4.5) and which promotes the release of a therapeutic amount of drug from the dosage form in the lower gastrointestinal tract (where the pH is generally greater than about 4.5).

A most preferred copolymer is methacrylic acid copolymer, Type C, USP (which is a copolymer of methacrylic acid and ethyl acrylate having between 46.0% and 50.6% methacrylic acid units). Such a copolymer is commercially available as Eudragit L100-55 (as a powder)5. Sustained-release formulation of Eudragit L100-55 can be an alternative for administration of such drugs. Sustained-release drug delivery system can increases the patient compliance, effectiveness of therapy and reduce the chances of adverse effect and hypersensitivity reactions by maintaining the plasma drug concentration at the same level with in therapeutic range for the required period of time. Therefore, the basic objective of the study was to design and in vitro evaluation of sustained-release tablets of Ranolazine for effective treatment of angina-pectoris.

Preformulation studies 6: Study was carried out by using infrared spectrophotometer to find out if there is any possible chemical interaction of Ranolazine with Eudragit L100-55, Micro crystalline cellulose, and Magnesium stearate. Weighed amount of drug (3 mg) was mixed with 100 mg of potassium bromide (dried at 40 to 50oC). The mixture was taken and compressed under 10-ton pressure in a hydraulic press to form a transparent pellet. The pellet was scanned in Schimadzu FTIR 8400S spectrophotometer. The same procedure was repeated for the polymer and the physical mixture of drug and the polymer.

Preparation of standard curve 7: Ranolazine was estimated spectrophotometrically at 272 nm by using 0.1 N HCl as solvent. 100 mg of Ranolazine was accurately weighed and dissolved in 0.1N HCl (20ml) and then made up the volume to produce 100ml with 0.1N HCl. From this stock solution 1 ml was taken and diluted to 100 ml with 0.1N HCl. Several dilutions were made from this stock solution, to obtain a concentration range of 1-10 μg/ml. The absorbance was measured at 272 nm using 0.1N HCl as blank and plotted to get the calibration curve.

Preparation of sustained-release tablets of Ranolazine 8, 9, 10, 11: Six batches (F1-F6) of Sustained-release tablets each containing 500 mg of Ranolazine were prepared by wet granulation method employing variable concentrations (5.0%-17.5%) of polymer (Eudragit L100-55) as pH-dependent binder for sustaining the release of drug, microcrystalline cellulose as diluent  and magnesium stearate as lubricant. In the formulation of granules, Isopropyl alcohol and Dichloromethane were used as granulating agent (Table 1).

Total weight of the tablet is 640 mg; * indicates the percentage of Eudragit L 100-55 polymer used

Accurately weighed quantity of Ranolazine, microcrystalline cellulose, and Eudragit L 100-55 were screened through 40 mesh sieve and then blended together in a mortar for about 10 minutes. Mixture of Isopropyl alcohol and Dichloromethane (1:1) was added as a granulating agent to the blend with constant mixing for about ten minutes. The wet mass was then passed through 16 mesh sieve to obtain uniform granules and air dried. Then the dried granules were screened through 20 mesh sieve. Then magnesium stearate was added to the above dried granules and thoroughly mixed for about 2 minutes. Then the lubricated granules were compressed with eight station rotary tablet machine (Cadmach, India) using 12 mm flat circular beveledged punches to an average weight of about 640 mg/ tab.

In vitro release study 16, 17: The release of Ranolazine from prepared SR tablets (F1-F6) were studied in 900 ml of 0.1N HCl for first 2 hours and followed by pH 7.4 Phosphate buffer as dissolution medium using USP XXIV dissolution apparatus at 50 rpm and 37±0.5o C. Samples were withdrawn at specific time intervals, filtered and analyzed by UV-Visible spectrophotometer at 272nm.  An equal volume of fresh dissolution medium was replaced to maintain the sink condition. Cumulative percentage of drug release was calculated. The promising formulation selected on the base of drug release study.

RESULTS AND DISCUSSION: The main goals of treatment in angina pectoris are relief of symptoms, slowing progression of the disease, and reduction of future events, especially heart attacks and ofcourse death. All the results related to design and in vitro evaluation of oral sustained release tablets of Ranolazine and its comparative in-vitro drug release study with marketed ER product of Ranolazine were analysed and the Ranolazine SR tablet seem to be a successful formulation.

Preformulation studies: There is no appearance or disappearance of any characteristics peaks. This shows that there is no chemical interaction between the drug, polymer and excipient used in the tablets. The presence of peaks at the expected range confirms that the materials taken for the study are genuine.

Preparation of standard curve: Standard Curve of Ranolazine was determined by plotting absorbance (nm) verses concentration (mcg/ml) at 272nm and it is follows the Beer’s law (1microgram to 10 micrograms). The study also revealed better regression values (0.9987).

Tablet Thickness: The thickness of the tablets ranged from 3.9 to 4.1 mm (Table No. 2) The mean thickness was uniform in all formulations. 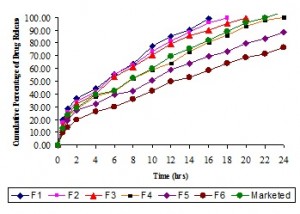 Comparative In vitro release study with marketed product: The total drug release from the marketed ER product was 104.74% after 24 hours. It was compared with the promising/best formulation of sustained release tablets (F4) to find out the similarity in drug release till 24 hours (Table 4 and Fig. 2). The similarity factor (f2 values) was used for the comparison of in vitro release study between promising/best formulation of sustained release tablets and marketed ER product of Ranolazine. The f2 values found to be 77.29 (Table 5). FDA has set a public standard of f2 value in the range 50-100 to indicate similarity between two dissolution profiles.

So, the result of the similarity factor (f2 values) indicates that the promising/best formulation of sustained release tablets can be consider as optimized formulation in comparison with marketed ER product’s drug release profile. 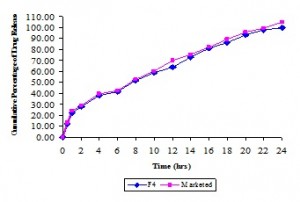 The resultant ‘n’ values found to be 0.73-0.78. The study indicates that the release of drug follows anomalous (Non - Fickian) transport which implies that the drug release from the tablet follows both dissolution and diffusion mechanisms.

CONCLUSION: The study was undertaken with an aim to design oral sustained-release tablets of Ranolazine for once-daily administration for the therapy of chronic angina. It can be concluded that the present study indicates that the oral sustained release tablets of Ranolazine provides a better option for development of a once-daily formulation of the drug. Success of the In vitro drug release studies recommends the product for further in vivo studies, which may improve patient compliance.