ABSTRACT: The aim of present work is to design a Tenoxicam loaded nanogel for the anti-inflammatory and analgesic effect of prepared nanogel. Tenoxicam is one of the NSAIDs of oxicam class; it is very potent and useful for chronic use in rheumatoid arthritis and osteriostatis. The formulations of nanogel based materials have high drug loading capacity, biocompatibility, and biodegradability which are the key points to design a drug delivery system effectively. This research article is to succinctly describe the recent development of nanogel drug delivery system concerning drug loading and swelling of drug from nanogel. To change the mode of administration of Tenoxicam for increasing its pharmacological action we prepared Tenoxicam loaded nanogel which is prepared by modified emulsification-diffusion method by using swelled polymer like noveon polycarbophil AA-1. The formulated nanogel was evaluated for particle size, zeta potential, drug content, entrapment efficiency, in-vitro drug diffusion studies, in-vitro permeation studies.

INTRODUCTION: Nanogels may be defined as nano-sized hydrogel systems, which are highly cross-linked systems in nature involving polymer systems, which are either co-polymerised or monomers 1, 2. The sudden outbreak in the field of nanotechnology has introduced the need for developing nanogel systems, which prove their potential to deliver drugs in various manners like controlled, sustained and targetable. In the emerging field of polymer sciences it has now become inevitable to prepare smart nano-systems that can prove effective for the treatment as well as clinical trials progress 3, 4, 10.

Traditionally in the name of gels we have heard of semisolid formulations with three-dimensional networks of organic systems encompassing fluids and drugs. Majorly these systems have been the part of the traditional system of topical drug delivery for local effects. Prospects of targeted drug delivery perhaps could not be established with these preparations. The significance of nano-sized microgel and hydrogel has arisen due to specific delivery system anticipation.

The wide variety of polymer systems and the easy alteration of their physicochemical characteristics have given advantage for versatile form of nanogel formulations. A recent study at clinical level has shown promising value of nanogels. Nanogels have revolutionized the field of gene therapy, since delivery of gene has now become possible within cellular organelles for gene silencing therapy systems. Nanogels are typical formulations mainly of the size range of 10 to 100 nm; by varying solvent quality and branching the volume fraction can be altered variable to maintain a three-dimensional structure. The overall review suggests that innovation in this field shall bring forth sound support to cancer, therapy in the future 3, 4.

Tenoxicam is one of the NSAIDs of oxicam class; it is very potent and useful for chronic use in rheumatoid arthritis and osteriostatis. But as with other NSAIDs, this drug is also associated with gastrointestinal (GI) side effects, such as nausea, dyspepsia, epigastric pain, indigestion, diarrhea, vomiting, and flatulence. These effects have been reported in 7-17% of patients treated, with nausea and epigastric pain being the most common symptom. Hence, the side effects associated with the oral Tenoxicam strongly support the need for a transdermal formulation of Tenoxicam. This route of administration can be devoid of GI side effects as well as associated with other benefits of topical NSAIDs (e.g. site-specific delivery). The most important advantage of transdermal drug delivery is it bypasses hepatic first-pass metabolism, enhances therapeutic efficiency and maintains steady plasma level of the drug 5, 6, 7, 8, 9.

Preparation of Tenoxicam Loaded Nano-dispersion: The Nanodispersion of the Tenoxicam was prepared by modified emulsification-diffusion method 30 mg of Tenoxicam was weighed and dissolved in 10 ml methanol containing polymer. This organic phase containing drug-polymer mixture was added into the 30 ml of aqueous phase containing tween 80, with constant stirring at 5,000 - 10,000 rpm    using high-speed homogenizer. The organic phase was adding with the help of syringe positioned with needle directly into the aqueous stabilizer solution at the rate of 0.5 ml/min.

The resulting dispersion was stirred for 5 min at 10,000-25,000 rpm and was subjected to the sonication for 5-10 min. Then double distilled water was added slowly to the dispersion with subsequent stirring for 1 h to induce diffusion of the organic solvent into the continuous phase and leading to the formation of nanodispersion. Gels of the nanodispersion were prepared by dispersing a gel-forming agent noveon polycarbophil AA-1 in the nanodispersion of Tenoxicam by using high-speed stirrer. The pH was adjusted to the 7.0 by using triethanolamine to form the gel and Tenoxicam enriched gels were stored at room temperature 11, 12.

Measurement of Particle Size of the TNX Formulation: The mean size and polydispersity index of the size distribution of the selected nanogels were determined by using Malvern zetasizer Ver. 7.11 (6000 MS) (Malvern Instruments UK). The mean particle size and size distribution were recorded 12.

Total Drug Content: For the estimation of the drug in nanogel, Tenoxicam was extracted from 1gm of nanogel was dissolved in 10 ml of methanol solvent and centrifuged at 5,000 rpm for 15 min using Microcentrifugen (Remi). 1 ml supernatant was withdrawn and diluted up to 10 ml in methanol. Diluted supernatant solution analyzed at 360 nm using UV spectrophotometer (Shimadzu 1800), against blank/control methanol. The concentration of Tenoxicam was estimated from the calibration curve. Drug content was calculated 13, 14.

Entrapment Efficiency: For the estimation of the entrapped drug in nanogel, Tenoxicam was extracted from 1 gm of nanogel was dissolved in 10 ml of methanol solvent. Centrifuged at 5,000 rpm for 15 min using microcentrifuge (Remi). 1 ml supernatant was withdrawn and diluted up to 10 ml in methanol. Diluted supernatant solution analyzed at 360 nm using UV spectrophotometer (Shimadzu 1800), against blank/control methanol. The concentration of Tenoxicam was estimated from the calibration curve. Entrapment efficiency was calculated 14.

In-vitro Drug Diffusion Studies: Dialysis membrane diffusion technique was used to study in-vitro diffusion of the drug from the prepared nanogel formulations. The receptor medium used was freshly prepared phosphate buffer pH 7.5. Dialysis membrane (Molecular weight cut off- > 12, 000, Hi media) previously soaked overnight in the receptor medium was on Franz’s Diffusion cell assembly. 0.5 gm of formulation was placed in the donor compartment, and the assembly was kept on the multi-station diffusion study apparatus (make Orchid Scientific) at 37 °C ± 2 °C and stirred at 700 RPM. Aliquots of 0.5 ml were withdrawn at pre-determined time intervals (0.5, 1, 2, 3, 4, 5, 6, 8, and 24 h) and immediately replaced by same volume of the fresh medium. The aliquots were suitably diluted with the dissolution medium and analyzed by UV-Vis Spectrophotometer at 360 nm (λmax in methanol). The data obtained from the In-vitro diffusion studies were fitted to various kinetic equations to find out the mechanism of Tenoxicam release from the nanogels 11.

Physical Characterization: The formulation shows a clear nanogel with good consistency, homogeneity, transparency, flow property, and spreadability. It shows a uniform distribution particle and uniform dispersion with the polymer.

Scanning Electron Microscopy (SEM): Shape and surface morphology of the nanogel prepared with optimized parameters was observed by scanning electron microscopy. The study shows that most of the nanogel particles were moderately spherical, the surface of the particle showed a characteristic smoothness, and the particle size was in the nanometric range, as depicted by SEM. Some of the particles were found to be in clusters, and mostly the overall formulation shows uniform dispersion of extract all over the nanogel as shown in Fig. 1. 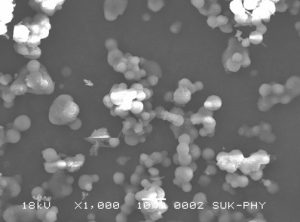 Average Particle Size, PDI, and Zeta Potential: The particle size analysis revealed that the nanogel was in the nanometer range. The size of the nanoparticles was affected by the homogenization time and the concentration of noveon polycarbophil AA-1. The size of the nanogel containing Tenoxicam was found to be between 210.8 nm to 257.6 nm which were tabulated below. The stability of the formulated nanogel was evaluated by measuring the zeta potential of the nanogel (it showed between the desired range ± 30 mV). Zeta potential of Tenoxicam loaded formulations was in the range of -6.04 to -9.40 mV and polydispersity index was found to be between 0.120 to 0.431. 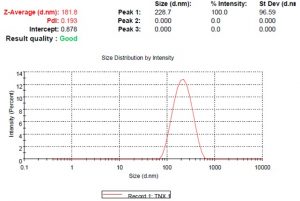 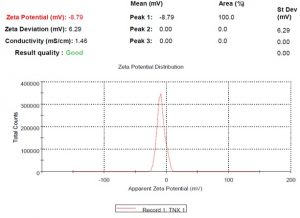 In-vitro Drug Diffusion Studies: The mean (n = 3) cumulative amounts of drug diffuse through the artificial cellophane membrane were performed for 24 h, analyzed and their values are shown in Table 2. Among these five formulation, F5 shows better release pattern as desired i.e., 85.26 ± 3.84 for 12 h, due to good homogenization time, polymer concentration and uniform dispersibility of Tenoxicam in the nanogel. 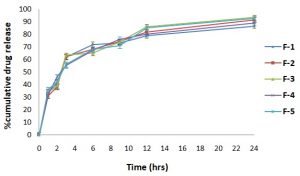 ACKNOWLEDGEMENT: The authors express their sincere thanks to TKCP, Warananagar, Panhala, Kolhapur (Maharashtra) for their support.

CONFLICTS OF INTEREST: The authors have no conflicts of interest.