Goal of the present investigation was to formulate ocular inserts of dorzolamide hydrochloride and timolol maleate for the treatment of glaucoma. Ocular inserts of dorzolamide hydrochloride and timolol maleate were prepared using different polymers ethylcellulose, Eudragit RL 100, and Eudragit RS100 by solvent casting method with an objective to increasing the contact time, achieving controlled release, reducing in frequency of administration, and improving therapeutic efficacy. The drug-excipients interaction was studied by Fourier transform infrared spectroscopy (FTIR) studies. Prepared ocular inserts were evaluated for their physicochemical properties such as uniformity of thickness, weight uniformity, tensile strength, percentage elongation, drug content, moisture loss, moisture absorption. The in vitro diffusion of drug from the inserts was studied using the classical biochemical donor - receptor compartment model fabricated in the laboratory and the formulation that showed better release profile was subjected to in vivo studies on albino-rabbits.  Ocular irritation study was performed using healthy albino rabbits and confirmed that there was no irritation in the rabbit eyes. All the inserts were found to be uniform thickness and uniform weight. The inserts possessed good tensile strength and percentage elongation. All the formulations followed a first order release pattern. Optimized formulation RSRL3 showed high correlation coefficient (R = 0.996 & 0.995 respectively for dorzolamide HCl & timolol maleate) between in vitro and in vivo release.  Stability study was carried out on RSRL3 formulation and showed no significant changes in the drug content as well as physical characteristics of the film.

INTRODUCTION: Glaucoma is a disease in which the optic nerve is damaged, leading to progressive, irreversible loss of vision. It is often, but not always, associated with increased pressure (above 21 mm Hg or 2.8 kPa) of the fluid in the eye. Glaucoma can be categorized roughly into two main types, open angle and closed angle glaucoma.

Closed angle glaucoma can appear suddenly and is often painful; visual loss can progress quickly but the discomfort often leads patients to seek medical attention before permanent damage occurs. Open angle, chronic glaucoma tends to progress at a slower rate and the patient may not notice that they have lost vision until the disease has progressed significantly 1.

Topical beta blockers are often used as a front line drugs for the treatment of glaucoma. These drugs block β2 receptors present on ciliary epithelium thereby reduces aqueous humor formation without affecting pupil size, tone of ciliary muscle, or outflow facility. This effect is probably because, down regulation of adenylcyclase due to β2 receptor blockade and a secondary effect due to reduction in ocular blood flow.

Pharmaceutical technologists are advanced in developing drug delivery systems with very precise control over drug release for a prolonged period of time, dominating the need for a frequent dosing and minimizing side effects thereby increasing patient compliance and comfort.  In conventional mode of therapy, many drugs do not reach the target site in the body in sufficient concentration because of prematurely inactivated and excreted. This problem can be overcome by administering the drugs directly into the intended site of action with lesser dose 2.

Therefore, designing formulations and delivery systems for topically applied ophthalmic chemotherapeutic agents is challenging. It requires a thorough understanding of the physiological basis of the protective mechanisms of the eye. Eye allows only 1-10% of the topically applied dose to be absorbed. These protective mechanisms include solution drainage, lacrimation, diversion of exogenous chemicals into the systemic circulation via the conjunctiva, and a highly selective corneal barrier to exclude exogenous compounds from the internal eye.  Improvement of ocular drug delivery then amounts to determining the outer boundaries as well as the maximum duration over which these protective mechanisms can be compromised without causing harm to this vital organ 3.

A basic concept in ophthalmic research and development is that the therapeutic efficiency of an ophthalmic drug can be greatly improved by prolonging its contact with the corneal surface ophthalmic inserts offer many advantages over conventional dosages forms, like increased ocular residence, possibility of releasing drug at a slow and constant rate, accurate dosing, exclusion of preservatives and increased shelf life 4.

An attempt was made to prepare ocular inserts with the target of increasing the contact time, reducing the frequency of administration, improving patient complacent and obtain greater therapeutic efficacy.

MATERIALS AND METHODS: Dorzolamide Hydrochloride and Timolol maleate were obtained as gift samples from Wockhard Pvt. Ltd., Aurangabad.  Eudragit RL100 and Eudragit RS100 were provided as gift samples from Aurobindo Pharma Ltd., Hyderabad. Ethylcellulose was obtained from SD Fine Chem Ltd.  All other chemicals and solvents used were of analytical grade. Concentrations of dorzolamide HCl and timolol maleate were measured with a UV-Vis spectro-photometer (UV 1700, Shimadzu, Kyoto, Japan) at 254 nm and 294.8 nm respectively. Interaction between dorzolamide HCl, timolol maleate and polymers was ruled out using FTIR (Jasco Corporation, Japan) and UV-Visible spectrophotometric methods.

Preparation of ocular inserts: Ocular films containing dorzolamide hydrochloride and timolol maleate were prepared by mercury substrate method using varying ratios of different grades of polymers as shown in the table 1. The polymers Eudragit RS 100 and Eudragit RL 100 were accurately weighed in requisite ratios and dissolved in equal volume of ethanol (5 ml) and methanol (5 ml) to form a 4.5% to 8% w/v solution. 120 mg of dorzolamide hydrochloride and 30 mg of timolol maleate were then added in to the polymeric solution under mild agitation until it was dissolved. Plasticizer Dibutyl phthalate (DBP) and ocular penetrating enhancer tween-20 was added to the above solution under mild agitation for complete mixing of the solution.

The mixture was set for mixing on magnetic stirrer for 4 h to ensure uniform distribution of ingredients.  Afterwards the mixture was kept in vacuum desicator and was subjected to vacuum to remove the entrapped air bubbles. The solution was poured on the mercury placed in a glass mould (5 x 3 cm2) and dried at room temperature for 24 hours. During drying the glass mould was covered with inverted funnel plugged with cotton in the stem to ensure slow evaporation of the organic solvent. The organic solvent evaporates to leave stable Eudragit RS /Eudragit RL (RS/RL) films.

After drying, the films were taken out and were cut into round shaped inserts using tablet punch of 9 mm diameter.  All the inserts were wrapped in wax paper and were kept in desciator till further use 5.  Here the words films and ocular inserts were carefully used.  Former represents 5 x 3 cm2 and later represents 9 mm diameter in size.  Similarly dummy films were prepared without adding drug. Films with any imperfections such as entrapped air, differing in thickness, weight or content uniformity were excluded from further studies.

Both the drugs obey Beer-Lambert’s law in the concentration range employed in the method.  The result of analysis has been validated by recovery studies 5, 6.

Physical appearance: All the prepared ocular films and inserts were evaluated for their physical appearance.  The parameters such as transparency, color, texture, and other defects were studied.

RESULTS AND DISCUSSION: In this present study, effort has been put to prepare controlled release combined drug dorzolamide HCl and timolol maleate ocular inserts Eudragit RL 100, Eudragit RS 100 and Ethyl cellulose to control the drug release for prolonged period of time.  A suitable analytical method for dorzolamide hydrochloride and timolol maleate was developed by UV Spectroscopy. Dorzolamide hydrochloride and timolol maleate showed maximum absorption at wavelength 254.0 nm & 294.8 nm respectively in STF pH 7.4. Drug-polymer compatibility study by UV method, and FTIR method, ruled out that no interaction between the drug and selected polymers used in the formulations and confirmed their purity. The IR spectra of pure drugs and its combination with polymers are shown in figure 1. 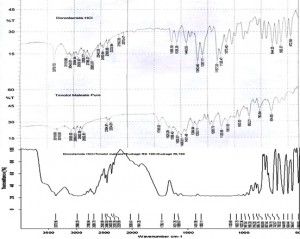 Various formulations were developed by using release rate controlling and bioadhesive polymers like Eudragit RS 100, Eudragit RL 100, and Ethyl cellulose in combinations by solvent casting method with incorporation of tween-20 as a penetration enhancer and dibutyl phthalate (DBP) as a plasticizer.

Developed ocular films possessed the required physicochemical properties such as translucent, smooth in texture, uniform in appearance and showed no visible crack or imperfection.  A few defective films formed were eliminated from the study. Drug loaded ocular inserts were tested for weight uniformity. The data of weight uniformity, moisture absorption, moisture loss, thickness, weight uniformity and tensile strength studies are shown in Table 3. Perusal to the table indicates that the ocular inserts were found uniform in thickness with standard deviation ranging from 0.0015 to 0.0681 mm.

Ocular films did not show any cracks even after folding for more than 200 times which reflects the flexibility of the films. Folding endurance did not vary when the comparison was made between plain films and drug loaded films. Surface pH was within the range of 6.2 – 7.5 which confirms that prepared inserts would not alter the pH of tear fluid and cause no irritation of eye so obviously achieve patient compliance.

Swelling of the films observed in STF (pH 7.4) is as shown in Figure 2.  The results of swelling studies revealed that in all formulations the swelling index was not high as the polymers used in the preparation of inserts were hydrophobic. However, swelling index was observed to be a function of concentration of Eudragit RL 100.  With decrease in concentration of Eudragit RL100 there was decrease in the swelling index of inserts which could be attributed to the high permeability of the polymer owing to the presence of more number of quaternary ammonium groups in the structure.

The order of inserts for their increase in weight due to swelling is RSRL2 < RSRL4 < RSRL1 < RSRL3 < RSRL5 < RSRL6. The results reveals that swelling was insignificant in all the formulations indicating that the prepared ocular inserts could not cause, as extraneous body in the eye, less discomfort. 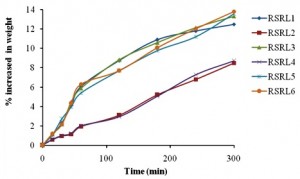 The order of tensile strength for Eudragit ocular films is RSRL3 > RSRL2 > RSRL5 > RSRL6 > RSRL1 > RSRL4 as shown in the figure 3. Eudragit films exhibited less percentage elongation as the concentration of Eudragit RS 100 was increased 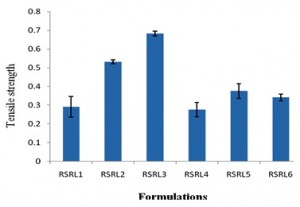 From the results of drug content determination, it was inferred that there were proper distribution of both drugs in the films and the deviations were within the acceptable limits. The result of the ocular irritation study proved that the optimized formulation RSRL3 is non irritant to the rabbit eye. 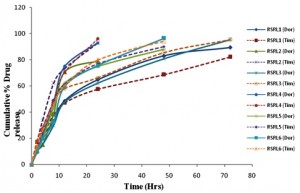 In vivo Drug Release Study: In vivo drug release study was carried out on the optimized formulation (RSRL3). The study was conducted in albino rabbits by measurement of the residual drug content in the ocular inserts at periodic time intervals.  Rabbits which were subjected for in vivo study didn’t show any irritation, inflammation and abnormal discharge which confirmed the safety of the polymers used in the formulation. The drug release from the formulation (RSRL3) after 72 hours was found to be 98.22% & 98.82% respectively for dorzolamide HCl and timolol maleate. The in vivo drug release from the optimized formulation is plotted in figure 5. 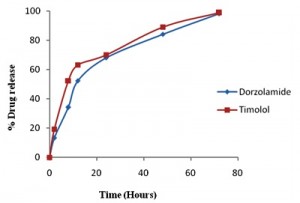 The controlled release of dorzolamide hydrochloride and timolol maleate was observed under in vivo condition and complete drug release was taken place in about 60 hours however the in vitro studies showed that the drug release lasted for 72 hours.  It may be due to factors like tear flow rate, tear volume secretion, etc. The correlation coefficient (R2) value for the percentage drug released in vivo was found to be very high, and a positive correlation of both drugs was found to be significant (R2 = 0.995 & R2 = 0.996).

The concept of in vitro and in vivo correlation studies was used in pharmaceutical research work because a simple in vitro release study on a drug product will be insufficient to predict its therapeutic efficiency.  Correlation between in vitro release behavior of a drug and its in vivo absorption in rabbits must be established experimentally to reproduce therapeutic response.

The formulation RSRL3 was selected as the best formulation based on the prolonged in vitro release of the drug and the same was used for in vivo studies conducted in rabbits.