DESIGN AND OPTIMIZATION OF GASTRORETENTIVE DRUG DELIVERY SYSTEM OF SITAGLIPTIN

DESIGN AND OPTIMIZATION OF GASTRORETENTIVE DRUG DELIVERY SYSTEM OF SITAGLIPTIN

ABSTRACT: In the present study, Gastro retentive floating drug delivery systems (GFDDS) of sitagliptin, an anti diabetic drug, have been designed to increase the therapeutic efficacy & gastric residence time and to reduce frequency of administration. Therefore a sustained release medication was advantageous so as to achieve the prolonged therapeutic effect and to reduce peak and valley effect in plasma concentration. This can be achieved by formulating modified gastro retentive sustained release dosage forms which resides in the stomach for sufficient time to release the drug in vicinity of the absorption zone. The tablets were prepared by direct compression method, by employing polymers like HPMCK100, Poly vinyl pyrrolidine and polyacrylic acid respectively in various concentrations. The prepared granules were evaluated for angle of repose, bulk density, tapped density, compressibility index and Hausner’s ratio and results obtained were satisfactory compressed formulations were further evaluated for thickness, friability, hardness, swelling index and in-vitro dissolution studies. All the formulations showed good results which were compliance with pharmacopoeial standards. In vitro dissolution study was carried out in pH 1.2 buffers. From in vitro dissolution studies, the cumulative % drug release of all formulations ranged from 92.96% – 99.28% at the end of 12 hrs. The in vitro drug release data was fitted into various mathematical model.

INTRODUCTION: High level of patient compliance has been observed in taking oral dosage forms is due to the ease of administration and handling of the dosage form. A lot of advancements have been seen in oral sustained drug delivery system in the last few decades. But still oral sustained drug delivery system is complicated by limited gastric residence time. Rapid GI transit can prevent complete drug release in the absorption zone and reduce the efficacy of the administered dose since the majority of drugs are absorbed in stomach or the upper part of small intestine.

To overcome these limitations, various approaches have been proposed to increase gastric residence of drug delivery systems in the upper part of the gastrointestinal tract like floating drug dosage systems (FDDS). Gastroretentive systems can remain in the gastric region for several hours and hence can significantly prolong the gastric residence time of drugs that offer numerous advantages; improves bioavailability, reduces drug waste and improves solubility for drugs that are less soluble in a high pH environment of small intestine 1.

The main objective of the study is to formulate Gastroretentive dosage forms (GRDFs) of sitagliptin in order to be retained in the stomach for a prolonged time and release their active ingredients and thereby enable sustained and prolonged input of the drug to the upper part of the gastrointestinal (GI) tract. This technology has generated enormous attention over the last few decades owing to its potential application to improve the oral delivery of some important drugs for which prolonged retention in the upper GI tract can greatly improve their oral bioavailability and/or their therapeutic outcome. Gastroretentive dosage form (GRDFs) are designed on the basis of various approaches like, formulating high density (sinking) system that is retain in the bottom of the stomach, low density (floating) system that remain buoyant above gastric fluid, mucoadhesive system that cause bioadhesion to stomach mucosa, expandable, unflodable or swellable system which limits the emptying of dosage form through the pyloric sphincter of stomach, super porous hydrogels magnetic systems etc 2.

The gastroretentive tablets results in release of the drug in to the more absorptive regions of the GIT, is in to the stomach and the small intestine rather than into the large intestine where drug absorption is poor or erratic. This is achieved by adjusting the time period of release for the drug so that it is about the same as or less than the retention time of the tablets at the site of absorption. Thus the system is not transported past the “absorption window” prior to releasing the entire drug, and the maximum bioavailability is attained. Sitagliptin is (R)-4-oxo-4-[3-(trifluromethyl)-5,6- dihydro [1,2,4] triazolo[4,3-a] pyrazin -7(8H)-yl]-1-(2,4,5- trifluorophenyl) butan-2-amine. Sitagliptin blocks dipeptidyl peptidase-4 (DPP-4) activity and it increasesincretin levels (GLP-1 and GIP) which inhibit glucagon release, in turn decreases blood glucose, but more significantly increases insulin secretion. Sitagliptin is for people with type-II diabetes (non-insulin-dependent) and sometimes used in combination with other diabetes medications, but is not for treating type-I diabetes3.

In the present study Gastro retentive drug delivery system containing Sitagliptin was formulated which would remain in stomach for prolonged period of time in view to maximize bioavailability of the drug and increased patient compliance.

It is the ratio of total mass of powder to the bulk volume of powder. It was measured by pouring the weighed powder into a measuring cylinder and the volume was noted. It is expressed in G/CC and is given by

Where, M - Mass of the powder

The accurately weighed quantities of granules were taken in to funnel. The height of the funnel was adjusted in such a way that the tip of the funnel just touched the apex of the  granules. The granules were allowed to flowfreely onto the surface. The diameter of the powder cone was measured and angle of repose was calculated using the formula.

Db – Bulk density of the powder

All the ingredients were passed through sieves separately and weighed as per the formula given in Table 1. Weighed ingredients were transferred into polythene bag and mixed for 15 minutes. After mixing thoroughly the powder is subjected for compression. The powder was evaluated for various pre-compression parameters like bulk volume, tapped volume, bulk density, tapped density and angle of repose. After compression they were evaluated for appearance, diameter, tablet weight, thickness, hardness, and friability, uniformity of dispersion, weight variation, and content uniformity. The in vitro dissolution profile and stability studies were also carried out 4.

The matrix tablets prepared were evaluated for the following parameters:

To study weight variation, 20 tablets of each formulation were weighed using an electronic balance and the test was performed according to the official method.

For each formulation, the hardness and friability of 6 tablets were determined using the Monsanto hardness tester (Cadmach, Ahmedabad, India) and the Roche friabilator (Campbell Electronics, Mumbai, India) respectively.

Five tablets were weighed and triturate, from that transfer an accurately weighed portion of the powder equivalent to about 100mg of sitagliptin in a 100ml volumetric flask containing buffer solution and then concentration is measured at λ max 271 nm.

The in-vitro dissolution studies were performed using the USP-II (Paddle) dissolution apparatus at 50 rpm. The dissolution medium consisted of 900ml of phosphate buffer pH 6.8, maintained at

37±0.50C. An aliquot (5ml) was withdrawn at specific time intervals and drug content was determined by UV-visible spectrometer at 271nm. The study was performed in triplicate.

The results of in-vitro release profile obtained for all the formulations were plotted in modes of data treatment as follows:-

Stability of a pharmaceutical product may be defined as the capability of a particular formulation, in a specific container, to remain within its physical, chemical, therapeutic and toxicological specifications throughout its shelf life.

The optimized formulation was subjected for two month stability study according to ICH guidelines. The selected formulations were packed in aluminium foils, which were in wide mouth bottles closed tightly. They were then stored at 40ºC / 75% RH for 2 months. Then samples were evaluated for their content and in vitro dissolution studies.

The compatibility studies revealed both drugs and excipients were compatible after FT IR studies, the results shown in Fig. 1 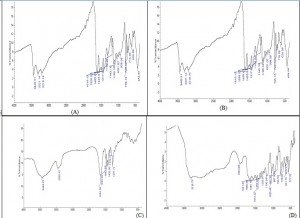 All the tablet formulations were evaluated for their hardness as per procedure and all the formulations have an average hardness in the range5.5±0.07 Kg/cm2 and 5.3±0.009 Kg/cm2. Which was found to be acceptable and the results are shown in the Table 3.

The drug release pattern was studied for all the formulations for 12 hours by using paddle type dissolution apparatus in both stimulated gastric fluid and intestinal fluid of pH (1.2)& (6.8) respectively. The percentage cumulative drug release profile was found to be in the range of 92.9% to 99.28%.The maximum release was found to be 99.28% from F9 and minimum release of 92.9% in F5 formulation. From the above studies it was concluded that the formulation F5 & F9 containing HPMC K1OOM, poly vinyl pyrrolidone and Polyacrylic acidwith increasing concentration has shown maximum release when compared to other formulation. The results are shown in the Fig.2. 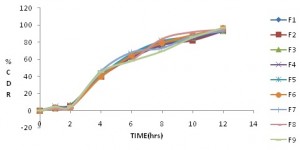 The examination of the correlation coefficient ‘r’ indicated that the drug release followed dissolution controlled mechanism from the cumulative drug release, as the values of ‘r’ for first order (ranged from 0.9591 to 0.9842) found to be more in comparison to zero order (ranged from 0.9282 to 0.9438) and Higuchi's square root of time (ranged from 0.9390 to 0.9770). It was understood to be predominant first order release pattern. Further, to understand the drug release mechanism, the data were fitted into Peppas exponential model Mt/M∞=Ktn, where Mt/M∞ is the fraction of drug released after time ‘t’ and ‘K’ is kinetic constant and ‘n’ is release exponent which characterizes the drug transport mechanism.

The selected formulation F5 and F9 were subjected to accelerated stability studies for 60 days at 25ºC / 60% RH, 30ºC / 65% RH, 400C / 75% RH, in-vitro release study was performed on every 30 days and showed negligible change in release profile. The formulation subjected for stability studies was found to have no change in the physical appearance and drug content. The result is shown in the Table 4.

CONCLUSION: From the above study it can be concluded that the polymer plays a major role in the design of oral controlled release of gastro retentive tablet. The study reveals that the release of drug was good when the gastro retentive tablet contained polymers of Poly vinyl pyrolidone and Poly acrylic acid and also shows anomalous diffusion kinetics. Hence it clearly manifestates the necessity of combining different classes of polymer to get an acceptable pharmacokinetic profile in the fluctuating in-vivo environment.

ACKNOWLEDGEMENT: The authors are sincerely thankful to principal Sri Adichunchanagiri College of Pharmacy, B.G. Nagara for provided us infrastructure facilities and moral support to carry out this research work