ABSTRACT: Purpose: To formulate and evaluate Olanzapine immediate-release tablets using direct compression. Immediate release of drug from the dosage form is required for rapid onset of action and produce an immediate therapeutic effect. Method: Tablets were formulated using two different natural super disintegrants like Fenugreek and Isabghul and in combination by using Response Surface Methodology. The selected independent variables (Y1) Fenugreek and (Y2) Isabghul showed a significant effect on dependent variables, i.e., disintegration time (X1) and percentage drug release (X2). Drug and excipients compatibility studies were done by FTIR studies. Results: No significant drug-polymer interactions were observed in FTIR studies. The prepared tablets were evaluated for weight variation, friability, hardness, disintegration, and dissolution. A formulation containing 2% fenugreek and 5% isabghul was offered the relatively rapid release of Olanzapine when compared with other concentrations employed in this investigation. The formulation with 4.2% Fenugreek and 5% Isabghul was optimized, and the tablets were evaluated. Conclusion: The optimized formulation AOF14 showed the desired level of % CDR 98.43 at the end of 30 minutes, and their similarity factor (f2) was calculated with innovator whose value was found to be 97.52% at the end of 30 min.

INTRODUCTION: Immediate-release tablets are those which disintegrate rapidly and get dissolved to release the medicaments. The immediate-release may be provided for by way of an appropriate pharmaceutically acceptable diluent or carrier, which diluents or carrier does not prolong, to an appreciable extent, the rate of drug release and/or absorption 1.

Olanzapine is a benzodiazepine belonging to Antipsychotics agents, and it is used in the treatment of schizophrenia, depressive episodes associated with acute manic episodes, and maintenance treatment in bipolar disorder. It is a relatively new drug in the market 2.

The pharmacokinetics of Olanzapine is linear and dose-proportional within the approved dosage range from 1 mg up to 20 mg. Olanzapine is well absorbed following oral administration in both fed and fasted states. Food does not affect the rate or the extent of Olanzapine absorption 3. The absolute bioavailability is only approximately 31.5% due to extensive hepatic metabolism.

Olanzapine chemically is 2-methyl-4-(4-methyl-piperazin-1-yl)-5H-thieno [3,2-c][1,5] benzodia-zepine 4. The proper choice of superdisintegrants and its consistency of performance are of impor-tance to the formulation of a rapidly disintegrating dosage form or immediate releasing dosage forms.

Trigonella Foenum-graceum, commonly known as Fenugreek, is an herbaceous plant of the leguminous family 5. Fenugreek seed mucilage is also known as Billy-goat Clover, Camel Grass and Common Fenugrec and is widely used as a natural disintegrant in conventional formulations 6.

Ispaghula mucilage consists of the epidermis of the dried seeds of Plantago ovate was carried out to study the disintegrant property of mucilage in comparison with crospovidone 7.

Trigonella Foenum-graceum, commonly known as Fenugreek, is an herbaceous plant of the leguminous fami.

The main aim of the work was to formulate Olanzapine immediate-release tablets using natural super disintegrants at different concentrations by Response Surface Methodology.

Response surface methodology (RSM) was used in the development and optimization of formulations Based on the principles design of experiments (DOE). The methodology involves the use of various types of experimental designs, generation of polynomial mathematical relationships, and mapping of the response over the experimental domain to select the optimum formulation 8, 9, 10. Box-Behnken statistical design is one type of RSM design that is an independent, rotatable or nearly rotatable, quadratic design having the treatment combinations at the midpoints of the edges of the process space and at the center 11, 12. Independent variables used such as Fenugreek (X1), Ishabgul (X2), and dependent variables are disintegration time (Y1), and percentage drug release in 0.1N HCL for 1 h (Y2) was studied.

Computer-Aided Optimization Design: A computer-aided response surface methodology using design with 2 factors, 2 levels were employed for optimization study. This design is suitable for exploration of quadratic response surfaces, thus helping in optimizing a process using a small number of experimental runs (13 runs) with Design expert (version 8.0.1), RSM to study the effect of the amounts of various super disintegrants used as two independent variables (factors), on the property of Olanzapine immediate-release tablets. The disintegration time and % cumulative drug release were selected as dependent variables 13.

FTIR (Fourier Transform Infrared Spectro-scopy) Studies: The infrared (IR) spectra were recorded using an FTIR spectrophotometer (Bruker Alpha) by KBr pellet method in the wavelength region between 4000 and 400 cm-1. The spectra obtained for Olanzapine and the physical mixture of drug with polymers were compared to check the compatibility of drug with polymers.

Preparation of Olanzipine Immediate Tablets: The drug and the excipients used were all passed through 80-mesh sieve. The active ingredient Olanzapine and each single diluent mannitol, polymer (MCC) and binder (guargum), lubricant (Magnesium stearate), glidant (Talc) were blended together by dry mixing in a laboratory mixer for 10minutes, and superdisintegrants were added. The mixture was compressed by using an eight-station tablet punching machine (Elite scientific and equipment) with an 8mm standard flat round punch and die set at compression force 4-6 ton. The hardness of all tablets was adjusted to 4.5 to 5.0 Kg/cm2. The total weight of the tablet was found to be 150 mg 14.

Content Uniformity: The tablets are tested for their drug content uniformity. At random 10 tablets are weighed and powdered. The powder equivalent to 100 mg of the drug was weighed accurately and dissolved in 100 ml of 0.1N HCl. The solution is shaken thoroughly. The undissolved matter is removed by filtration through Whatman no.1 filter paper (0.45µm). The absorbance of the diluted solutions is measured at 260 nm. The concentration of the drug is computed from the standard curve of Olanzapine in the 0.1N HCl.

In-vitro Dissolution Studies: In-vitro dissolution study of Olanzapine is carried using the USP dissolution test apparatus, type II (Paddle method) (Lab India 8 basket dissolution apparatus) at 37 ºC ± 0.5 ºC. The paddle rotates at a speed of 50 rpm. The tablets are placed in the dissolution apparatus containing 900ml of 0.1N HCl buffer as a medium. Samples are withdrawn (5ml) and are replaced with an equal amount of fresh dissolution medium at particular time intervals; samples are immediately filtered through Whatmann filter paper and diluted with the dissolution media. The absorbance’s of these diluted samples is noted at λmax 260 nm using UV-Visible Spectrophotometer. The amount of the drug present in the samples is calculated by using the calibration curve constructed from the reference standards. Cumulative % drug release is plotted against time is calculated 15. 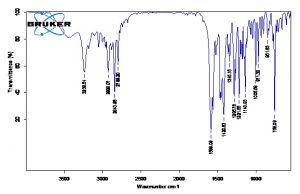 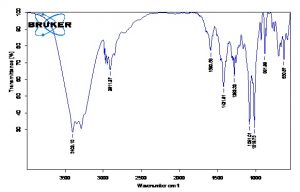 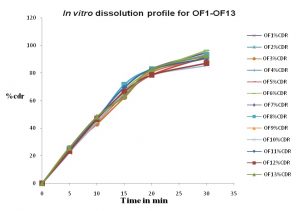 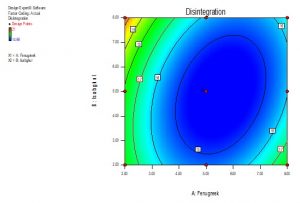 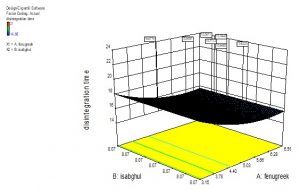 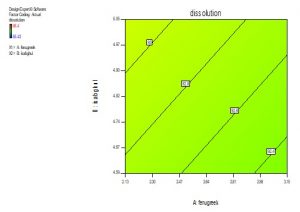 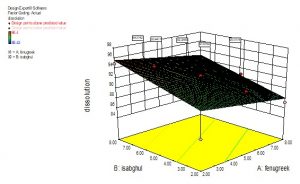 All the values are calculated as (Mean ±SD, n=3

Percentage prediction error can be calculated by using below formula.

RESULTS AND DISCUSSION: The immediate release tablets of Olanzapine were successfully prepared by direct compression method using natural superdisintegrants fenugreek and isabghul at varying concentrations and an optimized formula was selected.

Compatibility Studies: FTIR spectrum of pure drug and physical mixture of drug and excipients were studied. In the present study, it was observed that, there were no shifts in individual main peaks of the pure drug substance. So this indicates that there were no incompatibility issues of drug with formulation excipients used. From Fig. 1 and 2, it is evident that the absorption bands at 3237.2 1 cm-1, 2927.57 cm-1, 1588.73 cm-1, and 1419.84 cm-1 indicate the presence of Amine (N-H Stretch), Alkane (Aliphatic C-H stretch), Nitrile (C-N stretch), and Thiole (C-S stretch) correspond to the Olanzapine pure drug.

Post-compression Parameters: All the formulated tablets containing the active drugs were evaluated to find the physical properties like Hardness, thickness, friability, and drug content Table 5. In the weight variation test, the pharmacopeial limits of percentage deviation for tablets whose weight is less than 230 mg are ±7.5%. The average percentage deviation of all the tablets friability was found within the limit, which was less than 1%. The hardness of the tablets was found to be acceptable and uniform from batch to batch. The drug content was also found uniform and within the prescribed limits.

From the release profiles, it was concluded that the variation in concentrations of disintegrants had a variable effect on drug release. The effect of fenugreek and isabghul could be observed at a constant level. Among all formulations (OF1-OF13), OF6 has the drug release of 96.4% Formulation containing fenugreek and isabghul showed the early release in dissolution medium, but as the concentration of isabghul enhances, the drug release enhances due to its more disintegrant property.

Data Analysis: All responses were fitted to Quadratic and linear models, as suggested by Design expert software 8.0.7.1. A quadratic model is suggested for disintegration time and the % cumulative drug release. All dependent and independent variables are shown in Table 6.

To optimize all the responses with different targets, a multi-criteria decision approach (a numerical optimization technique by the desirability function and a graphical optimization technique by the overlay plot) was used. The optimized formulation was obtained by applying constraints on dependent variable responses and independent variables. Constrains were: disintegration time in 0.1N HCl; % CDR at 30 min. These constraints are common for all the formulations. The recommended concen-trations of the independent variables were calculated by the Design expert software from the above plots, which has the highest desirability near 1.0.

The critical formulation factors that affect the desired response of the formulation were found to be different concentrations of the fenugreek was 4.2 %, and isabghul is 5%.

The statistically optimized formulation fulfilled all the physicochemical criteria. In-vitro drug release studies were carried out on the prepared optimized formulation. The in-vitro drug release study showed that the %CDR was and is in close agreement with the model predictions. The relative error (%) between the predicted and experimental values confirms the predictability and validity of the model.

The optimized formulation gave disintegration, % CDR values of 15.41 sec and 98.43% in 30 min respectively.

CONCLUSION: The central composite design was used to optimize Olanzapine immediate-release tablets using Natural Super disintegrants by which can be used as pharmaceutical excipients. Based on the results, suitable disintegrants were selected for formulation development by response surface methodology. So natural superdisintegrant like fenugreek, isabghul exhibited faster drug dissolution, which lead to improving effective therapy, patient compliance, and satisfies all the criteria as an immediate-release tablet. The Immediate release tablets of Olanzapine with the super-disintegrant fenugreek 4.2% and isabghul 5% matched with the in-vitro dissolution profile of the innovator drug (zyperexia) at each and every time interval as well as the overall drug release within 30 min. So, the olanzapine immediate-release formulations of AOF14 of 150 mg & ZYPEREXIA of 100mg had met the desired in-vitro drug release.

CONFLICTS OF INTEREST: All authors declare that they have no conflict of interest.