ABSTRACT: The objective of present research work is design and in-vivo evaluation of ibrutinib self-nanoemulsifying drug delivery system (SNEDDS) for the enhancement of oral bioavailability. Box-Behnken design was used for the study and the results analysed using response surface methodology. Ibrutinib SNEDDS were prepared with various oils, surfactants and co-surfactants and tested particle size, PDI, zeta potential, refractive index, drug release and TEM studies. The optimized ibrutinib SNEDDS has the composition of capryol 90, cremophore EL and transcutol HP. Based on the particle size and entrapment efficiency and in-vitro dissolution studies; F2 is identified as optimized formulation with 85% drug released, whereas less than 1% was released from pure drug at end time of 30 min. In-vivo bioavailability data reported in male wistar rats indicate higher concentration of drug in plasma implying enhanced systemic absorption of ibrutinib from SNEDDS formulation. The Cmax and AUC0-inf values of optimized SNEDDS was considerably higher (p<0.05) than pure drug formulation. The oral bioavailability of optimized SNEDDS increased around 12 folds when compared with pure drug. Ibrutinib SNEDDS was successfully prepared, and results indicate that oral bioavailability of ibrutinib optimized SNEDDS was significantly improved when compared with pure drug. Therefore, the results suggest that the optimized formulation has a great potential for clinical application in the effective management of lymphocytic leukaemia.

In the last few years, nanoemulsions and SNEDDs have been found to be effective approaches for the targeting of several anticancer drugs like 5-fluorouracil, 5-FU conjugates, methotrexate, paclitaxel and isoniazid analogue to melanoma cells for enhanced therapeutic effects of these drugs. All the materials used in the preparation of ibrutinib SNEDDS are nontoxic and fall under generally regarded as safe category of excipients 1, 2.

RSM is generally applied to experimental situations where several independent variables influence a response variable. The Box–Behnken design (BBD) is RSMs for understanding the effects of independent and dependent factors 3-6. In the present study ibrutinib SNEDDS was prepared and performed in-vivo bioavailability studies on wistar rats.

Optimization Experiments: Ibrutinib loaded SNEDDS optimization was conducted using DoE. Response surface methodology (RSM) is a statistical method for various processes using specially designed experimental programs to achieve desired response. Experimental design with RSM consists of a group of empirical techniques devoted to the evaluation of relations existing between a cluster of controlled experimental factors and the measured responses according to one or more criteria. Identification and evaluation of the most significant parameters and their interaction during the experimental process can be done by statistical evaluation and experimental design thereby minimizing the number of runs.

Box–Behnken Experiment Design: A three-factor, three-level Box-Behnken Design employed to explore and optimize the interaction and quadratic effects of various ingredients in the formulation on the performance of the SNEDDS 12. The variables that were chosen as dependent and independent are specified in Table 1. Table 2 shows 17 randomized experimental run for the selected factors, including 5 replicates at mid point (asterisk-marked) generated from a three factor, three-level BBD and their corresponding responses. The BBD matrix was generated using Design Expert® software (Version8.0, Stat-Ease Inc., Silicon Valley, CA, USA), and the data obtained were analysed by the same software. Design Expert software was utilized for fitting all the responses into second-order quadratic model 13, 14.

Preparation of Ibrutinib SNEDDS: The ibrutinib SNEDDS were prepared by mixing oil phase (capryol 90), surfactant (cremophor EL), and co surfactant (transcutol HP) and warming it at 40 °C, then 140mg of ibrutinib was added to the mixture and vortexed to facilitate the uniform dispersion of ibrutinib. The mixture was then allowed to equilibrate at RT. By changing the concentrations of oil phase, surfactant, co-surfactant mixed with 50 mg/g of drug, a total of 17 such experiments was carried out using experimental design. The prepared ibrutinib loaded SNEDDS were filled into size 0 HPMC capsule shells.

Percentage Drug Content: Drug content was estimated by dissolving each formulation in 10ml methanol, 10 min vortexing the same followed by filtration of contents with a membrane filter (00.45 mm) and then analysing the filtrate for amount of drug at 260 nm against blank by a spectro-photometer.

In-vitro Release Studies of Ibrutinib SNEDDS: In-vitro release studies on developed ibrutinib SNEDDS and IBR suspension (ibrutinib suspension was prepared in sodium carboxymethyl cellulose) were performed using dialysis membrane. The drug release investigation conducted in USP XXIV dissolution apparatus containing pH 6.8 phosphate buffer (900ml) as dissolution medium. The speed of apparatus set to 50 rpm, temperature maintained at 37 ± 0.5 °C. About 1 ml of each ibrutinib SNEDDS and ibrutinib suspension was filled into ready to- use dialysis bag and tied with dissolution apparatus. At predefined intervals 3ml of sample was withdrawn with simultaneous replacement with fresh dissolution media. The ibrutinib content in each dissolution sample was quantified spectrophoto-metrically at the wavelength of 260 nm as reported in literature.

Animal Preparation: Healthy wistar rats were (weighing 150-180g) selected for this study, all the animals were healthy during the period of the experiment. All efforts were made to maintain the animals under controlled environmental conditions (temperature 25 ºC, Relative Humidity 45% and 12 h alternate light and dark cycle) with 100% fresh air exchange in animal rooms, uninterrupted power and water supply.  Rats were fed with standard diet and water ad libitum. The protocol of animal study was approved by the institutional animal ethics committee no: ARTI/CPCSEA/2017/22/A.

Study Design: The male wistar rats were categorized into two groups that were offered with food post four hours of dosing. Group I administered orally with pure ibrutinib suspension in 0.5% methocel and group II with administered prepared ibrutinib SNEDDS diluted in 0.5% methocel at a dose of 10mg/kg as per animal body weight .500 µL sample of blood collected from the femoral artery of the animals at varying time intervals of 0, 0.50, 1, 1.50, 2, 2.50, 3, 4, 5, 6, 8, 12, 16, 20, 24 h post administration and mixed with heparin to check clotting. The plasma isolated by centrifugation 5000 rpm and stored at −20 °C 17, 18, 19.

Construction of Ternary Phase Diagram: Three component system chosen for the ibrutinib loaded SNEDDS preparation was capryol 90 - cremophor EL40 - transcutol P Fig. 1. The selection was done based on preliminary trials performed. Self-nanoemulsifying region that was termed efficient was shown as grey region of the diagram. Each component ranges on the basis of diagram selected as follows: 10% ≤ Capryol90 ≤ 30%, 45% ≤ Cremophor El ≤ 75%, 10% ≤ Transcutol HP ≤ 30%. 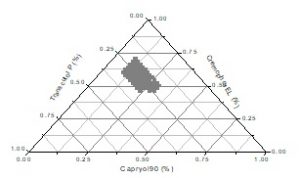 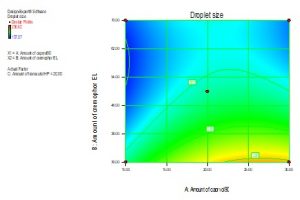 FIG. 2A: CONTOUR PLOT DISPLAYING THE INFLUENCE OF AMOUNT OF CAPRYOL90 AND AMOUNT OF CREMOPHOR EL ON DROPLET SIZE FIXED LEVEL OF C 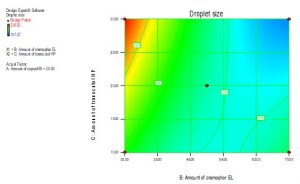 FIG. 2B: CONTOUR PLOT DISPLAYING THE INFLUENCE OF THE AMOUNT OF CREMOPHOR EL AND AMOUNT OF TRANSCUTOL HP ON DROPLET SIZE FIXED LEVEL OF A

Statistical Analysis of the Designed Experiment: Box–Behnken design formed the basis for carrying out series of experiments. Table 2 specifies the independent variable along with their corres-ponding responses. The droplet size range (Y1) for all runs observed between 157.07 – 236.62 nm.

Similarly, the range for PDI (Y2) was 0.206 – 0.312 and cumulative drug release in percent (Y3) was within 54.28-83.78%. A second quadratic model was used for data fitting whose adequacy was justified by Design- Expert software provided multiple correlation coefficient, lack of fit and ANOVA tests.

Response Surface Analysis: Stat-Ease Design Expert ® software V8.0 was utilized for analysing data, to get regression equation, regression coefficient and analysis of variance (ANOVA). The particle size of nanoparticles that was between 157.07-236.62 nm. Significant influence of amount of capryol 90, cremophor EL amount and amount of transcutol HP on droplet size are represented in Fig. 2A and 2B. 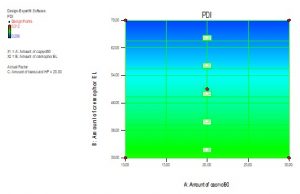 FIG. 3: CONTOUR PLOTS DISPLAYING THE INFLUENCE OF AMOUNT OF CAPRYOL90 AND AMOUNT OF CREMOPHOR EL ON POLYDISPERSITY INDEX AT FIXED LEVEL OF C 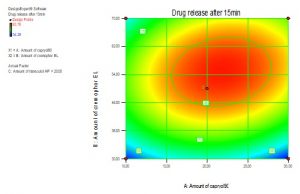 FIG. 4A: CONTOUR PLOT SHOWING THE INFLUENCE OF AMOUNT OF CAPRYOL 90 AND AMOUNT OF CREMOPHOR EL ON PERCENT DRUG RELEASE AT FIXED LEVEL OF C 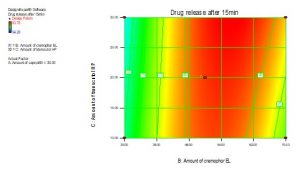 FIG. 4B: CONTOUR PLOT SHOWING THE INFLUENCE OF THE AMOUNT OF CREMOPHOR EL AND AMOUNT OF TRANSCUTOL HP ON PERCENT DRUG RELEASE AT FIXED LEVEL OF A 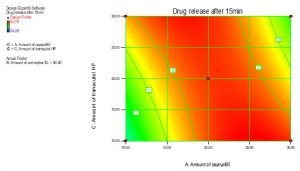 FIG. 4C: CONTOUR PLOT SHOWING THE INFLUENCE OF AMOUNT OF CAPRYOL90 AND AMOUNT OF TRANSCUTOL HP ON PERCENT DRUG RELEASE AT FIXED LEVEL OF B

Characterization of SNEDDS: Enhancement of drug absorption by oral delivery can be achieved by decreasing the size of the particle to nanorange. The drug loaded nanoparticles were sonicated prior to size and morphology determination. All the three formulations were well dispersed in aqueous media with no aggregates. Particle size distribution and ZP of all formulations was analysed for all the formulated batches. The particle size of nanoparticles loaded with drug ranged from 167.9 nm to 181.7 nm The PDI values ranges from 0.208 to 0.228, indicating the narrow range of size distribution. Inclusion of ibrutinib in SLN’s lipid matrix was indicated by the negative surface charge of prepared formulations that is a key regulating factor for particle stability. This zeta potential ranged between -17.6 mV to -21.4mV for all prepared formulations.

Refractive Index: Isotropic nature of nano-emulsion produced from SNEDDS is characterized by determination of refractive index. Even after conversion to nanoemulsion, prepared three batches were isotropic which was confirmed by determining refractive index that was in range of 1.35-1.45.

Transmission Electron Microscopy: Transmission electron microscopy (TEM) was carried out to determine structure and morphology of optimized batches. Micelles formation in spheres in size range 150-200nm was revealed by TEM images. Analysis of globule size was in accordance with these results. 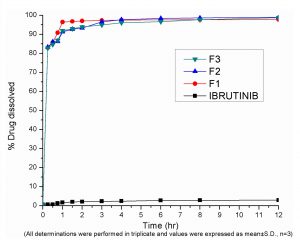 Pharmacokinetic Analysis: The retention time of ibrutinib and vortioxetine acid (Internal Standard) were found to be 4.6min and 9.7min respectively. The linearity of developed HPLC method checked by injecting seven samples of varying concentration into the HPLC. The average peak areas vs. concentrations was plotted for  linearity evaluated using calibration curve to calculate correlation coefficient, slope and intercept. The curve indicated the correlation coefficient (r2) value of 1.00 that lies within the accepted range the slope (m) of 4646. 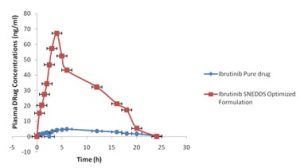 CONCLUSION: In the present study, the optimized ibrutinib SNEDDS has the composition of capryol 90, cremophore EL and transcutol HP. Based on the particle size and entrapment efficiency and in-vitro dissolution studies; F2 is identified as optimized formulation with 85% drug released, whereas less than 1% was released from pure drug at end time of 30 min. In-vivo bioavailability data reported in animals indicate higher concentration of drug in plasma implying enhanced systemic absorption of ibrutinib from SNEDDS formulation. The Cmax and AUC0-inf values of optimized SNEDDS was considerably higher (p<0.05) than pure drug formulation. The oral bioavailability of optimized SNEDDS increased around 12 folds when compared with pure drug. Therefore, from our results, the study suggests that the ibrutinib loaded formulation has a great potential for clinical application in the effective management of lymphocytic leukaemia.

ACKNOWLEDGEMENT: Authors would like to say thanks to all members who supported this work.

CONFLICTS OF INTEREST: The authors declare that the research was conducted in the absence of any commercial or financial relationships that could be construed as a potential conflicts of interest.