ABSTRACT: Highly substituted thiophene derivatives first synthesized by Gewald synthesis in 1965, are important heterocyclic compounds present in numerous biologically active compounds. The synthesis of title compounds was carried out by preparing derivatives of Gewald product. In the present study, a series of 2-aminothiophene derivatives were first prepared by Gewald reaction and further converted into 2-aminothiophene-1, 2, 4-triazole derivatives. Knoevenagel condensation of aryl ketones (1a-1d) with ethylcyanoacetate and subsequent treatment of the α-β-unsaturated nitriles (2) with sulfur and amine resulted in the corresponding 2-aminothiophenes (3a-3d), which were used as a starting material for the synthesis of substituted Gewald products. In the subsequent steps (3a-3d) were converted into carbohydrazides (4a-4d). Substituted carbohydrazides were then converted into potassium aryl carbonyl hydrazine carbodithionate (5a-5d) which were further converted into final compound 2-amino thiophene-1, 2, 4-triazole derivatives (6a-6d). The structures of all the synthesized compounds were confirmed by their spectral data (IR and 1H NMR spectroscopy).

INTRODUCTION: Heterocyclic chemistry has currently become popular and emerged as distinct field of chemistry with extensive historical background and widespread future prospective. The most primitive compounds known to mankind are of heterocyclic origin and their considerable biological importance has stimulated much work on them 1 - 4.

Traditionally, small heterocyclic molecules have been a reliable source for discovering novel biologically active molecules. Our interest in the Sulfur and nitrogen heterocycles prompted us to take up the present study.

Of all the heterocyclic compounds, thiophene derivatives have attracted considerable attention. The highly substituted thiophene derivatives are found in numerous biologically active and natural compounds 5 - 9. Further, many biologically active molecules 10 like antibacterial 11, antifungal 12, antiamoebic 13, antioxidant 14, antitumor 15, anticoagulants and antithrombotics 16 contains this S-heterocyclic core which has broadened interest in this kind of heterocycle.

1, 2, 4-triazole is another important heterocyclic compound with respect to their wide range of biological activities. Over the past few decades, the biological and pharmaceutical applications of 1, 2, 4-triazoles have fashioned substantial interest in their synthesis and characterization. 1, 2, 4-triazoles and their derivatives possess differing activities which range from antiasthmatic 21, antiviral (ribavirin) 22, antifungal (ﬂuconazole) 23, antibacterial 24, hypnotics 25 (triazolam) to anti-cancer. In this regard, we come up with the hypothesis that incorporation of 1H-1, 2, 4-triazole into the multi-substituted 2-amino thiophene unit may enhance their biological activity. This type of diheterocyclic compounds encompassing the properties of both the rings in the one structure may enhance the interaction of these molecules with the biological targets and can be exploited for their use in pharmaceutical industry. To achieve this aim, various 4-aryl substituted 2-amino thiophene derivatives were prepared by well known Gewald method as shown in Scheme 1 and then linked with 1H-1, 2, 4 -triazole as shown in Scheme 2.

RESULT AND DISCUSSION: In the present study, several aryl ketones (1a-e) were reacted with ethylcyanoacetae in benzene under a constant water separator in the presence of glacial acetic acid and catalytic amount of ammonium acetate through knoevengel condensation 26, 27. The condensation products (2a-2e) were subsequently cyclized with sulfur and diethylamine in methanol to yield 2-amino-4-arylthiophene-3-carboxylate (3a-e) as shown in Scheme 1. 2-amino-4-arylthiophene-3-carboxylate was used as a precursor to synthesize many useful compounds as shown in Scheme 2. 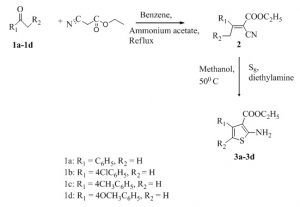 After refluxing (3a-3e) with hydrazine hydrate in ethanol, hydrazides (4a-4e) were formed. 1H NMR spectrum of (4a-4e) showed the absence of the two signals of ester moiety along with other protons at their expected locations. (5a-5e) were achieved by reacting hydrazide with carbon disulfide in ethanolic Potassium hydroxide. Signal at δ 6.7ppm for NH2 and δ 8.1ppm for NH protons were observed in 1H NMR spectrum. Moreover, hydrazine cyclizes the compounds (5a-5e) to afford 2-amino thiophene linked with 1, 2, 4-triazole (6a-6e) as shown in Scheme 2. Signal at δ 2.0ppm characteristic of NH2 at 1, 2, 4-triazole moiety was observed in 1H NMR spectra. The structure of various triazole substituted thiophenes is shown in Table 1. 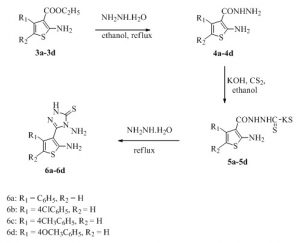 Experimental: All the chemicals used in the synthesis were of laboratory grade. The melting points were determined in open capillary method on Veego (VMP-D) electronic apparatus and are uncorrected. The IR spectra of synthesized compounds were recorded on Shimadzu 8400-S FT-IR, as well as, Perkin Elmer BX2 FT-IR Spectrophotometer in potassium bromide discs. 1H NMR spectra were recorded on a Bruker AC 400 MHz FT-NMR spectrometer using TMS (Tetramethylsilane) as an internal standard and DMSO-d6 as a solvent at SAIF, Punjab University, Chandigarh. To monitor the reactions, as well as, to establish the identity and purity of reactants and products, thin layer chromatography was performed on pre-coated silica plates (Merck Silicagel F254) using hexane-ethyl acetate-glacial acetic acid as the solvent systems and the spots were visualized by exposure to iodine vapours or under Ultraviolet (UV) light at 254nm and 360nm.

Step-I: Acetophenone (0.1mol), ethyl cyanoacetate (0.1mol), glacial acetic  acid (0.08mol), anhydrous ammonium acetate (0.02mol) and dry  benzene (50mL) were refluxed in a round bottomed flask, fitted with a Dean-Stark condenser until the total water removed in the side arm was slightly excess than the calculated value. Benzene was distilled out thereafter and reaction mixture was dissolved in dichloromethane (50mL) and given washings of aq. NaHCO3 (20ml; 10% w/v solution), aq. NaCl (20mL; 10% w/v solution) and water (20mL). The organic layer was separated, dried (Na2SO4) and dichloromethane was distilled out. The solid product alkylidene ethyl cyanoacetate (2) obtained was used as such for the second step, without purification.

Step-II: The alkylidene ethyl cyanoacetate (2) was thereafter dissolved in methanol (50ml) and sulfur (0.08mole) was added, the reaction mixture was then stirred and maintained at 50-60 °C. Then, diethylamine (0.1mol) was added dropwise over 30 min at a temperature around 60 °C. The reaction mixture was stirred further at 50 °C for 6-8 hrs and cooled overnight. The crystalline product separated was filtered, washed with 50% aq. ethanol and dried. The product, (75% yield) melting at 95-97 °C, (97-99 °C) 5, was characterized as ethyl 2-amino-4-phenylthiophene-3-carboxylate.

General Procedure: A suspension of dry compounds (3a-3e) (0.01mol), hydrazine hydrate (5mL) and absolute ethanol (30mL) was stirred under gentle reflux. The solid dissolved within 10 min with copious evolution of hydrogen sulphide to form a clear solution. After 30 min, the solid product started separating out; heating was continued for 8 hr. The reaction mixture was then allowed to cool to room temperature. The solid was filtered off, washed with ethanol, dried and crystallized from dioxane.

General Procedure: To a solution of 0.023 molcarbohydrazides (4a-4e) and 0.027 mol of potassium hydroxide, 20mL absolute ethanol and 0.034mol of carbon disulfide was added and stirred for 8-10 hours until the solution became orange colored. The obtained precipitates were filtered.

General Procedure: To a solution of 0.012 mol of potassium hydrazine carbodithionate (3a-3d) in 3mL of water, 0.024 mol hydrazine hydrate was added and the mixture was gently heated on steam bath for 1 h. After cooling the solution was quenched with 10mL water and acidified with acetic acid. The obtained solid was filtered and re-crystallized with water.

CONCLUSION: In summary, we have described a facile and practical method for the synthesis of 2-aminothiophene - 1, 2, 4-triazole analogues. The synthesized compounds are characterized by suitable analytical techniques such as IR, 1H NMR. Hence, these compounds are suitable candidates for further exploration.