ABSTRACT: A series of 2,4-diaminotriazines were synthesized as Mycobacterium tuberculosis(Mtb) dihydrofolatereductase (DHFR) inhibitors. These derivatives were evaluated in whole cells by employing resazurinmicrotitre plate assay (REMA) against MtbH37Rv. Further, these were tested against other gram positive and gram negative bacterial strains to check specificity for Mtb. Cytotoxicity assessment was performed using HepG2 cell line and the compounds were found to be non-cytotoxic. The results indicated that some of the derivatives exhibited promising activity. The most active compound in the REMA assay was selected for DHFR enzyme assay against both the Mtb and human enzymes. The enzyme assay results indicated that this derivative exhibited selectivity towards the pathogenic enzyme. The most active compound in the whole cell assay against MtbH37Rv showed low cytotoxicity, was specific towards Mtb and displayed selectivity in the DHFR enzyme assay. Thus this study provides promising insight for design of potent and selective Mtb DHFR inhibitors

INTRODUCTION: Folate pathway is an attractive and widely explored target for chemotherapy of various bacterial and protozoal infections, along with cancer. It is vital for nucleic acid biosynthesis and therefore DNA formation, and cell replication. 1 The differences in the enzymatic constitution of the microorganisms and mammals provide the basis for design of selective inhibitors with low toxicity to human cells. 2

dihydrofolatereductase (DHFR) is a crucial enzyme in the folate pathway that links folate synthesis to the production of Tetrahydrofolate (THF). DHFR inhibition directly halts cellular replication by starving the cell of crucial cellular precursors. 3, 4 DHFR is found in many pathogenic microorganisms including Mycobacterium tuberculosis (Mtb). However, it remains relatively unexplored in Mtb, an obligate pathogen. World Health Organization has estimated 6.1 million cases of tuberculosis in the year 2014.5 A rigid cell wall barrier and the ability to remain dormant are major hurdles in the treatment of TB. Issues such as subclinical persistence and development of resistance emphasize the need for new molecules which could act via unique mechanisms and therefore show minimum cross resistance with existing drugs.

Various nitrogen heterocycles, 6-8 boron containing carboranes 9 and a tripeptide compound have been reported as Mtb DHFR inhibitors.10 Our research group has been actively involved in the synthesis of several novel, diverse inhibitors of DHFR for Mtb 11, 12 and opportunistic pathogens, 13-15 including Mycobacterium avium. 16, 17Additionally, we have isolated Mtb DHFR enzyme from recombinant Saccharomycescerevisiae strains and purified it using a novel affinity column.18, 19

In our earlier efforts to identify Mtb DHFR inhibitors, various diaminotriazines had been synthesized providing valuable insights for design of new derivatives. The current work deals with identification of key features necessary for binding to the active site of DHFR, using the interactions of known inhibitors and alignment of our earlier developed analogues. On the basis of these molecular modeling studies, we report a series of diaminotriazines as Mtb DHFR inhibitors. These derivatives were evaluated for whole cell Mtb inhibition. Cytotoxicity assessment was carried out to evaluate their toxicity using HepG2 cell lines. The molecules were also tested against other bacterial strains to assess selectivity towards Mtb. The most active derivative was further evaluated for inhibition of Mtb and human DHFR in an enzyme assay. 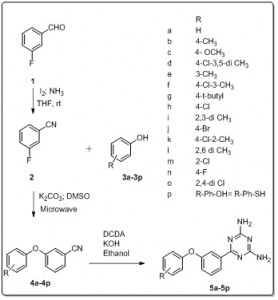 Conversion of 3-fluorobenzaldehyde to its corresponding nitrile was carried out using iodine in ammonia water. Various phenols were condensed with this 3-fluorobenzonitrile in DMSO with K2CO3 as base using microwave irradiation giving intermediates 4a-4p. These intermediates were reacted with dicyandiamide in ethanol using KOH as a base to give corresponding triazine derivatives. 21

The synthesized derivatives were tested for their anti-tuberculosis activity against Mycobacterium tuberculosis H37Rv using two fold dilution technique of the resazurinmicrotitre assay (REMA). 22, 23 DHFR enzyme is present in both pathogens as well as humans. Hence to assess the cytotoxicity of these derivatives in the host, the compounds were tested using HepG2 cell lines (Table 1). 24 Additionally whole cell assay was carried out against S. aureus and E. coli as representatives of gram positive and gram negative organisms to determine selectivity towards the Mtb.

DHFR enzyme assay was carried out for the most active derivative in the whole cell assay. 25, 26 Enzyme activity was determined spectrophotometrically by monitoring the decreasing absorbance for two min at 340 nm and 37oC.  Standard assay mixture (1.0 mL) contained 50 mM potassium phosphate (pH 7.4), 5 mM DTT, and 60 µM NADPH and the reaction was started after 3 min of incubation by the addition of 45 µM DHF. A unit of the enzyme activity is deﬁned as the amount of the enzyme converting 1.0 µmol of DHF and NADPH to THF and NADP+ per min. This is calculated from the change in absorbance at 340 nm under specified assay condition.

RESULTS AND DISCUSSION: Docking study of MTX and TMP revealed necessary interactions such as hydrogen bonding interaction with Ile94, Ile5 and Asp27 along with presence of a tertiary nitrogen containing heterocycle (Fig. 1a). Simultaneously, in the alignment studies of the earlier reported derivatives it was observed that the phenyl ring directly attached to the triazine ring shows a good overlap as seen in Fig. 1b. 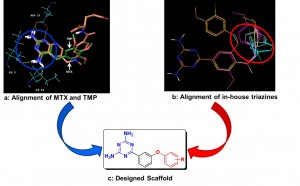 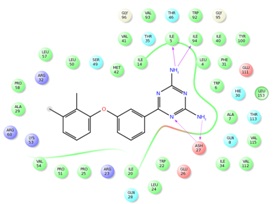 FIG. 2: LIGAND INTERACTION DIAGRAM OF A REPRESENTATIVE DERIVATIVE 5i.

MTX is a very potent DHFR inhibitor but is non-selective towards the pathogenic enzyme and therefore is not used in anti-infective therapy. Hence, the potency and selectivity of the most active derivative 5h by was assessed testing against both Mtb and human DHFR. The enzyme assay 23, 24 revealed that 5h showed IC50 values of 70 ± 0.011µM and 153 ± 0.042µM against Mtb and human DHFR respectively, indicating around two fold selectivity towards the pathogenic enzyme, in contrast to the IC50values for MTX which were 0.00825 ±0.00025µM and 0.0016 ± 0.0003µM against the pathogen and host enzymes respectively with a selectivity of 0.194. The derivative 5h is less active than MTX but is 10 times more selective thus providing promising insight for design of selective, potent Mtb DHFR inhibitors.

CONCLUSION: To summarize, molecular modelling was used to design diaminotriazines as Mtb DHFR inhibitors. Some compounds showed promising whole cell activity against MtbH37Rv amongst which derivative 5h was of particular note. It was also found to be non-toxic and specific towards Mtb. The enzyme assay results of 5h indicated that it was 10 times more selective than

MTX. Thus, taking in to account our preliminary biological results, our efforts are now focused on developing promising Mtb DHFR inhibitors along with series expansion.