ABSTRACT: The objective of the present study was to develop and characterize the fast disintegrating tablets, which rapidly disintegrates in the sublingual area without the need of water or with a little amount of water. Amlodipine besylate is a calcium channel blocker (long-acting) basically used in the treatment of angina and hypertension for immediate relief in life-threatening conditions. In this work, we prepared the fast disintegrating tablet of Amlodipine besylate for the increasing rate of dissolution using two different classes of super-disintegrating agents naturals are (Locust bean gum; Plantago ovata) and synthetic are (Croscarmellose sodium, Crospovidone). The method of preparation was direct compression. The pre-formulation studies were also performed. The tablets were prepared and evaluated according to the parameters in the pharmacopeia. Results revealed that fast disintegrating tablets prepared with Locust bean have the highest drug release (in-vitro) of 98% within 30 min. The use of Locust bean as super disintegrant has majorly promoted the rapid release of the active drug. This study gives knowledge about the pivotal fundaments related to the formulation of Amlodipine besylate.

INTRODUCTION: Tablets that are quickly dissolved or disintegrate into the oral fissure have enticed a great deal of attention, and these tablets useful for those patients who have difficulty in swallowing and also useful for active people 1. The oral route remains most popular owing to the ease of administration, manufacturing, and regulatory strategy.

From the ancient time, we have seen that tablet and capsule capture a major portion of drug delivery system, but many patients like an elder person, children, mentally unstable, uncooperative and nauseated or on reduced liquid-intake/diets have swallowing difficulty, so that type of fast disintegrating tablet is best suited for them 2.

Those who are traveling or have little access to water are similarly affected. To get the better result for these types of weaknesses, researchers have developed a pioneer drug delivery system is known as fast-dissolving “melt in the mouth” or mouth dissolve tablet. These are a novel type of tablet that disintegrates dissolve / disperse in saliva 3, 4. Different type of novel and conventional techniques for fast disintergarting tablets was shown in Fig. 1. 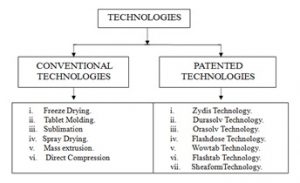 Superdisintegrants: Disintegrates are those substances which often used in the formulation of tablets and capsules and promoted penetration of water in a dosage form, which leads to dispersion of the lining of the dosage form in the dissolution medium. Typically concentration of the super-disintegrants used as 1-10% by the total weight of the dosage unit. Usually, super-disintegrants are used like Croscarmellose sodium (AC-Di-Sol), Crospovidone (CP), Sodium starch glycolate (SSG), etc. The selection of excipient depended upon the optimized design of a fast disintegrating tablet. Superdisintegrants not only break the tablet into granules but also disrupt the powder particle from which the granules were formed 5. The Super-disintegrants are classified as two categories according to their availability

Synthetic Superdisintegrants: These agents are used in fast dispersible tablet because tablet shows excellent disintegration, wetting, and other parameters. These are productive in minor concentrations 6.

Natural Superdisintegrans: These agents are naturally occurring sources and are preferred over synthetic substances because they are relatively cheaper, copiously available, non-irritating, and benign in nature 7.

Mechanism of Action of Disintegrating Agents: Mechanism suggested for the action of disintegrating agents was including wicking of water, swelling, deformation recovery repulsion, and heat of wetting. There were no single mechanisms that explain their behavior. However, each of these proposed mechanisms provides some understanding of different aspects of disintegrants action 8.

Solubility Analysis: Solubility analysis was done to select a suitable solvents system to dissolve the drug, and mechanical shaker is used for the estimation of solubility 10.

Determination of Λmax and Preparation of Calibration Curve of Amlodipine Besylate: 100 mg of drug was weighed and then transferred into the 100 ml phosphate buffer of PH range (6.8) in a volumetric flask and then make the dilution after that taken 10ml solution from it. It gives 100 mcg/ml (stock solution). Again 10 ml from this solution withdrawn and diluted to 100 ml with phosphate buffer, and absorbance is taken between 400 nm- 200 nm 11.

Drug Excipients Interaction Studies: IR spectra gave a detailed study of the structure of a compound. Unlike the UV spectrum, which comprises relatively few peaks, this technique provides a spectrum containing a large number of absorption bands from which structural information is disclosed. FTIR spectrometer (FTIR-8400S spectrophotometer, Shimadzu, Japan) used for testing the pure drug sample. The sample was ground thoroughly with KBr powder in mortar and pestle, in a weight ratio of 1:100 and then pressed the mixture in dies set in pellet press under a hydraulic pressure of 15 tons for a minute.

Release the pressure by rotating the side valve in an anticlockwise direction to take of the pellet from the dies set. Then, the pellet was placed in the sample holder, and spectral scanning was taken in the wavelength region between 400 and 2000 cm-1 at a resolution of 2 cm-1 and a scan speed of 2 mm/sec 12.

Methods of Preparation of Fast Disintegrating Tablets: The direct compression method was used for developing fast disintegrating tablet of Amlodipine besylate as the formula given in Table 1. Each excipient was passed through 60 mesh sieve. The drug and microcrystalline cellulose were put together in a small portion and then blended it to get a uniform mixture kept aside.

Then the ingredients were weighed and mixed in congruous order. At last, the magnesium stearate (lubricant) is added to lubrication step and finally tablets were compressed of 6 mm sizes flat round punch to get tablet using Multi Station rotary punch tablet compression machine (Proton Minipress) 13.

Weight Variation: 20 tablets were taken randomly from each formulation and then weighted separately on digital balance, and after that average weight was taken that 20 tablets and then determine the weight variation of each tablet using formula 14.

Friability Test: Roche Friabilator is used for the determination of the friability test. Tablets that are equivalent to 6.5 g were placed in the friability chamber and rotated that at a speed of 25 ± 1 rpm for 4 min equal to 100 rotations. Dropping height should be 6 inches on each rotation. The friability each batch was determined calculated using the following formula 15:

Drug Content: 10 tablets weighted and minced in a mortar to get powder then weighed powder 10 mg equivalent to ABD and then dissolved in 100 ml methanol, from this solution 1 ml of solution was diluted to 10 ml methanol again 1 ml solution from this diluted up to 10 ml with methanol and assayed for drug content at 239 nm 16.

Wetting Time: For determination of wetting time, we took a piece of tissue paper folded twice, and then the paper was placed into a small petridish containing 10 ml of water, a tablet was placed on the paper, and the time for complete wetting was measured.

Wetting is closely related to the inner structure of tablets and the hydrophilicity of excipients, and this may be due to the ability of swelling and also the capacity of absorption of water due to super disintegrant present in formulation 17.

λmax is an important feature in drug development. It is determined by the spectrophotometric method in the phosphate buffer pH 6.8, acetate buffer pH 4.5, and 0.1 N HCL solvents with the help of UV 1800, Shimadzu Corporation. Japan. Scanning was done between 400 nm to 200 nm, and λmax was found to be 239 nm.

Formulation Parameters: The tablets are randomly taken from each batch and examined for shape and color visually. The tablets are flat, circular shape in white color. All ingredients used were white in color. The values are almost uniform in all formulations. Thickness was found in the range from 2.9 mm to 3.1 mm respectively. All the tablets passed weight variation test as the % weight variation was within the pharmacopeias limits of + 10%. It was adjusted and maintained 99.0 to 102.0 mg. The weight of all the tablets was found to be uniform. This is due to good flow property and compressibility of all the formulations. Each formulation was analyzed spectrophotometrically. The % drug content of the tablet was found between 96 to 98%. The results indicated that in all the formulations, the drug content was uniform. LBG absorbs water rapidly in the formulations and shows fast wetting time because the tablet formed by LBG was porous in nature. This parameter simulates disintegration time in the oral cavity as the tablet is kept motionless on the tongue; hence correlation between wetting time and disintegration time in the oral cavity can also be made. Tablet parameter like weight variation, hardness, friability, content uniformity, wetting time, and in vitro D.T result was compiled in Table 3. As shown in the table the DT decreases with an increase in the level of CP, CCS, LBG, PO as super disintegrant concentration goes to 8 and 10% in the tablets.

Dissolution Profile: The in-vitro drug release was performed on all the formulations using USP type-II dissolution apparatus in 900 ml of phosphate buffer pH 6.8 to simulate the conditions of oral cavity. The temperature of dissolution medium was maintained at 37 ± 0.5 ºC, and RPM of apparatus was set at 50; aliquot from dissolution medium was withdrawn at every 5 min. interval and filtered using Whatman filter paper. The absorbance of the filtered solution UV spectrophotometer at 239 nm and the concentration were determined.

The graph between % CPDR v/s time for all formulations was estimated in Fig. 5.

Optimization Studies: The optimization studies were done on the basis of disintegration time, in-vitro drug release, and drug content.

The release of batch F6 was carried out in phosphate buffer. This buffer simulates the condition of the oral cavity, which has pH 6.8. The result shows that the tablet of the formulation F6 releases more than 85% of the drug within 5 min and 98% of the drug is found to be released within 30 m and it result was shown as a graph in Fig. 6 and the parameters are shown in Table 4.

Stability Studies: The stability of optimized formulation was tested according to the international conference on harmonization guidelines for Zone III and IV. The formulation was stored at accelerated (40 ± 2 ºC / 75% ± 5% RH) condition wrapped in aluminum foils and kept in at the humidity chamber.

The stability studies were conducted after 30 days. At the end of the month, tablet were tested for physical appearance, weight change, hardness, DT time, drug content, and drug release. The result of the stability study was shown in Table 5.

CONCLUSION: Preformulation studies of Amlodipine besylate were performed; the FTIR analysis revealed that superdisintegrants and excipients used were compatible with Amlodipine Besylate. Fast disintegrating tablets of Amlodipine besylate were prepared by direct compression technique using two different classes of super-disintegrants, i.e., Naturals class (LBG, PO) and synthetic class (CCS, CP). Overall formulation F6 containing Locust bean gum at 10% disintegrated rapidly to release the drug. The formulations F6 were selected for stability studies on the basis of their better and satisfactory evaluation studies parameter. These formulations showed not much variation in any parameter even after the period of 30 days. From the result, it was concluded that formulation F6 are found to be stable and retained their original properties.

The formulation F6 showed more than 80% of drug release within 5 min and almost 98% of the drug release in 30 min.

The excellent in-vitro release profile is probably the solubility enhancement properties of LBG. At a stable hardness of tableting, the disintegration time is measured, it is found that the batch F6 shows minimum DT time, this is attributes to LBG capacity of depicting Swelling and Wicking both mechanism simultaneously.

ACKNOWLEDGEMENT: I am extremely thankful and express my sincere gratitude to IPCA Laboratories Ltd. Ghaziabad for providing gift sample.

CONFLICTS OF INTEREST: There is an absence of any conflict of interest. We authors, the undersigned research article entitled “design, development and characterization of fast disintegrating tablet of amlodipine besylate by using superdisintegrants Plantago ovata and locust bean gum” submitting the article.