DESIGN, DEVELOPMENT AND EVALUATION OF A NEW POLYHERBAL MOUTH WASH FOR ANTIBACTERIAL POTENCY AGAINST ORAL BACTERIA

DESIGN, DEVELOPMENT AND EVALUATION OF A NEW POLYHERBAL MOUTH WASH FOR ANTIBACTERIAL POTENCY AGAINST ORAL BACTERIA

ABSTRACT: A new Polyherbal Mouth Rinse was formulated comprising of polyherbal extracts of grapes peel, neem, clove, fennel and ginger based on their traditional applications. The extracts used in the formulation and polyherbal mouth rinse both were subjected for anti-bacterial activity separately. Phytochemical tests and spectral studies of the extracts have indicated the presence of polyphenolic compounds- mainly trans-resveratrol and the UV-Vis spectrum also shown the presence of trans-resveratrol at 260 nm. This compound is reported to have wide applications. Both the extracts and polyherbal mouth rinse have shown good sensitivity towards microorganisms like S. aureus, S. mutans and E. fecalis. These study results shows that the presence of compounds like glycosides, terpenoids, flavanoids and saponins which may be responsible for the antibacterial efficacy of the extracts and polyherbal mouth rinse against the these microorganisms which are mostly found responsible for bacterial infections in oral cavity. However further study is needed to confirm this.

INTRODUCTION: Mouthwash / rinse is a chemotherapeutic agent used as an effective home care system by the patients to enhance oral hygiene. Some manufacturers of mouthwash claim that antiseptic and anti-plaque mouth rinse kill the bacterial plaque which causes cavities, gingivitis and bad breath. Anti-cavity mouth rinse uses fluoride to protect against tooth decay. It is however, generally agreed that the use of mouthwash does not eliminate the need for brushing and flossing 1, 2. As per the American Dental Association, regular brushing and proper flossing are essential in most cases although the ADA has placed its Seal of Approval on many mouthwashes containing alcohol.

Mouth rinse with alcohol as a base is prone for addiction for people consuming alcohol regularly. Excessive use of such mouth rinse regularly may cause harmful effect on the internal organs like lungs, kidneys, intestines and in certain cases the brain may also get affected 3, 4.

India is a country which has rich traditional medicine system dating back to more than a three thousand years and perhaps combinations of herbs must have been known since then, but now  people have all along been using synthetic medicines,  the significance of age old system of medicine has been forgotten. Studying the above mentioned drawbacks of the commercial mouthwash, people are now more aware and inclined towards the use of non-alcoholic or herbal mouthwash formulations. Herbal mouthwash / mouth rinse is formulated by using the active constituents obtained from plant sources directly by the process of extraction and evaporation. Traditionally used plant based medicines for dental problems include fennel, clove, grapes peel (red grapes), myrrh, neem etc. From ancient era, clove is used in India and China to cure tooth aches. It is highly beneficial in reducing the tooth pain. Due to its antiseptic properties, it also guards the teeth from infections. Clove oil is applied on the gums or the bud is placed between teeth to reduce pain caused by tooth decay. Grape peel has been noticed in various studies conducted on the peel of red / black grapes that it consist of an anticancerous phytoconstituent called ‘trans-reservetrol’ which is a polyphenolic compound. After various applications the cytotoxic inhibition effect for purified reservetrol extract revealed its highest significance. Myrrh was very popular in the ancient world and was used as a medicine by the Chinese.

It is very good for mouth and gum disorders, such as mouth ulcers, pyorrhea (pyorrhea), gingivitis, spongy gums and sore throats which consist of oleo-gum-resin. Since time immemorial neem has been used as a medicine for its various therapeutic properties. Neem twigs are used for chewing and its leaves are known for their antibacterial property. Leaves are also used to treat infections in the eye and ear. Neem aqueous extract is known for its chemotherapeutic effect and as an antiviral agent. Peppermint makes great-tasting candies and herbal teas. It also makes a great-tasting mouthwash. In addition, peppermint has astringent properties, it not only freshens the breath, but also can help to wash away the germs that too often hide in the mouth and between the teeth, which can cause gum and mouth problems.

The composition of water varies widely with local geological conditions. Neither groundwater nor surface water has ever been chemically pure water, since water contains small amounts of gases, minerals and organic matter of natural origin. Artificially produced demineralized waters, distilled water and also deionized or reverse osmosis-treated water, had been used mainly for industrial and laboratory purposes. This is also used in mouthwash preparations to clean the oral cavity 5, 6, 7, 8, 9.

Based on the above information in the present study an attempt is made to formulate a poly-herbal mouthwash based on the traditional knowledge which will be devoid of the above mentioned side effects of alcohol and effective against selected bacteria by studying its antibacterial potency which may reported to be present in the oral cavity and may lead to dental infections.

Objective: To formulate a new polyherbal mouthwash and evaluate its antibacterial potency

MATERIALS AND METHODS: Grapes peel, fennel, clove, neem, myrrh were purchased from the local market and these specimens were authenticated by Dr. Harsha Hegde, scientist RMRC, Belgaum. The specimen numbers were given as following:

Extraction: Shade drying of the seeds was done for almost a month as to avoid chemical degradation due to sunlight. Grinding of the dried seeds was done, with the aid of a grinder and converted into coarse powder to the size- 0.1 micron. The crude powder   was defatted with pet ether (400-600) and then the defatted material was subjected to extraction with hydroalcol using a Soxhlet apparatus. The extract was concentrated with the help of a rotavapour (BUCHI). The excess solvent present was evaporated.

Formulation: 10, 11, 12 Based on the sensitivity and the resistance observed by MIC and Zone of Inhibition the formulation was prepared by using the standard formula.

Spectral analysis: 12 UV-Vis spectral fingerprints have been made on red grape peel extract in the lab using UV-Vis spectrophotometer (SHIMADZU) in the wavelength range of 200-400 nm. Dilutions were prepared from the extract (1mg/ml) and the dilutions was analysed.

Antimicrobial Studies of the Extracts: 14, 15

2. Temperature: Bring agar plates to room temperature before use.

5. Addition of Compound into Plate:

Phytochemical Study Results: The phytochemical study results of the extarcts and polyherbal formulation have shown positive results for polyphenolic compounds. The results have shown the presence of phytoconstituents such as flavonoids, glycosides, alkaloids, proteins, etc. Table 1. 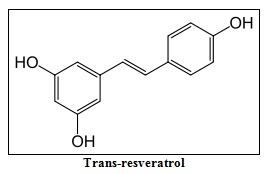 Determination of Anti-bacterial Activity of the Extracts: Antibacterial potency against S. aureus, E. faecalis and S. mutans by the standard method using Ciprofloxacin as a standard drug was carried out.

Anti-Bacterial Study: Details of the strain number of the bacteria used are

The values of MIC for the standard for disc diffusion method are as follows:-

The antibacterial study for the extracts and polyherbal mouthwash was also carried out as per the above procedure and the results of the study along with the zone of inhibition were recorded Table 2 and 3.

DISCUSSION: The extracts of neem, grapes peel, fennel, myrrh along with polyherbal mouth wash were subjected to phytochemical study Table 1 and spectral study using UV-Vis spectral analysis Fig. 4. The phytochemical analysis has shown the presence of various phytoconstituents in the extracts and all of them in polyherbal mouth wash which gives us information that the reported phytoconstituents such as alkaloids, flavonoids, glycosides, steroids etc. were present in their corresponding extracts and all of them are present in the polyherbal formulation successfully. Hence these phytoconstituents such as azardichtin, t-resvetrol and eugenol which are the main active constituents of neem, grape peel and clove respectively were responsible for the antibacterial efficacy of the polyherbal formulation 20. The absence of alcohol is an important factor which avoids the risk of ‘habit forming in some people who are already addicted to alcohol, although the presence of alcohol may improve the antimicrobial Table 2 and 3.

The spectral analysis of the grapes peel extract which was the chief constituent of the polyherbal mouthwash has shown the presence of trans-resveratrol at 270-280 nm in UV-VIS spectrum Fig 5. This has confirmed the presence of it in the extract which will be carried to the mouthwash and make it more powerful antibacterial and probably anticancerous home remedy for the tobacco chewers Fig. 4.

Further, the extracts developed good sensitivity towards the microorganisms, S. aureus, S. mutans and E. fecalis for different dilutions. The zone of inhibition was observed to be 8 mm, 9 mm, 12 mm, 13 mm and 14 mm for dilutions 75 mg/ml, 50 mg/ml and 25 mg/ml respectively.

This shows that the microorganisms are highly sensitive to the extracts only at higher dilutions as compared with the standard drug Ciprofloxacin. The diffusion tube with minimum turbidity showed maximum sensitivity. However, since this polyherbal mouthwash is prepared from indigenous plants, it is more safer than the other commercial mouthwashes Fig. 1-3. 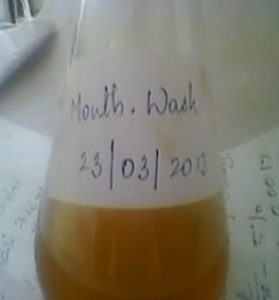 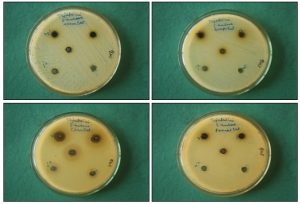 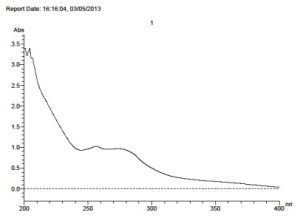 CONCLUSION: A study effort has been made to combine the active constituents of different extracts to make an effective polyherbal mouthwash formulation which is free from alcohol. For the present study neem, fennel, grape peels and clove extracts have been used for their reported activities including anti-bacterial activity. Hence, these extracts were tested along with the polyherbal mouthwash for anti-bacterial activity and anti-biotic activity. The phytochemical tests and spectral analysis have confirmed the presence of various phytoconstituents in the extracts and formulation, which makes the formulation more efficacious. The presence of trans-resveratrol (grapes peel extract) in this formulation is an added advantage for the formulation since it is known for antioxidant and anti-cancerous potency. Hence this polyherbal mouthwash is useful as a home remedy for the tobacco chewing patients who have both dental infections and patches which may lead to oral cancer. However, further study need to be done to justify this by the polyherbal mouth rinse.

ACKNOWLEDGEMENT: We thank VGST-SPICE, Department of S & T, Government of Karnataka for their financial support to this research work. We also thank the Principal, KLES’s College of Pharmacy Belgaum for providing us necessary support for the research work.

CONFLICT OF INTEREST: Authors are thankful to department of S & T and BT, GoK, VGST-SPICE, Bangalore for the financial support to the project.