A Sustained release tablet formulation should ideally have a proper release profile that is usually encountered in manufacturing. The objective of the present investigation was to develop the sustained release matrix tablet of Boswellia serrata, Moringa oleifera and Vitex negundo using the combination of hydrophilic and hydrophobic polymers.Tablet formulations were developed using wet granulation method. Ethanolic extracts of Boswellia serrata, Moringa oleifera and Vitex negundo were used. Addition of different diluents like talc , magnesium stearate and microcrystalline cellulose were used for improving flow ability and compressibility. The tablets were subjected to physicochemical  characterization, in vitro drug release and stability studies. The physicochemical properties were found within limits. The % drug release after 12 hours  for formulation F-1, F-2, F-3 was found to be 97.32, 90.12,  and 73.85 respectively. The presence of Ethyl cellulose as well as HPMC as the total matrix material significantly influenced the release rate of  the drug. Based on dissolution studies all the formulations showed sustained release of drugs from the formulations.

INTRODUCTION: Inflammation and rheumatism remain serious problems in the present era. Inflammation is a key feature in autoimmune disease. Inflammation occurs as the immune system reacts to injury, infection, environmental agents, malignancy, and cellular changes. Any assault to living tissue, whether due to physical , chemical or microbiological origin results in inflammation, manifests by redness, heat, pain, swelling and loss of function.

A large proportion of the Indian population for their physical and psychological health needs depend on traditional, system of medicine. Medicinal plants have become the focus of intense study in term of conservation as to whether their traditional uses are supported by actual pharmacological effects or merely based on folklore.

Ayurvedic or homeopathic system of medicine claim that no side effects are generally observed on prolong use of herbal drugs.

The anti-inflammatory activity of plants Boswellia serrata, Moringa oleifera and Vitex negundo is reported in the literature 6, 7, 10, 11, 12.

The successful treatment of inflammation depends on the maintenance of effective drug concentration level in the body for which a constant and uniform supply of drug  is desired .

Sustained release dosage forms deliver the drug at a slow release rate over an extended period of time and achieve this objective. For sustained release system, the oral route of drug administration has by far received the most attention as complicated, convenient and safer route 13, 14.

Hence in this study, an attempt was made to develop  & evaluate safe and effective anti-inflammatory herbal matrix tablet containing Boswellia serrata, Moringa oleifera and Vitex negundo extracts by using combination of hydrophobic and hydrophilic polymers.

The extracts were concentrated under reduced pressure.

Preparation of tablets: Number of studies shows the use of hydrophilic matrices to formulate the sustained release dosage forms of different drugs 15, 16.

A rapid rate of hydration of matrixing agent is necessary. A slow polymer hydration rate may be lead to dose dumping due to quick penetration  of dissolution fluid in the tablet core. Hence a rapidly hydrating matrixing agent , HPMC K4M, HPMC K-15M, and  HPMC-100M selected in the present study provide pH dependent drug release to oral dosage forms that can be used for formulating the sustained release dosage forms 17, 18, 19, 30.

However, the use of hydrophilic polymer alone for controlling the drug release of highly water soluble drugs is restricted due to rapid diffusion of the dissolved drug through the hydrophilic gel layer 18, 19.

Use of hydrophobic polymers will retard the drug release. So, in the present investigation, an attempt had been made to formulate the sustained release matrix tablets of the mentioned herbal drug combination using hydrophilic matrix material (HPMC K4M, HPMC K-15M, and HPMC- 100M) in combination with hydrophobic ethyl cellulose 35-40.

The compositions of the tablet formulations are given in Table 1.

The  accurately weighed quantity of extract,  polymer and other materials were passed through 60# sieve. Then mix  drug and  HPMC to obtain a uniform mixture.

This mixture is  then granulated using weighed quantity of Ethyl Cellulose in iso- propyl alcohol and mix properly to obtain a  dough.

The wet mass was passed through 8# sieve. Granules were dried  in oven at 50+5°C  for one hour and dried granules were passed through 20# sieve and were retained on 40# sieve , and 10% fines were added to these granules. Then these granules were lubricated in poly bag using talc and magnesium stearate. Weighed quantity of blend was fed  to the hopper of compression machine. The granules compressed by  using flat faced punch i.e., upper punch with break line and lower punch is plane of diameter 10 mm.

Evaluation of granules 20, 23, 26: The granules containing above mentioned extracts prepared by wet granulatiuon method were evaluated for loose density, tapped  bulk density, angle of repose and % compressibility index as mentioned in Table 2.

The (%) friability of the tablets (n=6) was determined using Roche friabilator. Weight variation test of the tablets (n=20) was carried out as per the official method (I.P. 1996). The results are shown in Table 3.

In- vitro Dissolution Studies 25, 26: The in vitro release of total flavonoid from formulation batches was carried out in 0.1N HCl for 2 hours and continued in pH 6.8 phosphate buffer for remaining 10 hours. The studies were performed in USP dissolution apparatus II at 37±0.5 °C and 50 rpm. Samples were taken at interval of one hour each and analyzed for drug content at 415nm and replaced with same quantity of dissolution medium as it had withdrawn.

Flavonoid content can be taken as the reliable and reproducible parameter for the dissolution studies of the formulation. So with respect to total flavonoid content present in extract, the drug release study was carried out.

The % drug releases of formulation batches containing HPMC and ethyl cellulose in 0.1N HCl for 2 hours and pH 6.8 phosphate buffer for remaining 10 hours are shown in Table 4 and Fig. 1. 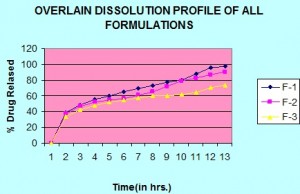 The release profiles of optimized formulations after stability studies for 3 months are shown in Fig. 2. 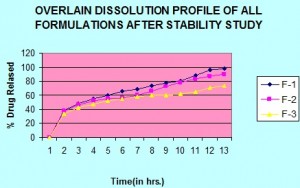 FIG. 2: IN VITRO RELEASE PROFILE OF OPTIMIZED FORMULATIONS AFTER STABILITY STUDIES  FOR 3 MONTHS

RESULTS AND DISCUSSION: Herbal drugs now a days are receiving attention in finding the new source of promising drugs for the treatment and cure of various ailments.

The present research work is an attempt to design, develop and evaluate a stable Matrix Tablet of Boswellia serrata, Moringa oleifera, and Vitex negundo.

Evaluation parameters for tablets like thickness, hardness, friability and disintegration of all formulations were found to be within pharmacopoeial limits.

The tablets passed the weight variation test as per I.P.  The hardness of matrix tablets was found to be in the range of 4.68 to 5.82 Kg/cm2.Friability values were found to be within acceptable limits. The friability values ranged from 0.15 to 0.18%.

From the results of physical evaluations, formulations were found to be stable and effective.

For the drug release in vitro dissolution studies had been performed as per method of USP. The in vitro release of total flavonoid  was carried out for each batch for 12 hours.

Table 4 and Fig. 1 shows the effect of different polymers on % drug release.

In the in vitro dissolution studies of matrix tablet  Formulation F-1, containing HPMC-K4M along with  Ethyl cellulose, it was observed that tablets were eroded and were able to form gelatinous layer around the tablet core and the drug release was found to be 69.19 % within 6 hours of dissolution study.

Drug release was decreased in Formulation F-2,  containing HPMC-K15 M alongwith  Ethylcellulose .The drug release was found to be 60.45% in the first 6 hours of the dissolution study.

In formulation F-3, containing HPMC-K100M along with Ethyl cellulose, drug release was found to be 57.78% in the first 6 hours of the dissolution study.

This release pattern  may be due to a more rigid complex formed by hydrophilic polymer HPMC in presence of hydrophobic polymer Ethyl cellulose, which helped in retaining the drug in the matrix and did not allow rapid diffusion of soluble drug from the matrix.

The hydrophobic nature of Ethyl cellulose seems to have contributed towards reduction in the penetration of the solvent molecules into the matrix 32, 33, 34, 35, 36, 39.

Overall it can be concluded that, the presence of Ethyl cellulose as well as HPMC as the total matrix material significantly influenced the release rate of  the drug.

From results of stability studies, no significant change in in vitro dissolution profile and physical parameters was observed. Hence, the optimized formulations seem to be stable.

Based on above studies it can be concluded that developed matrix formulation can serve as a successful sustained drug delivery system.

ACKNOWLEDGEMENT: The authors are thankful to the Principal, Govt. college of Pharmacy, for providing necessary facilities to complete this research work.