ABSTRACT:  In this investigation, Miconazole Nitrate topical gels were designed by employing various bioadhesive polymers like polyacrylates (carbopol 940), cellulose derivatives (hydroxyl propyl methyl cellulose and sodium carboxy methyl cellulose) and natural polymers (sodium alginate) alone and in combination. The prepared gels were also characterized for different parameters like visual appearance, pH, consistency, rheological studies, drug content, in vitro release studies, stability studies and antifungal activity. From the results it was found that all the formulations were free of gritty particles and were found to be uniform in consistency. The values of pH were within the range of the skin pH that is in between 5.9 and 6.8, which indicates these gels cannot cause any local irritation to the skin surface. The consistencies of the gels were found to be excellent. The viscosity values of the gel increased in the following manner: carbopol and HPMC >carbopol>carbopol and SCMC >carbopol and sodium alginate > Sodium alginate >SCMC: indicating that carbopol in combination with HPMC was found to be the most viscous gel when compared to the others. The drug content was found to be uniform among various batches prepared and were in the range from 98.78±0.14 to 99.88±0.1%. The release of drug from all the formulations at the end of 8 hours study ranged from 68.78±0.42 to 99.88±0.05%. Gels containing carbopol 940 and HPMC and carbopol 940 alone released the drug at a sustained manner when compared to the gels containing SCMC and sodium alginate alone which released at a faster rate within 8 hours. The antifungal assay  revealed that the gels containing carbopol 940 and HPMC in combination and carbopol 940 alone showed the maximum zone of inhibition values of  about 15mm and 14mm respectively upto 72 hours. They possessed the maximum antifungal activity. The stability studies revealed good physical stability for all formulated preparations.

INTRODUCTION: Drug administration through topical is a localized system of delivery of drug anywhere in the body through ophthalmic, rectal, vaginal and the skin as topical routes. Skin is one of the most readily accessible organs on the human body for topical administration and is the main route of topical drug delivery.1

Gels which are made with water are termed as hydrogels while that with an organic liquid are termed as organogels. Hydrogels include the composition of water- soluble materials such as cellulose derivatives and natural gums.

These pseudohydrogels swell to a great extent and the consitutuent molecules dissolve from the surface of the matrix. Drug molecules tend to release through the spaces in the network and also by degradation as well as dissolution of the matrix. Miconazole Nitrate, an antifungal agent is often prescribed for the treatment of various topical fungal infections such as Candidiasis, Coccidio idomycosis, Crypto coccosis, Para coccidio idomycosis, and infections due to Pseudeli escheria. The drug undergoes substantial first pass metabolism and only half the amount of it is bioavailable systemically. To avoid this, delivery of Miconazole Nitrate through skin delivers the potential advantage of bypassing the hepato-gastro first pass metabolism associated with oral administration.2

Although the gel formulation of Miconazole Nitrate seems to be highly useful, there is a lack of literature on the present work. Therefore in this present work it was planned to formulate and evaluate Miconazole Nitrate gels Using various bioadhesive polymers such as cellulose derivatives, sodium alginate and polyacrylates.

Gels were formulated by cold mechanical method described by Schmolka et al. (1972) 7, 8. Stated quantity of polymers (carbopol 940, HPMC, SCMC and sodium alginate) were weighed and was sprinkled on the surface of purified water for 2 hrs. Then continuous stirring was done with the help of a mechanical stirrer so that the polymer gets completely soaked in water. With incessant stirring, triethanolamine was added which acts as a neutralizer to maintain the pH of the gel.

Then the required amount of propylene glycol was added to the gel, which amplifies the penetration, followed by the addition of required quantities of methyl paraben that acts as a preservative. Finally the drug, Miconazole Nitrate was incorporated to the gel with continuous stirring until complete dispersion takes place. Six formulations of the topical gel were prepared by incorporation of various polymers alone and in combination. The prepared gels were packed in wide mouthed containers and were kept in dark and cool place.3 (Refer Table 1).

EVALUATION OF THE GELS – caps lock:

The prepared gels were visually inspected for clarity, colour and transparency. Smears of gels were prepared on glass slide and observed under the microscope for the presence of any gritty particles.

An alkaline or acidic formulation can lead to irritation of the skin and hence checking of the surface pH is an important parameter. This test was performed by dipping a digital glass electrode inside the prepared gel.4, 5

To measure the consistency, a cone was attached to a rod at distance of 10cm and it had to be dropped in such a way that it had to fall on the centre of the glass cup with the gel. The penetration of the conefrom the surface of the gel to the tip of the cone inside the gel was measured. The distance travelled by the cone was noted down after 10 seconds.6, 7

The viscosities of the various prepared gels were determined by using a Brook Field viscometer (model-DVE) with spindle LV3 at a temperature of about 35±2 ºC.

A gram of the gel was weighed accurately and placed inside a tightly closed volumetric flask with 10ml of methanol. Shake the flasks for 10 minutes and then 100ml of the prepared phosphate buffer of pH 7.4 was added and was further subjected to sonication. The absorbance of the above solution was determined using a spectrophotometer at λ max 220nm for its drug content against an appropriate blank solution.2, 8, 9

The in - vitro release studies were done by using open ended cylinders using egg membrane. A glass cylinder was taken which had both its ends open of dimensions 12cm height, 2.1cm outer diameter and 1.5cm inner diameter. The egg membrane was then tied to one end of the open ended glass cylinder compartment. Calculated quantity of gel (1gm) was weighed and was placed in the donor compartment and this apparatus was immersed into a beaker containing 100ml of phosphate buffer of pH 7.4.

The cell was submerged into a depth of 1cm below the surface of the buffer solution in the receptor compartment and was agitated using magnetic stirrers and the temperature needed was maintained at 37±1ºC throughout the study. Aliquots of 5ml sample were withdrawn and were replaced periodically with the fresh buffer pH7.4 solution at intervals of fifteen minutes for the first hour and every half an hour for the next seven hours. The amount of drug released was estimated by using UV spectrophotometer at 220nm.10

The in vitro release of the best two formulations was compared with the marketed product (Daktarin gel- Miconazole Nitrate 20mg/g topical gel) by using the same methods as stated above.

Antifungal activity of sample was determined by antifungal susceptibility test. Prepare PDB Broth and inoculate the culture. Then it was kept in shaker for a day. The potato dextrose agar was weighed as 3.9g and dissolved in 100ml using distilled water and then1gm of agar was added. Then, the medium was kept for sterilization. After sterilization, the media was poured in to sterile petriplates and were allowed to solidify for twenty minutes. After solidification, the inoculums were spread on the solid plates with sterile swab moistened with the fungal suspension

The disc were placed in PDA plate and 20µl of (20 µl of Different concentrations: 1000µg, 750µg, 500µg, 250µg) each sample were added. each samples were placed in the disc. The plates were kept at room temperature. Then the microbial growth was determined by measuring the diameter of zone of inhibition. After incubation for 18 hours to 72 hours at 25ºC, the fungal growth was observed and the percentage inhibition was measured.

All the selected formulations that showed a sustained release were subjected to stability testing as per ICH norms and WHO guidelines at a temperature of about 40±2ºC as well as at room temperature for the same period of time. Samples were withdrawn at the end of every month and analysed for drug content, appearance and pH.5,7

The values of pH were within the range of the skin pH that is in between 5.9 and 6.8, this indicates these gels cannot cause any local irritation to the skin surface. Table 2 shows the surface pH of all the formulations.

TABLE 2: VALUES OF pH, CONSISTENCY AND DRUG CONTENT OF THE DEVELOPED GELS

The results of in vitro permeation studies of gel formulations across egg membrane are depicted in Table 4, Figure 1 and Table 5, Figure 2. The drug release from all the formulations at the end of 8 hours ranged from 68.78±0.42 to 99.88±0.05%. It can be observed that gels containing carbopol 940 and HPMC and carbopol 940 alone released the drug at a sustained manner when compared to those gels containing SCMC and sodium alginate alone which released at a faster rate within 8 hours. The release from the two best formulations that is F1 and F4 were compared with the release from the marketed formulation. The release profile was found to be sustained for the formulated formulations when compared with the marketed gel. 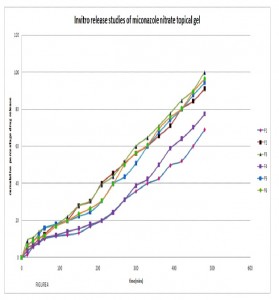 TABLE 5: IN - VITRO RELEASE OF F1 AND F4 COMPARED WITH MARKETED GEL 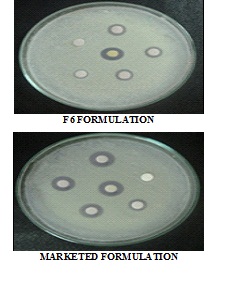 The above figures represent the zone of inhibition for the prepared gels and the marketed gel.

There were no significant variations in the drug content, consistency, pH and physical appearance of the gels after storing at the prescribed temperatures as mentioned earlier. All the gels showed promising results. This indicates that the drug was stable even after 3 months of short term storage. Refer Table 7.

CONCLUSION: The present work aimed towards developing the topical gel of Miconazole Nitrate for the treatment of Candidiasis using various gelling agents like carbopol 940, HPMC, SCMC, sodium alginate in combination as well as alone. Miconazole Nitrate is an antifungal agent belonging to the imidazole group of drugs. Since oral route causes GI side effects and first pass metabolism there is a decrease in the bioavailability, in order to prevent this disadvantage, gels containing Miconazole Nitrate were prepared. Six formulations of the topical gels (F1, F2, F3, F4, F5 and F6) were prepared using different polymers as mentioned earlier.

Thus it was concluded that Miconazole Nitrate gels can be successfully prepared by using some of the polymers which made the gel bioadhesive, making it stay on the skin for a prolonged period of time and releasing the drug over an sustained manner providing a slow diffusional path length which will be helpful to avoid more fluctuations and also reduces the cost of therapy.

ACKNOWLEDGEMENTS: The authors wish to thank Fourrts India Limited, Chennai for sponsoring the gift sample of Miconazole Nitrate and the Principal, the project guide and all the other faculties of Pharmacy, Sri Ramachandra University, Chennai for permitting to avail the research facilities in the college.