Categories Menu
Home » DESIGN, FORMATION AND EVALUATION OF A CO-DRIED DIRECTLY COMPRESSIBLE EXCIPIENT “TSAG-15” AND ITS UTILIZATION IN THE FORMULATION OF A RAPID RELEASE-MOUTH DISINTEGRATING ASCORBIC ACID TABLETS

DESIGN, FORMATION AND EVALUATION OF A CO-DRIED DIRECTLY COMPRESSIBLE EXCIPIENT “TSAG-15” AND ITS UTILIZATION IN THE FORMULATION OF A RAPID RELEASE-MOUTH DISINTEGRATING ASCORBIC ACID TABLETS

DESIGN, FORMATION AND EVALUATION OF A CO-DRIED DIRECTLY COMPRESSIBLE EXCIPIENT “TSAG-15” AND ITS UTILIZATION IN THE FORMULATION OF A RAPID RELEASE-MOUTH DISINTEGRATING ASCORBIC ACID TABLETS

ABSTRACT: A research was conducted to design a directly compressible filler binder characterized with rapid release and mouth disintegrating. Acacia gum was obtained from local source and was purified using a standard method. Tapioca starch was also extracted from cassava tuber using a standard method. Both primary excipients were evaluated for power properties and coprocessed at varying concentration using mixture of isopropranol and water at ratio 2:1. The various coprocessed placebo composite filler-binders (TSAG) were evaluated for granules and tablets properties. The composite containing 85 % tapioca starch and 15 % acacia gum (TSAG-15) have excellent flow rate, angle of repose, compressibility index and Hausner’s ratio: 25 g/s, 30o, 17.3 %, and 1.2 respective. The placebo tablets of this composite was characterized with high functionality, when compressed at 6.5 KN, gave crushing strength of 102 N, friability of 1.12 %, disintegration time of 5-6 min. Ascorbic acid tablets compacted with the composite filler binder having 80 % TSAG-15 and 20 % ascorbic acid gave good compacts with average crushing strength of 60±0.5 N, friability of 1.2 % and average disintegrating time of 1 min 48 s. Since the compacts possessed acceptable tablet quality and met the condition for a mouth disintegrating tablet by disintegrating within 3 min. TSAG-15 is therefore acceptable for formulation of fast release, mouth disintegrating tablets of highly soluble active ingredients.

INTRODUCTION: Amongst various route of drug delivery, oral route has being adjourned as the most preferred and more acceptable to patients and the clinician.

However, some of the setback for per oral administration of drugs include: hepatic first pass metabolism and enzymeatic degradation within the GI tract which prohibit oral administration of some classes of drugs such as peptides and proteins, bed ridden, children and old age patients often face swallowing problems leading to  poor patient compliance.

In view of these, other absorptive mucosa has been considered as potential sites for drug administration.

Tran’s mucosa routes of drug delivery such as the mucosal linings of the nasal, rectal, vaginal, ocular and oral cavity, offer distinct advantages over per oral administration for systemic drug delivery. These advantages include possible bypass of first pass effect, avoidance of pre systemic elimination within the GI tract and a better enzymatic flora for drug absorption 1.

The buccal region offers an attractive route of administration for systemic drug delivery. The mucosa has a rich blood supply and provides rapid absorption for drugs than oral route. Therefore, the oral mucosa may be a potential site for both conventional and controlled or sustained drug delivery.

The permeabilty of the oral mucosa is low; hence the oral could be utilized for potent drugs which are required in small doses 2.

Orodispersible tablets are prepared which when placed on tongue disintegrates within seconds and the drug dissolves or get dispersed in saliva3. As no water is needed to administer these tablets, these offer an advantage for travelers who may not have access to water. The technologies employed for preparation of orodipersible tablets include: lyophilization4, moulding5, direct compression 6, cotton candy process 7, spray drying 8, sublimation 9 and nanonization10. These techniques are based on the principles of increasing porosity and/or addition of superdisintegrant and water soluble excipients in the tablets 11.

Plant products nowadays are widely used as a substitute to synthetic products due to ease of local available, lower prices as compared to synthetic products, biocompatible, biogradable and environment friendly nature. Locust bean gum also called carob bean gum extracted from the seeds of the Carob tree (Ceretoniasiliqua), mostly found in the Mediterranean regions. Locust bean gum has been widely used in food industry as a thickening and gelling 12. Recently it has been established as a potential superdisintegrant in orodispersible tablets 13. Owing to extensive swelling properties and superdisintegrant action of locust bean gum, it was used as superdisintegrant in orodispersible tablets containing taste masked microspheres of ofloxacin 14.

Hence, this research work planned to design, formulate and evaluate a directly compressible excipient characterized with rapid release and disintegrate within 3 min in the mouth using a composite excipient TSAG-15 made from acacia gum and tapioca starch..

Extraction and purification of Acacia sieberiana gum: The method of Karayyaet al15, used by Shittuet al 16, was adopted. One kilogram of the gum was dispersed in 2 L of hot distilled water. The hydrocolloid was then filtered through 75 μm size linen. The gum was precipitated from the aqueous, medium by adding slowly while stirring, 5 L of 95 % ethanol. The gum was dried in a Gallenkamp oven (model BS) at 60°C.

The rasp consists of a sheet of metal plate perforated with nails, clamped around a stainless bucket with the protrusions facing outwards. The tubers were then manually rasped to a pulp on the stationary grater (which is the metal plate perforated by nails). Water was applied in small quantities continuously to the rasper. The process was continued until the whole tubers were turned into a fine pulp in which most but not all of the starch granules were released.

After rasping, pulp from the sump was then pumped on to a nylon fastened /clamped around a stainless bucket. A small spray of water was applied to assist the separation of starch granules from their fibrous matrix and to keep the screen mesh clean while water was added, the mass were turned manually to aid the release of the granules.

The sediment / fine granules were centrifuged. After the removal of free water from the starch, cake was obtained. The starch cake was then crumbled into small lumps (1-3 cm) and spread out in thin layers on stainless trays and air dried for 120 h 17, 18.

The slurry form of tapioca starch (TS) (sieved fraction, <75 µm) was coprocessed acacia gum (AG), (sieved fraction, <75 µm) using the method of Tsai et al19. The slurry was made by suspending the TS in a solution of Isopropranol and freshly distilled water in ratio 2:1 respectively. TS slurry was blended with AG at concentrations indicated in Table 1 as a dried mass relative to TS. The composite slurry was stirred vigorously with a stirrer until a semi-solid mass easily ball was formed. The composite mass was then granulated through a 1500 µm and codried at 60oC until a constant weight was reached. Codried granules were pulverized and sized by passing through mesh size 500 µm. The powder and tabletting properties of the codried products were evaluated.

TABLE 1: FORMULA FOR FORMATION OF TSAG

Where Wt and W0 represent weight of powder after time ‘t' and the initial weight before heating respectively.

Determination of Flow Rate and Angle of Repose: Angle of repose was determined using a standard method and equation 3 bellow.

The flow rates were determined with the aid of Erweka flowability tester (model GDT, Germany).

Bulk and Tap density:These parameters were determined by weighing 50 g quantity of each granule/powder and pouring into a 100 ml measuring cylinder. The volume (Vo) was recorded as the bulk volume. The total weight of the granule/powder was noted. The bottom of the cylinder was raised 10 cm above the slab and made to fall on the platform continuously for 100 taps. The volume of (Vt) of the granule was recorded, and this represents the volume of the granules minus the voids and is called the tapped volume. The final weight of the powder too was recorded as the tapped weight20.

The bulk and tapped densities were calculated as:

Where, Bd and Bt, are bulk and tapped density respectively, and W, is the weight of the   powder (50 g).

The results presented are the mean of three determinations.

Where ρo is the poured or bulk density and ρkis the tapped density.

Weight variation limit test: The weights of 10 tablets were determined individually and collectively on a Metler balance (Denver, XP-300, USA). The mean weight, percentage (%) deviation from the mean and standard deviation were calculated.

Compact Volume: The volume of a cylindrical tablet having radius 'r' and height 'h' is given by the following equation

Where T is the tensile strength of the tablet (MNm-2), F is the load (MN) needed to cause fracture, d is the tablet diameter (m). Results were taken from tablets which split cleanly into two halves without any lamination. All measurements were made in triplicate, and the results given are the means of several determinations.

Compression pressure: This was derived from the relationship between the applied pressure and surface area.

Determination of Dilution Capacity: Ascorbic acid was used as a model drug /active ingredient.Model drug was blended in deferent ratios, ranging from 0 %, 5 %, 10 %, up to 50 % with TSAG-15 and TSAG-20.Formulations were blended by method of dilution and lubricated with 1 % magnesium stearate. Each batch was compressed for 30 seconds on single punch Carver hydraulic hand press(model, C, Carver Inc. Menomonee Falls, Wisconsin, U.S.A.) at pressure load of 7.5 KN, target weight of 500 mg.

Compacts were allowed to relax for 24 h post compression. Compact dimensions (diameter and thickness) were determined using a digitalized Vernier Caliper. Crushing strength was determined using an electronic/digitalized tablet hardness tester (model EH O1, capacity 500 N,Indian). A relationship between amount in percent (%) of model drug added to the formulation and the tensile strength will be generated.

In general, the capacity was expressed by the dilution potential as being an indication of the maximum amount of active pharmaceutical ingredient that can be compressed with the excipient, while still obtaining tablets of acceptable quality (that is, acceptable crushing strength average of 60 N, friability, < 1.0 %, good disintegration time < 15 min, and must meet the requirement of U.S.P weight variation limit test). 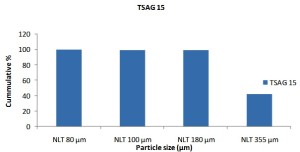 Flow Rate: From table 3 the batches had flow rates ranging from 15.11 to 20.67 g/sec. A good flow property is essential for compression of tablet because it ensures proper flow of granules from hopper into the die cavity.

From the result obtained, the flow rate increased with increase in percentage of acacia gum.

Compressibility Index: Powders with compressibility index of 38-40 % are very cohesive and poorly flowable. Values above 20 % do not indicate very good flow behaviors.

Moisture Content: The TSAG-15 had percentage loss on drying of 12 % this agrees with the fact that granules for compression must have minimum moisture content which varies with the material in order to compress satisfactorily.

Hausner’s Ratio: It is a measure of interparticulate friction in the powder22. It is useful in prediction of powder flow properties. The TSAG-15 gave Hausner’s ratio 1.16. Good flowability has ratio of 1.2 (Hausner’s, 1967), while more cohesive and less free flowing powders have Hausner’s ratio greater than 1.6. The results obtained in table 3 indicate that the powder have low inter particulate friction and thus good flowing and less cohesive.

NB: B1 and B2 poor flow properties 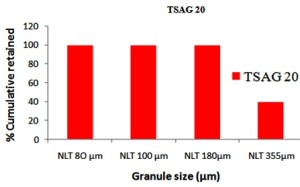 Fig. 3 showed that as the ascorbic acid content increases the tablet thickness increases. This is an indication that the tablet density decreases with increase in amount of ascorbic acid (AA) in both TSAG-15 and TSAG-20.

The increase in tablet thickness is higher in TSAG-15 than TSAG-20. This showed that tablets of TSAG-20 AA are more compact than those of TSAG-15 AA. 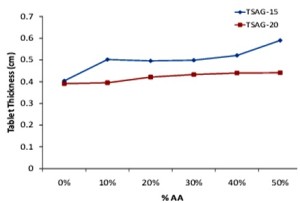 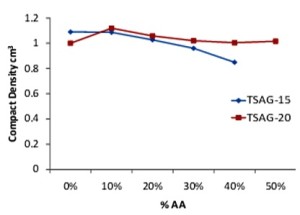 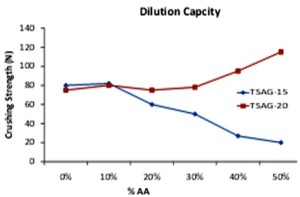 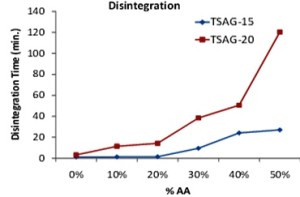 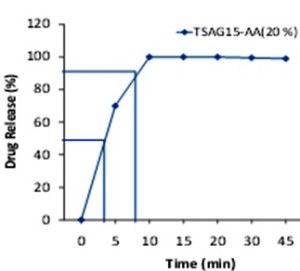