ABSTRACT: Pulsatile system is gaining a lot of interest as it increases patient compliance by means of providing time and site specific drug delivery system. This work will aim at the design of a sustained release formulation with potential use of metoprolol tartrate capsule which is used in the treatment of hypertension. The design involves the preparation of cross linked hard gelatin capsules by using formaldehyde, then the drug diluents mixture loaded in, which was separated by using hydrogel plugs of different polymers, such as, HPMC 15cps, HPMC 50cps, HPMC 100cps, HPMC K4M, HPMC K15M, HPMC K100M, xanthan gum, carbomer 940, carbopol 971, sodium CMC and sodium alginate of two different amounts (75mg and 100mg respectively). Prepared formulations were subjected to evaluation of various phycal parameters and in vitro drug release studies. From the in vitro dissolution studies it was found that by increasing the amount of polymer, release rate was decreased. 75mg of HPMC 15cps showed 91.23% drug release in 5hr whereas 100mg showed 96.68% drug release in 7hr. Similar decrease in the release rates were found with the increase of other polymers of the study. Furthermore the release data was fitted to various mathematical models such as Zero order, First order, Higuchi, Korsmeyer Peppas and Hixson-Crowell kinetics. The drug release follows mixed order kinetics and mechanism was found to be non-Fickian diffusion. As this drug delivery system is still in the developmental stage much more research can be performed to make it as a practical clinical alternative

INTRODUCTION: The oral route of drug delivery is always considered as the most convenient means of drug administration. It has the greatest degree of patient compliance, as a result providing reproducible and effective plasma concentrations in vivo 1.  For sustained release systems, the oral route of administration has received the most attention with respect to research over various issues. This is due to that there is more flexibility in dosage regimen for the oral routes than any other routes.

The reason that the oral route achieved such popularity is due to its ease of administration and traditional belief that by oral administration the drug is well absorbed 2. Traditionally, drug delivery systems have focused on a prolonged drug output with the objective of minimizing peaks and valleys of drug concentrations in the body to optimize drug efficacy and to reduce adverse effects.

A reduced dosing frequency and improved patient compliance can also be expected for the prolonged release drug delivery systems, compared to immediate release preparation 3. There are certain conditions for which such a sustained release pattern is not suitable at all. This type of conditions demands release of drug after a lag time. In other words the drug does not require to be released right after administration, instead it starts releasing after a suitable lag time. Such a release pattern is known as pulsatile release. Recent studies have revealed that diseases have a predictable cyclic rhythm that the timing of medication regimens can improve the outcome of a desired effect. This condition demands release of drug as a pulse after a time lag and such system has to be designed in a way that complete and rapid drug release should follow the lag time. Such systems are known as pulsatile drug delivery systems (PDDS) 4.

PDDS delivers drug in rapid and burst manner within a short time period immediately after a programmable lag phase 5. There are many situations where drug is needed to be released immediately (after bursting the delaying film a coat) at specific site. These situations, therefore, compel designing a delayed fast release systems. These systems are mainly appropriate for drugs that are metabolized to pharmacological active compounds, drugs which have long in vivo half lives showing an inherently prolonged duration of action, drugs with very short in vivo half lives which require a prohibitively large amount of active ingredients in dosage form, drugs which are required in large doses for therapeutic effect and drugs which are required in very low dose. Additionally a delayed burst release can also be utilized for enhancing absorption, reducing side effects, increasing and decreasing dose 6.

Cardiovascular diseases, several functions (e.g. BP, heart rate, stroke volume, cardiac output, blood flow) of the cardiovascular system are subject to circadian rhythms. For instance, capillary resistance and vascular reactivity are higher in the morning and decrease later in the day whereas platelet aggregation is increased and fibrinolytic activity is decreased in the morning, leading to a state of relative hypercoagulability of the blood. Careful analysis of trials illustrates that myocardial infarction (MI), stroke, ventricular ectopy, and sudden cardiac death occur between 6am and noon.

The peak blood pressure is between 6am and noon, with activation of the sympathetic nervous system prior to awakening, blood pressure begins to increase with the heart rate. These changes in blood pressure corresponds the morning activation in catecholamines, renin, and angiotensin. Commonly used drugs are- nitroglycerin, beta blockers, calcium channel blockers, ACE inhibitors etc. Metoprolol tartrate is a selective beta1-adrenoreceptor blocking agent. It also inhibits beta2-adrenoreceptors, chiefly located in the bronchial and vascular musculature. The mechanism of the antihypertensive effects of beta-blockers has not been fully elucidated.

Pulsatile drug delivery system is likely to be successful for diseases such as asthma, peptic ulcer, cardiovascular diseases, arthritis, hypertension, and hypercholesterolemia. Hence, metoprolol tartrate was used as the prototype drug. Based on this concept and a difference in the pH throughout the GIT, a time & pH dependent pulsatile drug delivery system was designed which will leave the stomach, arrive at the ileocaecal junction in 4-6 hours after administration.

A total of 25 hard gelatin capsule shells of size “0” were taken and their body were separated from the cap and then placed over a wire mesh. 25ml of 37% v/v of formaldehyde solution was taken in an empty dessicator. 2.5g of potassium permanganate was added into the formaldehyde. The wire mesh was kept inside the dessicator and it was closed and sealed.

Hard gelatin capsules of size ‘0’ were taken. Treated body and untreated caps were used for filling purpose. Six capsules for each formulation were prepared manually by the following procedure:

The cap and body of the capsule was removed manually by hand. The drug lactose mixture (50mg) that was equivalent to 25mg dose of metoprolol tartrate was filled into the empty capsule body forming the second dose of the medication. The bodies containing drug lactose mixture were then plugged with different amounts of polymers mentioned in the table just above the second dose and lightly pressed with a glass plunger. In the same manner the first dose of same quantity followed by polymer layer was then filled in the same capsule body above the previous layers. After that equivalent amount of drug lactose mixture were weighed and placed over the first dose acting as the immediate release (dose) of the drug. Then the cap was joined with the body and stored into an air tight container for further use.

Different type of tests both physical and chemical was carried out for treated and untreated capsules. Properties like shape, stickiness, color, odor etc were checked visually. Length, Diameter (both external and internal) and thickness was measured with the help of a Vernier caliper 8.

Dissolution studies were carried out by using USP XXIII dissolution test apparatus by rotating basket method in different media. In order to simulate the pH changes along the GI tract, three dissolution media with pH 1.2 and 6.8 were sequentially used referred to as sequential pH change method. During the experiment the pH 1.2 medium was first used for 2 hours (since the average gastric emptying time is 2 hrs) and then the media was removed and a new media of pH 6.8 was added and the procedure continued for the next 10 hours. The amount of media in each time was 900ml. To avoid floating the capsules were placed within baskets. The procedure was maintained at 37±0.5o C and the rotation speed of the basket was 50rpm. Ten milliliters of sample were withdrawn from the dissolution media at predetermined intervals. Same amount of fresh buffer was replaced during each withdrawal. The absorbance was measured at 275nm by UV absorption spectroscopy.

The formaldehyde treated capsules were found to be slightly thicker; as a result they displayed much better sustained release activity compared to an untreated capsule. The increase of thickness was possibly due to the treatment process. Average weight of empty capsules was found in the range of 92.4-94.1 mg. Treatment did not influence the average capsule weight significantly. During the dissolution of untreated capsule it was seen that the body and cap dissolved between 15 minutes. On the other hand during the dissolution of treated capsule it was been seen that the cap dissolved within 15 minutes but the treated body remained intact. Drug and polymer did not have any chemical or physical interaction was proved by FTIR studies. Amount of metoprolol tartrate in each capsule was 75mg that was divided into three equal dose separated by polymer layers.

TABLE 2: PHYSICAL CHARACTERISTICS OF EMPTY GELATIN CAPSULES WITH OR WITHOUT TREATMENT 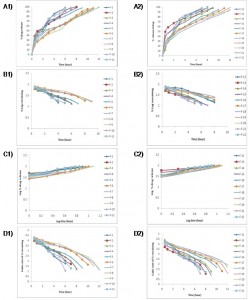 CONCLUSION: The results all the way suggest that lag time is dependent on the nature of the materials employed in plug preparation and found that position of the plug in the capsule body significantly affects lag time. It is proved that an increase in the filler concentration in the plug results in a decrease in lag time. Finally, it is possible to formulate a dosage form release a drug over a desired period of time with specific release rates by manipulating the polymers and their amounts used to prepare plugs. Rapid advancement and newer developments in the field of drug delivery have led to the formulation of the pulsatile drug delivery system, which can be formulated with ease and, provides a significant amount of therapeutic benefits. It should also be noted that this drug delivery system is still in the early developmental stage within the laboratory walls and much more research can be performed to make it as a practical clinical alternative.

ACKNOWLEDGEMENT: Authors are grateful to Popular Pharmaceuticals Ltd. and Eskayef Bangladesh Limited for their kind support to supply active pharmaceutical ingredient and capsule shells of this study.