ABSTRACT: Rutin trihydrate a herbal drug having abundant medicinal properties, mainly used for topical treatment of inflammation, presents a hindrance and reduced anti-inflammatory activity. It is BCS class II drug having low oral bioavailability, poor water solubility (0.125 g/L), and low stability of rutin in aqueous alkaline medium, restricting its application in use. So, it is successfully formulated as an emulgel to improve its anti-inflammatory properties. The current study aims to design, formulate, and optimize Rutin trihydrate emulgel to enhance its efficacy and stability. Emulgel was designed, optimized by using a central composite design taking three independent variables and one dependent variable. Five responses were generated, and the optimized formulation was prepared using carbopol 934(0.8%), clove oil (12.5 ml), and span (2.32%). The emulsifying agent being Tween 20, Span 20, and the preservatives used are methyl and propyl parabens. The formulation (F2) with this combination gave emulgel of yellow color, homogeneous with good consistency, possessed pH of 6.51 ± 0.04, drug content of 98.7%, the viscosity of 14, 980 cps, spreadability 13.5 gm.cm/sec and extrudability 36.2 and in-vitro drug release of 74.8%  for 8 h. Since, F2 emulgel possesses an edge in terms of spreadability, viscosity, extrusion, in-vitro drug release it would become a solution for loading hydrophobic drugs in a water-soluble gel base.

INTRODUCTION: A drug delivery system via topical route has been used for local skin diseases because of its advantages of not undergoing first-pass metabolism and acid or enzymatic degradations 1. Emulgels, a biphasic semi-solid formulation 2 comprise of aqueous and non-aqueous phases, delivering both hydrophilic and lipophilic agents 3.  Emulgels, are emulsions prepared by mixing with gums 4.

Also known as querecetin-3-Rutinosoid or sophoriis known for its abundant medicinal properties. But the drug belongs to class II drug under BCS classification, with poor water solubility and poor bioavailability. Response surface methodology (central composite design (CCD)) is a tool for quality by design, which involves statistical and mathematical models building an experimental design model on the basis of polynomial equation with experimental data thus saving lots of time 6. Various computer software applications are available for the processing of the experimental data, such as Design-Expert® and Minitab, while reducing the time and increasing the accuracy of experimental data 7.

Preparation of Rutin Trihydrate Emulgel: Thirteen formulations were prepared using varying amount of gelling agent and penetration enhancers. The gel phase was prepared by mixing carbopol 934 in distilled water, pH was maintained to 6.5 using triethanolamine (TEA), and the oil phase was dispersed with span 20 in light liquid paraffin in which clove oil was added, the aqueous phase was prepared by dissolving tween 20 in purified water. Rutin trihydrate was solubilized in methanol, and it was added to the aqueous phase. The oil and aqueous phases were separately heated to 70–80 ºC; then, the oily phase was added to the aqueous phase with continuous stirring until cooled to room temperature 8. The formulations were formulated and optimized using a central composite design. Thirteen confirmatory runs were formulated and evaluated for parameters.

Experimental Design: The formulation was optimized using a central composite design with three independent variables to estimate various parameters, interactions and also to evaluate the quadratic effects of ingredients on Rutin emulgel by constructing model using Design Expert (version 8.0.0, Stat-Ease Inc., Minneapolis, Minnesta). The polynomial equation generated by this experimental design is given as:

b0 being regression coefficients from the observed experimental values of Y. The terms X1, X2, and X12, X22 and X32 indicates the interaction and quadratic terms. 13 runs were generated for the responses alphabetically labeled as F1 to F13, having a concentration of the factors ranging from minimum to maximum as given in Table 1.

Organoleptic Properties: All the formulated emulgels were visually inspected for colour, homogeneity, and phase separation after they have been settled in the container immediately as well as regularly for an interval of 15 days duration 9.

Measurement of pH: The prepared emulgels were evaluated for pH in triplicate by taking 1 g of each emulgel in 10 mL beaker and measured the digital pH meter at room temperature.

Determination of Spreading Coefficient: A ground glass slide was fixed on the wooden block coated with an excess of emulgel under study. This slide is sandwiched with another second slide. The second slide is attached to a hook of the balance.

In order to expel the air, a weight of 250 - 500 mg was placed on the top of the two slides for 5 min. The required quantity of weight was placed in the other pan which is attached to the pulley through a hook. The time taken by the top slide to cover a distance of 5 cm was noted. A shorter interval indicates a better spreading coefficient 10.

Viscosity: The viscosity of the formulated preparations was determined using brook field viscometer with spindle no 64 (Brookfield Engineering Laboratories).

The formulation whose viscosity was to be determined was added to a beaker covered with a thermostatic jacket. Spindle was allowed to pass into the emulgel, and the reading was noted at 30 rpm 11, the apparatus being maintained at 25 °C.

Drug Content: 1 g of prepared emulgel was mixed with methanol and was kept for shaking for 30 min. The solution was filtered and was diluted suitably using a phosphate buffer of 6.8 pH, and the absorbance was measured at 266 nm. From the absorbance reading, percentage drug content was calculated

In-vitro Release Studies: These studies were conducted in modified Franz diffusion (FD) cells. The prepared emulgel was applied on dialysis membrane, which was placed between donor and receptor compartment of the FD cell while maintaining the temperature of the cell at 37 ºC.

1 ml samples were withdrawn at suitable time intervals and replaced with equal amounts of fresh dissolution media and were analyzed spectrophoto-metrically at 266 nm.

Measurement of pH: The pH readings were taken as an average of three sample readings. The values exhibited by the emulgels are found to be in the range of 6.21 to 6.96. Hence all the formulations were in the normal pH range of the skin.

Drug Content Estimation: The Quadratic Model developed by the software has an f value of 261.49, indicating the significance of the model. P-values of X1, X2, X1, X2 and X12, X22, and X32 less than 0.0500 indicate model terms are significant, having an adequate signal with a good precision ratio of 47.524 Fig. 1. Experimentally percentage drug content estimation of all the runs was done was found to be in the range of 91 to 100.3%. 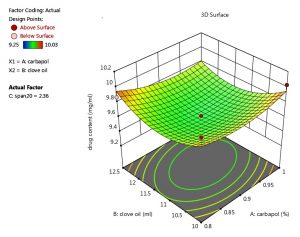 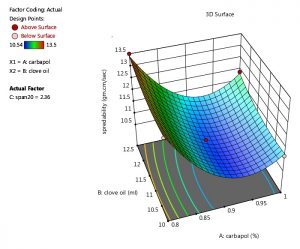 Spreadability Studies: Spreadability is one of the essential criteria for an emulgel. Spreadability depends on the viscosity of the formulation. The linear Model generated from the central composite design has F value of 14.21 and P values less than 0.0500 implying the significance of the model.

The signal is adequate, which is indicated by an adequate precision value of 8.8793. The experimental studies revealed that F11 formulation (F11 run) was having a good spreadability coefficient Fig. 2.

Extrudability Test: F value of 5.37 and P values of the developed model is less than 0.05 indicates significance of the model; the predicted R² of 0.3175 is not as close to the adjusted R² of 0.5221 having a difference of more than 0.2 having an adequate signal with the precision ratio of 6.566. Therefore the reason might be due to outlier values. Experimentally extrudability values ranging from 30.1 to 36.20 with f8 formulation having a maximum value which correlated with the viscosity values Fig. 4 and Table 2. 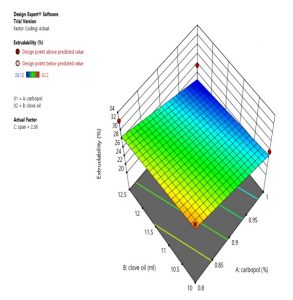 Determination of Viscosity of the Formulation: Formulated emulgels were evaluated for viscosity using Brooke field viscometer using spindle no 64 at 30 rpm . The f value of 1231.01 and p values less than 0.0500 implies the model is significant. In this case Carbopol is having significance on the viscosity of the formulation. Higher the concen-tration of the polymer, the higher the viscosity.

The experimental values correlated with predicted model with F8 and F2 formulation having low viscosity. 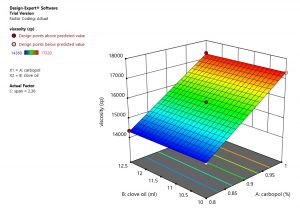 In-vitro Drug Release Profile: The f value of 4.53 and p values less than 0.0500 indicates model terms are significant. In this case, Clove oil and the emulsifying agent is having a high significance on the drug release even though the adequate precision is 6.57 Fig. 5 & 6. 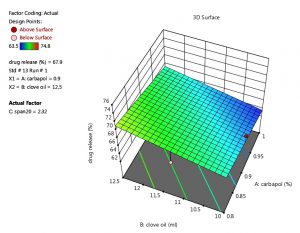 Optimization of Factors by Post Analysis: All the factors are taken given equal importance giving desirability 1, and optimization is carried out by post analysis taking using carbopol 934(0.8%), clove oil (12.5 ml), and span (2.32%) Fig. 7. The observed values are given in Table 3. 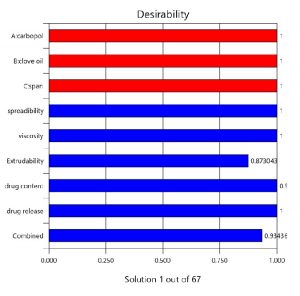 CONCLUSION: The present study demonstrates that the formulated Rutin trihydrate emulgel using 3 factors and 5 responses with the help of a central composite design. The quantitative responses: viscosity, spreadability and extrudability of gels, drug content and in-vitro release for different combinations of independent variables were obtained experimentally and the results were observed to fit in the designed model. The experimental responses of the optimized formulation were found to be close to the predicted responses having a correlation coefficient value 1, which indicates that the Central composite design is a very useful tool in pharmaceutical pre-formulation studies.

ACKNOWLEDGEMENT: The authors sincerely acknowledge the Management and the Principal of RBVRR Women’s College of Pharmacy for providing technical and laboratory support in carrying out the mini work.