ABSTRACT: Bromhexine hydrochloride, mucolytic agent used in the treatment of respiratory disorders. Azithromycin is use in wide variety of bacterial infections. The aim of this present work is to formulate dual drug delivery system containing azithromycin as immediate release and bromhexine hydrochloride as sustained release action. The sustained release part as core tablet of bromhexine prepared because of the frequent daily dosing is required for therapy. The floating formulation of core tablet was prepared because it dissolved in the pH range of 1 to 4. The core tablets of bromhexine hydrochloride were prepared by wet granulation technique. The prepared core tablets were evaluated for different parameters for selection of formula for floating the tablets. The core compressed tablets were evaluated for quick release of coat layer containing disintegrants. The various formulations of core tablets were prepared using HPMC K4M and K15M in different concentration. The prepared tablets were evaluated for physical parameters, disintegration time, floating lag time and drug release study. All the batches show around 70 sec disintegration time, 90 sec floating lag time and drug release up to 12 hrs. In batch B5 containing 30% of HPMC K15M found adequate drug release of bromhexine hydrochloride up to 12 hrs.

The purpose of the present research was to produce quick and slow release biphasic system of azithromycin and bromhexine hydrochloride for upper respiratory tract infections. Upper respiratory tract infections are the illnesses caused by an acute infection which involves the upper  respiratory tract: nose, sinuses, pharynx or larynx2. Bromhexine is a mucolytic agent used in the treatment of respiratory disorders associated with viscid or excessive mucus. In addition, bromhexine has antioxidant properties 3. The sustained release core tablet of bromhexine prepared because of the frequent daily dosing (2 to 3 times per day) is required for therapy of URTI. The floating formulation of core tablet was prepared because it dissolved in the pH range of 1 to 4 and the low solubility in lower region of the gastrointestinal tract 4. Azithromycin is a semisynthetic macrolide antibiotic, which is commonly used for a wide variety of mild-to-moderate bacterial infections. Azithromycin is used to treat or prevent certain bacterial infections, most often those causing middle ear infections,  strep throat,  pneumonia, typhoid, and sinusitis 5.

Immediate release coat layer can be design by using super disintegrants like sodium starch glycolate, crospovidone. Sustained release part can be design by using matrix type of core tablet containing suitable polymers that can float the core tablet. Crospovidone is easily available and cheap. HPMC is a semisynthetic derivative of cellulose, which is swellable and hydrophilic in nature. It is very suitable to use as a retardant material in sustained release matrix formulations with floating properties due to formation of low density swallowable matrix 6.

Core tablets of bromhexine hydrochloride were prepared by wet granulation method. Accurately weighed 18 mg (calculation described by Robison and Eriksen7) of bromhexine hydrochloride was taken for preparation of core tablets. All other ingredients were weighed accurately and mixed in a glass mortar except talc and magnesium stearate. Add IPA slowly to the mixture to form a wet mass. Pass this mass from 20 number of sieve and place these granules for drying in oven. Set 60oC temperature of oven for drying.  After drying of granules, add require quantity of talc and magnesium stearate and mix well. The quantity of granules for matrix core tablet was compressed using a rotary compression machine (Hardik engineering, India) equipped with 6 mm round punches 8. Formulation of preliminary trial batches of the core tablets is show in Tables 1.

* Talc and magnesium stearate was taken in quantity of 1 mg and 2 mg, repectively

Weight variation: The prepared tablets were evaluated for weight variation to find out weight uniformity. Twenty tablets randomly taken from all the bathes and they were weighed accurately on electronic balance (Sartorius weighing India Pvt. Ltd, New Delhi).

The core tablets of bromhexine hydrochloride were prepared by above procedure. The coat layer was prepared using disintegrants by direct compression method. Accurately weighted all ingredients were mixed in mortar. The die of the tablet machine was filled manually with the weighed amounts of the quick release part and the core tablet before the compression. Half quantity of fast releasing powder was place into the die cavity to make a powder bed; on the center of bed core tablet was placed. Then the remaining half portion of the powder was placed over the core tablet. The different formulations containing polymers in various concentrations are show in Table 2. Core Compressed tablet systems were prepared using a 12-mm diameter punch 10.

The core compressed tablets of bromhexine hydrochloride and azithromycin were prepared using above procedure. The concentration of HPMC K4M and HPMC K15M were taken 25%, 30% and 35% individualy for preparation of core tablets. The wet granulation method was utilised for preparation of core tablets of bromhexine hydrochloride. The coat layer was formulated on core tablet using optimised C3 bach. The quantity of all ingredients are show in Table 3.

* Talc and magnesium stearate was taken in quantity of 1 mg and 2 mg, repectively

Ten tablets were taken and finely powdered in mortar. An equivalent amount to 18 mg of bromhexine hydrochloride was accurately weighed and transfer to a 100 mL volumetric flask; 70 mL of 0.1 N HCl was then added. The flask was shaken for 10 min. Finally, the volume was made up to the mark with 0.1 N HCl. The mixture was then filtered and measured by high-performance liquid chromatography (LC-2010 CHT), Shimadzu, Japan. The method to quantify bromhexine hydrochloride and azithromycin was done by HPLC with C18 column (250×4.6 mm) having five µm particle size. The mobile phase consisted of an Acetonitrile: Phosphate buffer pH 6 in the ratio of 45: 55. The liquid flow rate of HPLC was 1 ml/min. The wavelength of detection was 215 nm.

The floating behaviour of prepared tablet was studied in 0.1N HCl solution. The prepared core compressed tablets were placed in 0.1N HCl containing 250 ml beaker. The floating lag time was determined by placing tablet in beaker, to float tablet on surface of 0.1N HCl solution containing beaker. The photograph shows the behaviour of tablet in beaker (Fig.1). The total floating time determine to check the tablet up to how much time tablet float on surface.

The in vitro dissolution studies were carried out using USP 6 dissolution apparatus type II (paddle method) at 100 rpm. Dissolution test was carried out for a total period of 12 h using 0.1N HCl (pH 1.2) solution (900 ml) as dissolution medium at 37 ±0.5°C. Five millilitres of the sample was withdrawn at regular intervals and replaced with the same volume pre warmed (37 ± 0.5°) fresh dissolution medium.

The samples withdrawn were filtered through 0.45 μ membrane filter, and drug content in each sample was analysed by high-performance liquid chromatography (LC-2010 CHT), Shimadzu, Japan. The wavelength of detection was 215 nm. The release of both drugs was determined simultaneously.

Drug release mechanisms and kinetics are two important characteristics of delivery system in the dissolution system. The mechanism of drug release from prepared tablets was carried out by applying mathematical models. The data were taken from dissolution of bromhexine hydrochloride from core tablets.

Where, ft is fraction of dose release at time t. K0 is zero order rate constant expressed in units of concentration/time.

In Higuchi's model, percentage of drug released versus square root of time graph is plotted.

Where, ft is fraction of dose release at time t. KH is the constant for higuchi‘s model.

Comparison of dissolution profile of optimized batch with marketed formulation:

The dissolution study of conventional marketed formulation containing 8 mg of bromhexine hydrochloride carried out using same procedure as mention above. The comparison of dissolution profile done with optimised batch.

The evaluation parameters of prepared core tablets of bromhexine hydrochloride are show in Table 5. The weight variation of prepared tablets was found between 116.8 to 123.4, which is acceptable in range as per standard limit. Hardness and Friability data shows that good mechanical properties because the hardness of tablets were found near to 5- 6 kg/cm2 and friability were found to less than 1%. Tablets from batch H1 were not floated properly due to less amount of HPMC K4M. Tablets from batches H2 and H5 moved up and down in solution due to unadequate quantity of HPMC K4M. Tablets from batches H3, H4 and H6 floated on surface of 0.1N HCl but brusting effect were observed may be due to microcrystalline cellulose (MCC). Tablets from H7 batch floated on surface of 0.1N HCl containing lactose instead of MCC. Batch H7 containing HPMC K4M in 30% concetration to tablet weight. The floating lag time was found to 69 seconds.

The evaluation of paepared tablets is show in Table 7. The weight variation of all prepared batches found to be acceptable in range. The weight of all tablets were found between 734.7 mg to 765.8 mg. The friability of all batches was found to be acceptable in range, less than 1%. Form hardness it can be conclude that the tablets show adequate mechanical strength because it was found near to 4.5 kg/cm2.  The disintegration time of outer coat layer were found between 65 to 73 seconds for all batches B1 to B6.

Floating behavior of core tablets: The floating study of prepared tablets were carried out in 0.1 N HCl containg beaker. Fig. 1 show the behavior of tablets with specific time. The floating lag time of all batches were found between 81 to 100 seconds. The lowest floating time was obsered in batch B6 containing 35% of HPMC K15M. total floating time of all the batches were found more than 24 hours which indicate that the prepared core tablet can float for suficient time in stomach. 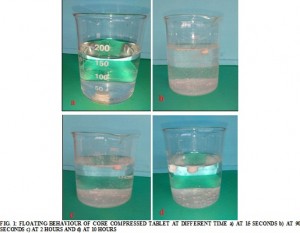 FIG. 1: FLOATING BEHAVIOUR OF CORE COMPRESSED TABLET AT DIFFERENT TIME a) AT 15 SECONDS b) AT 90 SECONDS c) AT 2 HOURS AND d) AT 10 HOURS 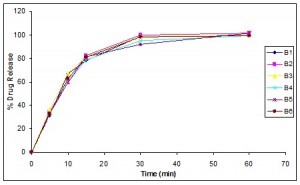 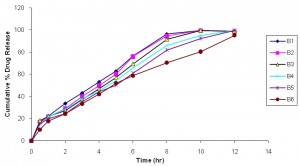 The coefficient (R2) was calculated for all batches using MS-excel and graphs were plotted. The value of rate constant and coefficient are show in Table 8. Based upon the regression coefficient, zero order drug release of bromhexine hydrochloride from prepared core tablets was observed. The drug release also follows the higuchi model. The drug release exponent was found to be 0.60 to 0.69 in korsmeyer peppas plot which indicated that the drug transport system is non –fickian type due to HPMC.

The comparison of dissolution profile of bromhexine HCl is show in Fig. 4. The dissolution profile of optimised batch was found non-identical with the marketed formulation. The drug release from marketed conventional tablet was found fast than dual release tablets. Almost drug was released at 60 minutes where as only 20 % drug released from prepared dual release tablets. 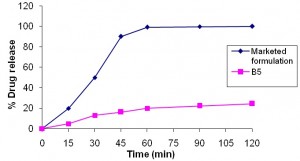