ABSTRACT: Protein kinases are key players in cellular signal transduction and perturbations in its activity leads to cancer. Targeting these seems to be sufficient to provoke apoptotic response, thus limiting the process of tumorogenesis. Among kinase inhibitors, imatinib has demonstrated magnificent clinical efficacy. But patients with advanced disease harbor faces resistance. Currently there is requisite of making strategies to overcome resistance and adverse effects in order to provide maximum benefit to the patients. Present work was to develop a new analog of Imatinib with the objective to provide a molecule with best combination of properties, safe and affordable drug. For this purpose Imatinib was taken as a lead molecule which has shown a successful positive bioactivity score of 0.59 for kinase receptor predicted using Molinspiration software. Imatinib was optimized using the concept of Bioisosteric replacement, in order to achieving better affinity towards protein kinase receptor. Newly designed analogs were found in compliance with Lipinski rule of five recommendations for new chemical entity to have good oral bioavailability with no violations. In M (1-6) series of newly designed analogs M4 showed highest score of 0.94, likewise compounds M1, M2, M3, M5 and M6 showed their highest score of 0.86, 0.75, 0.82, 0.86 and 0.76 respectively for protein kinase inhibitor.  Target prediction was done using Swiss target prediction software. All the compounds of M (1-6) series show drug targetability for kinase receptor. Compound M4 showed highest bioactivity score as compared to Imatinib can be taken as a lead for future anti cancer studies targeting protein kinase receptor

INTRODUCTION: Around the globe, huge amount of resources are being invested in prevention, diagnosis, and treatment of cancer. As cancer 1 is the second leading cause of death worldwide. Discovery and development of anticancer agents are the key focus of several pharmaceutical companies.             Protein kinases plays major role in cellular signal transduction events and have essential roles in cell growth, survival, differentiation and migration.

Any disturbances in protein tyrosine kinase (PTKs) activity have been resulted in a number of abnormalities, particularly cancer. Selective small molecule inhibitors are potential therapeutic agents targeting protein kinases involved in cancer and other diseases. In this case, targeting these kinases seems to be sufficient to provoke apoptotic response, thus limiting the process of tumorogenesis.

Among kinase inhibitors, imatinib mesylate has demonstrated magnificent clinical efficacy in more than one type of cancer. Imatinib 2 has set a paradigm for the treatment and management of cancer. It binds kinase domain of PTK as an ATP (Adenine Tri Phosphate) competitive inhibitor thus preventing the interaction with effect or proteins and subsequent signaling pathway. It also has excellent pharmacokinetic profile and therapy is generally well tolerated with mild to moderate toxicity which is manageable on reduction or discontinuation of dosage. Despite its tremendous clinical outcome, patients with advanced disease harbor resistance which is perhaps multifactorial. Currently there is requisite of making strategies to overcome resistance mechanisms and adverse effects in order to provide maximum benefit to the patients. In the present we made an attempt       to discover a new potentially useful analog for imatinib that provides a best combination of properties leading to the development of safe and affordable drug.

ACD (Advanced Chemistry Development’s) or Chem Sketch Freeware 3 is a drawing package that allows you to draw chemical structures including organics, organometallics and polymer structures. It also includes features such as calculation of molecular properties (e.g., molecular weight, density, molar refractivity etc.), 2D and 3D structure cleaning and viewing, functionality for naming structures (fewer than 50 atoms and 3 rings), and prediction of Log P.

Lipinski's rule4,5of five also known as the Pfizer's rule of five or simply the Rule of five is a rule of thumb to evaluate drug likeness or determine if a chemical compound with a certain pharmacological or biological activity has properties that would make it a likely orally active drug in humans. The rule was formulated by Christopher A. Lipinski in 1997. Lipinski states that poor absorption or permeation is more likely when there are more than five H-bond donors, molecular weight is over 500 Da, log P (partition coefficient) is over 5, sums of N's and O's are over 10, The number of rotatable bonds should be less than 10 and the H-bond donors or acceptors should be less than 12 for oral bioavailability

Molinspiration: a web based software was used to obtain parameter such as Mi Log P, TPSA (Topological Polar Surface Area) and drug likeness. Mi Log P, is calculated by the methodology developed by Molinspiration 6 as a sum of fragment based contributions and correction factors. Mi Log P parameter is used to check good permeability across the cell membrane. TPSA is related to hydrogen bonding potential of compound. Calculation of volume developed at Molinspiration is based on group contributors. Number of rotatable bonds measures molecular flexibility. It is a very good descriptor of absorption and bioavailability of drugs. Through drug likeness data’s of molecule, it can be checked molecular properties and structure feature in respect to known drugs.

Bioactivity score: of the drug can be checked by calculating the bioactivity score of GPCR ligand, ion channel modulator, nuclear receptor legend, kinase inhibitor, protease inhibitor, enzyme inhibitor. All the parameters were checked with the help of software Molinspiration drug-likeness score online (www.molinspiration.com). Calculated drug likeness score of each compounds are compared with standard drug. For organic molecules if the probability of bioactivity score is (>0), then it is active, if (-5.0-0.0) then moderately active, if (< -5.0) then inactive.

Swiss Target Prediction: 7 a web server to accurately predict the targets of bioactive molecules based on a combination of 2D and 3D similarity measures with known ligands. Predictions can be carried out in five different organisms and mapping predictions by homology within and between different species is enabled for close paralogs and orthologs.

Several anti angiogenesis drug were evaluated for their molecular properties and bioactivity score. Among that imatinib which shows a highest positive score of 0.59 was selected as a lead.

Protein kinase (PKs) receptor 8, 9 are in dispensible for numerous processes in the cell.  Phosphorylation in turn regulates various cellular function normally and stringently regulated. However, under pathologically condition pks can be deregulated, leading to alteration in the phosphorylation resulting in uncontrolled cell division, inhibition of apoptosis and other abnormalities and consequently to diseases,  Various cancer and other diseases are known to be caused (or) accompanied by de regulation of the phosphorylation . Inhibition of pks has been shown to be a promising therapeutic strategy. Hence protein kinase receptor was selected as a target for our newly designed molecule. 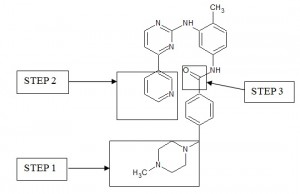 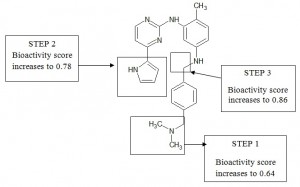 RESULT AND DISCUSSION: After calculating physicochemical properties and bioactivity score for several antiangiogensis drug, imatinib was selected as a lead. Step by step lead optimization was done to improve the bioactivity score to a range of 0.94 to 0.86. Results of compounds M (1-6) in terms of molecular properties (molecular weight, miLogP and TPSA (Topological Polar Surface Area), nrotb, volume, etc.) are valued in Table 7. According to Lipinski rule of five, most “drug-like” molecules have log P ≤ 5, number of hydrogen bond acceptors ≤ 10, molecular weight ≤ 500, and number of hydrogen bond donor’s ≤ 5. Molecules violating more than one of these rules may have problems with bioavailability. On close inspection of Table 7, all molecules were found in compliance with Lipinski rule of five recommendations for new chemical entity to have good oral bioavailability with no violations. The mi Log P valve of all compounds was found below five, suggesting that the molecules have good permeability across the cell membrane which in turn is needed for generation of bioactivity.

Number of violations for all the compounds is zero, it means all newly designed compounds will easily bind to receptors. All the compounds (M1–M6) are within the limit, that is, 160 ˚A in respect of TPSA, which showed that molecules are fulfilling the optimal requirement for drug absorption. In M (1-6) series of newly designed analogs M4 showed highest score of 0.94, likewise compounds M1, M2, M3, M5 and M6 showed their highest score of 0.86, 0.75, 0.82, 0.86 and 0.76 respectively for protein kinase inhibitor. 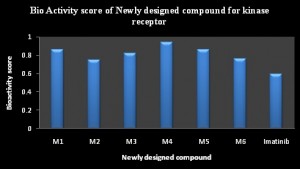 CONCLUSION: As a result of study related to the development of anticancer drug targeting protein kinase receptor, comparison of compounds M (1-6) with Imatinib showed that the compound M4 fulfill Lipinski rule of five and good bioactivity score of 0.91. Our study shows that compound M4 has highest bioactivity score as compared to Imatinib which is a potent anticancer agent. So compound M4 can be taken as a lead for future anti cancer studies targeting protein kinase receptor. 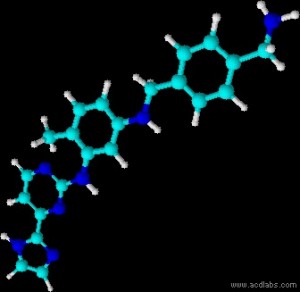