ABSTRACT: In the present work in mathematical modeling, quantitative structure activity relationship (QSAR) studies were performed on some quinolone derivatives as a potential antibacterial agent using statistical work. The regression analysis of the data has shown that the activities of the compound can be modeled excellently in bi-parametric model.A heurisimatedtic algorithm selects the best multiple linear regression(MLR) equation showed the correlation between the observed values and the estimated values of activity is very good(R=0.9849, R2 =O.9700, PRESS=0.0185, 14Rcv2">  =0.9692, SPRESS =7.8631). The results are discussed critically.

INTRODUCTION:  QSAR studies have often been carried out by using regression analysis the biological activities are being modeled using a set of molecular descriptor. In an earlier, report by K.S. Parameshwar, B.A. Kumar, A.S. Reddy, and T. Parthasarathy 1; a QSAR studies on a group of some quinolone derivatives. The introduction of fluorine in quinolone moiety gives rise to the more potent pharmacophore. Survey of literature indicates that the antibacterial activity of quinolones was due to their ability to interfere with the replication of bacterial DNA and recently it has been observed that quinolone congeners also possess anti neoplastic activity where they act against mammalian topoisomerase-11, the homologue of the bacterial target enzyme DNA grace.

In QSAR, we seek to uncover correlations of biological activity with molecular structure with Quantitative structure activity relationship (QSPR); we extend the same notion to general chemical property predication and just biological activity. In either case, the relationship is most often expressed by a linear equation that related molecular properties, X, Y ...........to the desired activityAi for compounds i.

Where m, n and o are the linear slopes that express the correlation of the particular molecular property with the activity of the compound, and b is a constant. If only one molecular property is important, for example molecular volume, than above eqn. reduces to the simple form of a straight line, Ai = mxi + b. The slopes and the constant are often calculated using multiple linear regression (MLR) which is analogous with regular linear regression when there is just one independent variable. In constructing graph theoretical schemes to traditional QSAR methods, the graph theoretical approach involves (a rather small set of) structural or graph invariants.

The authors have developed a QSAR models to predict antibacterial activity of some quinolone derivatives. The negative logarithm of IC50 (logIC50) was used as the biological activity in QSAR studies 4.

Methodology: This methodology used is to transform the chemical structure in to its molecular graph. This can be done by depleting all the Carbon- hydrogen atom as well as hetro atom hydrogen bonds of chemical structure 5-7. In the present investigation, initially, we have used a set of distance based topological indices and physico-chemical parameter.

In addition, we also calculation the quality factor10Q, as the ratio of correlation coefficient (R) and the standard error of estimation (Se) i.e. Q= R/Se.

Finally, the cross-validation method was used to establish the predictive potential of our models.

Molecular Descriptor: The hydrophobic parameter logP and zero order average connectivity index descriptors in MFA-qsar equation specify the regions of different compounds in the training set, leading to either an increase or decrease in activities.

RESULT AND DISCUSSION: The basic qunolone pharmacophore used in the present studies is shown in table 1. 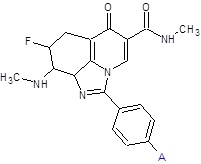 TABLE1: STRUCTURE OF COMPOUNDS MOLECULAR DESCRIPTORS AND THEIR ACTIVITY

The correlation matrix as recorded in table 2 is important in the sense that it represents inter relationship between the observed value of the variable on one side and its estimated value expressed in terms of the dependent variables on the other.

This tables show that biparametric model involving pair is good. The numbers accompanying descriptors in the equation represent their positions in three-dimensional MFA grid (fig. 1).We have carried out stepwise multiple regression analysis for modeling of compound 7.

FIG. 1:  ALIGNMENT OF THE USED IN TRAINING SET

In order to confirm the above-mentioned finding, we have estimated Q-value and observed that it is highest for model. At this stage, It is interesting to comments an adjustable R2 ( ) Coefficients. It takes into accounts of adjustment of R2 therefore If a variable is added that does not contribute its fair share, the  will actually decline. If  always increases then an independent variable is added. On other side  will decreases, this means the added variable does not reduce the unexplained variation enough to offset the loss of degrees of freedom. In our case,  value increases with increasing number of parameters. This indicates that the new parameters have a fair share in the proposed model.Further support in out favors in obtained by estimating IC50 and compares the same with observed IC50 value.

Such a comparison is demonstrated in table 3. We observed that the estimated value is very close to theobserved values.

The most active molecule no. 7 was used for MFA model. A common substructure-based alignment was adopted in the present study, which attempted to align molecules to the template molecule on a common backbone.

Finally, we have plotted a graph between observed and calculated value, which yielded predictive correlation co-efficient (fig. 2). 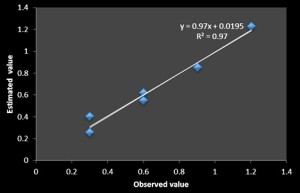 CONCLUSION: On the basis of above observations, it leads to the conclusion that the activity log IC50 of the present set of compounds can be successfully modeled using molecular descriptors. It was also observed that out of the molecular descriptors used logP and   are most useful for this purpose.The best prooduced model is a bi-parametric regression equation with very good statistical fit good predictive power as evident from its  =0.9700,  =0.9692,SPRESS=7.8631 values.The highest value of  and   and lowest value of SPRESS gave further support to our finding.The MFA equation suggested that (-ve)sign of both descriptors are disfavour the activity.Our results  open very interesting perspectives regarding quinolone derivatives with antibacterial activity.