Institute of Genetic Engineering and Biotechnology for Postgraduate Studies / University of Baghdad, Iraq.

ABSTRACT: Acinetobacter baumanniiis typically coccobacillus Gram-Negative bacterium, resists almost all antibiotics in use. Synthetic antimicrobial peptides (AMPs) against this bacterium were designed with the aid of computational software and databases to be with the accepted models. Antimicrobial peptides (AMPs) might be the candidate solution for the this problems. Four peptides designated MY1, MY2, MY3 and MY4 were synthesized with length 11-14 amino acids, they were rich in Arginine and Tryptophan. The MICs of the peptides against colistin sensitive A. baumannii were 2.4, 6.2, 6.9, 6.6 µg/ml (mean for 10 strains) respectively vs Mastoparan as control was 10.4 µg/ml, whereas the MICs of peptides against colistin resistant A. baumannii were 3.8, 6.2, 6.8, 6.4 µg/ml (mean for 10 strains) respectively vs Mastoparan 13.6 µg/ml. The designed peptides showed no hemolytic activity at effective MICs. The practical calculated Therapeutic Index were 141.7, 67.7, 60.9, 77.3 vs 7.7 for Mastoparan (Colistin sensitive strains) and for resistant strains were 89.5, 67.7, 61.8, 79.7 vs Mastoparan 5.9.

INTRODUCTION: Acinetobacter baumannii is typically coccobacillus Gram-Negative bacterium, highly resistant to antibiotics and other antimicrobial agents, some strains of this bacterium resist all antibiotics have been reported, in addition to the resistance to many hostile environments such as desiccation. This emerging resistance is supported by uncanny ability of A. baumannii to survive a hospital and other environments 1, and is commonly isolated from wounds of soldiers from Iraq and Afghanistan, therefore it has been called Iraqibacter 2.

It has been designated as Red Alert human pathogen and encompassed in ESKAPE group according to CDC (Center of Disease Control) 3. Over the last years, the rapid emergence of multi-drug resistant pathogens has become a global concern, and emphasized the shortcomings in antibiotic drug development which has promoted the search for alternative antibacterial agents 4.

Antimicrobial peptides (AMPs) might be the candidate solution for the above problems, for their ability and specificity to kill the target pathogens, while sparing the commensal microorganisms 5. AMPs are ubiquitous elements of the innate immune response in a variety of organisms, and most of them included in different databases 6. They are generally comprising from 10-50 amino acids, and share a cationic character due to prevalence of basic residues, and an amphipathic structure in membrane –mimicking environments 7.

Their mechanism of antibacterial action is largely due to electrostatic interactions with anionic moieties of the microbial cell membranes leading to disintegration/ perturbation of cell membrane resulting in cell death 6, 8, they are less likely to induce resistance in microbes 9. Three model of actions were suggested, barrel-stave, carpet model and toroidal-pore model in addition to other mechanisms 10, their mechanisms are completely different from the action of common antibiotics 4. Despite their great potentials, AMPs have several drawbacks that limits their clinical utility, including hemolytic activity 11, rapid turnover in human body 12, deactivation by high salt concertation 13, and high cost of production14. But computational tools may improve the design or create novel AMPs 5.

Aim: The aim of this work was to design AMPs active against A. baumannii strains either sensitive or resistant to colistin, as the latter is the choice for this bacterium treatments

Bacterial Strains: Different stains of Acinetobacter baumannii were isolated and their antibiogram was estimated from previous study 15, with special emphasis on colistin.

(http://www.camp.bicnirrh.res.in/predict, used to find some properties of the peptides 16.

(http://crdd.osdd.net/raghava/cellppd/index.htm) used to estimate the penetration of peptides 17.

(http://crdd.osdd.net/raghava/toxinpred/design) 18, to estimate the toxicity and other physiochemical properties.

Therapeutic Index: This was done by calculating the ratio of MIC: Hemolytic Activity 22.

RESULTS AND DISCUSSION: In this study different strains of Acinetobacter baumannii (50 strains) were used and were resist different antibiotics 15. Strains were divided into two groups, the first sensitive to colistin and the second resist to colistin. As the high resistance of A. baumannii, it has been termed as the Gram –Negative MRSA, and has all levels of resistance, i.e., Multi, Extensively and Pan-drug resistance (MDR, XDR, PDR) due to high ability of natural genetic transformation 23.

Colistin (Polymyxin E) is a positively charged antimicrobial peptide, targets the anionic LPS molecules in the outer cell membranes of Gram –Negative bacteria, leading to interactions between the inner and outer membranes, with associated lipid exchange, membrane disturbance, osmotic instability, and eventual cell death 1. The cationic AMPs act primarily by disturbing the cell membranes and share a similar structures and charged profile with polymyxins, so it may provide an alternative treatment, but XDR strains were emerged and were found to be resist to colistin 1, 24. Colistin considered as the last option to treat infection with A. baumannii in spite of its nephrotoxic effects. Electrostatic forces mediate the initial interactions between cationic colistin and Gram-Negative bacterial cells, and loss of LPS mediates colistin resistance in some A. baumannii strains, which could be reflected as a differences in Zeta potentials that impact the electrostatic interactions 24.

Designing of peptides: At first step, mini database was constructed using conventional databases and literatures, this mini database contains the AMPs against the Gram Negative Acinetobacter (Supplement 1). Four AMPs were designed in this study, shown in Table 1. 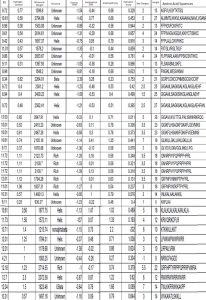 Mastoparan was chosen as it has the activity against colistin –susceptible and colistin –resistant A. baumannii clinical isolates 25. The designed peptides were short to mitigate the production costs. These peptides were modified by amidation and acetylation to increase their stability, as it is known that amidated peptides exhibit higher antimicrobial activities, but also be hemolytic more than that of natural AMPs. However, the C-terminal amidation stabilizes amphipathic helix formation upon binding to the membrane bilayer leading to strong activity 26, 27. Fig. 1 shows some characters of the designed AMPs. 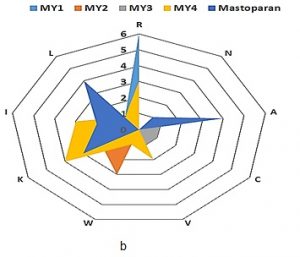 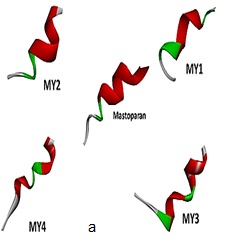 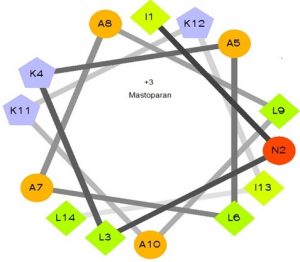 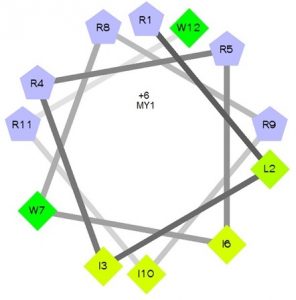 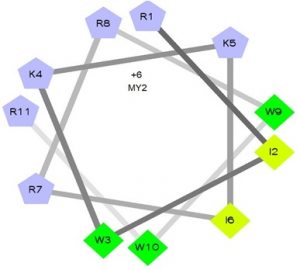 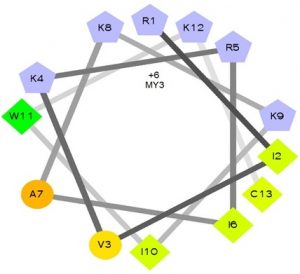 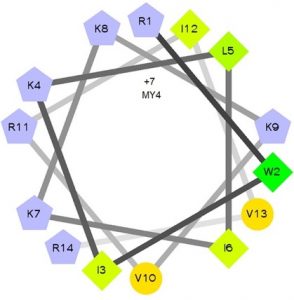 The other measured characters of the peptides are shown in Fig. 2. 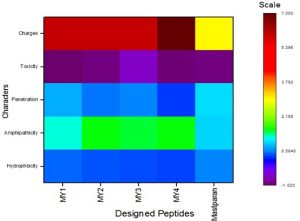 FIG. 2: SOME CHARACTERS OF THE DESIGNED PEPTIDES

The peptides were with different amphipathicity, hydrophobicity and so on. They were designed in the light of the currently accepted model for the mechanism of action of α-helical AMPs. Some parameters were considered during design: the length, cationicity, amphipathicity and helicity as each parameter is quite important for the activity which could be considered as multifactorial issue. For example, the α-helical peptides were found more effective in lysing membranes rich in anionic phospholipids. Amphipathicity plays an essential role in activity 1. The activity was measured as MIC against colistin sensitive strains is shown in Fig. 3a, and resist strains in Fig. 3b. 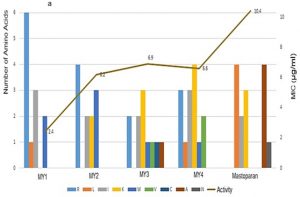 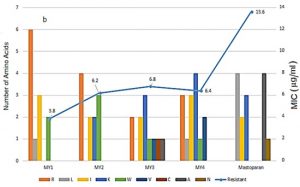 FIG. 3: (a) ACTIVITY OF DESIGNED PEPTIDES FOR SENSITIVE STRAINS, (b) RESISTANT STRAINS

It would be expected that the designed AMPs action followed the pore forming mechanism as the membrane surface coverage by many peptides at the MIC is estimated to be much lower than would be required for the carpet mechanism 28.

The problem for AMPs is the effect on host cells such as hemolysis of red blood cells (RBCs). The hemolytic activity of designed peptides is shown in Fig. 4. 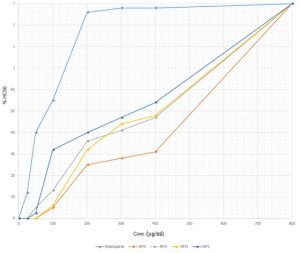 None of the peptides showed hemolytic activity at their MICs and were with no toxicity. Other characters of AMPs were studied in relation to hemolysis, most of them had no correlations, except the hydrophobicity as shown in Fig. 5. 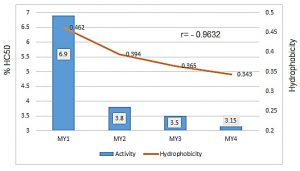 It was documented that hydrophobicity are positively correlated to hemolytic activity, the results of this study were in agreement with other for this approach 29.

The AMPs were designed to be polycationic with different amphipathicity and simple by manipulation the residues included, using repeated residues with alternating hydrophobic and positively charged residues with reduced hemolytic activity at antimicrobial concentrations. Screening of AMPs libraries showed that the highest levels of activities reordered to AMPs rich in Arginine and Tryptophan emphasizing the importance of these residues in AMPs.

Therefore the focusing during designing was on Arginine (R) and Tryptophan (W) as these residues represent a recurring theme among many AMPs and almost always play important roles for activity. Tryptophan has a strong preference for the interfacial region of the lipid bilayers and involved in protein folding 30, and represent the most suitable amino acid to enable the peptide's prolonged association with the membrane.

On the other hand, Arginine with its cationic charges provide an effective means of attracting the peptides to the target membranes and hydrogen bonding facilitates it interaction with negatively charged surfaces such as LPS and other molecules. It is effectively shielded from the highly hydrophobic nature of the bilayer by associating with tryptophan residues.

Overall, the cationic nature and unique hydrogen bonding geometry of Arginine and the complex properties of Tryptophan seem to complement each other well for the purposes of AMPs. So for their many advantageous properties, it appears that both Tryptophan and Arginine residues are exceedingly suitable to contribute to potent antimicrobial agents that eventually may be used for humans as it agreed with others 30.

The other important criterion in designing and choosing the AMPs is the Therapeutic Index (TI). The latter calculated by dividing the concentration of AMPs causes lysis of 50% of RBCs by MIC (See Materials and Methods). Fig. 6 shows this parameter for both colistin sensitive and colistin resistant strains compared to Mastoparan. 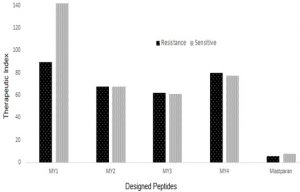 It is known that high Therapeutic Index is necessary for avoiding hemolysis of host cells 31.

CONCLUSION: The designed peptides seem promising for eradication of A. baumannii with different phenotypes, if it pass some tests.

ACKNOWLEDGEMENT: We thank everyone for assistance and for comments that greatly improved the manuscript.

Institute of Genetic Engineering and Biotechnology for Postgraduate Studies / University of Baghdad, Iraq.