ABSTRACT: One of the proposed groupings of the fluoroquinolones describes the excellent broad-spectrum activity forms an invaluable part of the present anti-infective armory of the clinicians. The fluoroquinolones are most significant weapons can be credited for saving more human lives than any other area of medicinal therapy. In this current research segment, the novel C-3 substituted fluoroquinolone scaffolds were designed, synthesized and elucidated by IR, H1NMR, and MS spectral data. The clinically banned drug gatifloxacin is acting as starting material used to obtain targeted compounds. The proposed scheme comprised of main cyclization by using phosphorous oxychloride, thiosemicarbazide, gatifloxacin. The former compounds were undergoing diazotization reaction followed by a coupling reaction with various tertiary amines. Further, all seven 3- substituted gatifloxacin derivatives (PGI-PGVII) were screened for antimicrobial and hypoglycemic activity. In the novel series of compounds PG III, PG IV, PG V exhibited good antimicrobial activity by inhibition of DNA gyrase enzyme whereas PG I, PG III, PG VI, PG VII were found to be the most active compounds with hypoglycemic activity.

INTRODUCTION: Fluoroquinolones have been gained stupendous importance during the last two decades because of their potent anti-bacterial activity against wide varieties of gram-positive, gram-negative, anaerobic and atypical micro-organism 1. A number of these compounds are today's blockbusters of the antimicrobial market due to their therapeutic efficacy and tolerable side effects, which is a vital key of an anti-infective empire.

The expanded use of β-lactam antibiotics brings with increasing concern for the development of microbial resistance. Hence, the fluoroquinolones captured the crown position in the fastest growing antibacterial class in terms of global revenue 2. It has been increasingly attending both the hospital and community sectors to treat a broad range of infection 3.

In the current scenario, fluoroquinolone research involved the number of potent synthetic analogs possessing bactericidal, broad-spectrum activity against many clinically important pathogens. The gatifloxacin is from the fourth generation of fluoroquinolone family have found the antibacterial activity through the inhibition of bacterial gyrase an enzyme which is involved in DNA replication, recombination and repair 4.

These are predominantly used for a variety of infections including urinary tract infections (UTI), gastrointestinal infections, respiratory tract infections (RTI), sexually transmitted diseases (STD) and skin infections 5. By recent notification, the Union health ministry of the US has banned the drugs having controversy related to clinical side effects viz. gatifloxacin. It bears a high risk of developing serious dysglycemia. Therefore; the US government has banned various formulations containing gatifloxacin like injection and tablet. As well as Union Health and Family Welfare Ministry of India on 18 March 2011 banned the manufacture, sale, and distribution of oral and injectable formulations gatifloxacin from the market.

According to the literature review, a possible mechanism is that gatifloxacin stimulates insulin release by blocking the ATP – sensitive potassium channels of pancreatic cells cause acute hypoglycemia. The continued treatment of gatifloxacin decreases islet insulin biosynthesis due to stimulating ATP- sensitive potassium channels of pancreatic cells leads to reduce insulin level, and chronic hyperglycemia will occur 8. Certain in-vitro experiments as well as post-marketing surveillance devoted that dysglycemia is more common with gatifloxacin than with other fluoroquinolones. The dysglycemia effect is observed in healthy volunteers and also in diabetic patients. This knowledge is helpful to synthesize new derivatives with a broader antibacterial spectrum, higher intrinsic activity to over all formulation with the minimum adverse effect. So, here we have planned to explore novel new seven (PG I - PG VII) gatifloxacin derivatives 9.

Chemistry: The synthesized compounds were purified by re-crystallization and percentage yield of all the compounds were calculated. The purified compounds were assigned for constant physical determination like melting point by open capillary method, Rf value by TLC. The spectral analysis like IR spectroscopy values were obtained (JASCO - FTIR 8400) by using KBr disk preparation method. The NMR spectroscopy was recorded (Bruker Advance III NaNoBay FT-NMR) by using CDCl3 as the solvent. MS spectroscopy (400 MHz) was done by using methanol as a solvent 10, 11.

Synthesis: The tertiary amine-based derivatives (PG I- PG VII) which were used as templates for the construction of gatifloxacin scaffolds shown in Fig. 1. In the scheme, compound I [1 cyclopropyl, 1-4 dihydro, 6 fluoros, 8 methoxy, 4 oxo, 7[3(methyl) piperazinyl], 2 amino Thiadiazole] was obtained from gatifloxacin with phosphorus oxychloride and thiosemicarbazide via cyclization mechanism. 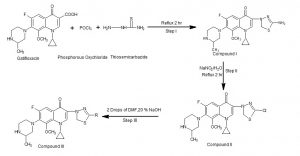 Step 2: Synthesis of 1 cyclopropyl, 1-4 dihydro, 6 fluoro, 8 methoxy, 4 oxo, 7[3(methyl) piperazinyl], 2-chloro Thiadiazole: Sodium nitrite, HCl and copper powder was mixed to Compound I and stirred for 2 h. This mixture was refluxed for one and half hour. Then this mixture was cooled and extracted with an equal quantity of chloroform by using separating funnel and separated the acid and aqueous layer after occasional shaking. Then sodium bicarbonate (83g, 1.0 mol) solution was mixed to aqueous layer till it became neutral. Further, this mixture was carried out for vacuum pump to remove excess sodium nitrite solution.

Step 3: Synthesis of 1 cyclopropyl, 1-4 dihydro, 6 fluoro, 8 methoxy, 4 oxo, 7[3(methyl) piperazinyl], 2-R Substituted Thiadiazole (PG I - PGVII): Equimolar quantity of amines and piperazines, 20% NaOH (5 ml, 39 g, and 1.0 mol), dimethyl formamide (2 drop, 73.09 g, 1.0 mol) was mixed to Compound II and refluxed for 4 hour. After cooling, this mixture was processed for neutralization by using 10% HCl and then this precipitate was dried, washed with water, dried again and recrystallized from dimethyl sulfoxide. The practical yield, melting point and TLC was carried out of derivatives 12-19.

Antimicrobial Activity: All derivatives of gatifloxacin were screened for antibacterial activity against gram positive: S. aureus and gram negative: E. coli by disc diffusion method. The paper discs were prepared by punching Whatman filter paper (no.01). The discs were then dipped in solutions containing synthesized drug at conc. 10 µg/ml and 50 µg/ml (DMSO). The standard drugs Ampicillin (10 µg/ml, 50 µg/ml in DMSO) were prepared and discs were dipped in respective solutions. The discs were removed from solutions by using sterile forceps and placed separately on petri-plates containing solid media. Then petri-plates were kept in refrigerator for 30 min. to allow proper drug diffusion. Further bacteria inoculated plates were incubated at 37 ºC for 24 h. The petri-plates were observed for zones of inhibition, which was reported in mm 20-22.

Hypoglycemic Activity: The Albino rats- Wistar strain were selected having 180- 250 gm weight. The rats were divided into 6 groups consisting of six animals in each group. Blood sugar level measured on day 0 (before administrating the drug). The respective control group was treated with normal saline, standard Gatifloxacin given to one group and the remaining seven test groups were treated with different seven derivatives for 4 days. The blood was withdrawn through the retro-orbital route. Then, blood sugar level was determined by using “ACCU CHECK R Glucometer” The elevation in blood glucose level was compared with drug ‘Gatifloxacin.’

CONCLUSION: The IR, H1- NMR, and Mass data for all the synthesized compounds studied to an anticipated structure. All the synthesized compounds were studied for antimicrobial and hypoglycemic activity. The PG–I, PG–III, PG –VI, PG–VII showed reduced blood glucose level. Bioactivity results supported that, presence of piperazine ring in the lead molecule is responsible for reduced glucose uptake. Thus, piperazine plays an important role to control the blood sugar level even after the 3rd day of administration of gatifloxacin. The antimicrobial screening of the compounds against E. coli and S. aureus highlighted the antibacterial spectrum of the novel compounds.

Amongst all synthesized compounds PG–IV against E. coli and PG–III against S. aureus exhibited remarkable antimicrobial activity as compared to standard Gatifloxacin.

CONFLICT OF INTEREST: The authors declare that they have no conflict of interests.