DESIGN, SYNTHESIS AND CYTOTOXIC ACTIVITY OF SOME NOVEL FLAVONES

DESIGN, SYNTHESIS AND CYTOTOXIC ACTIVITY OF SOME NOVEL FLAVONES

A series of flavones (5-15) weresynthesized from resorcinolvia Baker-Venkataraman transformation, characterized and evaluated for their cytotoxicity against human cervical cell line (HeLa) by MTT assay method. The result of preliminary MTT cytotoxicity studies shown that the compounds 5, 9 and 10 were found to be most potent against HeLa cells;  IC50 values were of 0.22, 0.88 and 1.26 µM respectively.

INTRODUCTION:A large number of biological effects have been attributed to these flavonoids, including anticancer 1-3, antifungal 4-5, antiviral 6-7, anti-inflammatory 8, antioxidant 8-9, anti-osteoporotic 10-11 and anti-carcinogenic activities 12. In this regard, a number of flavone derivatives have been synthesized and antitumor mechanisms have been investigated13-14.Many lines of evidence indicated that flavonoid compounds are able to inhibit proliferation of HeLa cells 15-16.

With this evidence, in this study we synthesized a series of new flavones derivatives with different substituents on the flavones structure and studied the structural activity relationship.

Chemistry: All the chemicals were obtained from commercial sources and used without further purification. Melting points were determined by the open capillary tube with electro thermal melting point apparatus and are uncorrected. The completion of the reaction and purity of the compounds were monitored by TLC. Infrared (IR) spectra were recorded for the compounds on JASCO 4100 FT-IR using KBr pellet disc technique. NMR spectra were recorded on a Bruker Advance spectrometer. The elemental analysis was performed using Perkin-Elmer model 240 C analyzer.

After 48h, 15µl of MTT (5mg/mL) in phosphate buffered saline (PBS) was added to each well and incubated at 37oC for 4h. The medium with MTT was then flicked off and the formed formazan crystals were solubilised in 100 µl of DMSO and then measured the absorbance at 570 nm using micro plate reader. The % cell inhibition was determined using the following formula and graph was plotted between percentage Cell inhibition and concentration and from this IC50 was calculated by using graph pad prism software.

Chemistry: Compounds 5-15 were synthesized using the scheme 1. The structures of compounds were confirmed by IR, NMR and Mass spectral data’s.  Resacetophenone (Compound 1) was synthesised by adding the resorcinol to the heating mixture of glacial acetic acid and zinc chloride kept at 120oC, then temperature was raised 142oC for 20 minutes. The flavones 4 was prepared from the resacetophenone (1) bythe most common method of synthesizing flavones is known as the Baker-Venkataraman transformation. 11 aliphatic/ aryl acyl derivatives of flavones (5-15, Scheme-1) were prepared from corresponding acyl chlorides through shown in Scheme-I. 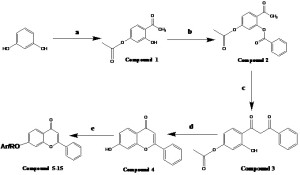 The compound 1 was stirred with benzoyl chloride in pyridine afforded the 2-acetyl-5-hydroxy phenyl benzoate 2. Compound 2 was heated to 50oC with pyridine, to which pulverised KOH was added and stirred for 20 minutes at room temperature and neutralised with acetic acid to yield 1-(2, 4 dihydroxy phenyl)-3-phenyl propane-1, 3-dione (3) which was further treated with acetic acid and few drops of Conc. sulphuric acid and refluxed for 1.5 hrs with occasional stirring to form 7- hydroxyl Flavones (4).  Finally 7- hydroxyl flavones, treated with various acyl chlorides in pyridine so that 7-OH group is esterified (stirred at 0-5oC for 1-2hrs) to corresponding acyl derivatives (5-15) as a final compound of first series.

Physical and spectral data of synthesized compounds (5-15) are given in table 1 and 2.All the structures of newly synthesized compounds were assigned on the basis of their spectroscopic data, IR, 1H NMR and Mass. The lead compound 4 showed the absorption band at 3126 due to the presence of –OH at 7 position of flavonoid ring where as in ester derivatives 5-15 this absorption bands were absent in this region instead the absorption bands were appeared at 1749 by C=O, this slightly higher than that the normal ester C=O stretch 1740 because of the phenyl conjugation with alcohol oxygen. Peak at 1238 also indicated the presence of C-O stretch of (C (=O)-O). Compounds  10 and 11 were also shown the peaks in this region  along with additional band at 1518-1462 cm-1 due to C=N aryl stretch.  The 1H NMR spectrum, compounds 9 and 14 showed the broad singlet signals at 3.308 ppm, which were assigned to the N–H protons of amino group.  Phenolic -OH proton of compound 13 and 14 exhibited singlets at10.584 ppm. Compound 6 ethenyl proton adjacent to C=O (=CH (C=O) exhibited singlet at 12.286 ppm. Compound 15, -CH3 showed the singlet at 1.24 ppm.

The obtained molecular ion m/z values of the final flavonoid derivatives were consistent with the molecular weight of the compounds and base peak due to cleavage of [C8H7] +• at m/z= 103 and another  intense peaks at  m/z 146 due to  fragmentation  from base peak  with relative intensity of  58 %. 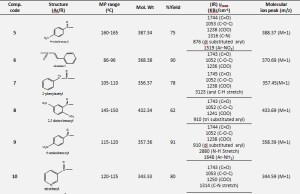 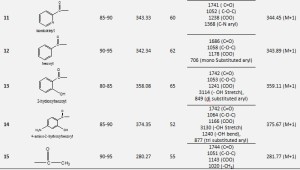 In-vitro cytotoxicity: The synthesized flavone derivatives 5-15, were evaluated for anti-proliferative activities against human cancer cell line HeLa by screening by MTT assay.  The results were summarized in Table 3. All the compounds showed anti-proliferative activities against the Hela cell line with the half maximal inhibitory concentration (IC50) values of 0.22–1.81 µM.  Structure–activity relationship (SAR) analysis indicated that compounds bearing p-nitrobenzoyl, p-aminobenzoyl and nicotinoyl at 7th position of flavone ring played an important role for the activityof the compounds 5, 9 and 10 with the IC50 values of 0.22, 0.88 and 1.26 µM respectively.  It is clear from the results that the anti cancer potential of compounds associated with the nature substituent at the 7th position of flavones ring.

In future there is wide scope of modifications are possible for flavone , chemical modification and SAR studies can lead to more potent and highly active compounds.