ABSTRACT: Substituted triazoles have received considerable attention during the last two decades as they are endowed with a variety of biological activities and have a wide range of therapeutic properties. The present work is concerned with the synthesis of fused 1, 2, 4-triazole derivatives with the objective of discovering novel and potent anti-tubercular agents that might be devoid of harmful side effects. 1-[amino (isonicotinoyl) carbonohydrazonoyl] guanidine (I) was prepared from isoniazide and cyanoguanidine and was cyclized to 2-(3-pyridin-4-yl-1H-1,2,4-triazol-5-yl) guanidine (II) which was further converted into amino triazolo triazine derivatives (IIIa-g) by refluxing with the appropriately substituted benzaldehydes. The final compounds 10-substituted-2-(pyridin-4-yl)-6,10-dihydro-5H-pyrimido[2,d] [1,2,4] triazolo[1,5-a] [1,3,5] triazine-6-carboxylic acid (IVa-g) were obtained by refluxing  different amino triazolo triazine derivatives (IIIa-g) with formaldehyde and sodium pyruvate in presence of HCl in methanolic medium. The newly synthesized compounds were screened for their antitubercular activity using a microplate alamar blue assay method and characterized on the basis of IR, 1HNMR and Mass spectral studies.

INTRODUCTION: Tuberculosis (TB) 1-2 is an infection caused by the bacterium Mycobacterium tuberculosis. TB most commonly occurs in the lungs but can sometimes also affect other organs, including the skin, bones, lymph nodes, liver, digestive tract and central nervous system (brain and spinal cord). Tissue response in tuberculosis is a classical example of chronic granulomatous inflammation in humans.

Tuberculosis is a leading cause of infectious disease mortality in the world. In the past 25-28 years, the incidence of microbial infection has increased on alarming levels over the world as a result of microbial resistance it is because of an increase in the number of patients suffering from TB worldwide. Approximately 32% of the world population is infected with Mycobacterium Tuberculosis. HIV positive patients are more susceptible to Mycobacterium tuberculosis with a fifty-fold risk increase over HIV negative patients.

The rate of the progression of the latent TB to active disease in HIV positive patients is higher than non HIV infected individuals. An additional concern is a rise in multi-drug resistance.

A growing number of immune-compromised patients are as a result of cancer therapy, organ transplantation and HIV infections which are the measure factors contributing to this increase.

The health problems demand to search and synthesize a new class of anti-microbial compounds effective against pathogenic microorganisms that developed resistance to the drugs used in the therapy. The therapeutic importance of 1, 2, 4- triazoles 3-5 is well documented. 1, 2, 4-triazoles and N-bridged heterocyclics derived from them are found to be associated with diverse pharmacological activities. Substituted 1, 2, 4- triazoles are among the various heterocycles that have received the most attention during the last two decades as a potential anti-microbial agent. Substituted 1, 2, 4-triazoles and its derivatives have been reported to possess a wide spectrum of activities ranging from anti-bacterial, anti-inflammatory, anti-convulsant, anti-neoplastic, anti-malarial, anti-viral, anticancer, anti-tubercular, anti-proliferative. A literature survey 6-18 on 1, 2, 4-triazoles also revealed that apart from 1, 2, 4-triazole ring bis and poly heterocyclic compounds that contain triazoles ring or triazoles fused rings are used for the treatment of microbial infections. On the basis of the above-mentioned reports, the present work is concerned with the synthesis of fused 1, 2, 4-triazole derivatives with the objective of discovering novel and potent anti-tubercular agents that might be devoid of harmful side effects.

Chemistry: The starting compound 1-[amino (isonicotinoyl) carbonohydrazonoyl] guanidine (I) was prepared from isoniazide and cyanoguanidine upon refluxing for 6 h in presence of Conc. HCl in single step. The 1-[amino (isonicotinoyl) carbono-hydrazonoyl] guanidine (I) was cyclized to 2-(3-pyridin-4-yl-1H-1,2,4-triazol-5-yl) guanidine (II) by refluxing for 6 h in presence of 10% NaOH on water bath. The 2-(3-pyridin-4-yl-1H-1,2,4-triazol-5-yl) guanidine (II) was further converted into amino triazolo triazine derivatives (IIIa-g) by refluxing with the appropriately substituted benzaldehydes in the presence of piperidine in DMF medium for 4 h. 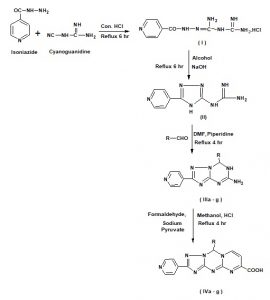 Anti-tubercular Activity: The antimycobacterial activity 20-21 of compounds was assessed against M. tuberculosis using microplate Alamar Blue assay (MABA). This methodology is non-toxic, uses a thermally stable reagent and shows good correlation with proportional and BACTEC radiometric methods. Briefly, 200 µl of sterile deionized water was added to all outer perimeter wells of sterile 96 wells plate to minimized evaporation of medium in the test wells during incubation. The 96 wells plate received 100 µl of the Middle brook 7H9 broth and serial dilutions of compounds were made directly on the plate. The final drug concentrations tested were 0.2 µg/ml to100 µg/ml. Antitubercular activity data are presented in Table 1. The data for the antitubercular activity screening revealed that all the compounds showed activity at 50 and 100 µg/ml. However, the data of the anti tubercular activity screening revealed that the compounds IVa, IVe and IVg exhibited activity against Mycobacterium tuberculosis strain to the level of 6.25µg/ml.

Experimental Section: Melting points were determined by using the Toshniwal apparatus in open capillaries and are uncorrected. The purity of the compounds was checked by TLC on silica gel G plates using chloroform: ethyl acetate (7:3) as a solvent system and U.V lamp used as a visualizing agent.IR spectra were recorded using KBr pellets on a Shimadzu 8000 series spectrophotometer. 1H-NMR spectra on a Varian EM-200, Avance 200 MHz spectrophotometer using DMSO-d6 as solvent and TMS as internal standard (chemical shift values expressed in ppm). LC-MS spectra were recorded on a Shimadzu 2010A series spectrometry.

10-substituted- 2- (pyridin-4-yl)-6, 10 dihydro5H pyrimido[2,1d][1,2,4]triazolo[1,5a][1,3,5]triazine-6-carboxylic acid. IVa-g: Into a clean dry round bottom flask introduced appropriate compound (0.01 mol) (IIIa-g) in methanol, sodium pyruvate (0.01 mol) and formaldehyde (0.01 mol). To the above mixture added 1ml of conc. HCl and the contents of the flask were refluxed for 4 h. Cooled and separated solid was collected by filtration. The obtained compounds (IVa-g) were recrystallized from methanol.

Micro Plate Alamar Blue Assay (MABA): Anti-TB susceptibility testing was performed in black, clear bottomed, 96-well microplates in order to minimize background fluorescence. Initial drug dilution was prepared in dimethyl sulfoxide and subsequent two-fold dilutions were performed in 0.1 ml of 7H12 media in the microplates. The H37 Rv was diluted in 7H9 media to reach approximately 2 × 105 cfu/ml and 0.1 ml was added to wells. Wells containing compounds only were used to detect autofluorescence of the compounds. Plates were incubated at 37 ºC. At day 7 of incubation, 20 μl of Almar Blue solution and 12.5 ml of 20% Tween 80 were added to all the wells and the plates were re-incubated at 37 ºC for 24 h. Blue color in the well was interpreted as no bacterial growth, and pink color was scored as growth. The MIC was defined as the lowest drug concentration which prevented the color change from blue to pink. The results of the anti-tubercular activity were tabulated in Table 3.

CONCLUSION: The data for the antitubercular activity screening revealed that all the compounds showed activity at 50 and 100 µg/ml. However, the data of the anti tubercular activity screening revealed that the compounds IVa, IVe and IVg exhibited activity against Mycobacterium tuberculosis strain to the level of 6.25µg/ml. The possible improvements in the activity may be further achieved by modification in the substituents on the basic triazole nucleus as well as in the substituent on the triazine nucleus.

ACKNOWLEDGEMENT: Authors are thankful to the management of G. Pulla Reddy College of Pharmacy for providing the facilities to do the research work. We also thank Martha Mandals Institute of dental Sciences, Belgaum for the Anti tubercular biological studies.

CONFLICTS OF INTEREST: The authors declare that there is no conflict of interests regarding the publication of this article.