DESIGN, SYNTHESIS AND EVALUATION OF ANTITUBERCULAR ACTIVITY OF AMINO AZETIDINONES FROM ISONIAZID

DESIGN, SYNTHESIS AND EVALUATION OF ANTITUBERCULAR ACTIVITY OF AMINO AZETIDINONES FROM ISONIAZID

ABSTRACT: Azetidin-2-one analogues are reported to exhibit various pharmacological activities like cholesterol absorption inhibitory activity, human tryptase, thrombin and chymase inhibitory activity, vasopressin V1a antagonist activity, antidiabetic, anti-inflammatory, antiparkinsonian and anti-HIV activity in addition to antimicrobial.1-6  In the present study, Isoniazid (INH), the established antitubercular drug was selected as the lead for the design and development of antitubercular agents with minimal toxic effects. A novel series of amino azetidinones were designed from corresponding azetidin-2-ones using various in silico methods. Docking studies were performed at Mtb enoyl acp reductase (4DRE) and the derivatives exhibited best docking scores were prepared from corresponding azetidin-2-ones by treating with various molecules containing amino groups in the presence of TEA. Azetidin-2-ones in turn were obtained from a series of INH Schiff bases by reaction with chloro acetyl chloride. Structures of the newly synthesized compounds were assigned on the basis of elemental analysis, IR, 1H NMR, 13CNMR and mass spectral studies. The newly synthesized compounds were screened for their in vitro antitubercular activity using Alamar blue assay method and the hepatotoxicity was determined by MTT assay method using chang liver cells. AAZ1V, the amino azetidinone obtained from N-[3-chloro-2-(4-chlorophenyl)-4-oxoazetidin-1-yl] pyridine-4-carboxamide (AZ1V) by combining with 4- amino 1, 2, 4-triazole produced significant antitubercular activity. The percentage viability produced by AAZ1V against Chang liver cells for hepatotoxicity was better than the percentage viability produced by INH

INTRODUCTION: The synthesis of heterocyclic compounds has always drawn the attention of chemists over the years mainly because of their biological properties. Compounds classified as heterocyclic probably constitute the largest and most varied family of organic compounds. 7

One such heterocyclic, 2-azetidinone, the 2-carbonyl derivatives of the 4-membered heterocyclic compounds containing nitrogen is aimed to evaluate new products that possess interesting biological activities.

Drug discovery based on the existing lead molecules by modification of functional groups is a common strategy. A number of already existing drugs have been structurally modified for improving the activity, to reduce the side effects or in some cases to make the compound devoid of any unwanted effect. Moreover, introducing two or more established rings in a single molecule for a combined effect is also tried. 8

Isoniazid (Isonicotinic acid hydrazide) is the most commonly used drug for active infection and prophylaxis since its introduction for treatment of TB in 1952. Isoniazid is a prodrug that is activated by Kat G, the mycobacterial catalase-peroxidase. The activated form of isoniazid forms a covalent complex with an acyl carrier protein (AcpM) and Kas A, a beta-ketoacyl carrier protein synthetase, which blocks mycolic acid synthesis. 9 Enzymatic acetylation of INH in human beings greatly reduces its therapeutic activity resulting in under dosing, decreased bioavailability and acquired INH resistance. Chemical modification of INH with a functional group that blocks acetylation, while maintaining strong antimycobacterial action, may improve clinical outcomes and help to reduce the rise of INH resistance.

Hepatotoxicity refers to liver dysfunction or liver damage that is associated with an overload of drugs or xenobiotics.10 The three key antituberculosis drugs, isoniazid, pyrazinamide and rifampicin are potentially hepatotoxic. A Meta analysis has shown an incidence rate of liver toxicity of 2.6% with isoniazid. With the changing demographics and clinical characteristics of tuberculosis patients in many parts of the world, hepatotoxicity is of increasing concern in the treatment of this disease.

Tuberculosis (TB) is a chronic disease caused by Mycobacterium tuberculosis which has been threatening the man kind since ages. TB remains a major global health problem, responsible for ill health among millions of people each year.  According to the latest estimates included in the WHO report 2015, there were 9.6 million incidental TB cases in 2014. 11

In the present work, modification of INH by introducing 2-azetidinone ring followed by introduction of various rings by aminoalkylation and thus blocking acetylation to develop a better antitubercular drug with minimal hepatotoxic effect is aimed.

In silico molecular modeling studies were carried out on various softwares like Schrodinger suite Maestro v 9.3, ACD/Chem Sketch Free version 12.0 and Molinspiration. The chemicals were of AR and LR grade and were obtained from Merck, Hi-Media, Nice and Sigma-Aldrich. All the chemicals were dried and purified wherever necessary.

The protein structure of Mtb Enoyl-ACP reductase was obtained from PDB using their specific PDB ID (4DRE) was prepared using the protein preparation wizard in the Schrodinger software graphical user interface Maestro v9.3. Amino azetidin-2-ones derivatives of INH were selected as ligands and their structures were drawn using the workspace of Maestro and were converted to 3D form for the docking studies. The collected ligands were prepared for docking. Then the prepared ligands were docked into the generated grid in the prepared protein. The best docked pose with lowest Glide score value was recorded for each ligand. Extra precision (XP) was performed using the module Induced Fit Docking of Schrödinger- Maestro v9.3 (2012). Glide scores of designed analogues of azetidinones and aminoazetidinone of INH are given in (Table 3 and 4). Best derivatives with good docking scores were selected and their ADME properties were checked using QIKPROP tool available in Schrodinger under Maestro (Table 5). 12 The Lipinski’s rule of five (Table1) and drug likeness analysis (Table 2) of selected derivatives was also calculated.

The strategy used in the synthesis of the title compounds is outlined in Scheme (Fig. 1).

Synthesis of Schiff base (SB1-SBX):

To a solution of isoniazid (0.01mol) in ethanol, substituted aromatic aldehyde (0.01mol) in ethanol was added slowly with constant stirring.Then catalytic amount of glacial acetic acid was added to it and refluxed for 5-6 h. The resulting reaction mixture after cooling was poured into ice cold water. The Schiff base obtained was filtered, dried and recrystallised from ethanol. Yield and melting points were determined.The procedure was repeated with various aldehydes to obtain compounds SB1-SBX. 13

A mixture of Schiff base (0.01mol) and triethylamine (0.01mol) in dry 1, 4-dioxan (10 ml) was stirred well at 0--5°C temperature. To this mixture chloroacetyl chloride (0.01mol) was added drop wise for half an hour. The mixture was then shaken by a mechanical shaker at room temperature for additional 5 hours and then refluxed for 8-12h. The mixture was concentrated, cooled, poured into ice cold water. The product obtained was filtered, washed with cold water and then dried. The product was recrystallized from ethanol. This was repeated with remaining Schiff bases to obtain AZ1 to AZX. 14-15

Azetidinone from 4-chloro benzaldehyde (AZ1V, 0.01mol) and 4-amino-1, 2, 4-triazole (0.01mol) were separately dissolved in 1, 4- dioxan and mixed in a Round Bottom Flask (RBF). Then triethylamine (0.01mol) was added and the reaction mixture was refluxed for 4-6h. The reaction was monitored by TLC. The reaction mixture was then dumped in ice cold water and the precipitate was collected by suction and dried. The solid was recrystallised from rectified spirit. This was repeated with the same azetidinone and using various primary amines to obtain AAZ1-AAZX. 16

Selected azetidinone and amino azetidinone analogues which exhibited best docking scores from each class were screened for antitubercular activity using Middlebrook 7H9 medium by microplate alamar blue assay (MABA) method. Mycobacterium tuberculosis H37Rv strain was used as the test organism. Each INH derivative was tested in a final concentration of 0.8µg/ml to 100µg/ml and was compared with the parent drug INH in the same concentration range (Table 7). 17-19

The effect of modifications in the hepatotoxicity of INH was evaluated by in vitro hepatotoxic screening using one representative analogue from each group of derivatives and was compared with that of the parent drug INH. Chang liver cells were used and 3 different concentrations of INH and its analogues SB1V, AZ1V & AAZ1V at the concentrations of 10µg/ml, 50µg/ml and100µg/ml were tested. The % difference in viability was measured using standard MTT assay method after 24hrs. Optical density was read at 540nm using DMSO as blank and percentage viability was calculated (Graph 1). 20-22 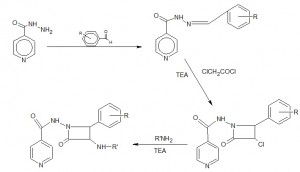 Docking studies performed with the INH azetidinones showed that the one containing 4-chloro benzaldehyde (AZ1V) produced the best binding and was identified as the lead molecule in the azetidinone series. Hence to improve the binding interaction lead optimization was performed by exploring the azetidinone ring by incorporating other ring systems and by converting into amino azetidinones by combining with various primary and secondary amines. Some of the amino azetidinones showed tremendous binding affinity than the lead molecule itself. 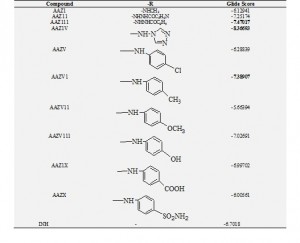 In the Amino azetidinone series AAZ1V, the derivative obtained by incorporating amino triazole into the azetidinone ring of AZ1V shows better docking interaction with energy of -8.367. Docking image (Fig.2) and ligand interaction (Fig.3) of AAZ1V with 4DRE are given below. 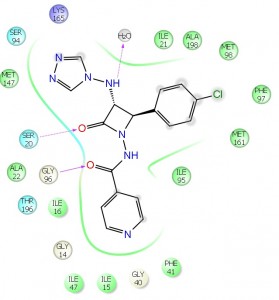 Antitubercular activity of selected analogues of INH showed comparable activity with that of the parent drug INH. Schiff base (SB1V), azetidinone (AZ1V) and three amino azetidinones (AAZ111, AAZ1V and AAZV1) were screened for their sensitivity and compared with INH and with 3 other standard drugs. The Schiff base derivative SB1V was sensitive at 6. 25µg/ml while the azetidinone derivative AZ1V exhibited antitubercular activity at 12.5µg/ml. Among the three amino azetidinone analogues screened, AAZ1V, the one containing 4-amino 1, 2, 4-triazole exhibited comparable antitubercular activity (sensitive at 3.12μg/ml) with that of INH. AAZ111 with benzoyl hydrazine and AAZV1containing methyl aniline were effective at 6.25µg/ml and12.5μg/ml respectively. 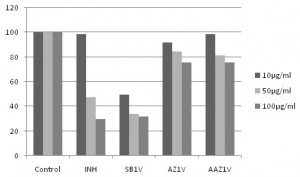 The in vitro hepatotoxic potential of the derivatives determined by assessing the cytotoxicity using Chang liver cells by MTT assay method at the concentrations 10 µg/ml, 50µg/ml and 100µg/ml exhibited dose dependent toxicity.

The morphological analysis of the cells treated with derivatives like AZ and AAZ shows less membrane damage and cell death at low concentrations; only at higher concentrations they are showing some cells with membrane blebbing and detachment. The azetidinone (AZ1V) and amino azetidinone (AAZ1V) derivatives give comparatively better results. Even at concentrations 100µg/ml, the percentage viability is above 75% for both AZ1V and AAZ1V, which is very good in comparison with the percentage viability of INH at 50µg/ml and 100µg/ml.

CONCLUSION: The present work was focused on the rational approach in designing and development of derivatives of well known antitubercular drug isoniazid not only as a mode to improve its antitubercular activity but also to minimize other problems associated with INH therapy. A series of INH azetidin-2-ones and respective amino azetidinone derivatives were subjected to preliminary in silico designing and  docking studies of the designed derivatives   were performed using Schrodinger. Among the fifteen INH azetidinones docked at the active site of enoyl acp reductase (PDB ID: 4DRE) to study antitubercular effect, the one containing chlorine (from 4-Cl benzaldehyde) showed better docking score and hence N-[3-chloro-2-(4-chlorophenyl)-4-oxoazetidin – 1 - yl] pyridine-4-carboxamide (AZ1V) was used for the development of amino azeidinones.

The in vitro hepatotoxic potential determination by MTT assay exhibited dose dependent toxicity. The azetidinone (AZ1V) and amino azetidinone (AAZ1V) derivatives give comparatively better results. Even at concentrations 100µg/ml, the percentage viability is above 75% for both AZ1V and AAZ1V, which is very good in comparison with the percentage viability of INH at 50µg/ml and 100µg/ml. Therefore the present research work ascertains the findings of in silico studies. The antitubercular profile and the pharmacological studies conducted indicate the relevance of the work and these derivatives containing azetidinone and triazole moieties need further attention for molecular manipulation.

ACKNOWLEDGEMENTS: This work was financially supported by the AICTE under MODROB’s scheme. The in silico studies and synthetic work were performed at DPS, Puthuppally, Kottayam. The authors express gratitude to all staffs of Maratha Mandal’s NGH Institute of Dental Sciences & Research Centre, Belgaum for antitubercular studies conducted. The authors are thankful to IIRBS & School of Environmental science, Mahatma Gandhi University, Kottayam for carrying out the spectral analysis.