Pyrimidine is a six membered cyclic compound containing 4 carbon and 2 nitrogen atoms and is pharmacologically inactive but its synthetic derivatives possess an important role in modern medicine. Pyrimidines and their derivatives are considered to be important for drugs and agricultural chemicals. Pyrimidine derivatives possess several interesting biological activities such as antimicrobial, antitumor and antihypertensive activities. Many pyrimidine derivatives are used for thyroid drugs and leukemia. The biological significance of the pyrimidine derivatives has promoted us to synthesize some new substituted dihydropyrimidines, and evaluate them for their anti-microbial activity. The titled compounds were identified and characterized by IR and 1HNMR analysis.

INTRODUCTION: Pyrimidine is the basic nucleus in DNA & RNA, it has been found to be associated with diverse biological activities. The presence of a pyrimidine ring in thymine, cytosine and uracil, which are the essential building blocks of nucleic acids, DNA and RNA is one of the possible reasons for their activities. Vitamins are essential for body. Pyrimidine ring is found in vitamins like riboflavin, thiamine and folic acid.

Inspired from these observations, it was planned to synthesize some maleic anhydride substituted pyrimidine derivatives and evaluate their antimicrobial activity.

MATERIALS AND METHODS: All the solvents and reagents were of laboratory grade. The melting points of the titled compounds were determined by open capillary method and were uncorrected. The purity of the compounds was checked by thin layer chromatography. The infrared analysis was carried out by JASCO 4100 FT IR using KBr pellet disc technique 7. 1H-NMR was recorded on a Brucker 500MHz spectrometer using tetramethylsilane as standard 8. The chemical shifts were recorded in parts per million (ppm).

The synthesized compounds were dissolved in dimethyl sulfoxide to a final concentration of 100µg/ml. The sterile discs (6mm in diameter) were impregnated with 10µg of the sample and test against microbial cultures. Ciprofloxacin (10µg/ml) disc was used as positive reference standard for antibacterial activity 9. All petriplates were incubated at 37oC for 24hours. After incubation, diameter of inhibition was measured. 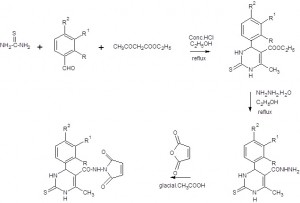 Cotrimazole (10µg/ml) was used as positive reference standard for antifungal activity 10. All petriplates were incubated at 27oC for 72 hours. After incubation, diameter of zone of inhibition was measured.

RESULTS AND DISCUSSION: The spectral data and antimicrobial studies data are given in table 1 and 2 respectively

CONCLUSION: The present study describes the synthesis of novel dihydropyrimidine derivatives via Biginelli reaction and evaluation for antimicrobial activity. The purity of the titled compounds was checked using melting point and thin layer chromatography. The structures of the compounds were assigned based upon the spectral data. The IR and 1HNMR data showed that the compounds were found to have the expected peak signal. The antimicrobial studies showed that the titled compounds have moderate antibacterial activity and a good pronounced antifungal activity.