INTRODUCTION: In pharmaceutical formulation technology, there are various drugs, including the newly discovered drugs, which have greater therapeutic efficiency but are still recognized as poorly aqueous soluble drugs leading to incomplete absorption and giving low bioavailability 1. In such cases, solubility is the main criteria that limits the potential of such drugs.

The drugs which are poorly soluble causes a failure of the formulation during development processes. Poor water solubility and low dissolution rate profile of the drug in aqueous G.T.T fluid leads to insufficient bioavailability.

For a drug to undergo complete absorption and have good bioavailability it must be dissolved in gastric fluids. Dissolution is a process that determines the degree and the rate of absorption of the drugs 5. Drugs having slow dissolution rates often show erratic and incomplete absorption, which causes bioavailability problems when they are administered orally. There numerous techniques available for improvement of aqueous solubility of the drugs like solid dispersion, melt granulation, direct compaction, solvent evaporation, salt formation, etc. 2 In these types of techniques carriers or polymers play a crucial role for improvement of solubility and dissolution rate. Sekiguchi and Obi discovered the concept of solid dispersion. Solid dispersion is a method in which hydrophobic drugs are dispersed in a fine state in hydrophilic carriers 6. The various carriers or polymers used for preparation of solid dispersions are β-cyclodextrin 7, 8, pyrolidone (PVP) 9, urea, mannitol, polyethylene glycols (PEG) 5, 10 etc.

Fluconazole is a drug mainly preferred to be given through oral routes, but the drug is poorly water-soluble limits the absorption by this route; hence it is necessary to enhance the solubility and dissolution rate for the proper pharmacokinetic profile. Fluconazole active ingredients a wide spectrum triazole antifungal medicinal active. It is used in the treatment of systemic candida infections as well as vulvovaginal, esophageal, and oropharyngeal candidiasis. Fluconazole is also used in treating meningitis caused by Cryptococcus neoformans. Solid dispersions of fluconazole are formed to increase the dissolution rate of a drug and solubility, thereby improving its oral bioavailability.

Solvent Evaporation Method: 11 Formulations of fluconazole solid dispersions were prepared using different carriers like PEG 4000 and PEG 6000 10, 9, 5 in various proportions, i.e., 1:1, 1:2, 1:3 (Drug: Carrier) as shown in Table 1. The drug and the carriers or polymers were dissolved in ethanol in a beaker. When the drug and the carrier dissolved completely, the mixture was poured on a Petri dish. The petri dish containing the mixture was placed in an oven at 60 °C until the solvent was removed completely. The solid dispersion obtained was sieved through # 60 sieve and stored inside the desiccator for further use.

Polymers were added to the mortar and pastel, and to this small quantity of ethanol were added during trituration to obtain good slurry-like consistency. To this slurry, then the drug is added slowly continued by trituration for an hour. The slurry obtained was then subjected to air-drying at 25 °C for 24 h. Pulverized and passed through the sieve # 100 and stored in a desiccator for further use.

Physical Appearance: 5 Fluconazole solid dispersions all batches were evaluated for appearance and color.

Percent Practical Yield (PY): 5 Percentage of practical yield was measured to know the accuracy or efficiency of the method. Also, to know the exact yield obtained from the batch of solid dispersion helpful in selecting an appropriate methods for production. The practical yield (PY) was calculated using the given equation.

Drug Content: 5 An amount equivalent to 25 mg of the drug was taken from different batches of solid dispersions, and each batch was dissolved separately in 25 ml methanol. The solutions were sonicated, filtered, and diluted further such that their absorbances fall within the standard calibration curve range. The absorbances of the solutions were determined at 261 nm by using UV - Spectrophotometer, Shimadzu, Japan.

Saturation Solubility: 15 An amount equivalent to 50 mg of plain fluconazole, dissolved in 25 ml, and 100 mg of solid dispersions were taken from different batches of solid dispersions, dissolved in 50 ml of different solvents like 0.1N HCl, Buffer pH 6.8 and water respectively in the flasks. These solutions were then sonicated for sometimes and kept for 48 h in a horizontal shaker with continuous starring. The saturated solution obtained was then filtered, diluted further, and analyzed using UV–vis Spectrophotometer, Shimadzu, Japan.

The samples withdrawn were then filtered using a Whatman filter paper no. 1 and analyzed at 261 nm by using UV–vis Spectrophotometer, Shimadzu, Japan. Cumulative percentages were calculated.

Fourier Transform Infrared Spectroscopy: 15 FTIR spectra of pure fluconazole, PEG 4000, and the selected sample of solid dispersion were recorded on IR, Bruker, India, and ATR pellet method. 10 mg of the solid dispersion was taken with 40-50 mg of ATR powder and filled within the pellets for scanning at range 4000 to 400 cm1.

Differential Scanning Calorimetry: 17 DSC analysis of plain Fluconazole, PEG 4000, and the selected sample of solid dispersion were performed using EX STAR DSC 6620 (Measurement and standard analysis software). Samples weighing 4 to 5 mg were heated in aluminum pans, which were hermetically sealed over a temperature range of 30-300 °C at a constant rate of 10°C/min under nitrogen stream.

X-Ray Powder Diffractometry: 17, 18 Thermogram were recorded during X-ray powder diffractometry process of plain fluconazole and the selected sample of solid dispersion using a Philips pan analytical XPERT-PRO diffractometer 1780 with CuK radiation. The scanning rate employed was 2°/min over the 4°–60° 2θ range. The patterns were collected with tube voltage 45 kV and the tube current 40mV in the step scan mode (step size: 0.0170; counting time: 29.8450 seconds per step).

Scanning Electron Microscopy: 17, 18 The plain fluconazole, PEG 4000, and a selected sample of solid dispersion were studied for shape and surface morphology by using scanning electron microscopy (SEM), JEOL, JSM 7600F, Tokyo, Japan. The samples were placed on double-sided adhesive tape secured on copper stubs and then were analyzed using the accelerating voltage of 5kV.

Compression of Solid Dispersion Tablets: 12 Tablet of fluconazole solid dispersions were prepared to weigh 400 mg each. The tablet was prepared using a selected sample of solid dispersion 1:1 ratio containing 100 mg of drug fluconazole and 100 mg polymer PEG 4000. Microcrystalline cellulose, crospovidone, aerosol, and magnesium stearate were used as the directly compressible diluent, super disintegrate, lubricant and glidant, respectively. All the ingredients were mixed together passed through a sieve and were compressed by the direct compression method using 12 mm punches employing rotary tablet press Cad Mach, Ahmedabad, India. The tablet hardness was kept between 5 to 6 kg/cm2. The prepared tablets were evaluated for drug release studies.

Bulk Density (Db): Bulk density is the total weight of the bulk powder measured by transferring the powder in a measuring cylinder and the initial volume of the powder is noted which is calculated using formula Db = M / Vb where Vb is the bulk volume of powder, M is the mass of powder. It is denoted in terms of g/ml.

Tapped Density (Dt): Tapped density is total mass of the powder obtained after tapping the powder 100 times. The tapped volume noted if less than 2% in the difference between the two volumes and if it is more than 2% tapping is done again for 200 times. It is calculated by using formula Dt = M / Vt Where, Vt is the tapped volume of the powder and M is the mass of powder. It is denoted by g/ml.

The Angle of Repose (Ɵ): The angle of repose (Ɵ) is used to measure the frictional force of the powder. It is calculated using the formula Ө = tan-1 (h / r) Where, “r” is the radius in cm and “h” is height in cm.

Hardness: Hardness in compression means the force required to break a tablet. The tablets hardness was determined using the Monsanto tablet hardness tester and expressed in terms of kg/cm2.

Thickness: The tablets were selected on a random basis from batches and a Vernier caliper was used to measure their thickness.

Friability: About 10-15 tablets were selected for Friability testing using Roche fibrillatory machine. The tablets were allowed to revolve for 50 times at 25 rpm subjected to both abrasion and shock in the chamber. After revolutions the tablets were removed, dusted using a muslin cloth and then weighed. This is calculated using the formula F = Initial weight – Final weight.

Stability Studies: 15 The stability testing studies were performed for optimized batch of formulation as per the ICH (International Conference on Harmonization) guidelines. The guidelines were followed for stability testing. The optimized batch of tablets were stored in aluminum foil, and the stability testing was carried for 3 months. According to ICH guidelines the temperature was kept 40 ºC ± 2 ºC and relative humidity of 75% RH ± 5%. The samples were tested after every one month and analyzed for changes like in its appearance and drug content. The changes observed were noted. 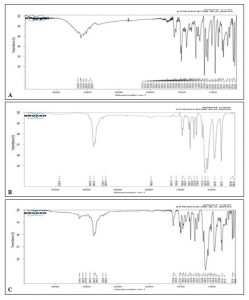 Differential Scanning Calorimetry: DSC studies were carried out for plain fluconazole and solid dispersion containing polymer PEG 4000 given in Fig. 4 indicated that fluconazole was homo-geneously distributed within the carrier in an amorphous state and no drug crystallized out of the dispersion suggesting that drug and polymer exist in the form of a mixture rather than the reaction product.

FIG. 5: XRD-POW FOR SOLID DISPERSION CONTAINING POLYMER PEG (A) AND PLAIN DRUG (B)

Scanning Electron Microscopy: The SEM study was performed for plain fluconazole, polymer PEG 4000, and solid dispersion of selected batch SE-Z1 for size and surface morphology, as shown in Fig. 6. The study revealed that pure fluconazole existed in form crystals, which were flat broken needles of different sizes. 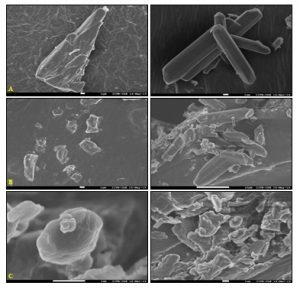 Evaluation of Post-compression Parameters: The developed formulation SE-Z1 batch of solid dispersion of fluconazole by solvent evaporation method was subjected to post-compression analysis, and the results are given in Table 9. 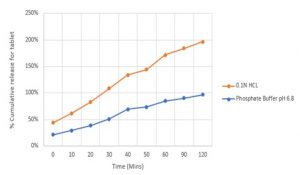 Stability Studies: The optimized batch of fluconazole solid dispersion were observed for stability parameters for three months. The formulation SE-Z1 subjected to stability testing every month stated that there were no such changes observed in the formulation's physical appearance and drug contents. The test results are shown in Table 11. Hence, it proved that formulation of fluconazole solid dispersion had good stability for 3 months.

CONCLUSION: The data obtained from all the studies stated that the solubility and dissolution rate of poorly water-soluble drug fluconazole improved by preparing solid dispersions. The solid dispersions were prepared by using different polymers, but PEG 4000 was found to be the best carrier to give maximum solubility. The solvent evaporation method gave the highest practical yield and drug content as compared to the kneading method. The formulation SE-Z1 showed maximum solubility and also an increase in dissolution rate as compared to the plain drug. Thus, tablets of fluconazole solid dispersions were successfully prepared. Stability studies proved that the formulation was found to be stable.

ACKNOWLEDGEMENT: Authors are thankful to the Department of Pharmaceutics, Dr. L. H. Hiranandani College of Pharmacy, Ulhasnagar, Maharashtra, India, for their help, motivation, suggestions, and encouragement for completing the work under their guidance.