ABSTRACT:Aims: Detection and isolation of restriction endonucleases like topoisomerase   Thermophilic Bacillus subtilus strain RC1. Methods and results: Topoisomerase like enzyme activity is detected from thermophilc Bacilus sp. The isolated enzyme is partially characterized. The molecular weight of the enzyme is ~ 33 KDa and the optimum temperature for the activity is 37 0C. The crude and gel purified enzyme activity were performed. The enzyme could be novel one, as the isolate is from hot water ecosystem. The restriction pattern of the new isolated enzyme is dissimilar to the commercially available enzymes. The enzyme retained the activity at a storage temperature of 4 0C about one to two months. Magnesium chloride is found to be essential for the activity. The enzyme activity pattern is like topoisomrase. Activity is enhance in presence of ATP. The further characterization of topo like enzyme is in contined.Conclusion: The endonuclease type of topoisomerase enzyme is detected and isolated from thermophilic Bacillus sp.The restriction pattern studies indicate that the enzyme cuts standard plasmid DNA. Significant impact of the study: The restriction enzyme which is isolated from thermophilic Bacillus sp. and this microorganism was isolated from hot spring ecosystem. So enzyme might be new restriction endonuclease and there are few reports from thermophilic microorganisms. Restriction endonucleases with specific site of action will be useful in genetic engineering studies.

INTRODUCTION: Nucleases are enzymes that break down nucleic acids into strands of DNA. 'Endo' or inside nucleases act at points along the strand and thus break DNA into short pieces. Endonucleases recognise a particular base sequence in DNA and cut the DNA. Some endonucleases cut the DNA at a specific point while others randomly split the DNA sequences. Specific endonucleases are used by genetic engineers who excise strands of DNA coded for a desirable genetic character.

Endonucleases are classed as 'Restriction enzymes' since they are employed e.g. by bacteria to restrict infection by viruses (bacteriophages).The bacterial restriction enzyme attack the DNA of the infecting microorganisms.

Topoisomerases belong to a family of highly conserved enzymes, which are found in all prokaryotes and eukaryotic cells. Topo role is essential in DNA topology 1

Purification of GidA protein, a novel toposiomerase II inhibitor was produced by Streptomyces flavoviridis which can exploited for rational drug design in huam carcinomas 2. Likewise other several inhibitor are reported from microbial species such as Streptomyces sp. LZ35 3.

There are several inhibitors for topoisomerase reported, one such using monoclonal antibodies supernants on topoisomerase I was reported using new ELISA plate based microtiter well assay for mycobacterial topoisomerase- I 7. Mycobacteria, topoisomerase-I activity using DNA as a substrate was performed in series of relaxation of negatively supercoil DNA with DNA binding and cleavage pattern was reported 8.

Recent work has shown that zinc finger protein (ZFPs) used as sequence specific tools. The attachment of Fok I nuclease to ZFPs and formation of fusion protein termed as zinc finger nucleases (ZFNs) for genetic manipulation to treat on function domain like transcriptional activators and repressors, used as therapeutical tools to treat human diseases 9 .

Restriction enzyme that follows the mechanism proposed for the type II enzyme utilizes the substrate at two sites more rapidly than that with one site. Many studies reveal that the DNA recognition is closely related to cleavage function of endonucleases. The structure and function related studies are carried out. Eco R1 and BamH1 lack of tight complementary interface which is formed by conformation changes in DNA or protein could influence their recognition and catalytic function. Eco RI endonuclease, protein-DNA complex was determined by Rosenberg 1991.

In 1986, Rosenberg first determined the crystal structure of EcoRI-DNA complex. FoK I is a type IIs restriction endonucleases, it requires two copies of its recognition sequence and cleaves at only one cleavage site. FoK I   has been reported for the TnSA protein of the Tn7 transposase. The DNA excision by the type IIF restriction endonucleasese SfI is reminiscent of a recombinase that catalyzed the cleavage of four strand. FoK I is monomeric protein with one active site and a single monomer covers the entire recognition sequence.

This paper describes potential of thermophilic Bacillus sp. which is isolated from the hot spring water of Western coast of Maharashtra and detection of topoisomerase like activity and production in mini scale is carried out.

Microorganism was isolated from the lonar lake water sample

Identification of the isolate:

DNA was isolated using the Sigma kit. The pure DNA was amplified using the bacterial universal primers. The amplified 16S rRNA gene was PAGE purified as per standard protocol. The purified DNA was undergo cycle sequencing and sequence using the universal primer. Total 910 bp sequence and blast again the NCBI Data base the sequence was matched 97 % homologous with Bacillus subtilus DSM strain 10. The sequence is deposited with the accession #   KJ607888.

Growth of the Microorganism:

Bacillus subtilus was grown in glucose yeast extract peptone medium (GYP) of pH 7.5 containing 0.02 % Cacl2, at 55 0C for 19 h. The cell mass was isolated after 19 hrs of incubation time and washed with phosphate buffer and processed further for isolation of the enzyme.

Preparation of the spore suspension:

Spore suspension is prepared and stored at – 20 0C as a glycerol stock for further studies.

Preparation of the inoculum:

50 µl spore suspension, was inoculated into 50 ml of Glucose Yeast Extract Peptone medium of pH 7.5 at 130 rpm for 10 hrs and used as a inoculum for production of the enzyme.

Production of the enzyme     :

Production of the enzyme was carried out using glucose yeast extract peptone (GYP) medium of pH 8.0. The GYP medium was inoculated with 5 % inoculum and incubated at 55 0C under shake culture condition for 19 h. After 19 hrs of cell growth, the cell mass was harvested using centrifugation at 12,000 rpm for 30 minutes. The cell mass was used for isolation of the intracellular topo like enzyme. The enzyme characterization is under progress.

Isolation and purification of the enzyme:

Isolation of the enzyme was carried out using the lysis buffer. The cell mass was treated with the lysis buffer and then kept on ice for 30 - 45 min. The cell mass was repeatedly suspended and vortexed. The cell debris was seperated by centrifugation. The supernant was collected and dialyzed in 10 mM phosphate buffer pH 7.0 for 3 - 4 hrs at 10 0C with changing the dialyzed buffer at 1 hr of interval. The dialyzed supernant was loaded onto the DEAE-Sepharose, which is pre-equilibrated with 10 mM phosphate buffer of pH 7.0. After sample loading, the column was washed with two column volume of 10 mM phosphate buffer of pH 7.0 and then eluted with 0 - 500 mM NaCl gradient. Fractions of 0.5 ml of fixed volume were collected. The column fractions of enzymes were analyzed on the 12 % SDS-PAGE gel (Fig.1).The middle band of the protein was eluted from gel, dissolved in the 10 mM Tris buffer and loaded on the gel for purity of enzyme (Fig. 2). 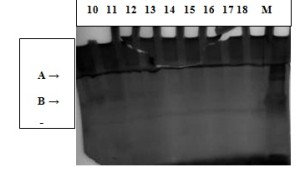 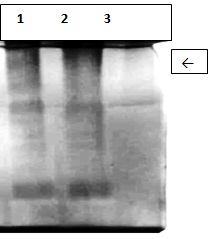 The enzyme activity patterned was discribed. The enzyme samples which was collected from column fractions were again gel purified. The gel eluated enzyme sample was used for restriction pattern studies by using the standard pUC18 and pPIC9K plasmid. Activity of the enzyme was defined as 1 μg of pUC18 or pPIC9K plasmid DNA was cleaved, within one hr at 37 0C

Substrate based pattern of conformation:

DNA – Topoisomerase like activity is observed. The pPIC9K and PCR amplified 16S rDNA was used as substrates. The incubation time was 1, 2 and 3 hrs. After incubation the samples were run on the agarose gel. The clear shifting of the band pattern is observed in the fig. as opti time the complete shifting is observed. It also cleared from the pattern of the study on the closed circular plasmid that it cut at only one site and unwinding of DNA was observed.

The substrate used for the activities were pPIC9K, pUC18, genomic DNA, 16S rRNA. There confirmation pattern were listed in the Fig 7, 8 and 9.The  supercoil conformation of DNA substrate assay for the topoisomerase like activity of various DNA substrate of super coil conformation to relax forms were observed.16s RNA amplified DNA sample the same species was used as substrate for the activity. The super coiling of partely observed as shown in the arrow also position of the substrate also observed as shown in the arrow

RESULTS AND DISCUSSION: Topoisomerase type of endonuclease from themophilic Bacillus sp wasisolated. The crude form of the enzyme was extracted. The enzyme was purified using column chromatography and in gel preparations. The activity of both partially and gel purified enzyme was determined. The gel purified enzyme was checked on the 12 % SDS-PAGE (Fig. 2). The restriction patterns of plasmid DNA using isolated enzyme are shown in Fig. 3, 4 and 5. 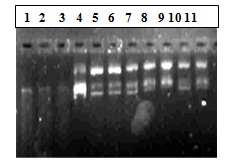 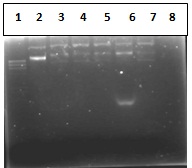 Isolated topoisomerase like enzyme cuts the super coil plasmid DNA into the relax form. The supercoil plasmid DNA was observed in relax form (Fig. 6). Such type of activity of single nick was reported from topoisomerase type I type of enzyme 10 (Zhong et al 2012). The characterization, purification and inhibitory studies of isolated topo like enzyme needs to explore. Likewise Productionand purification of fibrinolytic enzyme was carried out using lab scale fermentor 11. 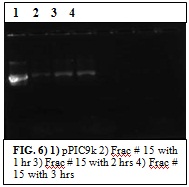 CONCLUSIONS: The endonuclease like topoisomerase is isolated and showed activity pattern on different substrates, further characterization of enzyme is needed.

ACKNOWLEDGEMENTS: Authors are thankful to Director of ARI for financial support to research work.